We holidayed in Burgundy for several years when Ben was younger and one of the delights of the area we stayed in (near Montbard) was the Canal de Bourgogne and the Brenne valley, which we used to walk and cycle along, going further afield each year. So the walk along the canal between Pencelli , where we were staying, and Llangynidr was something of a nostalgia trip. Level easy walking in shade and with the entertainment of canal traffic, with enough people around to be sociable. The bridges where the mineral railway crosses the canal, close to the Star Inn Plenty of shading along the canal

We set off from Cornwall Farm near the Pencelli church, just South of the village, and walked North along the footpath to the canal bridge close to the Royal Oak pub. Once on the canal towpath we went East bypassing the village and along an attractive stretch of canal overlooking the Usk valley. This leads to the village of Talybont-on-Usk where the road crosses the canal up to Aber and the reservoir, the village has good facilities with a store that sells hot drinks and two pubs (The Travelers rest and The Star Inn). View across the Usk 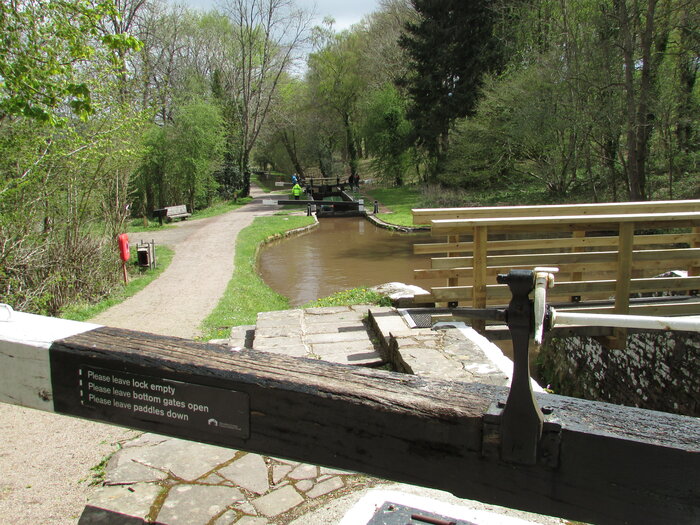 Keeping to the canal we went past the old wharf where the mineral railway, that is now part of the Taff trail, terminated. The canal contoured the valley and came to a flight of lochs that were busy. Further on we reached the village of Llangynidr and the Coach & Horse pub, whose beer garden sat invitingly on the canal side; we crossed the bridge and took advantage of their hospitality. View over canal from South The trackway up the North side of Tor y Foel Pen Allt-mawr and The Black Mountains Looking North along the Taff Trail towards Talybont village

The return trip took us back towards Talybont but we left the canal as it veered to the right, across the bridge and up a signed farm track, shown on the map as Usk Valley walk. This passed between the hill of Tor y Foel and the ancient earthworks behind Upper Wenalt. Over the crest of the hill the path met a by road and then down left across open fields until it met the Taff Trail running North-South along the upper slopes of the valley above the Talybont reservoir. This was hard going as the Trail comprised of smooth granite slabs of the mineral railway. Looking North along the Taff Trail towards Talybont village The path down to the stream The hill with the ancient fort above Talybont village, point 356

After about 2 Km heading North on the Taff Trail we took a path down the slope to the left which led to a footbridge across the Caerfanell river. The path hit the road opposite Aber Farm and a right turn brought us to the path West across fields and up the lower slopes of Bryn. The route undulates and crosses two minor roads, dipping into the wooded slopes above and then following the lower edge of the tree line on an ancient sunken farm track, with steep sides and old hedges of hawthorn and oak. The Usk way above Pencelli The local residents out for a stroll

After about 1 Km in open country the track crosses an East-West footpath and turning left there is a hedged farm track which leads directly through Cornwall Farm, if you continue on through, a go right at the next path junction, you end up at the Church car park after about 1 Km.