My brother Scott, Paul and I decided we should tackle a tough, long route seeing as we all had the Friday off. We left the central belt at 6am and arrived at the Glen Nevis car park (the end of the road car park) around 9.30am following a wee (pee) stop at the green welly! Weather was decent to start, a bit parky but nice and fresh and just what we needed after the long drive.

We headed from the car park towards the crossing which is, contrary to popular believe, a wee bit scary. I decided to take this on as the thought of wet feet put me off wading through the river - the others decided to take on the later - and fail miserably... After this section there is a tough slog over the foot of the waterfall, over the marsh land and then up the first Munro, An Gearanach. From here the views are spectacular and you can really appreciate the walk ahead.

We then followed the well trodden route towards the second Munro Stob Coire a'Chairn. This was a tough one that really knocked the stuffing out of us. The scramble at the end is relentless and parts of the route are quite loose.

The rest of walk from here is pretty straight forward although the decent from Sgurr a'Mhaim is tricky with all the scree. I would advise leaving a gap between when descending so that you dont take out your friends with boulders that you knock loose! My brother twisted his knee at this part so the decent took longer than expected, approx 2hrs.

One thing that worried me was when we were half way down we met a young couple who were making their way up. Dont think they realised that the sun would set in 30 mins. i did mention this to them but they persevered with their climb. Hope they managed to get back down safely.

Here's a few picks that will hopefully help with the description, enjoy! 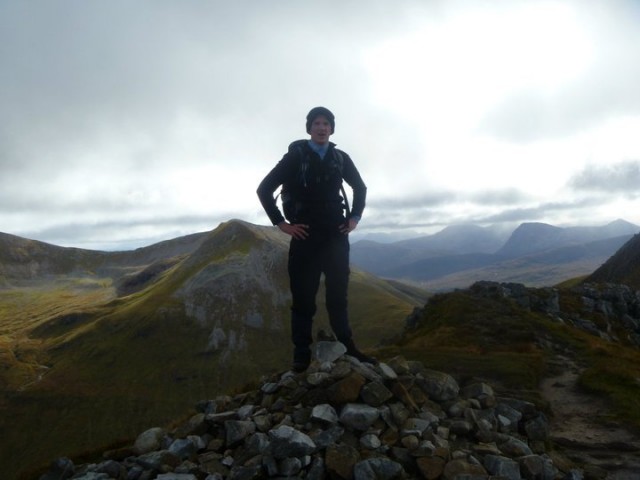 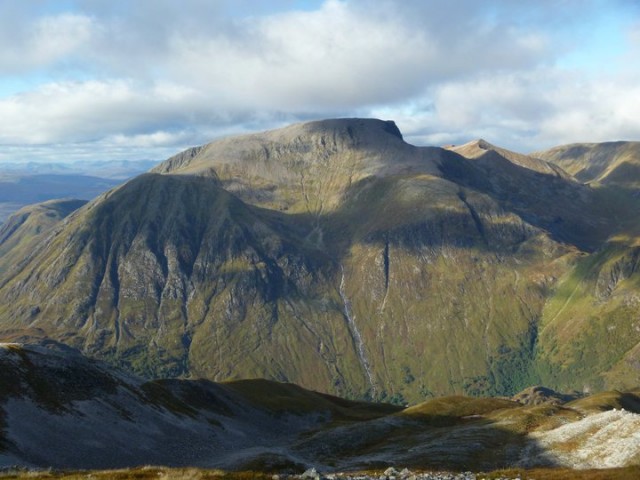 Excellent photos there chaps, looks like a brilliant mountaineering adventure!

great Photo's...we did the ring of Steall earlier in the year...got much worse weather than you, hardly saw any views and got raied on for 8.5 hrs...

looks like the rope bridge is fixed now...it was broken when we took it on.

I thought the gearanach garbanach ridge was harder than the devils ridge in terms of scrambling, what did you think? its a great route though and felt a lot longer than 14Kms...although we did it the other way round to you and i wouldnt have fancied your final descent much either...although the descent from Gearanach wasnt great either...

Some guy told us in the pub the night before that the riong would take us 5hrs...either he was way fitter than us or he had a few too many brandies!!!

Mark, I must admit that the Devil's ridge was the easiest of the two, both really easy compared to the Aonach Eagach which we done a few weeks back - that was something else!

I think that guy in the pub must've had a few in him when he told you that! It took us about 9.5hrs but with the weather we had we made the most of the summits and soaked up the scenery.

How do the ridges compare to the CMD arete between Carn Mor Dearg and Ben Nevis? I have done that 3 times now and am looking for a slightly tougher scrambling challenge, though am not up to the Aonach Eagach yet...

Great photos and what a lovely day! Ben Nevis and Carn Mor Dearg look great in the sun!

hell would have to freeze over before I attempt any thing this scarrey, you brave, brave soul...

Your second last photo is great. When you stopped at the green welly didn't you have a bacon and blackpudding roll with brown sauce? Mmmm

Absolutely brilliant pics, Gwalke. I did this exact same route last year. Weather was very good but hazy so your pics are much clearer than mine. Agree about the bridge though. It scared the sh*t out of me.
Was way disappointed with the Devil's Ridge as it isn't even a scramble at all, just a path on top of a grassy arete. Don't have to use your hands anywhere as there are no rocks to scramble over, apart fron the three boulders in the middle which the path avoids to one side (I jumped over from one to three just to try and install a bit of excitement). I guess it gained its reputation in the Winter. For me, the CMD rivals Crib Goch for the best arete on the mainland and it's way longer than anything else. And it actually has rocks to scramble over!!

Cracking stuff & super photos, I particularly like #6 (but wouldn't want to be up there in a gale

Having been on, and turned back part way along, both CMD and the An Gearanach - An Garbhanach traverse, I would say CMD is more comforting! I only turned back 'cos I thought it would get bad after the first corner on the CMD when it went across the bit which presents a vertical side to the viewer - Richard continued with his hands literally in his pockets and later said there were no difficulties anywhere. He said it definitely didn't get harder after I'd turned back and I hadn't really been doing any scrambling to that point (although a bit was need to get round the corner). I haven't been near the Devil's Ridge so can only wonder what that's like. I found most of the traverse to An Garbhanach okay (but too airy for my liking) until I got to the slabs stood on end and then we couldn't figure out what to do. We saw a guy coming our way from An Garbhanach so watched what he did. When he set off round the side of the sheer crag on a tiny sheep track I turned back! Richard did it though - he said it was definitely tricky and he also thought the descent to the next col looked too bad for me too.

Great photos though - just need names so we know exactly where you are!

It always makes me laugh when brave scrambly peeps are scared of the lovely Steall Bridge!

I wouldn't dare do half of that scrambling but love the bridge with a vengeance...

Pretty sure photo number 8 was taken on the decent from An Garbhanach heading towards Stob Coire a' Chairn.

I thought the bridge was excellent, probably one of the best bits of the walk. Getting onto the bridge is harder than crossing the bridge itself!

Ah thanks - didn't realise that bit was so rocky!