I nearly didn’t go out at all on Sunday for reasons I won’t bore you with. But I’m sooooooo glad I did.

This mountain has been on my hit list for a while but despite that fact I hadn’t really planned a route. I looked at the suggestion here on “Walk Highlands” and consulted the SMC guide but came to no decisions. In the end I did my own thing and was very happy with the outcome. Here’s how it went…..

Turned off the A828 up to the Forestry Commission car park in Gleann a’ Chaolais therefore starting at about 25 metres above sea level. Followed the track to a point where a sign post indicated up to the left for Sgorr Dhearg and up to the right for Sgorr Donuill. Flipped a coin and headed right for Donald’s Peak. Followed the forestry track up to about 280 metres. It turns sharp left and over a flat concrete bridge. Just before the track crosses the bridge there is a clear, well made walking path up in to the trees to the right. It’s an obvious path and the remains of a signpost are there by the side. I took this path and followed it up the west side of the burn through very pleasant forestry. Emerging from the forest gives a clear view up a steep corrie leading up to the western shoulder of Sgorr Donuill. Pick any one of two or three routes to the top. I tended to the right and emerged on to the shoulder at about 750 metres. Turned left and made my way to the summit of the first Munro peak at 1001 metres.

I had real trouble figuring out how to work my new camera so I got very few decent photos. However the views from here are excellent. It was a bit of a hazy day so couldn’t see too far. On a crisp clear winter’s day this would have been utterly phantasmagorical!! Never the less the views west and south to Ardgour, across the Firth of Lorne and south towards Mull were grrrrreat.

The route from here across to Sgorr Dhearg is well described in any guide book and it’s a pretty clear path. The decent to the beallach at 757 metres is good fun but for the most part the climb back up the other side to the second peak is a bit of a drudge. However it’s well rewarded with, again, fabulous views – this time towards Glen Coe, up Loch Leven and over the Mamores to Ben Nevis. By this time I’d sorted out my camera problems and got a few decent pics.

In descent I went back down to the beallach and headed down the corrie, this time on the eastern side of that big buttress which sticks out northward from between the two peaks. The path took me again into the forest following in the footsteps of previous walkers. For the most part this was OK but in one or two spots I was up to my calves in mud! Still it’s all part of the fun. Eventually I stepped back out on to the forestry track which took me down the east side of Gleann a’ Chaolais. I was lucky to spot a way marker which led me across the glen and back to the first Dhearg/ Donuill split and thence to the car park.

Total ascent on this walk is about 1250 metres – a fair old treck. Add to this that the fact I was in a funny mood - I just got my head down steamed ahead to the first summit without a single break. As a result my legs are still aching today, 48 hours after getting home!

What a bloody great day out though. I’d recommend it. I’ll certainly be going again. Bidean nam Bian...... amongst other things! Looking down the north ridge of Sgorr Dhearg to North Ballachuilish. This couple had come up the route which I think is recommended in "Walk Highlands" from the village and up the ridge of Beinn Bhan. 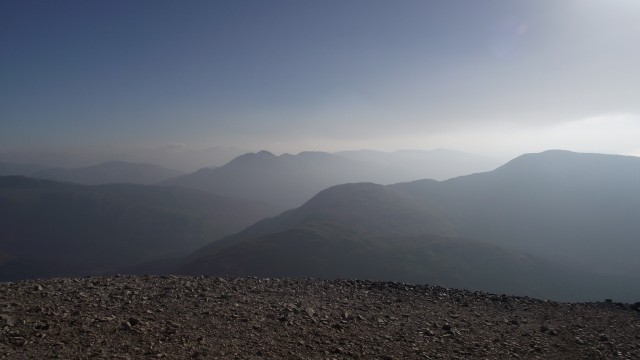 Southwards to Ben Starav at the foot of Glen Etive Looking back to Sgorr Donuill from Sgorr Dhearg - just visible in the haze is Garbh Bheinn of Ardgour.

Re: Bloomin' brilliant Beinn a' Bheithir

love these pics.... they're grrrrreat

how long did this walk take? good walk for a camp out?

Re: Bloomin' brilliant Beinn a' Bheithir

I took me just under six hours in total. That included a 20 minute stay on each of the two peaks and slow progress through the forest on the way down.