So after last weeks excellent walk at lochearnhead Rick and I agreed to meet up this morning at Inverarnan to tackle Beinn Chabhair. All was going to plan with a coordinated arrival at the Drovers Inn succesfully completed at 0915 and the rain holding off (MWIS and BBC News 24 were promising some sunshine of sorts through the day - lawsuit to follow for false advertising!!), however this "operating to plan" did not last very long at all. As per the WH walk report we attempted to go round the field to avoid going directly through the campsite at Beinglas Farm. We walked along the edge of the field and then found the path had turned into a substantial burn! A little back tracking followed until we eventually found a fairly narrow part of the burn and jumped across. We then missed the stile and started heading along the west highland way for a bit. Second back track of the day and it was only 20 minutes since we had started walking. Next mistake was to try and head up the right side of the burn which resulted in the third back track of the day. Had we known at this point that the day was to be scattered with little back tracks here and there and one big one at the summit I suspect the white flag would have been raised followed by a return to the Drover's inn for a hearty breakfast!

Anyway we finally got going up the climb which although absolutely stunning with the burn in full flow was very strenuous with difficult conditions under foot.

The next part of the walk across the boggy moorland was a complete nightmare. It was so difficult to stay on the path which had been badly broken up by the heavy rain in recent days and the walking conditions required full attention all the way. Even so we lost the path a number of times. We finally turned off north on the path which climbs up to the ridge west of Meall nan Tarmachan. At this point I was completely knackered and felt as if I should have already climbed 2 munros!! Rick (the Mountain Goat) seemed none the worse for the tough conditions and in fact I pretty much only saw the back of his head from a distance for most of the climb

We finally reached the summit at approx 1.10pm, took a quick photo (thanks to very obliging French guy who seemed to be wandering about aimlessly in the mist) and started to head back down. (cloud cover was heavy so there was really no point hanging around up there). After approx 200 metres of the descent we bumped into an older couple - probably in their 70's- who we had met in the car park. We stopped to have a chat. The old gent then hit us with the sucker punch!! " there are 2 cairns and the summit is the second one further on" Well Rick and I couldn't remember seeing two cairns! After a bit of debate and some cursing we decided no option but to head back up...we did threaten the old chap (in a good humoured way) with serious harm if he had got it wrong

So up we climbed again - see walk route! - and low and behold what did we find about 50 metres before the summit but the first smaller cairn which we had walked right past without noticing the first time. I have decided that although good natured and well meaning, neither Rick nor I are the sharpest tacks in the box!!!

Now as far as the walk down goes all I'm going to say is that you have to expect tall people to fall once in a while! Actually I only hit the dirt (boggy ground) twice (using poles) versus Rick once (no poles). The issue being that when I go down it is usually spectacular. Rick certainly enjoyed my fall.

[youtube]http://www.youtube.com/watch?v=R7REqsTmUfQ[/youtube]
We finally made it back to the Drovers at around 4pm where we had a well earned drink! looking up from the car park 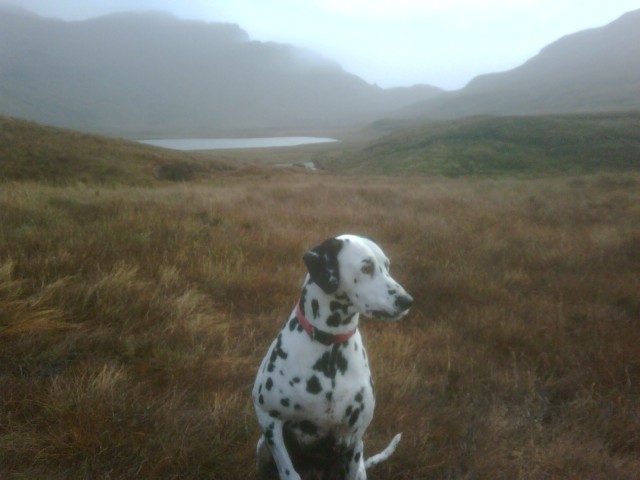 Rubygirl in a usual pose yes it was the summit - we hope! 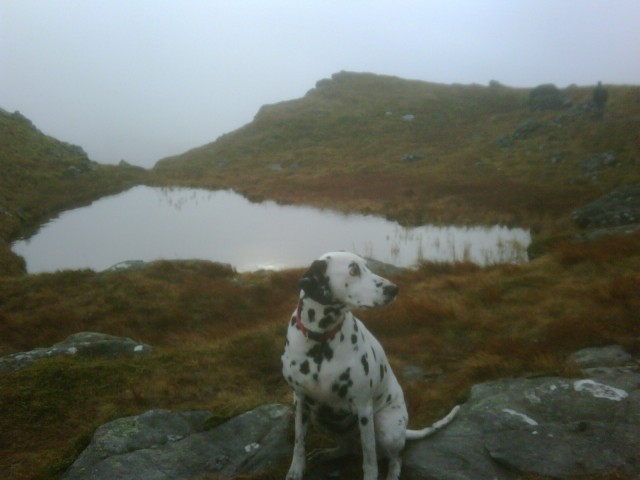 back down - think Ruby wants a pint!

I have to say that I found the whole walk hard, boggy and not really that enjoyable! But then I mistakenly did all those little hills on the left on the way in (the ones to the north on your map) - I was thinking they counted as something but when I rechecked after getting back, I found they were only Corbett 'tops' or something!

Due to me being super-cautious in the hills, despite being tall I didn't fall at all on that steep descent. It's a horror though - more or less 1000 feet in a very short distance!

You both did the walk twice, only to find you had got it right the first time

Bet the dog was confused

MC - I can't imagine how tired I would have been if I had climbed all those other "little hills" you must have been exhausted!

not sure I want to go walking with you after all !!!

Yes, it does sound like it was a good laugh, 2dalmatians

I was absolutely exhausted... the Munro just never seemed to get any nearer. It was a really funny mix of weather too - red hot sun so boiling in the sheltered spots then, when you popped up onto the summit of one of the little hills, there was an Arctic blast hit you so I was putting clothes on and off all the way. But each summit I popped up onto, there was the Munro looking just as far away as ever and I started to think that this was one of the Munros I wouldn't make and that I'd have to turn back. Luckily, when I finally reached the little col where the path comes up to, the path up the actual Munro seemed so easy after the pathless and steep stuff I'd been doing that I recovered my strength and humour quite a bit. But it really was a bog-fest back down the valley on the normal route...

I didn't write a report as it would have seemed so negative against everyone else's glowing reports on it at the time...

HI 2dalmations,
So much for the sunny weather forecast on Saturday

So you liked this hill so much you done it twice

Nice report despite the weather ! I made the same mistake yesterday, ie trusting the forecasts

We had read that you could not take dogs on the path up Beinn Chabhair from Beinglass Farm. We are always in the hills with our border collie and were wondering if you came across any problems on your posted walk.