After a couple of failed attempts, I finally got the chance to meet up with Cuillin for a walk, as well as RCFC. We set off earlyish from Inverness and were parked up near Glencalvie Lodge not long after 9am. It was chilly but the weather forecast had been correct - wall to wall sunshine!


Alladale.gpx Open full screen  NB: Walkhighlands is not responsible for the accuracy of gpx files in users posts

We set off up the track to the lodge at about 9:20. The track was very well maintained, and passed through lots of attractive woodland, with glimpses into the impressive river from time to time. Before long we were climbing slightly to Alladale lodge, a reasonably majestic pile.

Looking up Alladale from the start of the route: 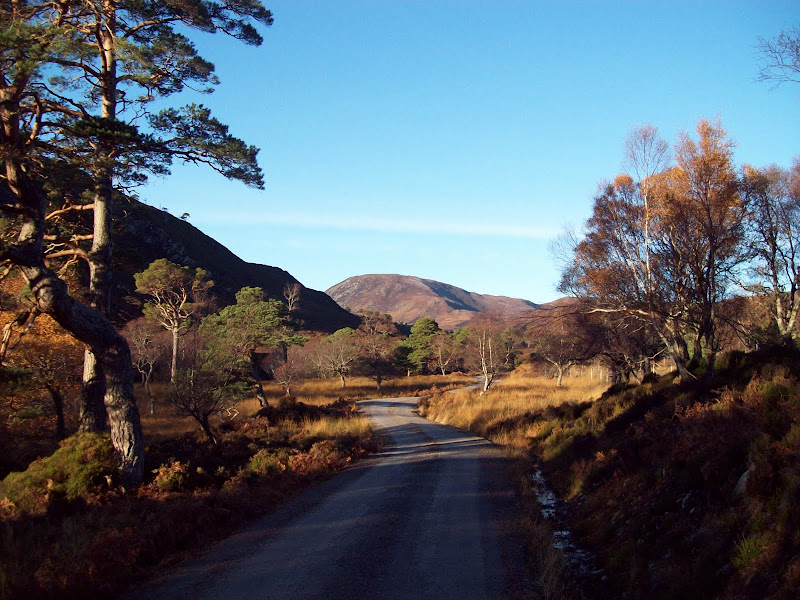 The MFI lodge - doesn't appear to be made of low grade chipboard! 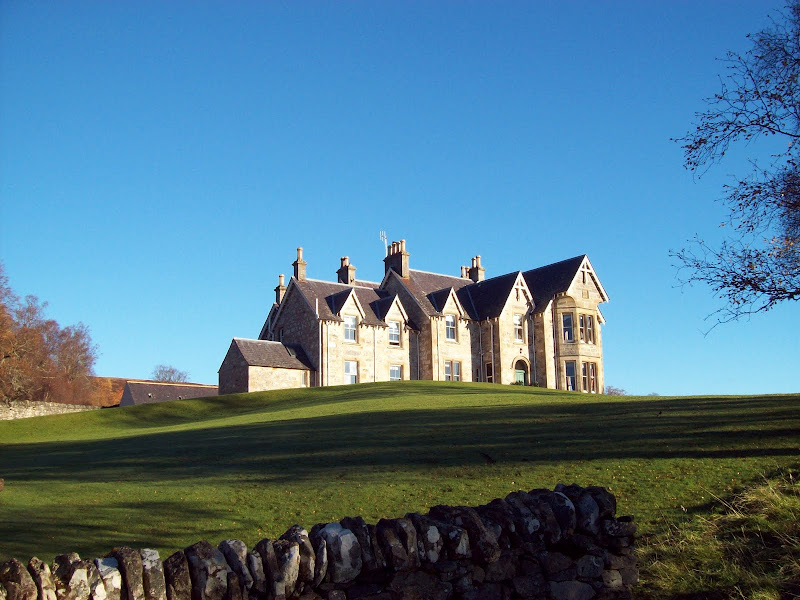 The track drops again after the lodge, running alongside the infamous fence. No access issues for our hill, but some rather ugly scars where the plant had been in to install the fence. Hopefully that will grow over eventually.

Past the lodge - Carn Alladale on the right: 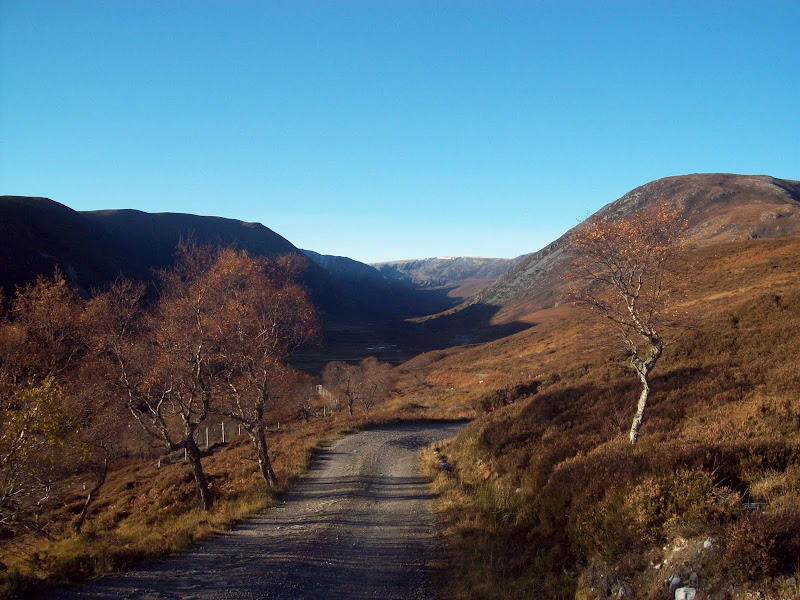 Further down the track were a couple of holiday cottages and the power house of a small hydro scheme. A very pleasant spot, but not quite the wilderness experience that Mr Lister seems keen to promote. Looking further up Alladale, there was a dusting of snow on the higher hills making up the headwall. Carn Alladale was a nice bit of hillside, but didn't quite live up to the rocky buttress shown on the map.

Just after the hydro scheme, we hit the heather and started ascending towards Carn Alladale, After a short section of springy heather, the going became fairly easy, and before long we were getting our first views over to Beinn Mhor Coigach and Cul Mor. Views back to the east coast were also opening up.

Looking back east from the ascent of Carn Alladale: 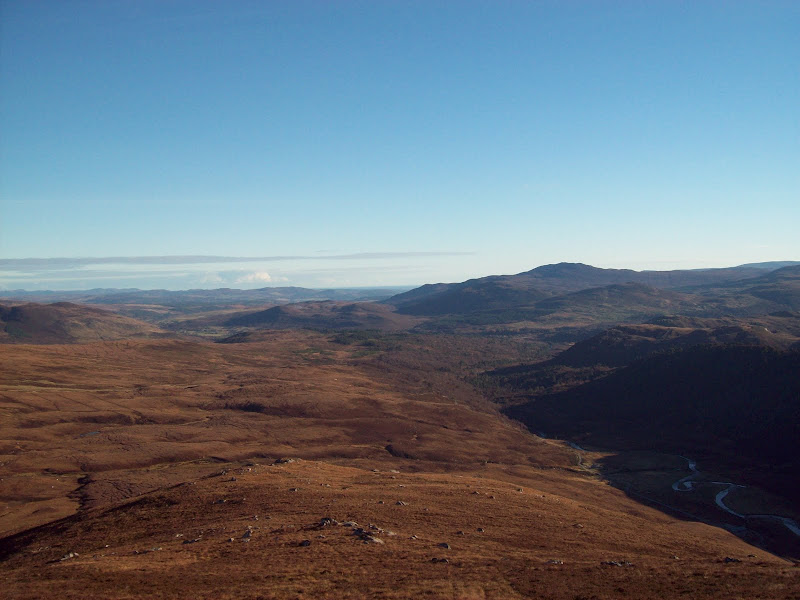 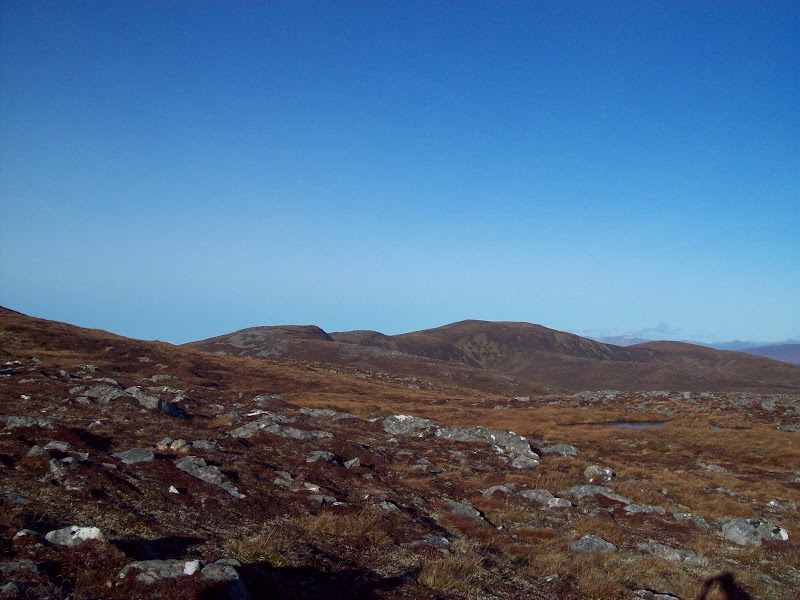 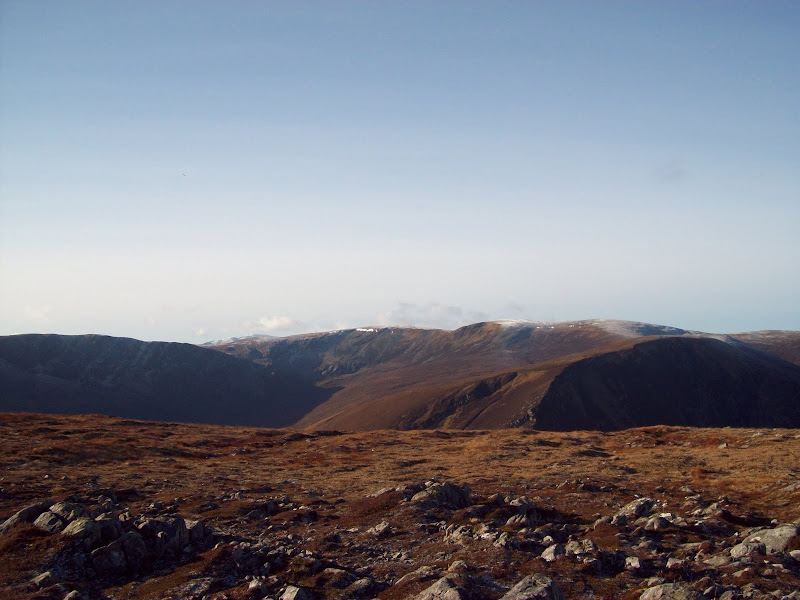 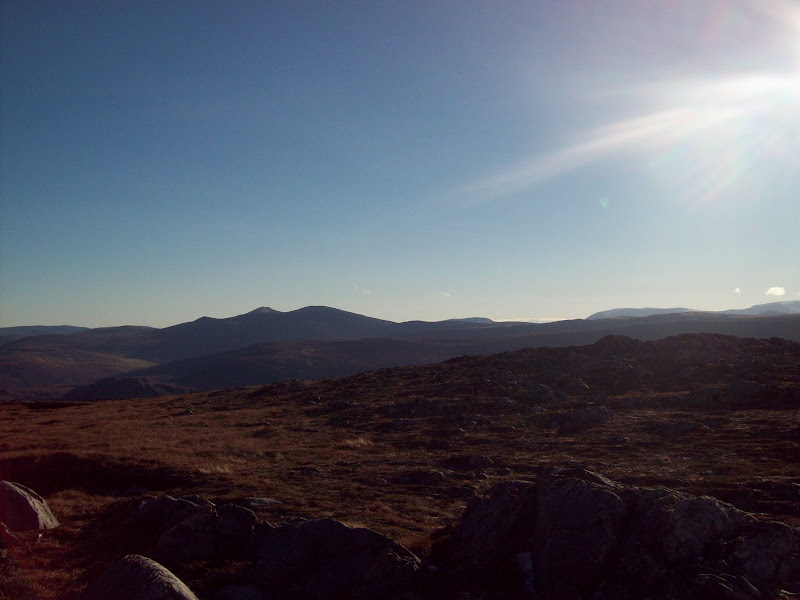 The route to the summit of Carn a' Choin Deirg was a very pleasant high level traverse, although there were a few ups and downs along the way. The breeze felt really icy and cutting at this point, making stops fairly brief. 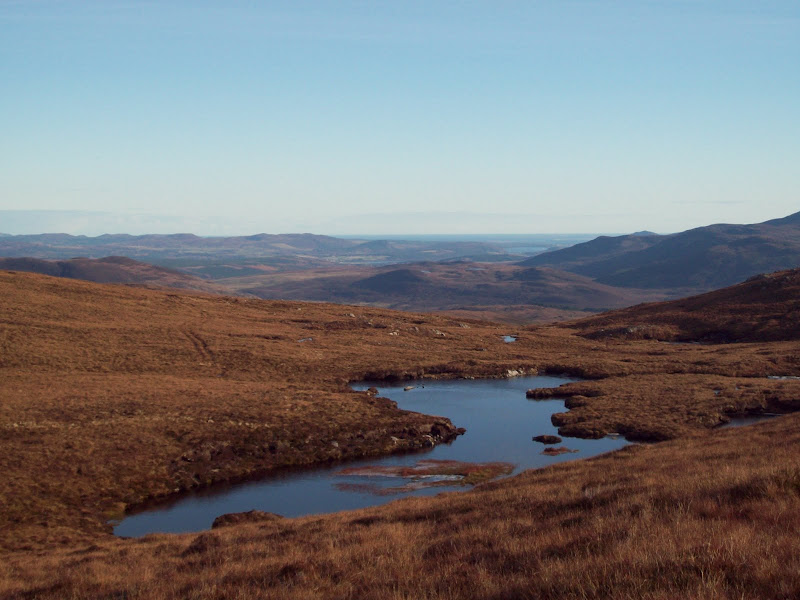 We passed a strange boxed off area of ground on the ridge - can only assume it was to keep deer off a patch of grass to monitor plant species. 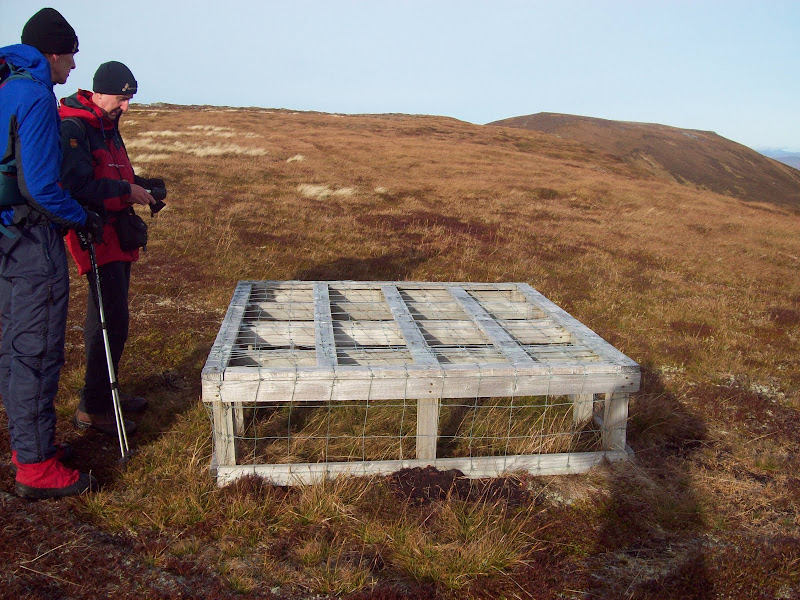 Views west remained good, with Beinn Ghobhlach, An Teallach and the impressive N side of Seana Braigh being added to the panorama. An Teallach had a surprisingly low snowline - the recent showers must have been fairly inconsistent over the hills. 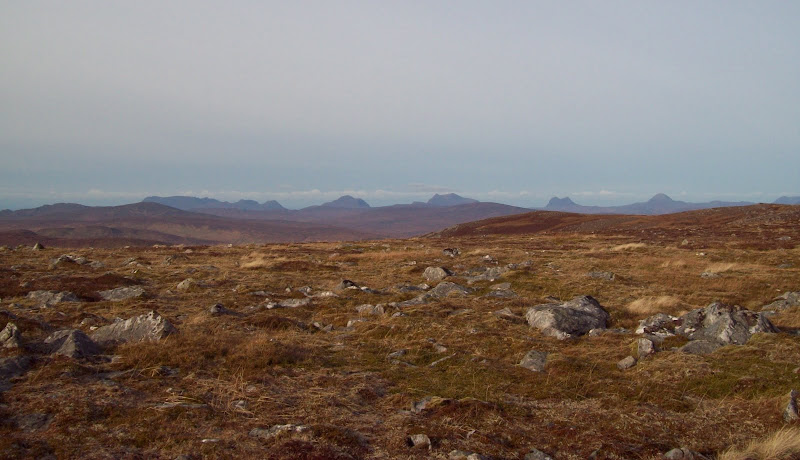 Seana Braigh and An Teallach: 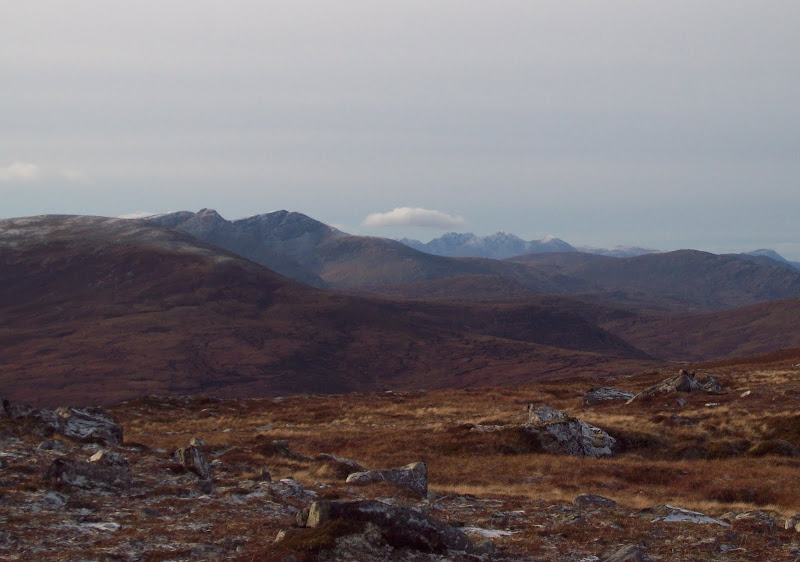 The final climb was on the lovely short heather and springy moss which you get so much of in the far northeast. We stopped just N of the summit, but after 5 minutes, our fingers were numb, so we opted to carry on.

Last slope to the summit of Carn a' Choin Deirg: 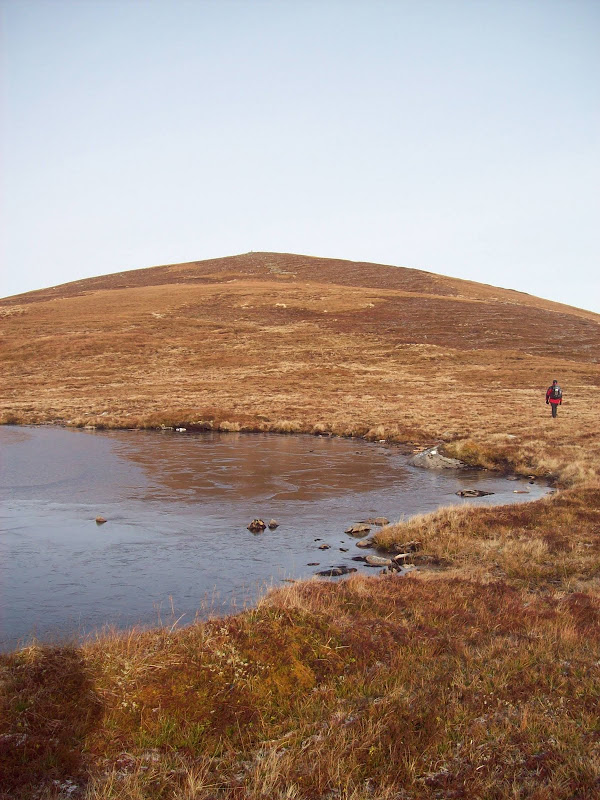 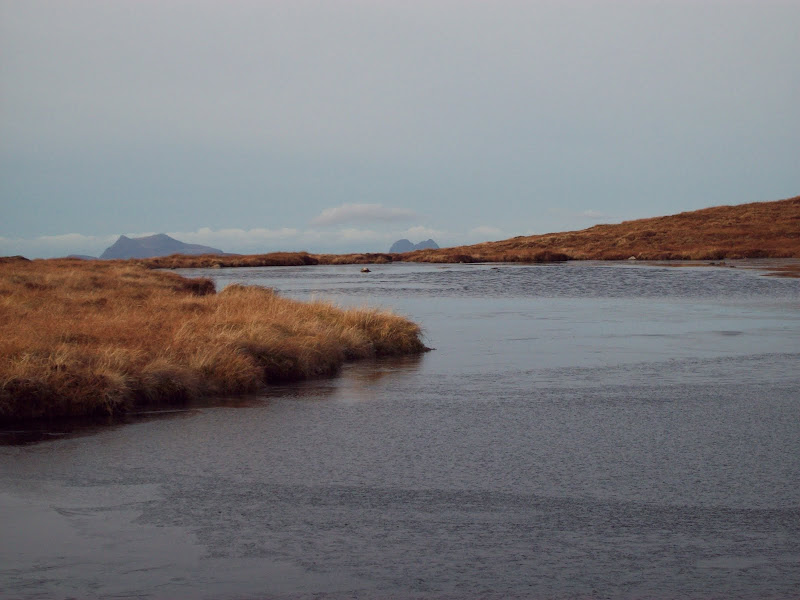 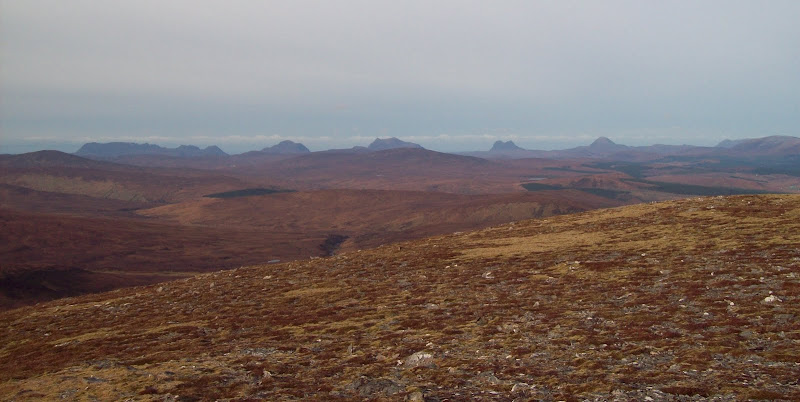 On the map, the obvious route back looks to be over Carn Beag and down the SE running ridge towards the lodge. However this looked very hag ridden and boggy, so we dropped down a shorter spur towards Loch an Tuill Riabaich before following the Allt Riabhach back down to Alladale. Parts of this were boggy, but the going was easy enough. 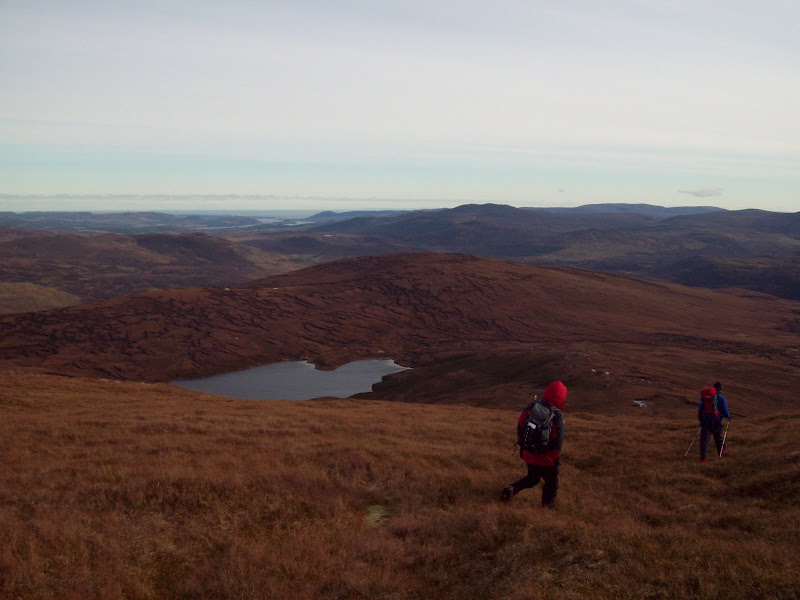 Lower down the corrie, the estate had gone to some effort to replant some native trees. These were very much in the early stages, but will probably look great in years to come. On the other hand, we stumbled across the weir for the hydro scheme and discovered it was taking all of the water from the burn, leaving the watercourse immediately downstream completely dry. Maybe a minor thing in the great scheme of things, but makes you wonder where the estate's priorities lie. 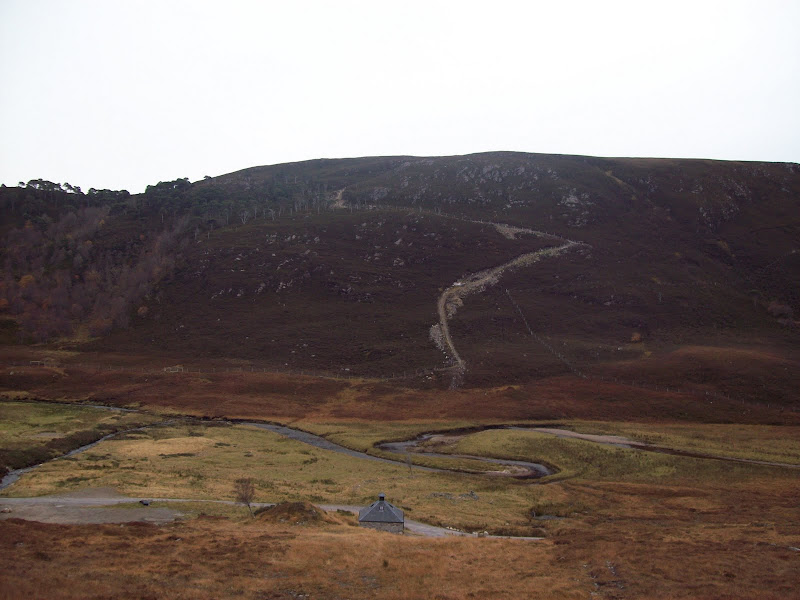 It was certainly a great day out, with straightforward walking and some of the best views the far NE has to offer. From the summit you get a sweeping vista round from Morven past Ben Klibreck, Ben Hope, Ben Hee, Ben More Assynt, the Inverpolly hills right down to An Teallach. Also despite the reservations many people may have with Mr Lister and the Alladale Estate, it is very beautiful, and a lot has been done to restore native woodland. It just seems that with his fenced enclosure and his bizarre plans (not to mention his badly run hydro scheme) that he can be somewhat misguided at times.

looks like you had some decent weather up there

Nice report and photos - I'd agree with alan s, looks like today's weather was better than yesterday. In the photo called "The Great Northwest again" could you tell me if I'm right in thinking that you've got all of Stac Pollaidh, Cul Beag, Cul Mor, Suilven, Canisp and Quinag on the far right please ?

I was already a mountain coward but the thought of being chased around by those things when they bulldoze the fence and get out doesn't bear thinking about!

Wow malky, a quality TR turned round in double quick time after our walk!

You've captured the day brilliantly and we were so lucky to get the stunningly clear start to the day, albeit we paid for it at the summit with a perverse Arctic blast from the south.

Like you, my overall impression of the estate was more favourable than I had expected and there really aren't any access issues when approaching from Glen Alladale.

Well whoever organised the weather for that trip deserves a pat on the back.
Its good to be sociable and walk with folk instead of by yourself all the time.
Another very good, well organised mini scottish hills meet.

footie ed wrote:Well whoever organised the weather for that trip deserves a pat on the back.

Cheers for the great weather, not often it works out like that!

Cuillin wrote:Wow malky, a quality TR turned round in double quick time after our walk!

I've decided (somewhat stupidly) to write up everything I do this year, so if I didn't do it straight away, the reports would soon pile up. I look forward to seeing your take on things on SHills soon

Cheers both for the company - nice to be walking with other people for a change, could get used to it

Everyone else - cheers. Certainly was good weather. MC - are you sure about polar bears? Funnily enough my wife mentioned something about this, but I thought she was talking about a wildlife park down in the Aviemore direction. Going to read up on that for sure.

rockhopper wrote:In the photo called "The Great Northwest again" could you tell me if I'm right in thinking that you've got all of Stac Pollaidh, Cul Beag, Cul Mor, Suilven, Canisp and Quinag on the far right please ?

Almost. On the far left is Beinn Mhor Coigach. You can't see Stac Pollaidh as it is hidden (behind Cul Beg I think). The rest of it you are correct on - I think that is a corner of Quinaig poking out on the right, although is is mainly hidden by Braebeag in front.

. Been a long time since I've been up this way and must re-visit it soon.