This is going to be a long essay... OK, I'll try not to be boring.
Actually, can anyone be bored by the magnificent Beinn Eighe?...
My first experience with THE BEN (as I call it sometimes

) was in March 2008, when we visited Coire Mhic Fhearchair. I was overwhelmed by the majestic Triple Buttress and the stillness of the loch. And since that day I knew, I had to conquer this mountain - I fell for it, I was under the spell and I couldn't get it out of my head.
We kept coming back to Coire Mhic Fhearchair every spring (once in February, when it was completely frozen), but somehow I couldn't get myself motivated to walk the whole hill. My husband, who had done Beinn Eighe twice before, wasn't in a great hurry, either. But eventually last August we got around to climbing THE BEN - I simply couldn't wait any longer

The best starting point is the car park west of the bridge over the Allt a'Choire Dhuibh Mhoir. From there, a good path took us immediately into the very heart of Torridon, when we walked between the steep flanks of Liathach and Beinn Eighe. I could hear The Ben's call in my head - the spell came to life again... The slopes of Beinn Eighe

The path crossed the stream and continued through the stepping stones to some small lochans, where it parted. At this point, we were captivated by the mesmerising view of Beinn Dearg and Beinn Alligin just behind it: The path then climbed up and as we traversed across the foot of Sail Mhor, more of the beautiful scenery came to view: The final climb of the first stage of our walk took us by some impressive waterfalls and to Coire Mhic Fhearchair itself. Here we couldn't resist taking a short break just to "breathe in" the scenery. It may sound stupid, but I felt like I was in the right place at the right time. This was my moment and I was living my life to the full. The spell of The Ben was certainly working 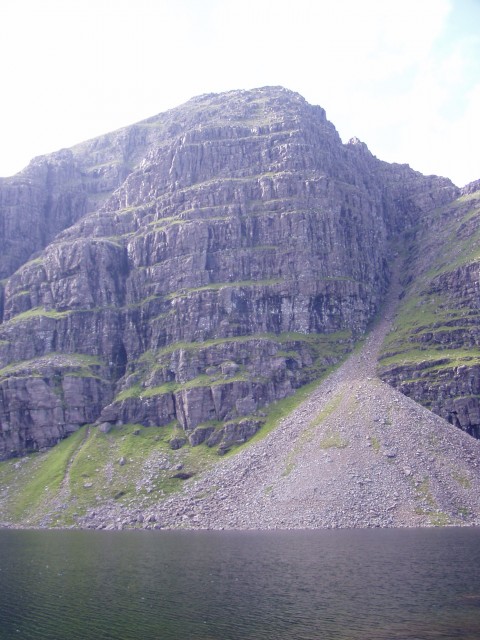 The slopes of Sail Mhor

Now it was time to face the final push to the top of the ridge. The path circled the loch and eventually we climbed more steeply towards the scree gully. As we gained height, Coire Mhic Fhearchair could be seen from a completely different perspective: A different look at the loch Looking up the slope

The gully itself is supposed to have a bad reputation, but I found it easier than I expected. Yet it was a great fun for me! I charged it without any hesitation and after a short push I was standing on the top of the ridge... speechless. What I saw was almost more than I could take Don't look down or your vertigo will kick in :P The Cat climbing The Ben

The spectacular view across to Spidean Coire nan Clach are second to none: Towards the summit of Ruadh-Stac Mor

After a few minutes of enjoying the scenery, we walked up to Ruadh-stac Mhor. The path was very rough at first, but it soon reached a plateau before the final short pull up to the rocky summit. As the highest top of The Ben this is certainly a fantastic viewpoint for most of the mountain range. The panorama of Torridon from Ruadh-stac Mhor The next stage of the walk was to come back to the bealach between the top and Coinneach Mhor and then a short, steep climb to the latest. From there, the best part of the route took us along the rocky cliffs to Spidean Coire nan Clach, the second Munro of The Ben. At some point I found an exposed bit of the cliff and posed for a few pictures there. I sent these to my dad and he almost had a heart attack

I have to be more careful next time... The Cat on a hot tin roof? Liathach from the summit of Spidean Coire nan Clach Looking back to Coinneach Mhor

Sitting on the top of Spidean Coire nan Clach, I knew it was time to say good-bye to Beinn Eighe, yet I still felt bewitched by The Ben. It was Kevin who finally woke me up and dragged down the Coire an Laoigh path... which was quite steep and slippery. The final part of the great day was the view of the southern flanks of the mountain as we descended into shadows... All that was left was now a short stroll along the road, back to the car park. An unforgettable day on the most magnificent mountain I've ever climbed... What else can I say?

Only done one of the Torridon big three and this has whetted my appetite even more!

Spectacular stuff, thanks for sharing. Know what you mean about being careful who you show what when you're doing walks like that