I was originally supposed to be in Dundee this weekend, so had hastily concocted a plan to do a rather attractive circuit on the north side of Glen Lyon. Looking back through the new hills done over the last 12 months, I realised this circuit would allow me to hit 30 new Corbetts and 30 new Grahams this year. A slightly OCD way to tie in with my 30th birthday later in December!

However it was becoming clear that we weren't likely to make it to Dundee this weekend, and even if we had, the hills I had in mind would have probably been unreachable anyway. I decided to make some new plans - ones which didn't involve being swept away in an avalanche. A quick chat with Marek (a friend from work) on friday and he was in.

Meall Dubh seemed like a good idea as a) it was accesible from a well gritted trunk road, b) there was pretty much zero avalanche risk and c) Bagger and Skog's recent reports had alerted me to the stunning views from the summit. The weather looked uncertain, but appeared to promise at least partial views. Sadly it was not to be!

I picked up Marek just after 8 am and drove straight into a snowstorm. Luckily this was short-lived and once over the Black Isle, things settled down somewhat. Roads were slushy but perfectly passable with a bit of care. We started walking up the south side of the River Lael, past Ullapool water treatment works, then over a bridge to the north side. Things were very white, and there was little promise of any sunshine. The works for the hydro scheme detailed in other reports were all complete, as was a new footbridge. 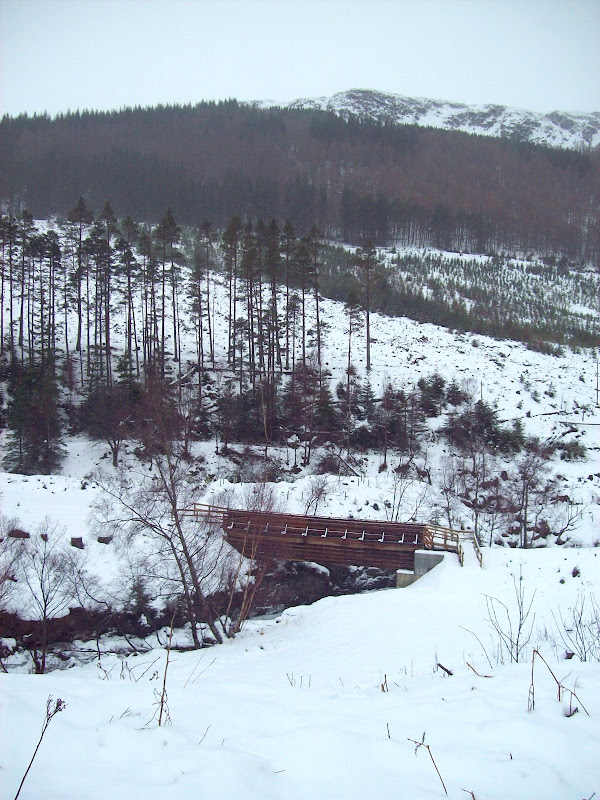 A shortcut led us up to the track onto the moorland. It was really just the original stalkers path, but planted over with conifers. At the edge of the forest, the track became covered with drifting snow. This was a sign of things to come! 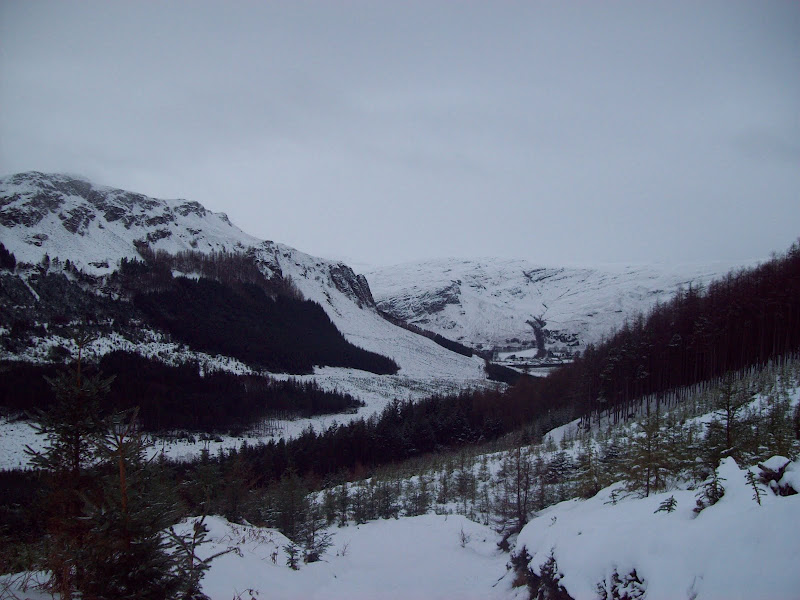 Ascending the side of the Allt Badan Seasgach, with some deer on the horizon: 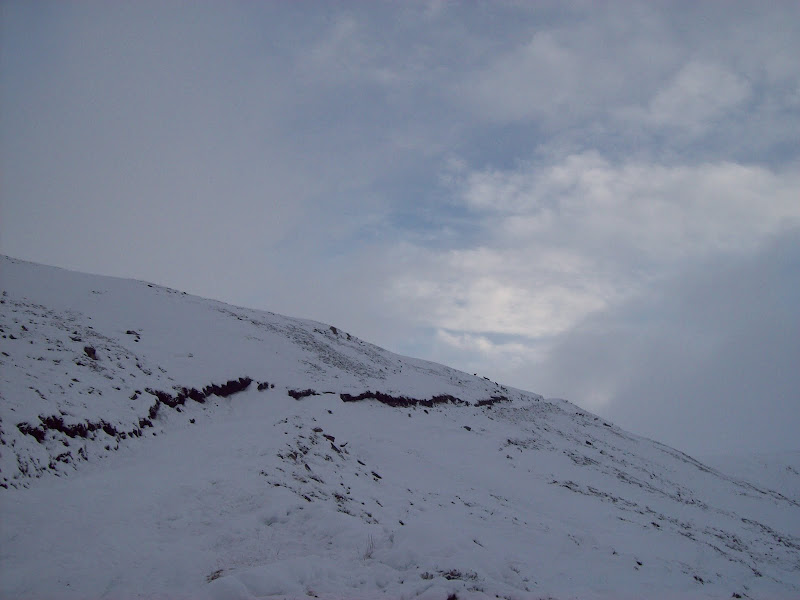 The track was easy enough to follow, but mainly by staying out of the centre, where the snow was sometimes knee deep. At the end of the track, we were into the cloud and the sensory deprivation chamber. Luckily there was the odd tuft of grass poking through the snow, so the white-out was not total. We took a bearing from the walled shelter at the end of the track for the summit. What followed was a tedious knee-deep wade through the soft snow, taking us about an hour to get to the summit from the track end. In fact did we even reach the summit? Who can tell? We were certainly in the right area, and on the highest point visible (admittedly very little was visible!), but we didn't see a cairn, which there does appear to be. Can't say I was too fussed though. The main purpose of the visit was for the views, of which we got none

. By application of the FUCIT factor, I'm happy enough to call the point we got to the summit. I'm sure the GPS wielding masses would beg to differ though

30th new Graham of the year: 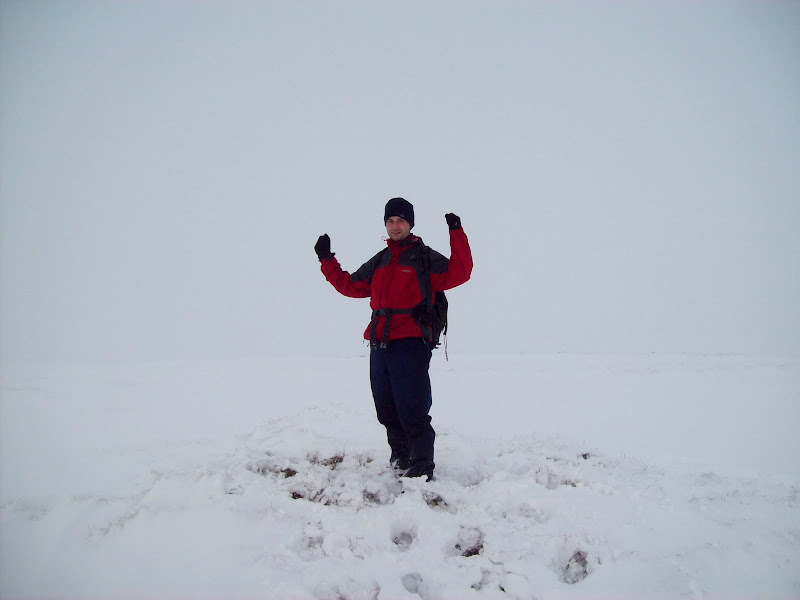 We had some lunch and hung around briefly in the hope of the cloud clearing (something it almost appeared to do at times. If we'd been a hundred meters higher we may well have had a stunning inversion!). Then we buggered off, using our footprints from the ascent to ease the navigation. 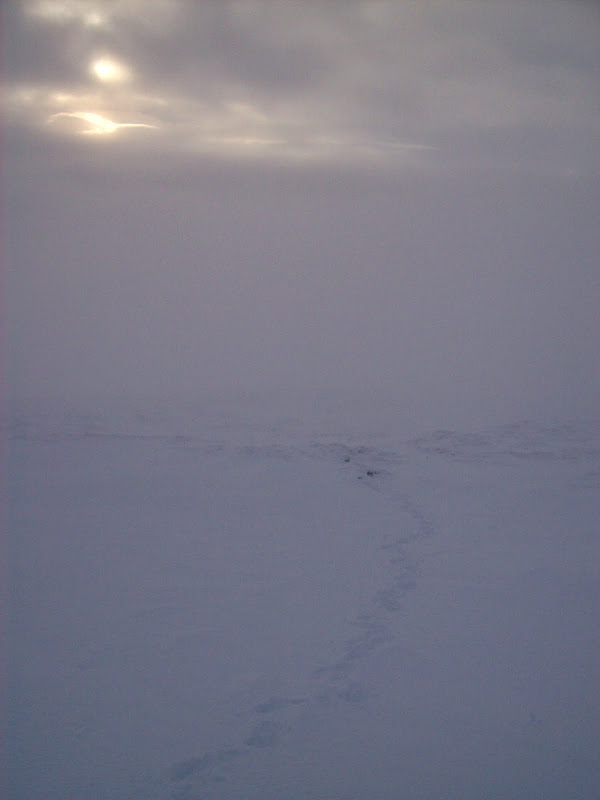 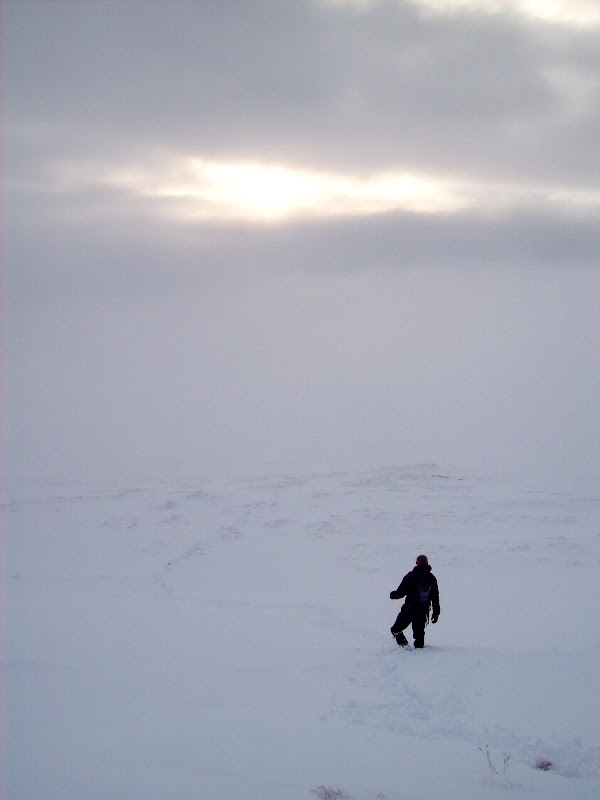 Some of the so-called views: looking across Gleann a Mhadaidh: 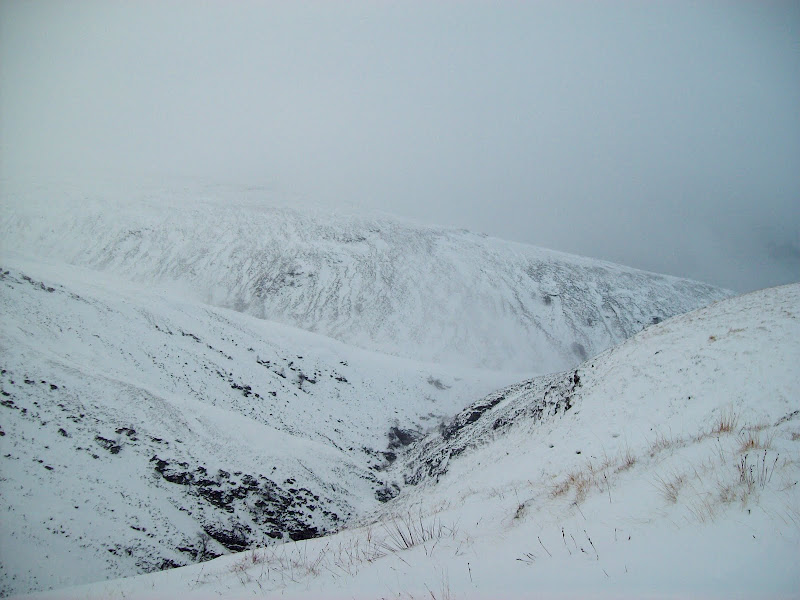 Back at the car, we were reasonably pleased with the effort, but disappointed not to see anything. Marek has now been out on the hills with me twice this year - both involved lots of knee-deep wading through snow (the other time being the most laborious ascent ever of Carn na h-Easgainn). Unlucky for some! 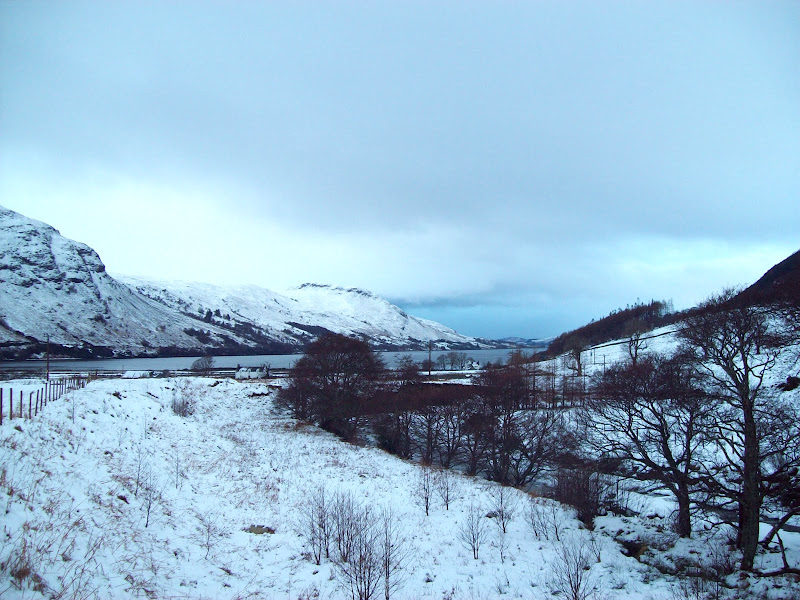 Still, an excuse for a re-visit. Doubt I'll get the 30 Corbetts this year, but it doesn't matter really! I'd rather do something closer to home next time I get a chance to go out.

Nice report malky - pity about the weather and the soft snow though. You have my sympathies - soft, deep, powdery snow does take so much more effort to get through. At least you were able to get out this weekend which is more than me.

From the map, it does look as though there would have been some great views over Loch Broom but the last photo from sea level captures it beautifully. I'm sure you found the top, cairn or no cairn. Cheers

Cant believe your only 30 soon, some amount of bloody hills you've walked. . . .did you start in your nappies

dooterbang wrote:. . . .did you start in your nappies

I did get into bagging Munros in my early to mid teens though (on summer holidays), so quite a handy head start. Mind you, it took me 15 years to get rouund the lot, so I was hardly going at the rate you, Doogz, Monty, davetherave etc seem to be doing it. I think even Kinley got around them in half the time it took me, and he doesn't even like to admit he's a bagger

Oi! Keep your sneaky SH links to yourself

dooterbang wrote:. . . .did you start in your nappies

Did you appreciate the hills as young...er man/boy?

Took me a minute to remember what links those were. Rest assured I get just as much flak for posting the odd WH link over there

Did you appreciate the hills as young...er man/boy?

I'm sure there's other things I should have been up to...

Golf...spoils a good walk doesn't it?
I'm sure LeithySuburbs will have something to say about that

malky_c wrote:I'm sure LeithySuburbs will have something to say about that