Parked just before 9am at the Ben More sign on the A85 at the start of the walk, right next to Darren's car, he'd been asking about parking in the general forum this week. So he made it and nice and early too. Bumped into him on my ascent of Stob Binnein as he was coming down.
The weather was supposed to be reasonable so I was hoping for lots of good photo ops...typical though...beautiful at first then nearing Ben More's summit the cloud came down and there was a horrendous, bitterly cold wind.
The cloud remained most of the time and the wind wasn't much kinder.

A couple of people were coming up about half an hour behind me but I wouldn't bump into them until my descent of Stob Binnein...nobody was stopping for very long as it remained bitterly cold near the summits.

Pleasantly surprised that there were no difficult bits on either hill although crampons were a necessity due to the hard snow and ice.

2 hours got me to Ben More's summit and that was the hardest part of the day as the ascent of Stob Binnein was relatively easy after fighting the wind previously. After chatting to Darren for a bit I reached the second summit to see 2 more people coming up from the opposite side.
Had a good chat with them, took their photo, then headed down into the valley.

6 hours total although I do faf about a lot taking photos, even in this weather..always optimistic

Jogged a fair bit of the 3 km along the track to the car. Looking back at Ben More from Stob Binnein. A few pics on the summit of Stob Binnein. 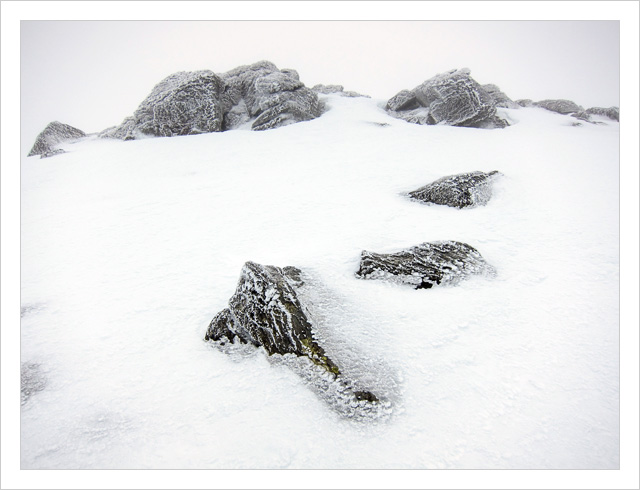 The 2 gents who came up from the other side...at last...a bit of colour

Back down in the valley. ...and a wee waterfall to finish Poor visibilty but great day all the same!

Great report and pics, basically the same for me. Great meeting you up there, at least I know i'm not the only person going into those conditions on my own. I also completed in 6 hours but lost the track on my descent. Made my own path and headed for the farm track and eventually met up with the path again running down parrallel to the stream. Was in the car for 1:25pm and at home for 2:40pm, plenty of time for picking up the little one. Took a couple of snaps of you in the distace on your ascent of Stob Binnein, not very clear but your the litle black dot on the snow. Let me know if you want the originals. Thought you guys would find this interesting.

Nice report and puctures davgil - I like the "grainy, B&W" effect of the Ben More summit and trig point photo.

With regard to sloosh's note, it must be something about this hill. When we climbed Ben More [a long time ago] we also passed two other walkers who were very unprepared for the conditions - no axes,crampons etc.....and that was only a few weeks after a fatal crash of a montain rescue helicopter trying to rescue an injured climber.

People are crazy going up hills in this weather without the proper equipment, I had a slip coming off of Ben More and can only say thanks to my crampons and ice axe as it could have turned out nasty.

Nice one Davegil,
That sounded realy cold up top but well done on getting out. Meeting Darrren was bonus.

Darren - Good to meet you too, like the pics, makes you realise how insignificant you really are up there!
I noticed when I came down myself that you had probably missed the track as it was well to the left of where you headed.
Don't think it would matter much as you can probably descend quite safely anywhere there.