The forecast for this weekend looked really bleak on Thursday so I cancelled my car rental and had resigned myself to the fact that I'd be working on the old PhD on Saturday. I had originally planned to meet Gammy Leg Walker, Alan, and JB for a walk up Stob Ban in the Mamores, but with the predicted conditions we opted to hold out for a better day. But Gammy rang me later that night and suggested we go to Mount Keen and that the lads would swing by St Andrews on their way up from Stirling to pick me up. Ok, good idea, this way we'll at least stretch the legs a bit. At 7:30 I met the guys at the bus station and we set off through Dundee and up to Edzell on our way to the Invermark car park. At 9 we set off on what turned out to be a really enjoyable day. To make it all better, the sun and blue sky actually made an appearance for the first time after a miserable last few days. 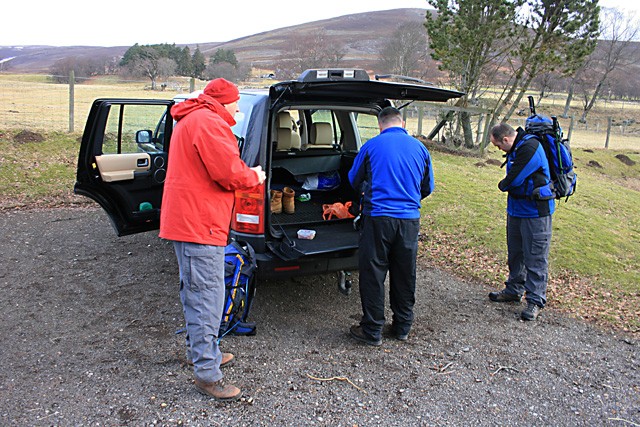 As the conditions improved throughout the morning, we made good time up the wide track through the glen and out onto the moorland that unfolds before the lump of Mount Keen. From here the wind picked up but it wasn't too bad and the views all around kept our spirits up. There was no need for crampons on Mount Keen today, in fact there was little snow on the approach. Most of it was on the wide path up the glen - I had made the dumb decision to leave my microspikes in the car. After nearly 2 1/2 hours we reached the summit, took in the great views of Lochnagar, and had our lunch out of the wind behind the rocks. While the views were great and the lunchtime banter quite good, that simply wasn't enough entertainment for Alan and James. Both had been aching to try out their winter gear, Alan has yet to wear his crampons, and James wanted some ice axe arrest practice. When we reached the largest snow patch on the descent, the boys decided to give the ice axe arrest a go. The snow was fairly slick and packed down and even though it wasn't steep you could still pick up a little speed. Gammy and I watched as the hilarity ensued. I think the video will speak for itself, so I won't go into any more detail about the practice session.

Overall this was a fab day on the hill. Mount Keen wasn't a bad hill at all and the walk was enjoyable throughout. It was so nice to get out of St Andrews today and again I have to thank the boys for going a bit out of their way to pick me up. When we got back I took them to one of my local haunts for some much needed food and drink. I think the 'all-day breakfast' was the popular choice

Let's do it again soon guys! Hey guys, I'm impressed at the weather over that way! Admittedly it was nothing like as bad as it could have been up this way, but those blue skies and clear summits are a bit unexpected

,thanks for the company today had a great time must do it again soon

Brilliant, love the video, should be put into an instruction course to show how it's done

And you even got half-decent weather!

We were over in Glenesk/Lee and had some great views over to Mount Keen. We were expecting another rotten day and we simply going to walk along by the loch, but when faced with Blue Skies like today; winner!

what a bunch of big kids

I waved - did you see me? Was up the Coyles of Muick this afternoon: That was brilliant Stretch, Gammy Leg Walker, Alan, and JB

Thank you for posting

Brilliant vid big man,not so sure Lisa(alans wife,my lassie)would mind to much if he went missing for a day or two,would give her some piece,not sure about the seal pup mind you JB more like a bull walrus trying to get back into the water,stretch once again big fella another great day in your company,and the weather was a bonus,will try and get organised for another day out soon

Thanks for the comments folks. Looks like a few of us all flocked to the sunshine in the east yesterday.

Cheers Paul, with all the falls and gloom on the hills lately we thought we'd inject a bit of joy back into the hillwalking scene

Cracking day on the east yesterday. Great photos and larking about in the video! Just to add to the Keen coverage, I was on the hills above Glen Tanar yesterday so got some nice views of Mt Keen from the north. Mount Keen above the Tanar by Nick Bramhall, on Flickr

Haha looks like you had a superb day all round, looked like a great day for it.

The video is class!!