Well that was our week in Killin over and as I got up for the regulation early morning passing of water I thought - looks clear out there.... hold on ..... no clouds..... stars in sky..... wait a minute this looks like its going to be a good day. OK, all hands on deck, get packed, get the butties made, flask filled, sacks stuffed, gear checked, map....
One hour later - job done and we were off, question was what are we going to do? Earlier in the week we had planned to do Meall Corranaich and Meall a' Choire Leith from Lochan na Lairige road highpoint so - that was a plan then lets re-instate it now. Not so fast. As we drove up the road towards the visitors centre the temperature was -2 C according to the temp dial and this was backed up soon as we left the forest cover and headed upwards as the wheels began to spin. Making an executive decision at the Visitors Centre car park we pulled off the road - skid-pad style and stopped the car in a position that was half parked/half abandoned. Although it may not have looked good - we did have a potential escape route as we were now pointing in the direction of the exit. Excellent.
A couple of 4x4's passed making the progress up the road look possible however I took the soft option and stayed where we were a decision confirmed when I saw a person in the same car get stuck and have to reverse back.
OK, what are we going to do then? Having done Tarmachan earier in the week we opted for Beinn Ghlas and Ben Lawers.
The skies looked good - not clear but clearing with potential of some blue! What are we waiting for.
Leaving the car park and heading for the Nature Trail the blue was getting more and looking at a cloud inversion over Loch Tay. 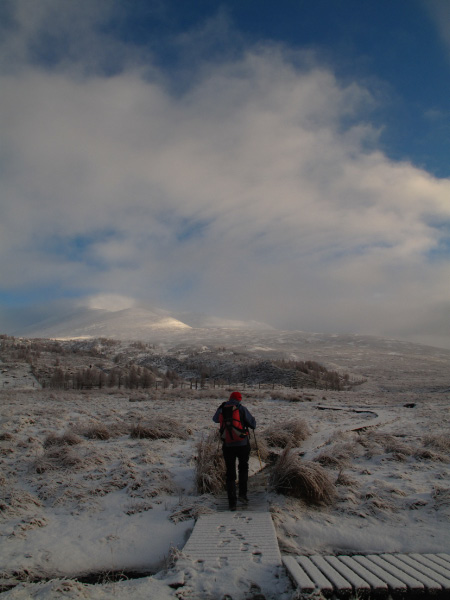 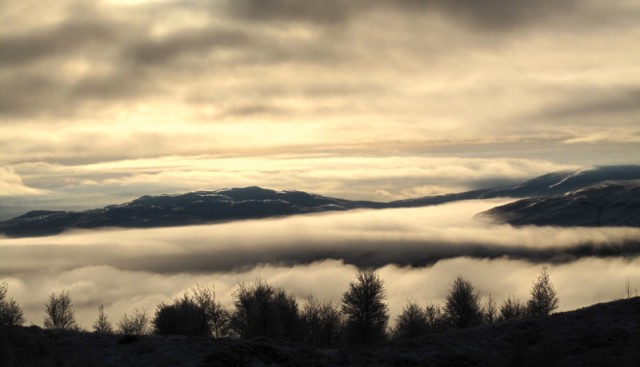 The snow in the nature trail fresh from the night before having topped up what had fallen earlier in the week so it was a fair plod up through the winding track made interesting by the frosted trees. 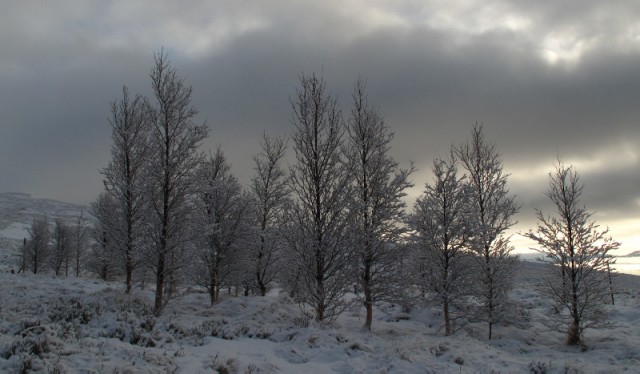 It was further than we thought the route through the nature trail but eventually we could see a gate and passed through a gate. Because of the snow - the clear and obvious path was not so clear and obvious but we made a good guess that it headed up towards the ridge above us .... and it felt like a path. 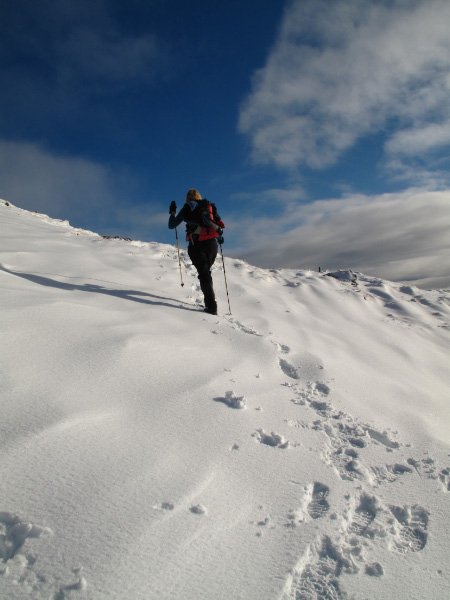 Heading up to the ridge below Beinn Ghlas

This was looking good. We had a pair in front of us and three behind us but were aware of the mini buses arriving at the visitors centre - so we were going to look forward and to the sides and keep going. Around us the views were excellent and we were optimistic for another classic day. 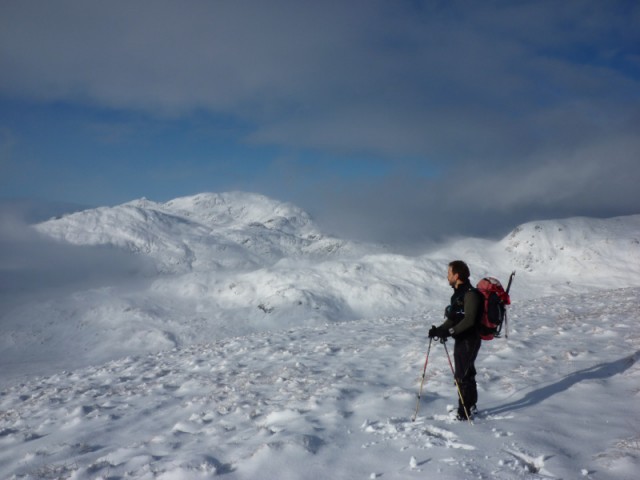 There are a series of climbs before you actually get to see Beinn Ghlas but boy did it look good today. 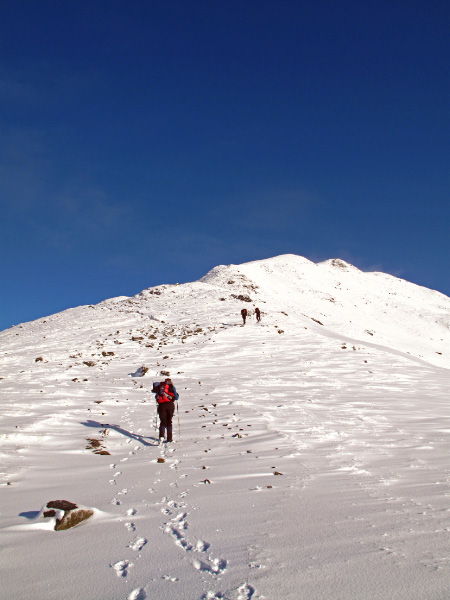 We were quite focussed on our goal supported by the view I have to say, however from behind and around came the cloud as it rolled in over us. All was not lost however as we could see the sun above it and I had been very good recently so I accepted this as a temporary metereological blip. 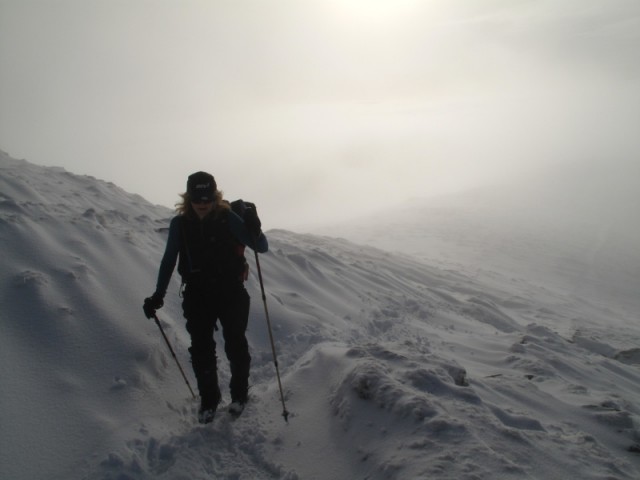 This said it we were mainly above it as it passed over. The snow was now deep enough that we felt it time to put our crampons on and have the axes at the ready as we made our way to the first top of today Beinn Ghlas: 1103m. A very pleasant, neh enjoyable saturday morning so far. The top was clear to the North and East and we could see up the valley below up to Glen Lyon but behind us the clouds were thickening. 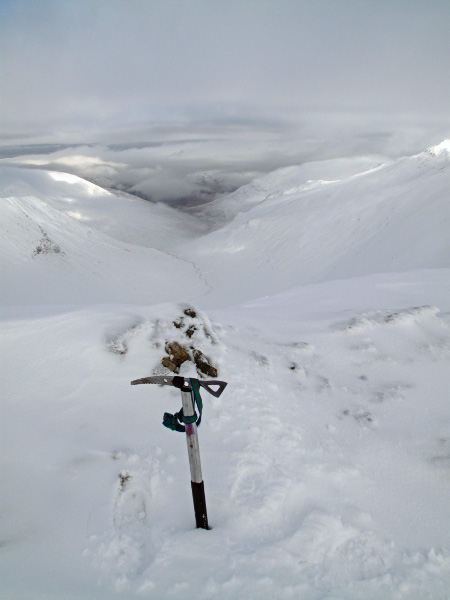 But soon it was clear (or not) that Ben Lawers was not going to retail that fresh alpine look for long. 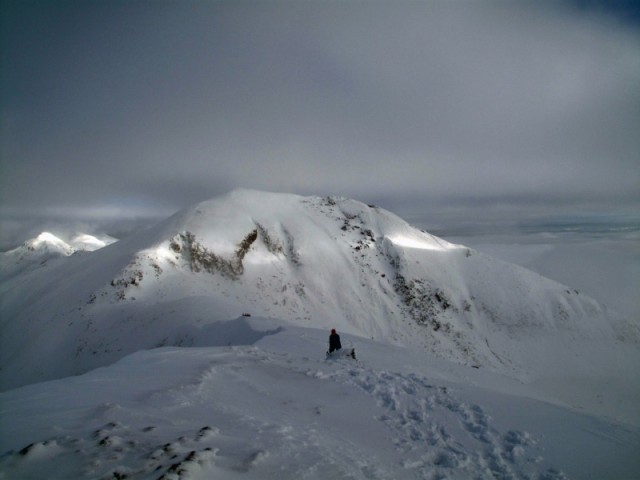 ... and this turned out to soon be true. We had been tagging with a couple of lads who seemed to have rather large packs and very impressive boots. This soon became relevant as they parted from us and made there way to their objective which was to do some winter climbing just south east of the summit in some gullies. The pic below shows Andrea heading up with these gullies behind. We opted for the simpler option. 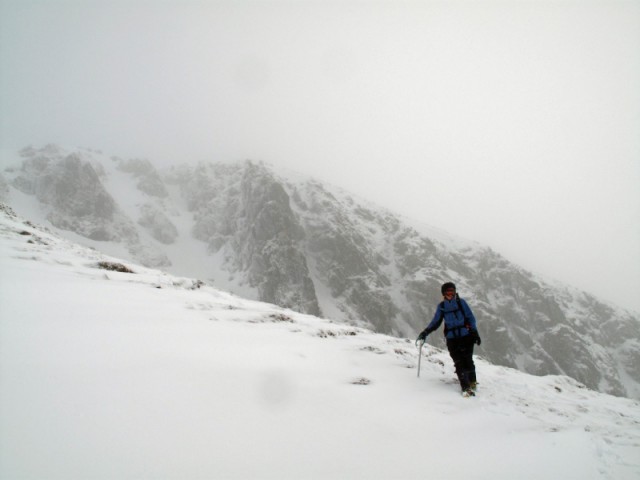 Heading up to Ben Lawers with some gullies behind

Soon we were at the top. Initially we could just make out each other but it did clear a wee bit to reveal .... each other. The group in front were already heading to An Stuc. Not today methinks. 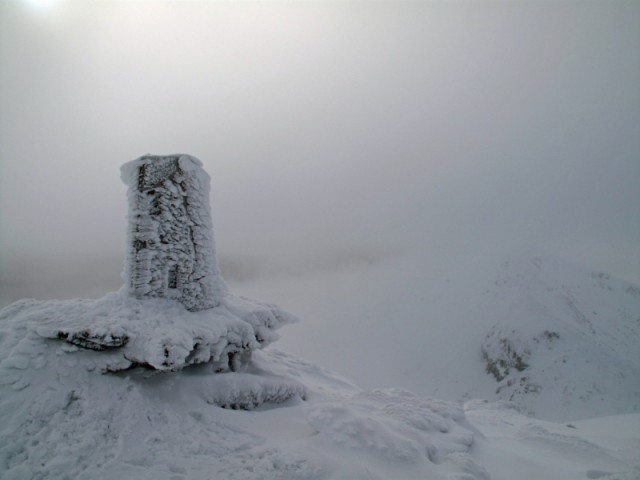 Just at that we turned round to be greeted by the York University Mountaineering Club. After 24 handshakes we felt bonded: we took their picture and we reciprocated - kindship of the hills, brilliant.
We said our farewells and headed off back the way we came - they being the young frightly type bounded off whilst we savoured the moment - OK, we were just slower! That said we did get the view as it cleared for a bit. 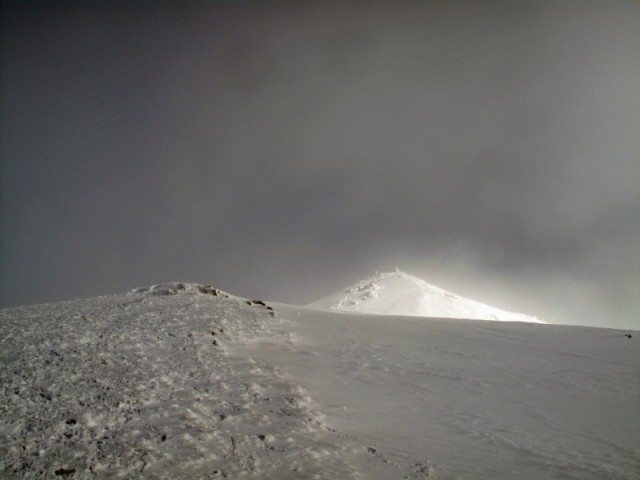 Looking back... is it clearing?

As we got to the ridge below Ben Lawers they were having a pit stop and refuelling - something we do on an ongoing basis.
Once again the clouds parted (a bit) and we were allowed once again to enjoy our surroundings - brilliant. 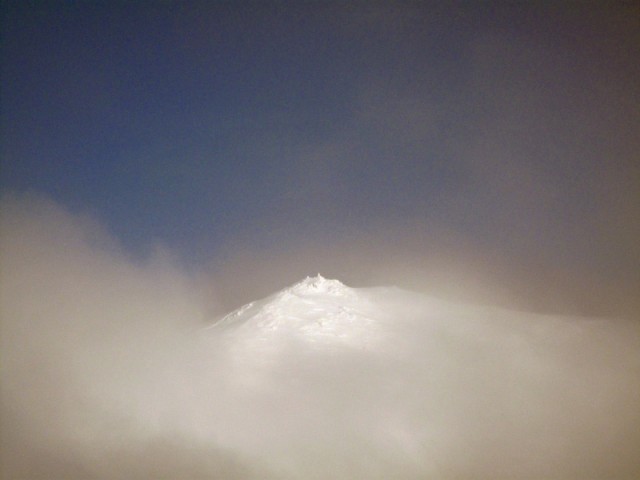 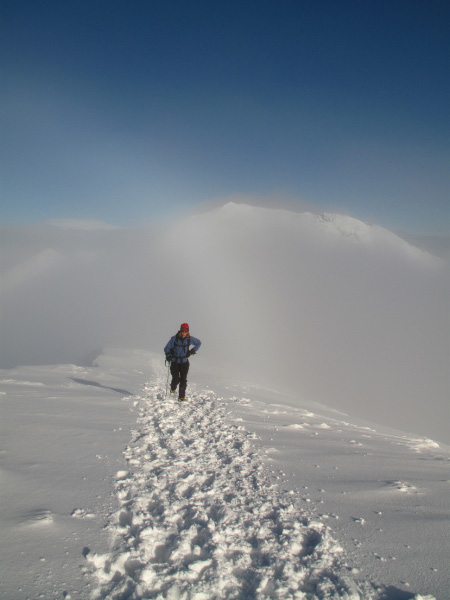 Final pic is looking at me from the lower position up towards Beinn Ghlas summit. 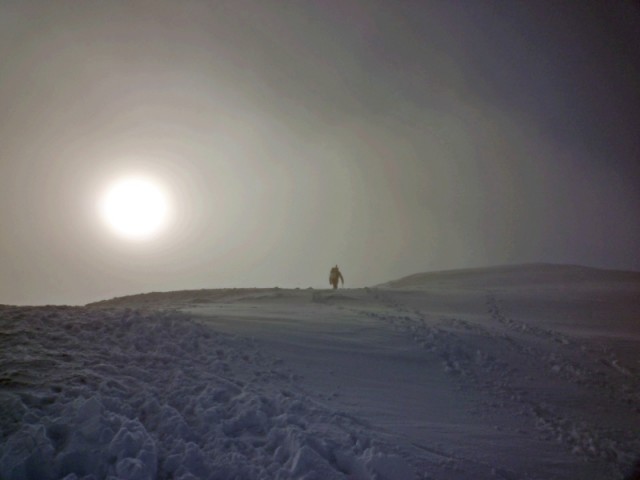 Looking up at Beinn Ghlas

After this it was down through thick cloud all the way down to the Nature trail before we got through it again. It was dense however the significant number of people who had headed up after us had left their mark making an easy trail to follow.
We sat in the car pleased with our decision to squeeze in a couple of extra Munro's before heading off for chips in Mhor Fish in Callander then home.
End of an excellent week in Scotland. Great to be home again.

A great report as was your previous one. When were you there? Your report says today but you mention a Saturday so I'm guessing it was the 12th?

yokehead wrote:A great report as was your previous one. When were you there? Your report says today but you mention a Saturday so I'm guessing it was the 12th?

Oops. Just getting the hang of this. Actually, I wrote it last night then did something and lost the whole report!! In the Bruce tradition - if at first you don't succeed etc, so I wrote it all again. It was the 12th - you were correct. We read your report (you are quicker than us by far). Great week - mixed, but very enjoyable.
We would have done An Stuc but not enough time as I had to visit ma Maw and Da before goin home.
Cheers

great report and some real quality photies, that first shot and the panorama are both outstanding but the light on Ben Lawyers is fantastic - really enjoyed this post, thanks

Another fine report and pics

Fab pictures. I was on Meall Corranaich and Meall a'coire Leith the same day, only I forgot my camera

A wise choice not to head up along the Lochan na Larige. I was the first car up the road past the Tarmachan parking spot that morning - well the road was a sheet of fresh snow anyway. I got about a third of the way along the side of the loch before the car was "bottoming out" on the snow and deciding that I'd rather have a longer walk than spend the day digging snow from under the car, so a "u-ey" and back down to the dam was the new plan. Was passed by a RAF mrt van on the way down.

I had some nice views across to Ben Lawers when the clouds weren't sat on my head and it looked brilliant. I think lots of folk were heading up Ben Lawers though, at one point I could see a train of people sillouetted on the skyline making their way up Beinn Ghlas, would have made a nice picture - did I mention I'd forgotten the camera.

Thanks for taking the time to post the pics.

We saw someone on the top but did not take a picture -sorry.Maybe it was you? Brave man goin up that road.

Nice report. I find the BG appraoch you took to be a long trudge and much prefer going around the west side and upt o BL first. Some cracking pics too.

I once took on that road in winter, rather cockily I may add, in my wife's brand new 4x4 as a shortcut into Glen Lyon.
They say that every day is a school day. Well it certainly was that day and I've never done anything so stupid since. Talk about trouser-filling!

Fabulous looking pictures - looked like a great day despite the cloud cover. Your second picture is a cracker.

A tad late on this reply, but that looks like a cracking day on the hills. Underfoot looks great and the snow and the blue skies.....Well done! Looking forward to winter already.