Making the most of what i hoped to be a sunny Tuesday off, i'd debated Ben Lomond, An Caisteal and Beinn a'Chroin, and Ben Vorlich and Suc a'Chroin. Ruled Ben Lomond out because i wanted to bag a double, and Decided on Ben Vorlich and Stuc a' Chroin since that pair were closer, and i'd aborted Ben Vorlich in November due to ice.

I actually managed to haul myself out of bed at a decent time and set off for Loch Earn Shortly after 7am. Promising outlook, breezy but blue skies. Parked up at Ardvorlich before 9 and ready to set off just after. There was just my car and one other belonging to a couple who set off as i was parking up. 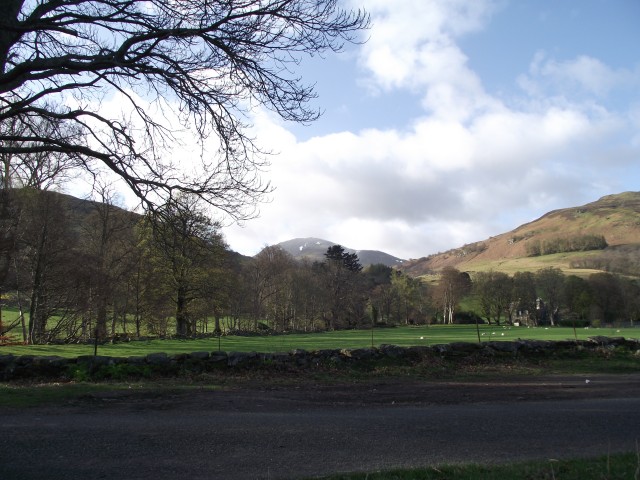 Ben Vorlich from the lochside

It was looking a lot more welcoming than on my November visit. Could clearly see the path up from a distance.
This one was as much for fitness as it was fun, so i tried to keep a decent pace. I'd managed to resume my regular cardio since struggling up Cairn Gorm last month and i could feel the difference, still plenty huffing and puffing though.

A disappointing lack of wildlife to be seen, aside from sheep and noisy cows(seemingly moo-ing in annoyance at the noise from the work on the hydro-electric project) all i spotted was lapwings, finches and a single grouse. 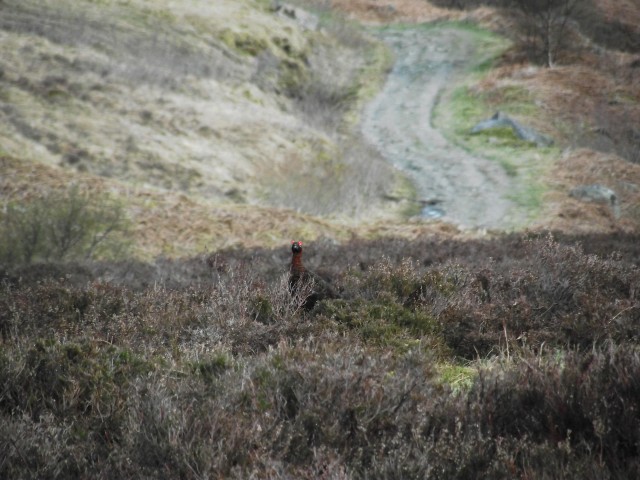 Spot the grouse. Although for all i know it could've been called something else.....

Pressed on up. It was far easier on a path that wasn't topped with ice. Clear enough skies at this point. Good views to the Lawers range. 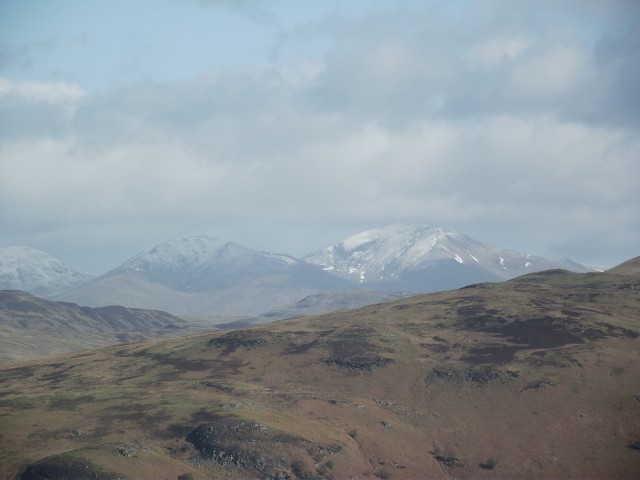 A fairly strong breeze from the west when i got higher up and out of the shelter of Ben Our. Still nice blue sky to the east, but i could see this coming from the west. The couple who'd set off shortly before me didn't hang about at teh top and headed straight back down while there was only wind to contend with. 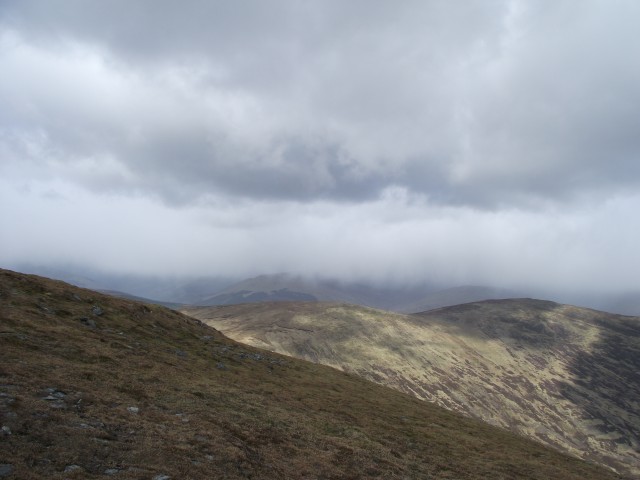 Once i saw that it turned into a race to the top to beat the cloud. I lost. Couldn't see the loch down below or the summit above. Lower down I'd been wishing i'd taken the shoftshell option before i left the house, but i was glad i'd gone for the gore-tex when the weather came in. Horizontal snow reared it's ugly head. 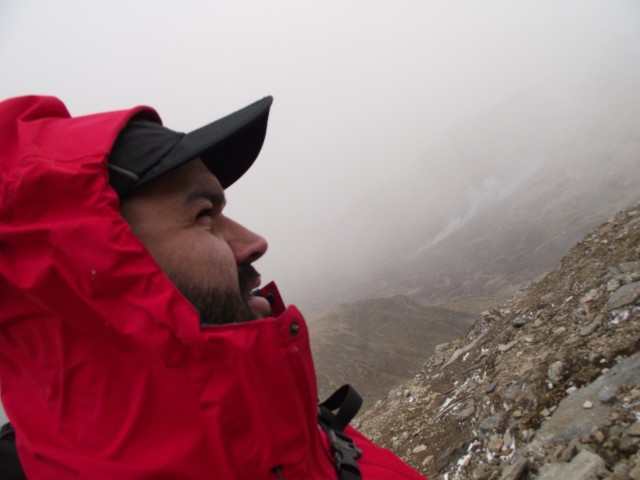 Loch Earn is somewhere under those clouds.

Reached the summit a little after 11. Visibility wasn't too bad at the top initially The summit cairn was clearly visible from the trig point. 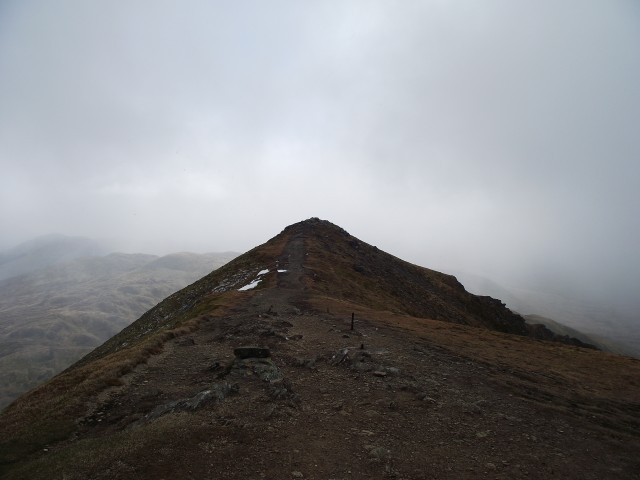 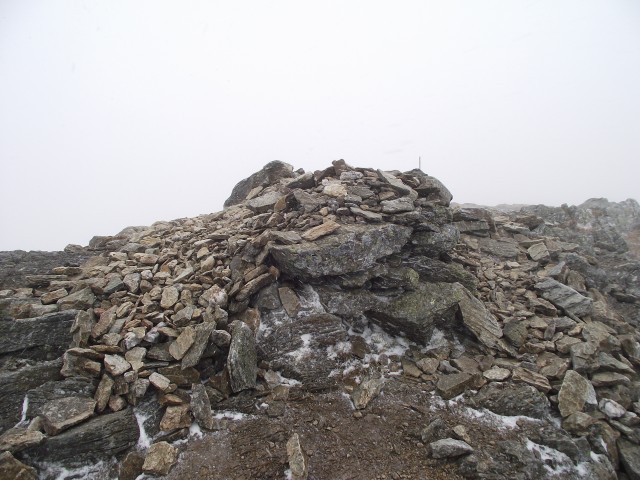 This is how the trig point looked from the summit. The wind driven snow was battering straight into my face. Like i said at teh beginning, i had intended on doing Stuc a'Chroin, but in light of what the weather was like when i was up high i decided to leave it for another day. 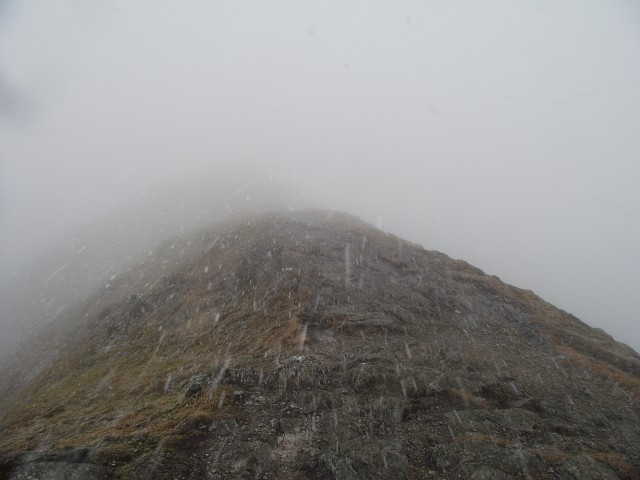 I was glad i'd set off as early as i did, I had the summit to myself but when i could see down lower on the hill there were a good number of people on the way up. I met a trio a short way down from the trig point, i think two of them were regretting opting for shorts. The sun was trying to shine through when they were getting on top. 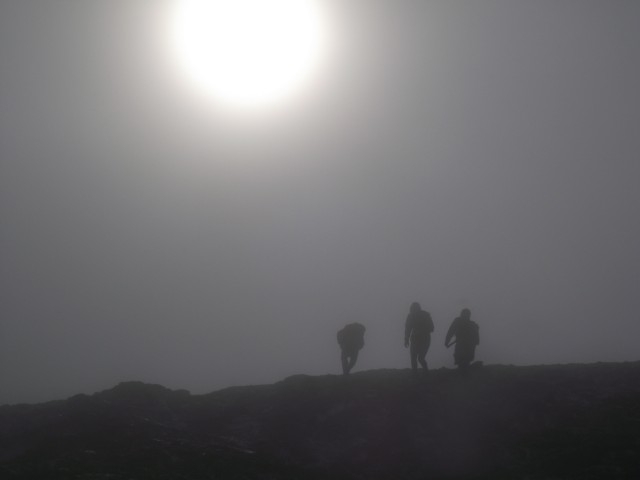 Come on Sol! You can do it!

I don't think i've ever felt so good coming down off a hill. I was buzzing and virtually skipping down. Aside from a few brief showers weather was largely blue skies again until i got to my car so i snapped a few more pics. 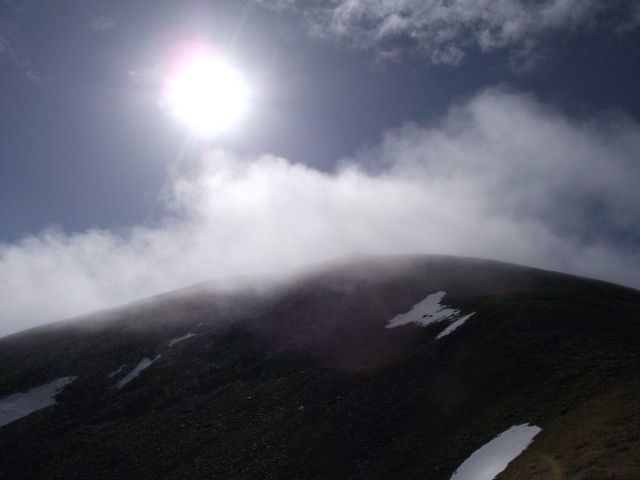 Cloud creeping over the summit.

Loch Earn and Lawers in the distance

Met so many people on there way up. Fromteh 2 cars when i set off there was now over a dozen. having not stopped for a munch i was starving and glad to get back to my car. I'd just settled on a perch by the loch to watch my boots and gaiters and enjoy a coffee when the rain came back. Ate my lunch in the car then headed home. Satisfied with that time of 3 and a half hours. I briefly tempted doing something smaller on the but quickly came to my senses.

All in all a thoroughly enjoyable day, even if i missed out on doin Stuc a'Chroin.

Not bad my friend. Cool pic of the snow blowing toward you on the summit. You can always do the Stuc from the other side now. The image of you skipping down the hill would have been a sight!

Good to see you made it this time, shame you never got the views. Hopefully it'll be better when you go back to do Stuc a' Chroin.

I need to go back as well as it was a bit too snowy when I went up and I was knackered, need to improve my fitness, getting there though.

Good one to get under your belt Nathan and its on our list to do. Didn't fancy it after a few of the guys said it was a bit tricky in the winter. Don't think my soft spikes would do the job..lol.

As stretch says, you could always tackle Stuc a Chroin along with Beinn Each from the Loch Lubnaig side with some nice views.

Love the "Come on Sol! You can do it!" pic - shows there is a lot more to mountain photography than the usual wide angle panoramas

nathan79 wrote:I actually managed to haul myself out of bed at a decent time

Letting the side down Nathan

- won't catch me doing that

Love the pic of the horizontal snow

Cracking pics Nathan, especially the wind driven snow. Just shows how weather can change up there, did the pair on Sunday and got a wee suntan

Cheers for the comments folks
I don't mind having to go back and do Stuc a'Chroin on it's own. It's close enough to home and the scrambling looks like fun. Wouldn't suprise me if i revisited these two a lot of times in the future.

I must say though, i hope that's the last time for a good few months that i have to deal with snow bullets.

Hi,,got these two planned for this Saturday,,hoping for a good dry day, want to complete the two as that will take me into dble figs for my Munro's. Precursor to the WHW next week too.
Smashing pics and a great lesson in the ever changing weather conditions. (men in shorts, in April, in Scotland at 3000ft ha!)

GillC wrote:Hi,,got these two planned for this Saturday,,hoping for a good dry day, want to complete the two as that will take me into dble figs for my Munro's. Precursor to the WHW next week too.
Smashing pics and a great lesson in the ever changing weather conditions. (men in shorts, in April, in Scotland at 3000ft ha!)

23/4 Made it,,check my link,,,fantastic day of bad and then great weather,,