During my April trip this year, when I was playing ‘Chase the (good) weather’, there was a nice, dry forecast for the east (as usual) so I ended up at Glen Clova - my parents had always raved about it so I thought it was time I saw it for myself. I landed up around tea-time but, as I’d had a huge day the day before, I couldn’t be bothered to do more than get settled in the bunkhouse and then have a short walk up to see the famed, and equally raved about, Loch Brandy.

The path conveniently sets off up the hillside immediately behind the Glen Clova Hotel and bunkhouse on a good track. It’s a couple of miles up to the loch and I made good progress. I reached the loch and its attendant lochans all looking deep blue under the clear blue sky and surrounded by a steep corrie wall. On the left is The Snub – a pleasant small hill with a short, sharp climb up it. I decided the ascent would provide some great photos. The climb didn’t take long at all and the path continued round two sides of the corrie where there is a split – you can either come back down the other arm of the corrie, staying with Loch Brandy, or you can venture off east on another track across the next easy rises. I’d seen there was another, less famed loch, Loch Wharral and thought I’d go see what that was like.

I passed over a featureless slight hill, ‘Green Hill’, looking for another split in the track to descend the ridge to the west of Loch Wharral, ‘Shank of Catstae’ but somehow missed the split. I knew I had to turn south before the burn and next rise so turned anyway and soon picked up the track. After seeming to descend quite a way but still not seeing the loch, I decided to abandon the track and just head over to the corrie containing it.

Suddenly Loch Wharral burst into view – the sun was just at the right angle and lit the corrie walls crags and made all the grass look golden. Again the loch was a beautiful calm blue. I personally thought this loch was far nicer than Loch Brandy so here are the pictures for you to judge... I then rejoined the track which did eventually come within sight of the loch anyway and descended to a hollow with a burn. The track then went off east – exactly the opposite direction to where I needed to be but my map showed another track started the other side of this and another burn and descended back to the valley in zig-zags. After crossing a considerable bog I crossed a fenceline and found the zig-zag. However, the path was an old path which was gouged deeply into the hillside and, like many old, deep paths, was full of bog and water. I found that everyone had abandoned the zig-zag and just gone straight down the fence heading for a woodland so I did the same.

The path went off into the woodland but was no longer marked on my map and split into several different routes. I knew there was a high deer fence to get out onto the road so headed up onto a high embankment to look for a gate out of the woodland enclosure. Luckily I’d chosen just the right spot and the gate wasn’t far away. It was then a pleasant walk back for a mile along a newly made path alongside the road and several fishing lochs. A very pleasant evening walk!

some good shots there
im usually quite good with my lochs but have to admit ive never heard of these 2
id go for loch wharral definetly the nicer of the 2 ,did you see any brownies rising

By brownies I presume you mean fish and not little girls in uniform?

Nope, I didn't go right down to the lochshore... Apparently the thing which is supposed to be so beautiful about the first loch, Brandy, is when you get the light in the right direction and all the mica flakes in the water shine golden - I didn't see that and have to say I'd have been very impressed if I had.

and will probably follow most of your route when i do the Corbett Ben Tirran, which is a short distance east of Loch Wharral.

Yeah it wasn't far away at all and I wondered when I saw it on the map whether it was a Corbett - I can always go again and do it another time...

I liked the bunkhouse when I could get in (mid-week) but they seem a bit funny about it on a weekend. I was back in Glen Clova on a weekend not long after and have to admit the place was mowed... I went into the hotel to ask if there was any room in the bunkhouse. They asked if I was in a group. I said no and she just said 'Well no then' - like it was dependent on being in a group to get a room. That put me out a bit, especially as they have some small rooms which only have 2 beds so they could have let me have one of those...
Last edited by mountain coward on Sat Jul 25, 2009 4:19 pm, edited 1 time in total.

Yes, some great pics. Like canisp I'm going to visit both lochs on the way to Ben Tirran - hopefully this Autumn as Helen hasn't been to Angus Glens and she can do Mayar and Dreish that day

I really liked Dreish and Mayar - would like to do them again sometime when I can see them!;-) They were a pleasant walk though - even in a pea-souper. Presumably you'll be visiting Corrie Fee either on the way up or down? I was going to put my walk report in but it seems a shame when I didn't get any piccies (I didn't take the camera as it was such a bad day).

I'll suggest to Helen comes down Corrie Fee; we tend to split when getting new routes to cover the most ground (unless it's somewhere we both really want to go). I think when I climbed them I slogged over lots of boggy ground to Tolmount and Tom Buidhe, but won't be recommending that

I quite enjoyed Dreish and Mayar (climbed via The Scorrie route) although I think the track up the Shank of Drumfollow encourages the jeans and trainers mob - of which there was quite a few when I was there.

Next time I'm back up there, I'll be doing the route in the opposite direction as the walk up to the Fee waterfall is stunning. Anybody got any winter pix? Think I'll be back up there when there's some snow - it must look fantastic with a bit of snow and ice!
... just for you mc... 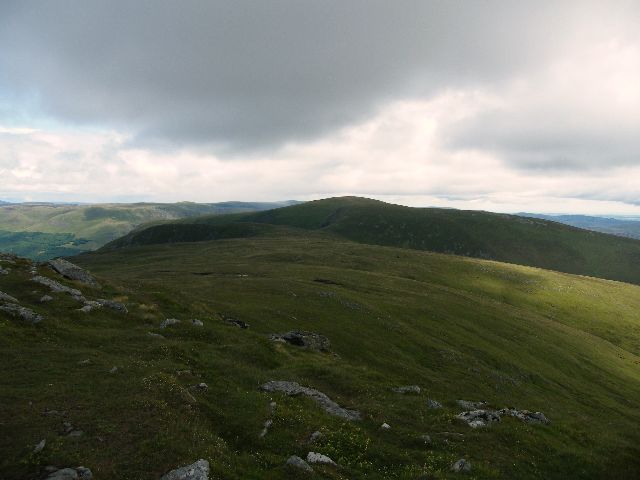 Thanks for the Corrie Fee pics - I was pretty upset I didn't get any... although I'm sure I'll be visiting it again. It's a great route down into the corrie isn't it?

There aren't many corries you could describe as "pretty", but this is one. Came as a bit of a surprise, to be honest.

What was the Scorrie route like? It looked ferociously steep. Presumably there's no path on it? I couldn't see one anyway...

When I did Mayar and Driesh with some friends in April 08, some of the group came off Driesh via the Shank of Drumfollow but myself and two others opted to come down via the Scorrie route. It was a living hell! This was in the days when I was just honing my navigational skills so I don't know whether there was a path and we just went badly wrong and missed it or what

. Anyway, higher up it was, as you say, "ferociously steep" on grassy/bouldery slopes and a bit lower down at the tree line we were confronted with a post-felling mess of tangled trunks and roots. The trees had clearly been chain dragged across the slope and at some points we had to clamber down "embankments" that were probably about 10 feet high

Never been so glad to get back onto a path!

Graeme - you would have been better breaking right at the tree line on the way down, going towards the farm and then following the farm track.

Well not sure if I'll be doing it again or not - Richard my walking buddy hasn't done it yet so you never know, we may try that route next time...