On a hot and sunny Good Friday, another sweep of some outlying peaks that, even on a day like this, saw very few other people.

The Rhinog Y Garn makes for an enjoyable and challenging morning's walk, with some pretty steep scrambling ups and downs by this route.

our_route.gpx Open full screen  NB: Walkhighlands is not responsible for the accuracy of gpx files in users posts
While the lower slopes - up to the falls and then winding through the pleasant and well-pathed deciduous woods - are easy going, the climb up to the left of the impressive cliffs of Y Garn is fiercely steep in places, making you grateful for the wiry heather on which to keep your grip at times. It's a bit of disappointment not to come out at a summit after that, but you still have a fairly long climb to go across the gentler slopes, first rough then grassy with a few little rocks, to the peak. There are good open views from here across to the higher Rhinogydd. View northeast to Arenigs from slopes of Y Garn 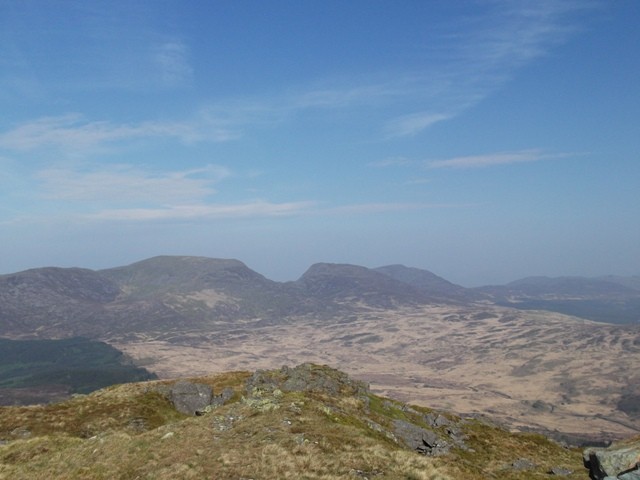 The descent by the north-east ridge is very enjoyable to begin with (although there isn't really a clear way to cross the high fenced stone wall in this direction, and some might find it very difficult), with a good winding path beside the wall skirting through the heather and rocks above the forest and some easy scrambling down the steeper parts. The last part before the farm is quite tricky though - an almost vertical cliff-face down which it's just possible to find a zigzagging route, but it's never obvious and there is plenty of backtracking from apparent dead-ends. A thick covering of very dry and loose dead vegetation underfoot didn't help with this; in wet or icy conditions it might be a bit too dangerous to even try. It doesn't last long though, before you are back on the easy route through the woods to Ganllwyd. View back to Y Garn Taking the universal good advice that this was a walk only to be tackled after a long dry spell, the afternoon's route was over the peaty eastern Arans.

our_route.gpx Open full screen  NB: Walkhighlands is not responsible for the accuracy of gpx files in users posts
At the risk of annoying everyone else who has suffered taking on this walk, today the route across the deep peat-hags to Llechwedd Du wasn't too difficult, even bordering on enjoyable. The hags, like those on Kinder, at least have a sort of 'honest' bogginess - you can safely assume that the tops of each are firm and easy enough, even if what's between them might not be..., so you never get an unexpected bootful as you do in reedier, wetter marshes. In these conditions, it's rather good fun hopping (long-jumping might be more accurate in places...) between, and you can make it to the rather unassuming little summit, with its good views of the other peaks of this walk and the main Aran ridge, with dry, even clean, feet. It's then comfortable enough walking along the fence over the bland round top of Esgeiriau Gwynion and down to the valley, with views of the main Arans enlivening the going throughout. 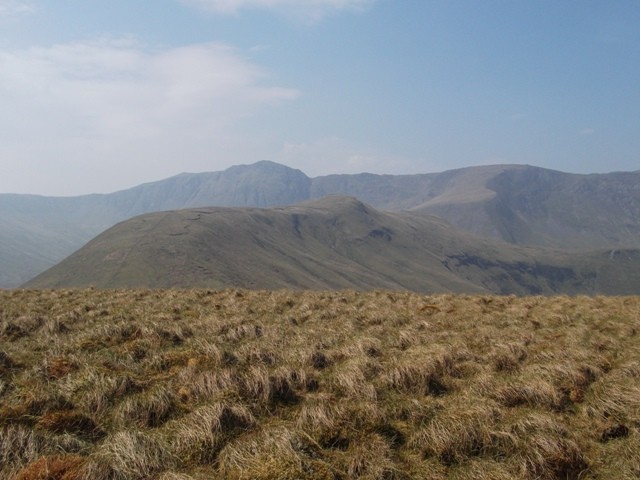 The best part of this walk is the next two or three miles, descending the steep-sided green valley on a really good firm grassy track with the stream tumbling down below. The long tramp back up the road north is less interesting, although still with good views as you climb to the pass, but it's probably the best way to regain so much height so late in the day. Moel y Cerrig Duon, while more shapely than the earlier peaks, is still a little nondescript, but it's an easy and dry enough ascent on a surprisingly well-trodden path from the road. There are some very pleasant parts to this route, but a lot of them are in the distance, and it might be a grim sort of slog in poor visibility - one to pick the right day for... 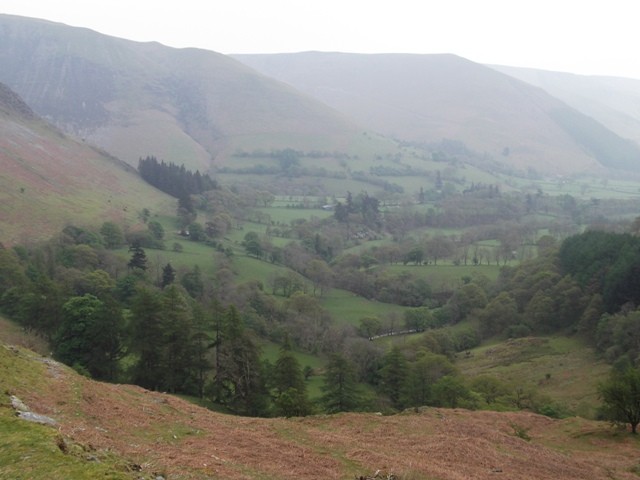 View back up Llaethnant valley Excellent report(s) and pics poppiesrara, I can see why people say wait for a dry time, wouldn't fancy those hags after a wet spring/autumn

Nice report and photos as usual, poppiesrara. I still have Llechwedd Du on my 'to-do' list, and judging by your comments and those of Smirnie 71, it's certainly one to save for a dry day! I know what you mean about honest bogginess - some peaks lull you in to a false sense of security, but when the hags are as prominent as those, you know what you're in for.

I did Moel y Cerrig Duon the other week as a single, starting at the foot of the steep pass to the south and was pleasantly surprised at what a nice little peak it turned out to be, offering fine views in all directions.

Good Friday was certainly a good day weather-wise in North Wales. I was over on Moel Eilio above Llanberis in perfect conditions, albeit a bit breezy on the tops. I would have thought the combination of fantastic weather and it being a bank holiday would have brought the crowds out, yet it was surprisingly quiet.

Fantastic report and great photos - both look like fantastic but challenging walks in their own way and I take my hat off to you!
Y Garn was to be my first 'proper' walk a couple of years ago - suffice to say we didn't get anywhere near the summit as I whimped out having lost my feet in between heather, rocks and bog. As for the eastern Arans - I will be back, defeated by the hags last month! Still it's good to know what it's like when the conditions are right, though I still think a pogo stick for hopping between hags is the way to go!

Thanks, all. Smirnie - I half-remembered your report (rather guiltily!) while happily tramping up Llechwedd Du - but did finally get my boggy comeuppance for it yesterday instead... Red Peak, amazing that there weren't more people on that Moel Eilio ridge on such a day; hard to see why it isn't more popular.

Hehehehehe... I wouldn't like to say I'm delighted but there is the tiniest suggestion of a smirk on my face...

There were all of about 20-30 peeps on Rhinog Fawr Sunday just gone so I'm not that surprised, people do tend to head for the honey pots and to be frank, that's fine by me!

I think we should start a campaign to have welsh pronounciations listed, if I'm not stumbling on the peat hags of Llechwedd Du, I'm stumbling over my tongue trying to say it!