I always kind of knew that this walk was going to become very personal for me. Not because it was 100 munros. Not because it was CMD, or the arete across to Ben Nevis or anything like that. Events of recent months had put such grand ideas of my own successes into perspective. The achievement of 100 munros simply brought things into sharp focus for me and as I set off from the North Face car park thoughts of some special people to me were very much to the forefront of my mind.

Recently my trips have been long on miles, with long walk ins to get the muscles warmed up. Imagine my shock when, almost immediately leaving the carpark the recently renovated track heads right, up a steep path toward the alt a Mhuillinn. That certainly got the blood pumping and gave the calf muscles an early burn 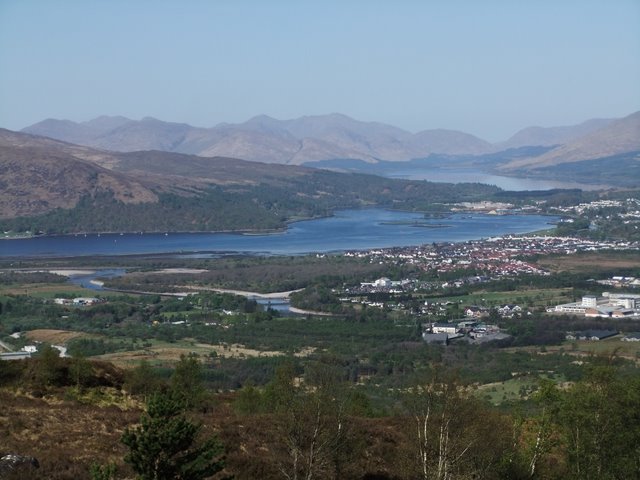 The track up to the Alt a Mhuillinn is excellent. After crossing a style it was a short trip along the track to the North Face and eventually leaving this track for the path up onto the CMD ridge. Luckily, what with the dry weather recently this path wasn't too bad. I can imagine it would be a bit of a bog trot in wetter conditions. It was another steepish one, which had me taking plenty of 'photo stops'

which gave me an opportunity to get my breath back. Rather than hit the ridge at its bottom end the path skirts round to the right and after a short levelling heads back left up a slippery, eroded gravel path to the ridge just below the minor top of Carn Dearg Meadhoach. This gave an opportunity for a short rest at the summit cairn to enjoy the views of the North Face, as well as the view up to CMD itself. So far the day was turning out to be ecellent As you can imagine on such a fine day there were a few people about, but is was all good. At the minor summit a few off us were taking the chance to enjoy the views and get a bit of a rest. After a short stop admiring the views it was off on the short, easy walk up to CMD itself. I was after a little space between myself and the other walkers for a few moments; a short time for reflection as I headed up to the CMD summit before the hub bub took over.

As I say, the walking was easy. Just before the summit I stopped. Standing in such magnificent scenery my thoughts were of those special people that were such an influence on my life. For me this was their time, before the euphoria of attaining the summit. Even then, they were first in my thoughts. I was so, so glad that the guys behind me on the hill were just far enough back to enable me this short private moment on the way to and at the summit itself From the start of the walk there had been a bit of a breeze. At the CMD summit this breeze had turned a touch gusty and so any thoughts of an immediate attempt of the arete was put on hold until the gusts died down. This just gave me the chance to admire the views.

Oh, and what views First view of the arete The Mamores from CMD summit

Stashed away in my rucksack was a wee bottle of beer, which I had intended to crack open on CMD to raise a toast to others, but a quick look at the arete suggested a clear head might be better

Given the gusts of wind, steady legs would also be needed too

So it was an easy decision delay the toast until getting myself on the summit of the Ben.

Eventually it was time to tackle the arete. On the initial section leading down from CMD there are bypass paths on both the right and left hand side, but I wasn't there for bypass paths. I wanted to experience the joys of the arete

And what joys!! Until this moment I hadn't thought I had a head for these types of heights, but this was some of the best fun on the hills I have ever had. I was aiming to keept to the crest of the ridge all the way, and at no point ever felt any sense of exposure, even with the strength of the wind. I was taking my time, but only because I was enjoying it so much. Heading onto the arete View along initial section of the arete Route to the Ben View back to CMD 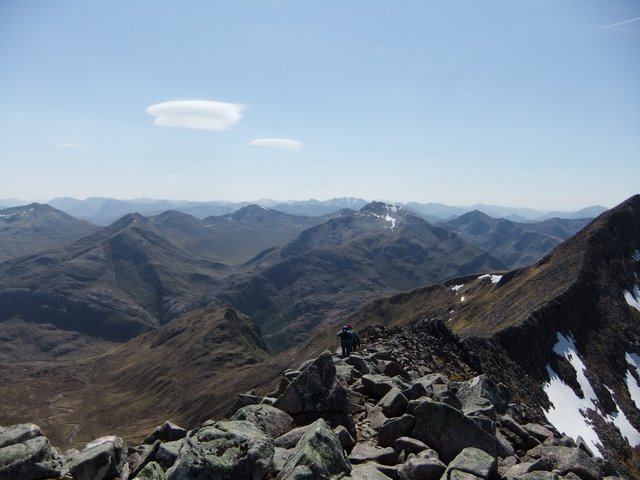 The Ben from the arete 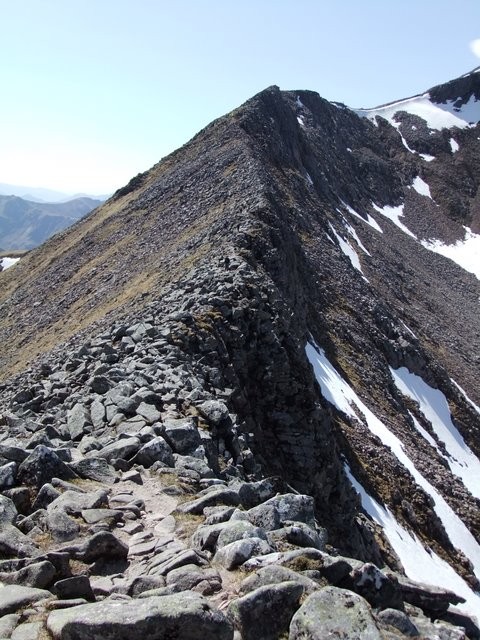 the arete passed for me without incident. On the very final, steep, section I was hoping to remain on the crest, but the wind was just a touch too strong and so I succumbed and dropped down onto the path for the final push to the base of the Ben.

Then it was a slog up shocking path and boulders onto the summit plateau of the Ben. To be fair, I got there reasonably quickly, but it probably wasn't the best part of the walk. The only compensation was some of the views available. 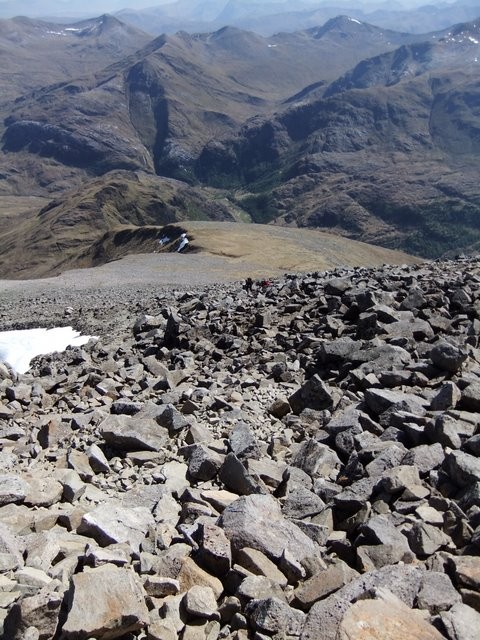 View back down the Ben Nevis 'slog'

And then I was on the summit of Ben Nevis.

Ah, what to say about the Ben! Sadly a victim of its noteriety. Which for me is a shame, as I quite like the hill. Given it was a super day there were always going to be crowds on the top (leaving litter all over the place), as well as a steady flow of ill prepared and ill equipped 'ants' up and down the highway on my descent. But today I wasn't going to let this get to me. I decided to drop into a wind break away from the summit hullaballoo and seek a bit of solitude amongst the madness.

Got a good view of the Grey Corries, scene of an epic for me two days before Grey Corries from the Ben I had a wander round the summit and along the cliffs. Better views than I had perhaps expected, given how big the summit plateau is. Heading down and there was a last look back at the jumble of the summit Looking back at the summit of the Ben

A couple of nice views heading off the summit and down toward Lochan Meall an t-Suidhe as compensation for being on the tourist highway. 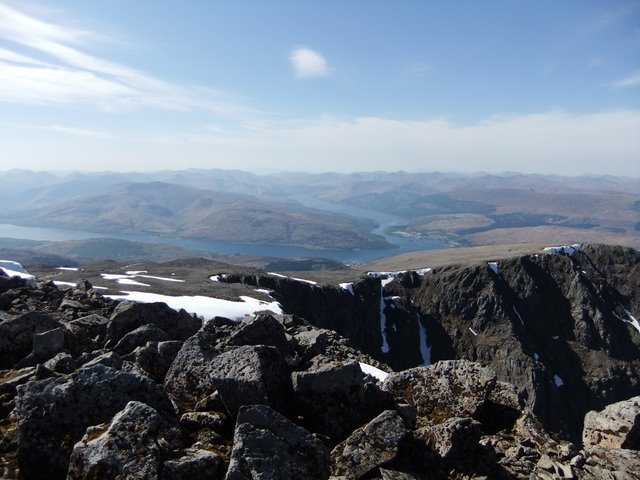 View from the Ben Luckily I was leaving the ant trail at the lochan, heading back toward the North Face car park. I chose to take the path to the end of the lochan and then head down the easy ridge leading off Carn Dearg. Nice dry, spongy ground (better than the zig-zags I had just endured) made easy going back to the track at the Allt a Mhuillinn, with some great final views of the Ben The Ben in decent The Ben from the Allt a Mhuillinn

Then it was a short trip back down to the car.

A great walk. In fact an excellent walk - well, I did have amazing conditions

A perfect day for the Ben - well done.

Congrats Pete, it's a great ridge no doubt and well done for reaching 100. Love the shots looking back to CMD!

I've done this route a couple of times and loved it too.
Good report and photos, well done!

Congratulations on reaching 100 PeteR. Looks like you had a great day for it - some excellent photos. Glad you also got that wee moment to yourself. Those things are important.

Ah, so nice. Clear pics too.

Once a week I seem to stumble upon the CMD + Nevis on this site. It's a sign! It's a SIGN!!

Cant wait to do these, hopefully on a day like you had

What a perfect day. Your pictures captured it all. Fantastic ones on the arete and also looking onto the summit. Pity about the wind but that did not seem to curb your enthusiasm or enjoyment.
Thanks for sharing that. Excellent report.

Congartulations on your 100 and a great report as well

Some very detailed photos to help those who follow in your footsteps. No wonder you're "cock a hoop" at completing these two.

Well done on the hundred hope to get there by the year end,well at least closeish!!

Great beer and hoped you enjoyed every last drop of ur hard earned beer!

from reading your report and looking at the excellent pics you took it sure semed like a great day all in,well done

Congrats on the 100 - & in such style too. Excellent report on what mus have been a great day.

Couldn't have picked a better hill for the 100.
Well done!

Congratulations on the 100 Peter

You certainly picked a great day for it, fabulous views all around. A beer and a toast well earned.

Well done on 100, will take me years to get there.
I did the CMD, arete and Ben Nevis too just the day earlier but from the normal tourist starting point. This looks a finer way to do it, some cracking pictures showing some great scenery and a great report too.