Ive no idea whether this will work or not but Ill try. It was part of the Horseshoe at Ballachullish and these photos ( if they work) are from Sgorr Dearg, one of the two Munros up there. Im not even sure if they will show on the report never mind the report of how I got there but I got to try this!

Ok Ill try my wee story and see if it works. I set off with my two dogs for a September weekend walking in Glencoe. The year before I had gone to the other Munro Sgurr Donneil but time had prevented going over to this one. Sgorr Dearg. The first day I set off which was glorious weather, there were change of directions all over the place and I followed one of them the wrong way which would be to have taken me back up the red gully way to Donneil. I had my old dog who cant manage too much and I didnt want to risk him going up the gully so I chilled out, came back and hoped for a good day following.
(right here goes with trying to put pictures in)(if this works then a photo from in front of that posh hotel over the water will appear and if it doesnt it will end up somewhere at the bottom!)
I began the walk being a bit more careful with where I was supposed to be going although I had figured out where I had gone wrong. (Following the directions the forestry had put up to be honest). The thing with this walk is that you need to keep looking back because the view is creeping up behind you,, and its stunning! (another photo bash)
The path is more or less straightforward and there is nothing difficult about it. Its obviously part of the forestry commission and you do have to go through the forest for a bit and thats a wee bit Lord of the Ringsy in places

Anyway if its not in order there is a pic of Sgurr Donneil from the beallach.
And Im about to do one from the beallach with one of my dogs in it up to the summit of Sgorr Dearg.
(Im going to try another photo)
Another straightforward walk up to the summit and then it just stops! A wee cairn and then a pretty steep drop off which, in bad weather is worth knowing about!
Fantastic views over to Bidean and other hills (Im not very good at identifying hills but obviously the Pap and the AE were hard to miss!
It was a lovely walk (as was its partner Donneil but thats maybe for another attempt at a report!
Ive added a couple of pictures including the wee cairn and a piccy from the garage over the bridge at Ballachullish of the horseshoe.
(Ive just noticed a bit below that says place inline (woops) does this mean I place the photos for example count a line down to here and then post?) Im not altogether hopeless but Im nae great with how to get this in order! Anyway my learning experience continues! Hope you like the photos for those of you who havent seen it in good weather,, its worth another walk up on a bonnie day by the way! 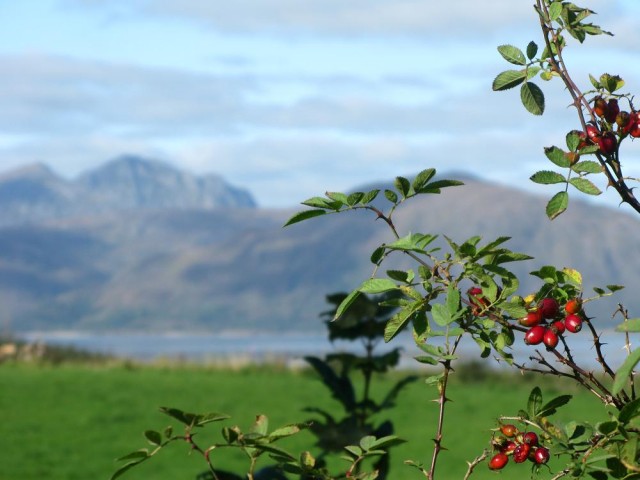 Bloomin heck it worked, well the photos did. !

These are fine images and do show up the area to good effect.....many folks favourite summits live in this area

Some cracking pics there......are we getting a report now

I most surely will now I think I know how to work this!

Great photos Holly. Now go back and edit the title to Ballahulish horseshoe.

As requested, Ive changed it!

The next step is to edit it again, and then choose the Walkhighlands route; narrow down the list by pressing Fort William at the top and then choose Beinn a'Bheithir. It will automatically fill in the two hills for you that way.

Excellent again. I had to add another comment. We done this at the WH Glencoe meet and the weather was pants with the hills all clagged in. I never imagined the views were so spectacular.

monty wrote:We done this at the WH Glencoe meet and the weather was pants with the hills all clagged in. I never imagined the views were so spectacular.

I'll second that monty- doesn't look like the place we were!

Ok Ill give it a try. I have a few photos from up there and from the other Munro too which I did on another walk. Both were really good days. Do I do a wee description and then add the photo, then carry on with another wee description etc?
Och Ill try and see what happens!

Well I did try but I havent figured out the photos bit and the advice about the hills list but thats me, not the advice! Hope it makes some kind of sense! And to Highland SC your story about the pap of Glencoe, I thought Id dedicate that one to you and your lovely wife!

Re: The Ballachullish Horseshoe! Directors cut 3 (I think)

Superb photos holly. I love this ridge. Tends to be in the shadow of the popular Glencoe routes but it can hold its own against any of them, especially if the initial ascent to Sgorr Bhan is tackled by the rocky north-east ridge (some fine Scrambling here). Did it last year but I will definitely do it again.