I'm sure some of you were expecting a report on the Ring of Steall after I joined Kev for a day of his epic "50 Munros in a week" charity fundraiser challenge. Well, with me being on Paternity Leave this week, that was the original plan, but the weather kind of put paid to that and brought about a quick rethink and implementation of Plan B.

Kev had texted me on Tuesday evening saying he had experienced "atrocious" conditions earlier that day on the South Glen Shiel Ridge and asking if I could check what MWIS was saying about that area for the following day. My findings , which I duly texted back to him, did not make pleasant reading. While I was at it, I had a look for what they were saying about the prospects for the Glencoe and Fort William area on the Thursday. That made only marginally less uncomfortable reading. Still, I went to bed on the Wednesday evening like a coiled spring, the excitement at the prospect of 5 Munros threatening to do Ailsa's job of sleep deprivation for her! Kev had texted that evening to say he'd already nailed Stob Ban and Mullach nan Coirean, clearly having made a swifter than scheduled exit from the Glen Shiel area, so we'd be down to just the Ring of Steall and Na Gruagaichean. But it would still be a handy haul, and considering I'd only managed a paltry 3 new Munros since the turn of the year, I was buzzing at the prospect.

The alarm was set for 3.30 but I was awake 10 minutes ahead of it. Ailsa certainly seems to have turned me into a lighter sleeper than I used to be! I quickly had breakfast and a couple of quick mugs of coffee and made up a hot juice flask. I half expected to have to squeeze a quick feed in before leaving but Ailsa never stirred so I left that one to her mum and was out the door and on the road by 4 o'clock, with the sky already beginning to lighten. It was a pretty skanky looking morning in Perth and it really didn't improve too much all the way up the quiet A9 and along the A86. There was the odd bright spell but it was always quickly overtaken by a heavy shower and grey skies. By the time I turned left at the roundabout in Fort Bill and into Glen Nevis, it was bouncing about on the road surface in front of me as the wipers worked overtime.

I was at the Lower Falls car park well ahead of our designated 7.15 meet time so I drank the hot juice and scoffed a bakewell slice I'd purchased at a petrol station on the way into Fort William. Kev pulled in at the back of 7 and asked if I had got his text, which I hadn't as I'd been in the glen by then and hadn't had reception. He had texted to say I could have a "get out of jail" escape clause if I wanted on the grounds of unbelievably foul weather. Are you kidding Kev???? I'm here and I'm damn well not going home until I've done something, but you have a fair point! The Ring of Steall would be a complete waste of a good walk in this weather. In any case, Kev's totals had taken a real pounding over the last couple of days due to the miserable weather and he was philosophical about the fact that he wasn't going to make the 50 as planned. He was also quite keen to do something though, and I think the prospect of actually walking with another human being for a day was quite appealing, fearing after 5 days of solitary ramblings through the mountains of the north west Highlands that he was losing touch with reality and turning into a blethering social inadequate! Oh well, we couldn't have that so we'd better do something.

Heading south seemed to be the best option so I quickly suggested Buachaille Etive Beag. With two cars, we could leave one at the Chasm at the head of the path into the Lairig Eilde and drive the other round to Dalness in Glen Etive and tackle Stob Dubh via the back door of the south west ridge. It would give Kev another two for his weekly total and me the chance to claim at least another couple of new Munros via a route I'd always preferred the look of to the conventional up and down the staircase option.

We drove south through some torrential conditions, out of Fort William, past the Corran Ferry, over the Ballachuillish Bridge and into Glencoe, with the weather seeming to improve little by little the further south we headed. We found a suitable parking spot at Dalness and got well and truly waterproofed-up before setting off onto the viciously steep looking south west ridge shortly before 8.30am.

A potentially problematic river crossing was successfully tackled early doors and we then made good progress up the crest of the grassy ridge until about 700 metres or so, when we entered the slippery boulder field and were greeted with increasingly ferocious gales and rain with all the subtlety and appeal of driving needles. This slowed things a bit until we reached the summit ridge just short of Stob Dubh, where ferocious winds had me hunkered down and pinned to the spot on a couple of occasions.

We didn't dally here before heading down onto the connecting ridge heading for Stob Coire Raineach, where we were a little more sheltered from the worst excesses of the howling wind and driving rain. By the time we reached the second Munro summit, it had abated sufficiently to allow us to sit for 15 minutes or so and have lunch, before retracing our steps back to the bealach and down the excellent path into the Lairig Eilde and back to my car.

Once Kev was reunited with his vehicle in Glen Etive, he headed back home to Glasgow for a much needed shower and a night in a real bed before returning north the following day to tackle the Ben Alder hills and then head to the finish line in the Cairngorms on Saturday, while I made it home by the earlier than anticipated time of 3pm to resume official Paternity Leave duties. 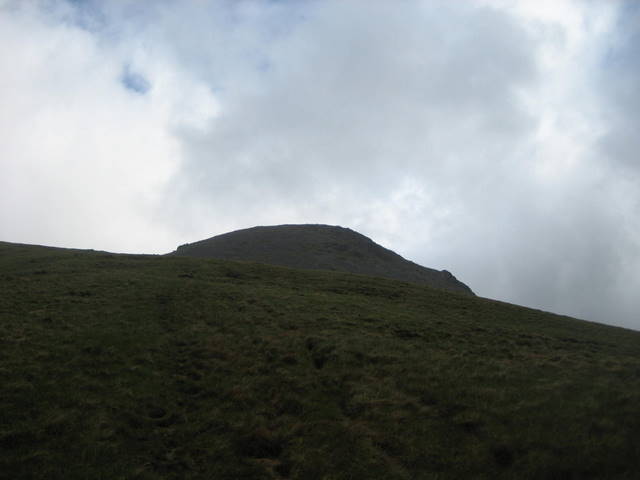 A smattering of blue above the rocky summit dome Cloud rolling down the glen Across to Big Brother Rainbow over the Lairig Eilde Kev closing in on Stob Dubh Me on Stob Dubh - the dawn of a new century! Along the ridge from Munro to Munro 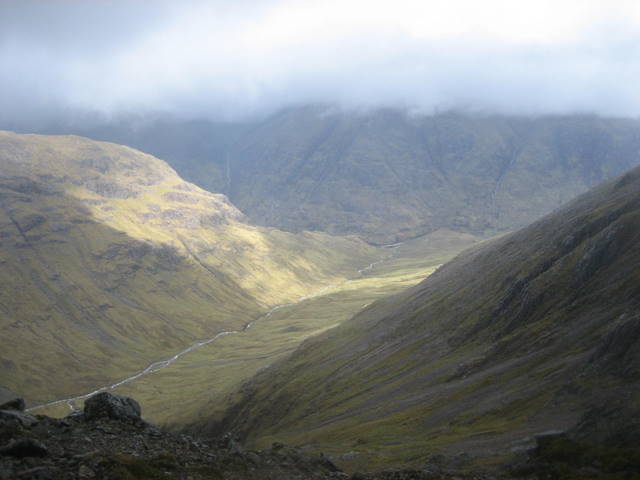 Stob Dubh from the ascent of Raineach It's grim over Glencoe! Kev on Stob Coire Raineach with the Big Bookil in background Stob Dubh from summit of Raineach

Nice report Graeme.
Kev must have been happy to have company after the last 5 days of miserable weather and lone walking. Mind you the weather didnt look much better for this walk.

Great report Graeme, you did well to get any pics at all on a day like that, let along the good stuff you managed to capture. Love the shots 'cloud rolling down the glen' and 'across to big brother'.

I reckon you deserve a medal for not backing out

This is a great little hill and I much prefer your route up - even if it is a bit steep at times. I'm glad you got some views of sorts of stob dubh for all your efforts. Don't think I've seen anything but mist every time I have stood on that summit. Not sure I would have appreciated the wind up there. Good effort in sticking at it and getting to summit both of them in those conditions

Cheers chaps! Yeah Monty, Kev had a couple of grim weather days before this as well, although he did say he had cracking conditions up on An Teallach and co. at the weekend. I wonder how he got on today up on Ben Alder and co?

Good stuff guys- you made a good day out of a crap one! Good to know Kev's battling on- hope he get's a lucky window or two for his next round of hill bashing.

The wee bookil is a great hill- I have mixed memories of it though. Did the 2 tops seperately in 2 trips- in very different conditions!: I used the standard staircase route both times, but did like the idea of doing it the way you pair did- I parked at (I think) the same spot your car is in the pic when driving through Glen Etive one day and scoped out the SW ridge of Stob Dubh. Will go for that if do the hill again.

Glad you both managed to make the best of the weather

Ack... poor Kev. If he'd been a couple of weeks earlier he could have had a great Scottish hill tan by now

Great to see he's battled through though, sounds like a great effort. Does he finish on Speyside today?

Great effect both - Kev for battling on & Graeme for giving essential support.