Beinn a'Bheithir in the sun

Beinn a'Bheithir in the sun

I was camping at Duror with friends Bod and Val (on Walkhighlands) and Andy and Gill. Saturday dawned bright and sunny so it looked a great day for us to pay a visit to our neighbouring mountain, Beinn a Bheithir. Having two cars to work with opened up possibilities and we decided to leave one at the forest car park at South Ballachulish and drive on to Ballachulish village to start our traverse of this mountain range. We set off past the school and soon had amazing views of the north-east ridge of Sgorr Bhan which was to be our means of approach. Sgorr Bhan from the north-east

Soon the hard work began with the ascent of the ridge which became steeper as we ascended higher! The ascent of Sgor Bhan

Then there was some scrambling needed to take us forward. Looking down towards Ballachulish village

The ridge led us up to the summit of Sgorr Bhan and we found ourselves wondering how the round pink stone had arrived at the top of the cairn - presumably on somebody's back, as it wasn't from around there. The summit of Sgorr Bhan

From Sgorr Bhan the summit of Sgorr Dhearg could be seen rising up along the beautifully symmetrical ridge line. "That's the way to go!" Bod was heard to say! The walk along the ridge to Sgorr Dhearg was delightful. There was a real sense of space and altitude as we made our way up the narrow ridge line. 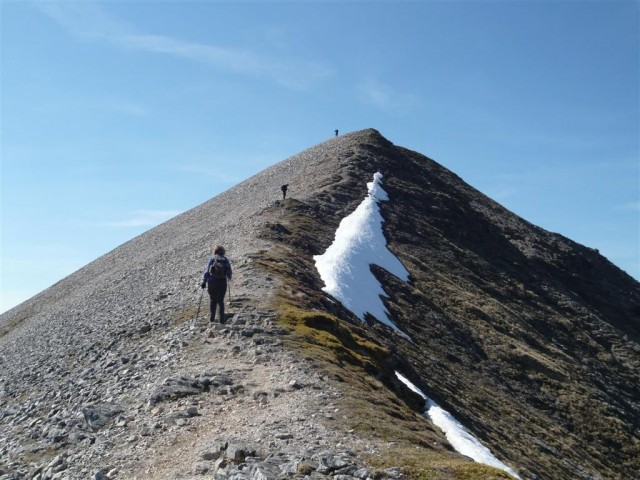 On the ridge to Sgorr Dhearg

Soon the team was gathered at the summit of our first Munro of the day. At the summit of Sgorr Dhearg

Setting off from the summit heading for Sgorr Dhonuill, the views to the west were stunning. From there it was downhill for a time on the way to Sgorr Dhonuill, passing some mystical looking stones on the way! The climb up Sgorr Dhonuill was grassy at first but soon we reached some rocky ground and there was a bit of simple scrambling again - but it wasn't as hard a climb as it looked at first from below. Soon we were on the very spacious summit enjoying the views again! And it was even less windy up there! The summit of Sgorr Dhonuill looking towards Sgorr Dhearg

From there we walked west heading for the beallach about 1 km west of the summit. The views out over Loch Linnhe were amazing! At the beallach we discovered our way down was a rather steep and unpleasant scree-filled gully which needed care on the descent. It is the way the SMC handbook brings you up to Sgorr Dhonuill - but it wasn't much fun! Maybe it would be easier climbing up it! The descent into Gleann a' Chaolais

Once down it was a straightforward walk on a woodland path and landrover roads down Gleann a' Chaolais back to our parked car at South Ballachulish. Looking back we caught tantalising glimpses of the ridges of Sgorr Dhonuill in the evening sunlight. It had been a great day out on Beinn a' Bheithir. Sgorr Dhonuill from Gleann a' Chaolais

great report redrock - you're fairly getting out and about these days

like the view of the "Sgorr Dhearg from Sgorr Bhan" photo

Aye....Redrock the report is looking great, we really were up there! Beinn a'Bheither gave real feelings of height with fantastic views

I particular enjoyed the initial climb from Ballahulish and maybe we could have explored sticking to the ridge all the way, but it did look like the majoriy take the wee sideways path and scramble back. We will need to go back and try the rocky edge some day, have some fun then retreat to the Clachaig for another beer!

rockhopper wrote:great report redrock - you're fairly getting out and about these days

like the view of the "Sgorr Dhearg from Sgorr Bhan" photo

Thanks rockhopper. I try to take every chance I can to get out on the hills.

Only problem is it seems to take me longer to put together a walk report than it does to climb a Munro!

Bod wrote:I particular enjoyed the initial climb from Ballahulish and maybe we could have explored sticking to the ridge all the way, but it did look like the majoriy take the wee sideways path and scramble back. We will need to go back and try the rocky edge some day, have some fun then retreat to the Clachaig for another beer!

Aye, the ridge up was full of variety and plenty of opportunities for scrambling, Bod!

But there was something very special too about ascending that long curving ridge up to Sgorr Dhearg. Geat fun!

Great report, and some stunning pics Redrock - particularly the "On the ridge to Sgorr Dhearg" shot