Arriving up at Pen-y-Pass just after nine on Tuesday morning wasn't exactly the most encouraging of starts to a day's walking I've ever had - raining steadily with heavy clag skimming not very far above my head. If not for the fact that the forecast for Wednesday - my other main walking day on this trip - looked just as bad, then I might have been tempted to turn around and go find something else to do instead. I loitered around at the cafe for about an hour in the vague hope that at least the rain might ease off a touch. It didn't, so eventually I talked myself into making a start.

My chosen route for the day was up the south west side of Glyder Fawr, then along the ridge eastwards towards Capel Curig, taking in the four main summits on the way. Starting out from Pen-y-Pass possibly counts as doing them from the wrong side, but given the conditions it was a relief to have a nice, straightforward ascent route ahead of me.


Glyders.gpx Open full screen  NB: Walkhighlands is not responsible for the accuracy of gpx files in users posts

The picture below, taken a couple of days later, shows what the route up should have looked like: The path up this side is mostly notional. Occasionally you get the odd stretch of what looks like a genuine path up only for it to peter out again a few metres later and disapper for a long stretch. It's mostly a case of just heading across the slightly wet ground to the south of Llyn Cymffynon towards the shoulder of higher ground in front of you, then picking the easiest looking grassy line of ascent from there. For the first half of the route there are helpful red spots painted on stategic rocks that tell you you're still heading the right way, but even when these run out route finding felt relatively simple and the going comfortable. In fact the whole ascent felt remarkable straightforward and relaxing for a mountain of this stature - some of the easiest and most effortless walking of the entire day it turned out. I guess starting from 350m up does help with that, and despite taking an easy, unhurried pace I found myself making Glyder Fawr's main summit plateau almost before I expected it. As always in conditions like this, once I'd actually got under way, I found myself enjoying the walking much more than I'd anticipated before hand - the sense of solitude and having the hills very nearly to myself for the day certainly helping that feeling. After wandering around in the mist for a while, exploring, I came to the conclusion that the rock formation above had to be the highest point. Moving on from Glyder Fawr's sprawling summit I soon found the eastern end of Castell-y-Gwynt looming out of the mist, the going becoming considerably slower as the ground became rockier and more heavily boulder-strewn. I opted for discretion (or the boring option if you prefer

) and bypassed it on the south side before rejoining the main ridge once past it, rather than scrambling over. The enormous boulder pile that makes up Glyder Fach's summit comes very quickly after this. For the sake of what little dignity I possess I won't relate quite how long it took me to painstakingly clamber and bum-slide my way up the wet rocks to the top and back down again

. In better weather I'm sure it would have been much more enjoyable, but in these conditions I lingered about two seconds flat at the summit rock and was quite glad when I had it behind me. As is traditional I then went and had a pose on the Cantilever stone. Descending beyond Glyder Fach, the rocky part of the day's walk was largely behind me. Onto the wet, grassy portion . . . Passing Llyn Caseg-fraith, the cloud lifted ever so slightly and everything became wonderfully still and tranquil for a time. I'd like to say something more insightful about the other two summits of the day, Y Foel Goch and Gallt yr Ogof, but by that point the cloud had closed in more thickly than ever, the rain started coming down much more heavily, and the wind got up again. Of the two, Gallt yr Ogof seemed like it would be the more interesting in better conditions, being somewhat the steeper and rockier of the two. At that point I kind of expected to have the most testing portion of the day's walking behind me and a fairly gentle stroll into Capel Curig left. Not a bit of it, however. Crossing Cefn y Capel the ground was very, very wet indeed with numerous small ascents and descents, and only the occasional vague hint of anything resembling a path - slow going, rather tiring, and seeming to go on for considerably longer than the map distance suggested it should. Finally emerging from the cloud cover between the crags above Capel Curig felt rather disorienting, and was certainly a relief. 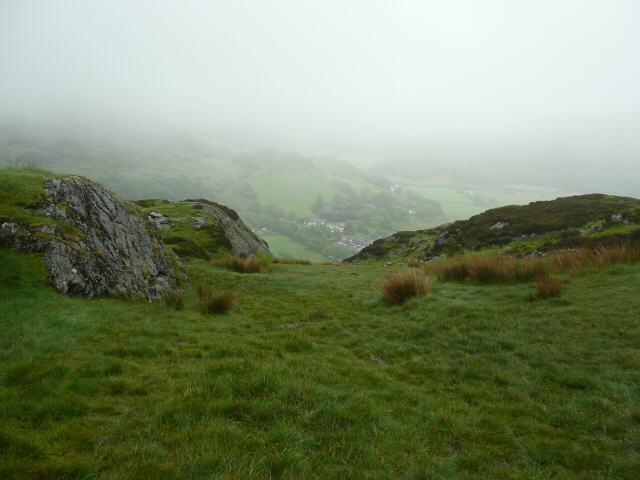 Picking my way down the slope into Capel Curig, despite the wet feet it felt like a hugely satisfying day's walking and I was very glad I didn't let myself give up on it before I started.

Good effort, really looked a miserable day. I want to do the Glyders soon, only hopefully in better weather !!

Enjoyed the two main Glyders even in the damp and mist - it's a very atmospheric summit ridge with all those odd rock formations. I'd definitely go back and do them again at some point when I get the chance - probably from the Ogwen side, and hopefully with a view next time