a.gpx Open full screen  NB: Walkhighlands is not responsible for the accuracy of gpx files in users posts

Well this would be our final route of our week’s trip. A big route to say the least but it had been in the planning for a while, and we were very much looking forward to it.
Our last few days had seen us Complete the South Shiel ridge, The Saddle and Sgurr na sgine. We also caught a Corbett and a graham on the same trip .We then had a days rest on Skye, and after a good nights sleep we were ready for Blabheinn.

Weather had improved greatly as the week progressed, we could only hope that it would hold for our big trip back on the mainland. So for the 2nd time we find ourselves camping at the Shiel Bridge campsite.

The route I planned would have been over 4000m, tough going with the big packs and would be made harder with the hot weather. My main worry was water, or the lack of it. Wilson would carry 1litre either side of his backpack and Julie and I would carry 1 litre each. I never expected to find any drinkable water once on the ridge….

We followed the Allt a Chruinn making several stops as we went, drinking deeply to quench our thirst. We would soon reach the bealach at the foot of Beinn Bhuidhe and once Beinn Bhuidhe was reached we would have a better view of what lay ahead. We were still quite a bit away from reaching our first summit of the day but once we did reach Sgurr Na Fhuaran the next 2 summits would fall fairly quickly with no real problems. If I do recall correctly there is a “bad step” prior to the summit of Sgurr na Ciste Duibhe. It looked pretty intimidating close up, but once you do get in about it, it was ok.
Well that was the sisters out the way we would now have to contend with the brothers. 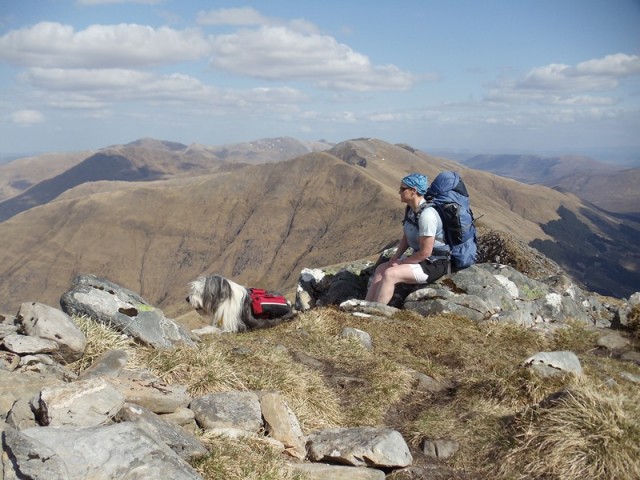 Saileag would be next; this was a nice easy walk. And once we reached the Bealach na Lapain the summit soon fell. Unfortunately for 2 guys that were in front of us, they decided to call it a day due to water issues, and headed for the road from the Bealach. We however had no such luck and had to carry on.
We still had 2 more hills to do and our water was getting low. We had no option but to ration ourselves. Sgurr a Bhealaich Dheirg would fall next but not without a final wee fight before the summit, a bit of clambering needed and careful foot work before the cairn was reached.
Then finally we carried on along the ridge and reached Aonach Meadhoin from there it was onto Sgurr an Fhuarail. We dropped off the North ridge to reach the Bealach there we would set up camp and stock up on our water supplies.
We all slept well that night after our long day. Every thing had went well and we had reached our camp spot “ the plan had come together” Wooo Hooo. Next morning Wilson and I nipped up and Climbed Am Bathach, by the time we got back to camp Julie had camp packed and breakfast ready. What a woman. We still had Ciste Dhubh and Ben Attow to complete before our mission was complete. Wind had now picked up a bit but it was still a fine start to our day. I only hoped the wind would die before we reached the trickier part of the summit but it never. I was actually on all 4’s at times. Wind on exposed ridges does scare me, so in times like that 4 is always better than 2. As we dropped of Ciste Dhubh we decide on popping into Camban Bothy, we never planned to but we were glad we did. Had a nice read of the bothy book several cups of tea and the last of our grub was just enough to refuel our bodies. We then took a bench outside and soaked up some rays for a good hour.

A group of runners appeared at the bothy for a bit. They were on a 5-day trip running from Inverness to Skye. Apparently they pay good money for that privilege.
www.runningthehighlands.com Packed up and with the bothy tidy we are on our way for the last time. We head for the ridgeline of Ben Attow directly behind Camban Bothy. But by the time we reach 550m it is apparent that Wilson is struggling… so we remove his rucksack to see if that helps and contour round the 550m line for about a 1km or more.
He did improve and am sure the lack of a pack pack did help. But in situation like this, Julie said “”the dog’s safety comes first ““ and I reluctantly agreed. So we catch the path and head out for a very fine walk through Glen Lichd.

Well Ben Attow you got lucky this time, will be back sometime soon to pay you a visit..

a couple more extra pics that i could not fit into the report. we have not been back in the hills since this trip, but judging by the weather that may be a good thing.

Top notch report and photos - and a massive effort to complete all that. Great to see Wilson starring on Walkhighlands once again, thought he looked great with his pack on but then he does look like he's been shot in the photo outside Camban bothy

Excellent stuff!! Those blue skies are like a distant memory now

Wow, what a great effort all

Not often you have to worry about water supplies in April. It was about time you got some Kinleyesque weather - looks like you made the most of it

Thats one helluva route dave,well done to you & your mrs and also well done WILSON turning into a real star on this site

epic report and photos dave - well done all of you

hey Dave !
Thanks for the photos and report, i enjoyed. Poor Wilson ! ^^
Did you find any fresh water between Saileag and Bothy Cam-ban ?
I plan to do this tremendous ridgewalk with friends on 8th of July (after Skye's Trotternish ridge, and before Carn Eighe) and to sleep in bothy if still possible.
So excited about this 2nd trip to your magic highlands and Scotland ! First time i climbed Suilven and Sgurr Mor. This year, 11 munros on the checklist...
Koma, a french friend of yours

Thanks for reading my report, I hope it helps you, when you come to do the ridge.
Water is a problem on the ridge (none at all) but if you are willing to drop down off the ridge you will find fresh streams.

We only found water on the way up at the allt a chruinn, nothing along the entire ridge at all. We also stocked up from a small stream as we headed for the bealach at the foot of cite duibhe, that was also where we set up camp for the night.

You will find plenty water as you approach the camban bothy. There is a river about100 metres south of the bothy.

Please enjoy your 2nd trip to the highlands. And if you get a chance, post a report of your adventure.

Dave,
I now got the OS map for this area and see all the streams flowing to Alltbeithe... The plan is Morvich->Cam-ban in the day (Sisters' Ridge and Saileag). 4 Munros in the bag !

If Wilson did it ...
I'll post after the journey a report on ;
- trotternish ridge
- falls of glomach
- sisters of kintail and saileag
- mam sodhail and carn eighe
- glen affric
- loch ness (the graham between drumnadrochit and invermoriston on the last day)
See you there !
Koma

hi,that`s some walkabout to take,great pic`s as well,the kind i want to do,can i ask what make of backpack wilson has and does it fit properly,i need to get one for my lab,dont you just hate it how easy they make it look and how they just stand and watch you strugling to catch up with them ?????