The drive from Strathfillan Wigwams to Fort William is just over an hour and the scenery is breathtaking. We were on the road later than planned, there was no point getting to Fort William before 9am as we had to buy Ian new boots as his had literally fallen apart the day before climbing to the bealach of Dot & Dorien.

Now we are as aware as anyone that climbing the highest Munro in Britain in spanking new boots isn't the best idea. However, having made this commitment to the charity and to the fuel companies that we paid lots of pennies to get us here, and the sleepless night with the apaches in the neighbouring wigwams, Mr.Biff was going up that mountain ... in his socks if need be. So there we were in Fort William parked up outside a mountain shop when I became aware that Mr.Biff hadn't even brought his damaged boots along. I smile weakly to the assistants who eye Ian with contempt as he walks in to their shop with his socks on. I can almost here them muttering ' bloody English come up here for the weekend and think they can climb our mountains in their socks'....... yeah well if it came to it, and actually that was a high possibility as we eyed their prices. This was a 'posh' walking shop!

It was at this point when Mark and I abandoned Ian and Brandon and headed up Fort William high street looking for a Mountain Warehouse, we like them, they are affordable and just think Ian is a daft eijit when he walks up the high street into their shop in his socks... well he is. In the space of time it takes Ian to choose a pair of boots I have an armload of walking paraphernalia (well they have a sale on and I am a stereotypical woman). I was so grateful of the excellent gloves I bought later on in the day!

Finally we were ready. We parked at the car park beneath Ben Nevis (£3 pay and display which is for all day) and got kitted up. The weather was cloudy but dry with hardly any wind, good walking weather!

Armed with map see: http://www.walkhighlands.co.uk/maps/map4_2fw.shtml compass, walking poles (thanks David, must buy my own!), first aid kit, 17 layers of clothing each including purple Erskine hospital t-shirts and banner, waterproofs, gloves, hats, water, water and more water, camera, ipod, gps, 10 travel bugs and chocolate we were equipped with all the essentials. 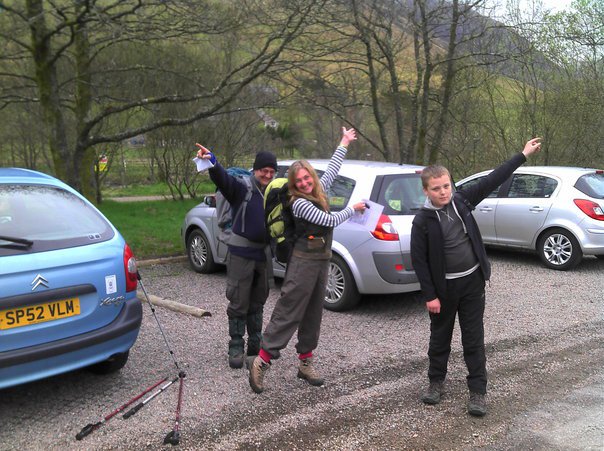 We stopped for regular water breaks and to regain our breath. It was amazing just how many people were coming off the mountain at this time (10am). Most of them were young, very fit men in their 20s & 30s, and some were in shorts with strong tanned muscular legs, they all smiled with their perfectly straight ultra bright teeth and said good morning as they dashed past like every good Lynz advert. I feel it important to describe the scenery at this point in such graphic detail ... oh yes and Glen Nevis looked pretty good too. Bringing up the rear MrBiff and Mark huffed and puffed their way up ... this made me think more of the stair lift adverts with Judith Chalmers......

About two hours in poor Mark was really suffering with a pesky ingrown toenail making every step a very painful one. We stopped for a bit and had a quick bite to eat before heading up the Valley of the Red Burn and passed Loch Meall an t-Suidhe, this stretch was kinder on the old calf muscles which were screaming. 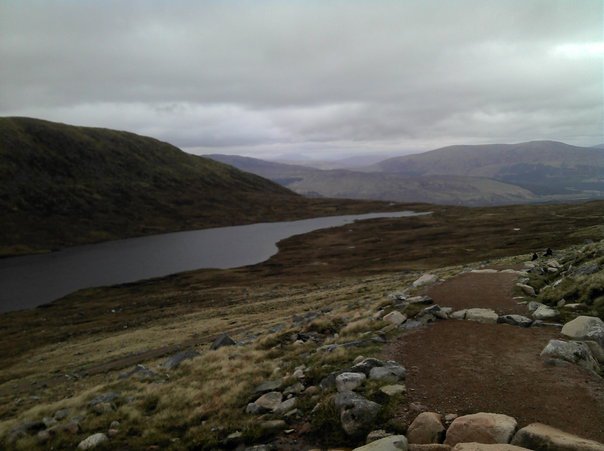 Looking back towards Loch Meall an t-Suidhe.

Onwards and upwards, the pace was slow and laboured. By Five Finger Gully Mark knew he couldn't go on, it was here that we began walking into the clouds and he had said that this would be his make or break point. With much regret Mark headed back down the Ben leaving Brandon in our care ..... oh heck, poor Brandon! 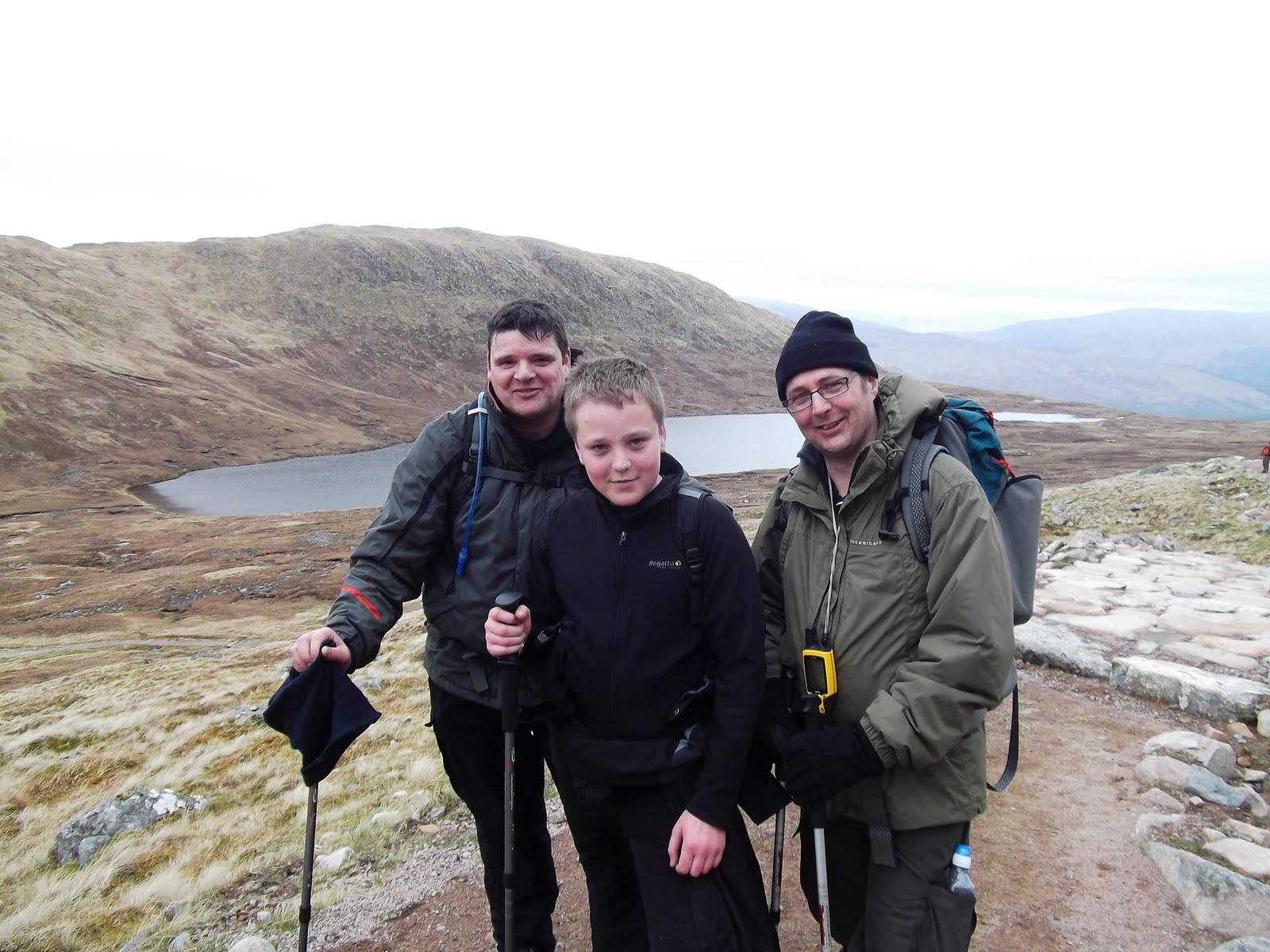 I'm starting to see a bizarre pattern emerging here, taking other peoples children up big, scary mountains! This happened before on The Merrick. The responsibility of which I do not take lightly. So we continued as a three, heads down, we ploughed on up through the cloud. At about 1100m we hit snow & ice, Ian and I pulled on our snow grips and I popped out my hernia AAAAAAAAHHHHHHHHHHHHHHHHHHHHHHH!!!!!!!!! Apologies to Brandon's mum Sharon, I swore lots! My hernia lives happily under my ribcage until I over stretch myself then it rips through my abdominal wall like a Tazmanian Devil, fortunately it pops itself immediately back in again leaving me feel as if I've been stabbed. Happy days! Only about 200 metres to go, piece o'cake right?!!!! WRONG! It took us at least 40 mins of arduous walking through deep snow, often up to our knees, I don't think poor Brandon had any idea of how deep the snow would be, and boy it was slippy! Our poles were essential and I am so thankful for the snow grippers we bought off ebay just the week before! Visibility became very poor, in places we could only see 10ft ahead of us and had to take care to keep each other in sight. Ian said he felt like Scott of the Antartic at one point as he looked up and saw us fighting through the snow in tandem with our poles helping us on our journey.

As a group of shiny, red faced young men (did I mention the scenery?) came towards us I asked 'how much further?'
To my utter delight the reply came 'it's just there!'
I replied that if I had the energy I would have hugged him. So after four and a half hours we were there, we'd made it ... we were shattered!

Doing it for Erskine Hospital 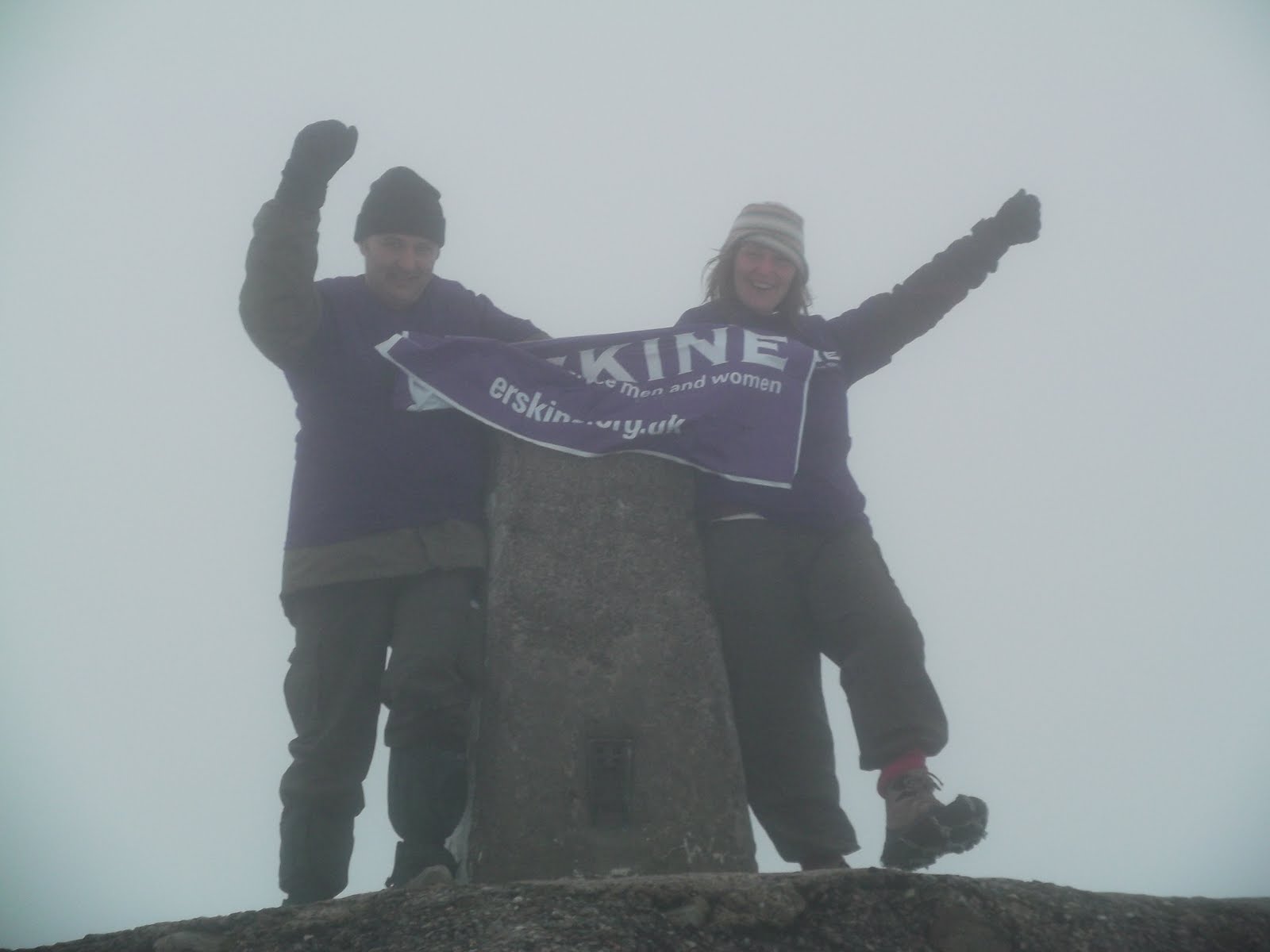 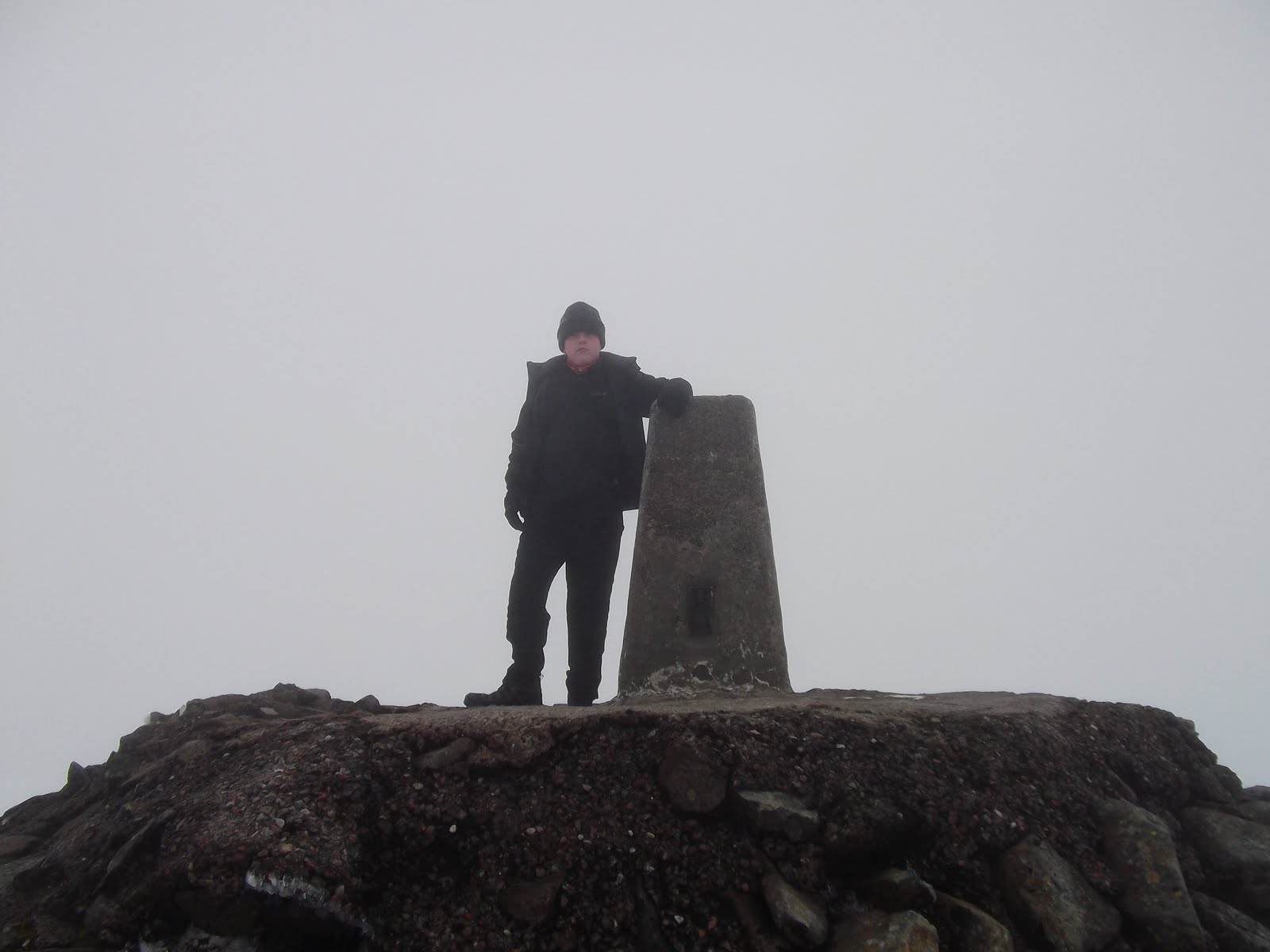 Brandon at the Summit of Ben Nevis
Our photos aren't great, and we didn't take many as it was just so cold and the viewing screen was freezing over! 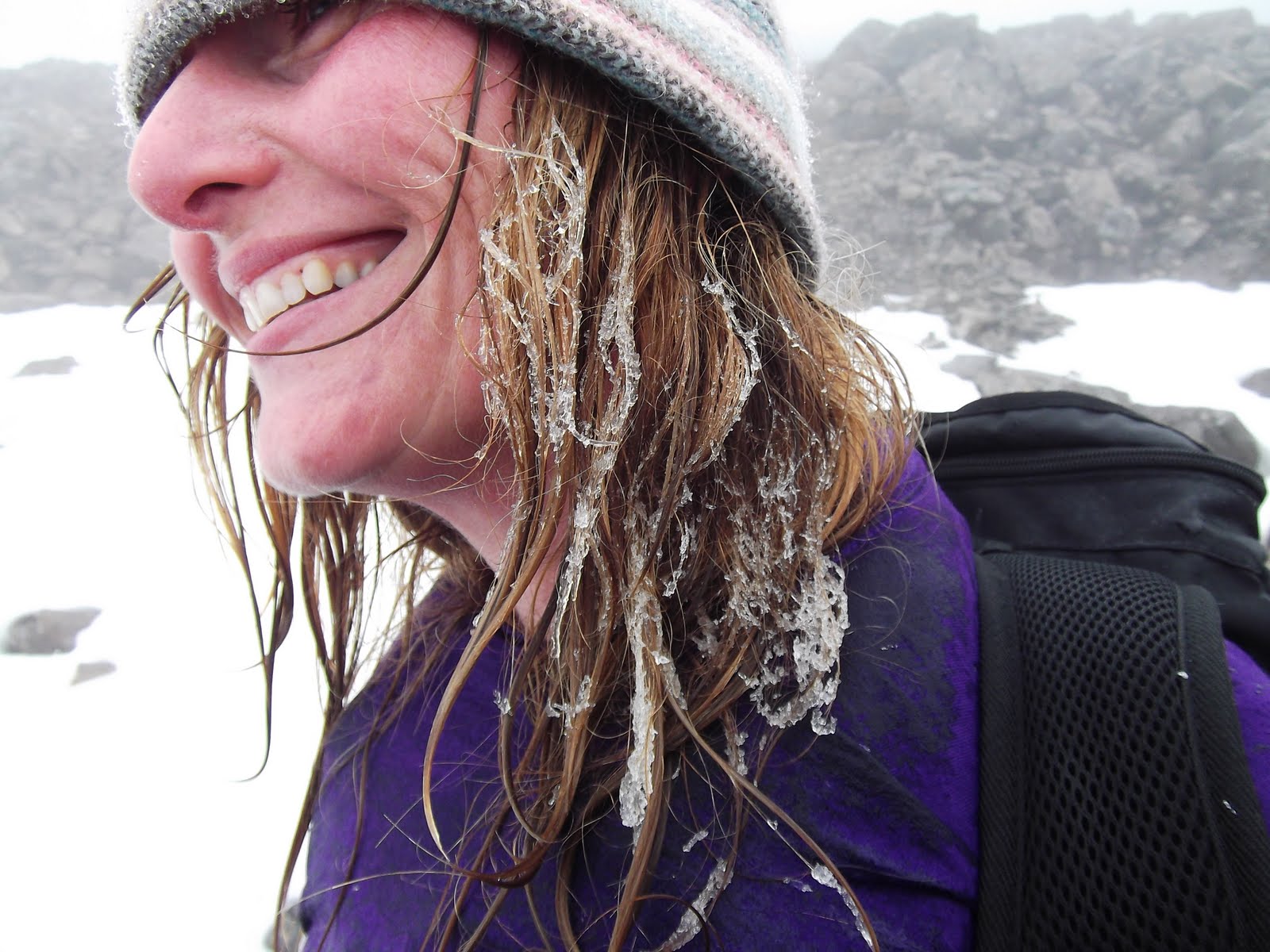 Frozen hair!
Ian and I were looking at photos today of Ben Nevis in the summer, judging by the height of the wall that I am sitting on we reckon the snow & ice must have been about 4ft beneath our feet. I didn't feel as exhilarated as I thought I would have at this point ...... we still had to get down in these conditions. Coming off Ben Nevis in poor weather conditions has been the cause of many fatalities, lack of visibility causes people to wander off the edge and down Five Finger Gully..... now we didn't want to do that! I started to have a bit of a panic when I saw that most of the people on top had left the plateau and were disappearing forms through the freezing mist. So after about 15 minutes on top Great Britain we headed back down the mountain, very, very cautiously! We made sure we kept to the right of the cairns we had passed on the way up and we stuck together in a straight line moving slowly through the snow. After what seemed like an eternity we picked up the path, so we were doing ok so far! Then another whiteout .. this continued for a while until we finally left the snow and were securely on the path. This was when I could have skipped down the mountain I felt on such a high! All I could think of was the Wonder Woman theme tune, which I sang for an annoyingly long time .... ask Ian who affectionately named me Wonder Goat. 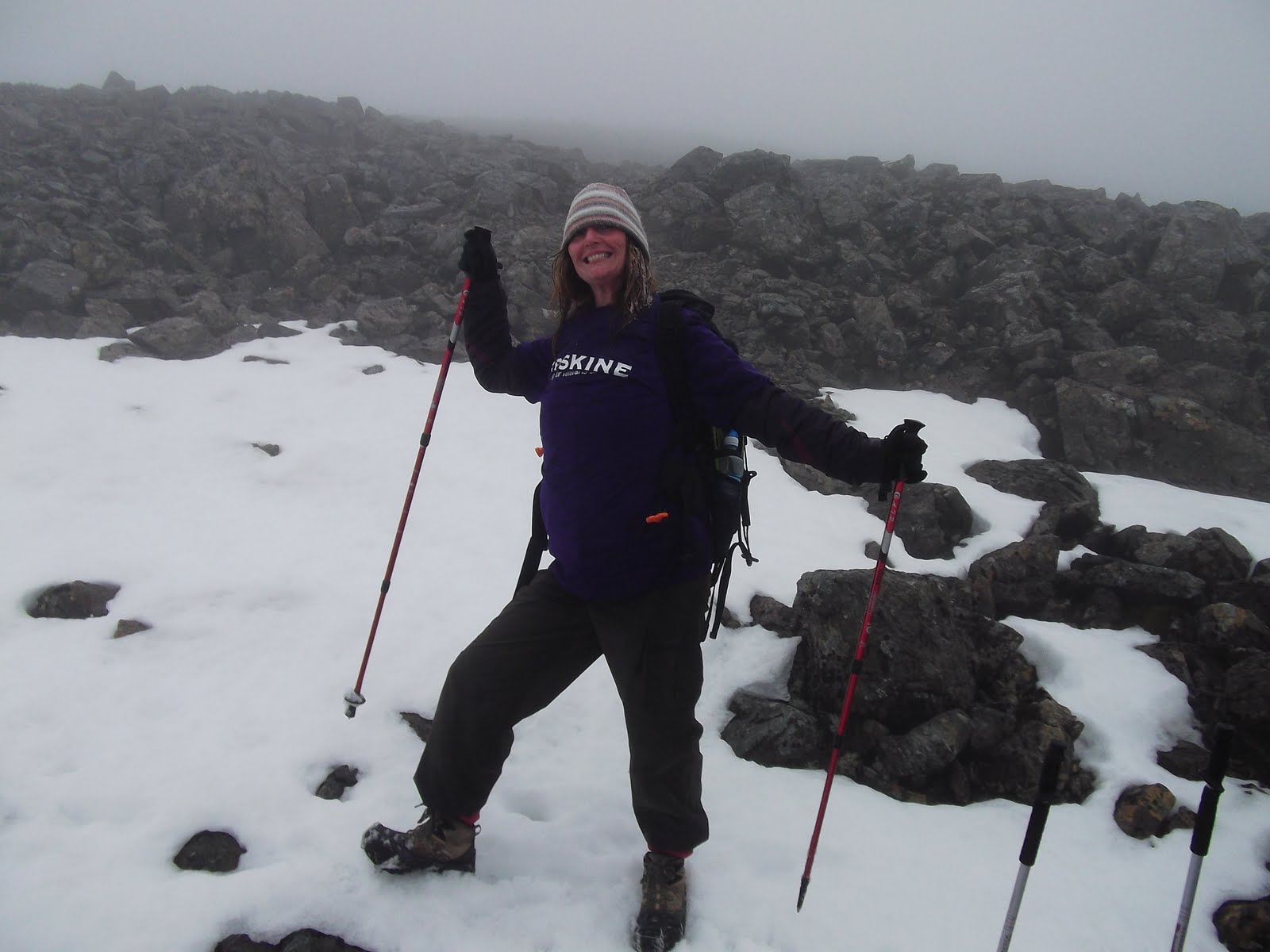 The hike back down was a killer on the knees but pah! I laugh in the face of pain! We did pass about 10 teenagers on the way up the mountain dressed in jeans, hoodies and trainers and not a rucksack between them. I don't think they believed me how deep the snow was above until I showed them where the water marks were on my trousers....but onwards they went, completely insane! 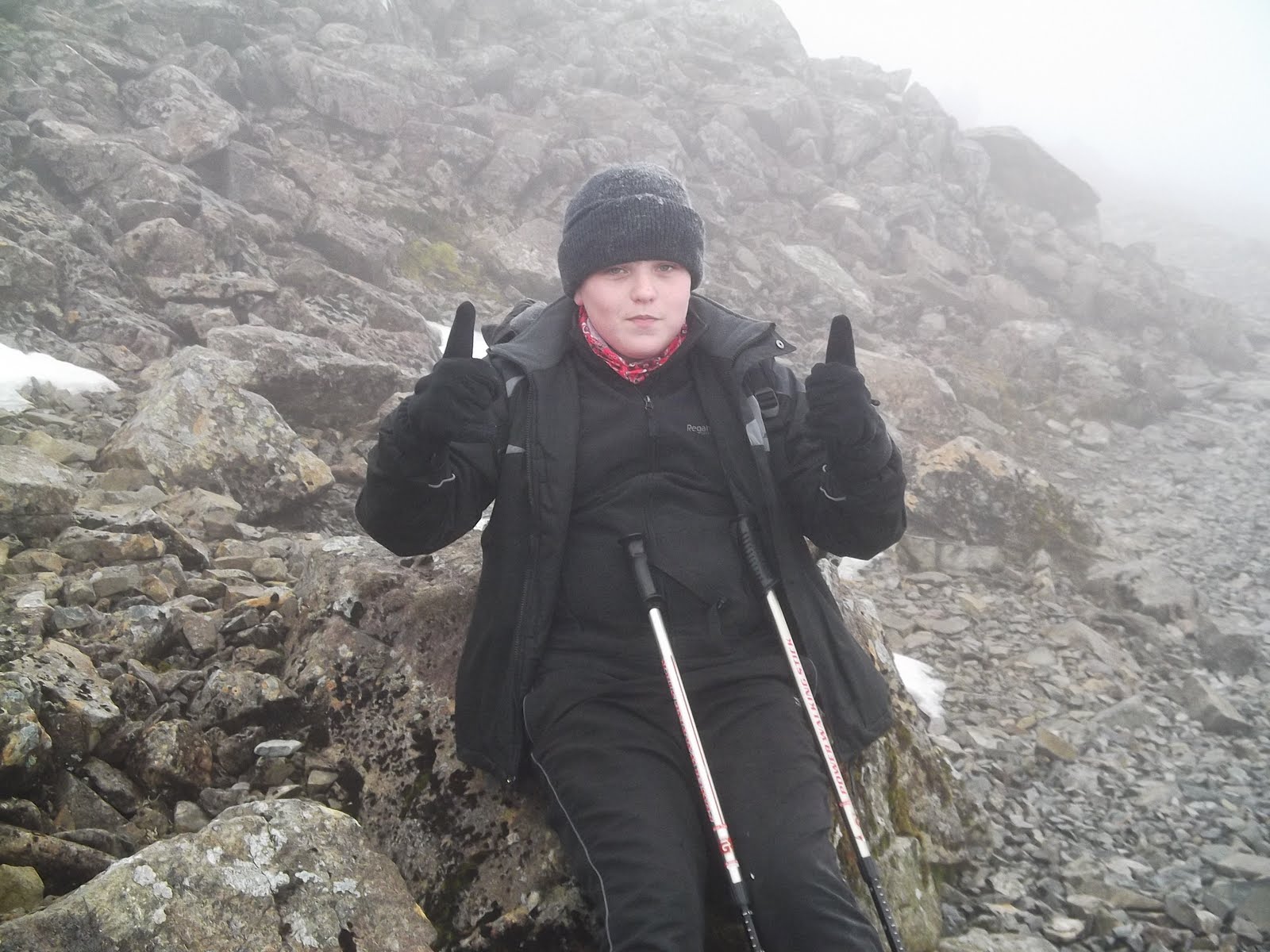 Biff of the Ben! 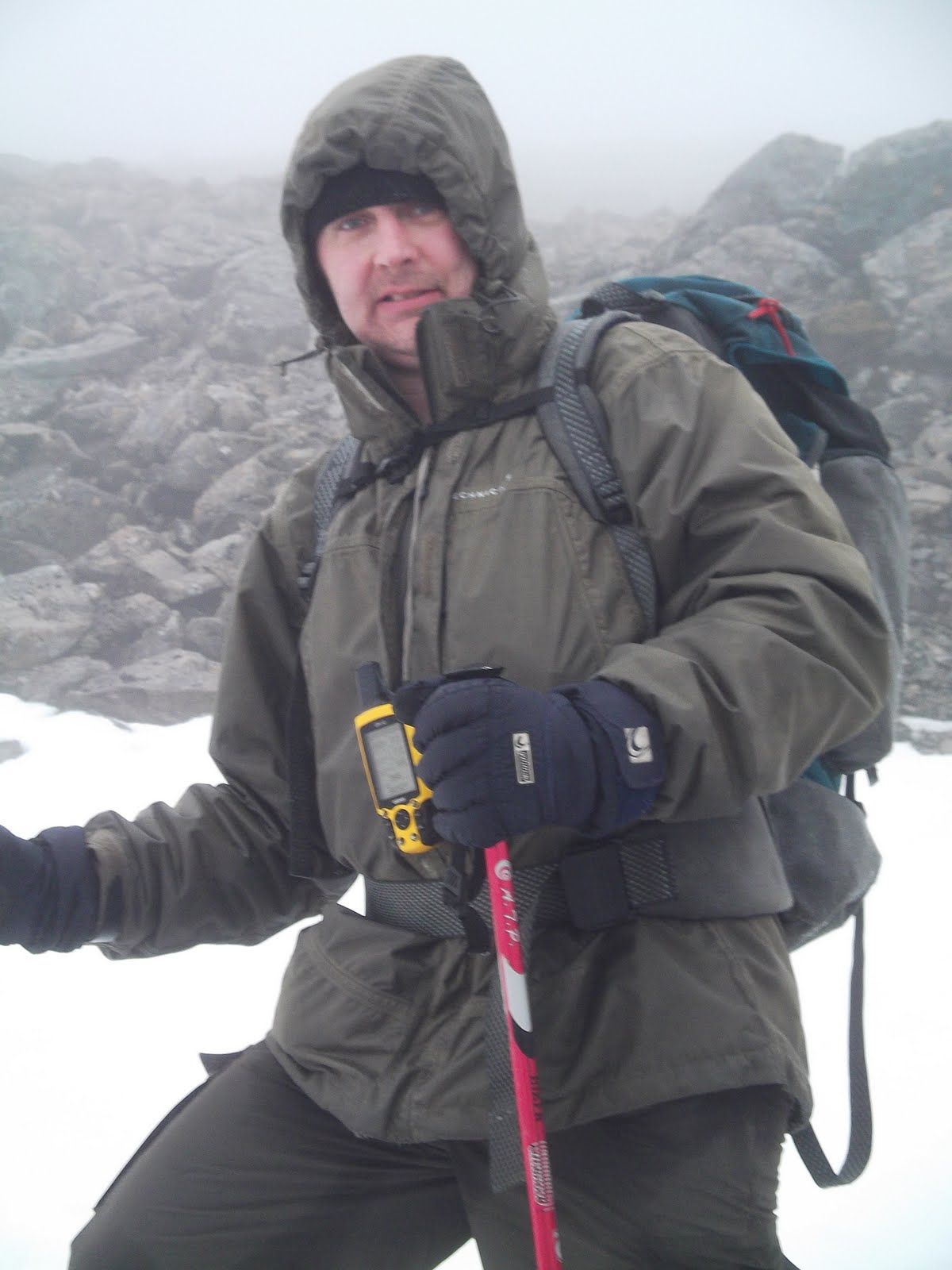 As we headed back down I think we all felt such a massive achievement, and indeed it is. I know people call it the Tourist Route and thousands traipse up the mountain every year, but I feel that to have done it in April while still thick with snow and ice was a real feat. Yes I know that it gets way worse than what we encountered but I still feel really pleased with myself. 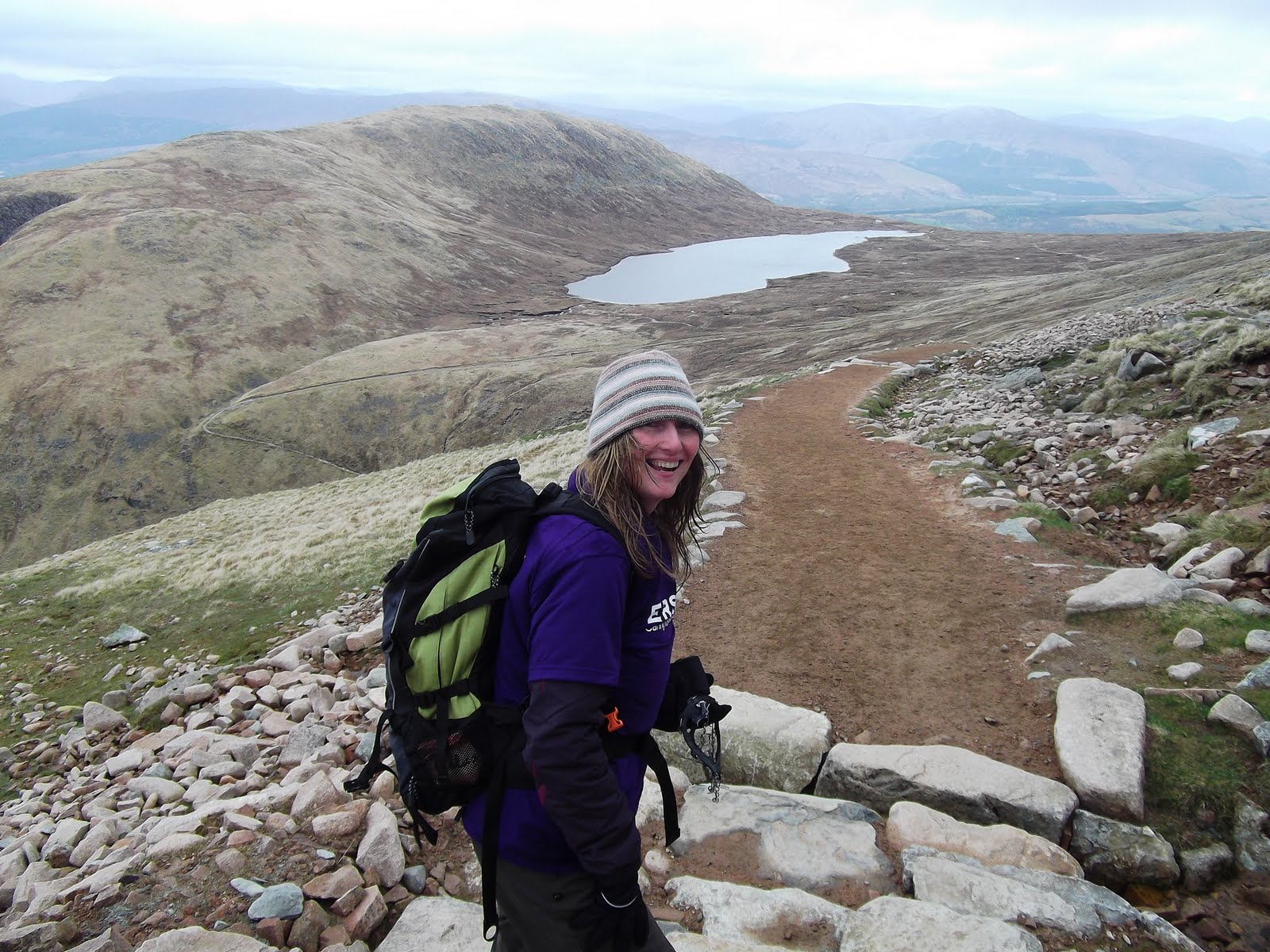 I can see the pub from here! A favourite catch phrase of the day!

On the descent I declared that we all deserved a really good 'man food' dinner and I fantasized of Steak pie, chunky chips and onion rings ....... Paddy pub in Tyndrum supplies a mean dinner and we'd earned it! 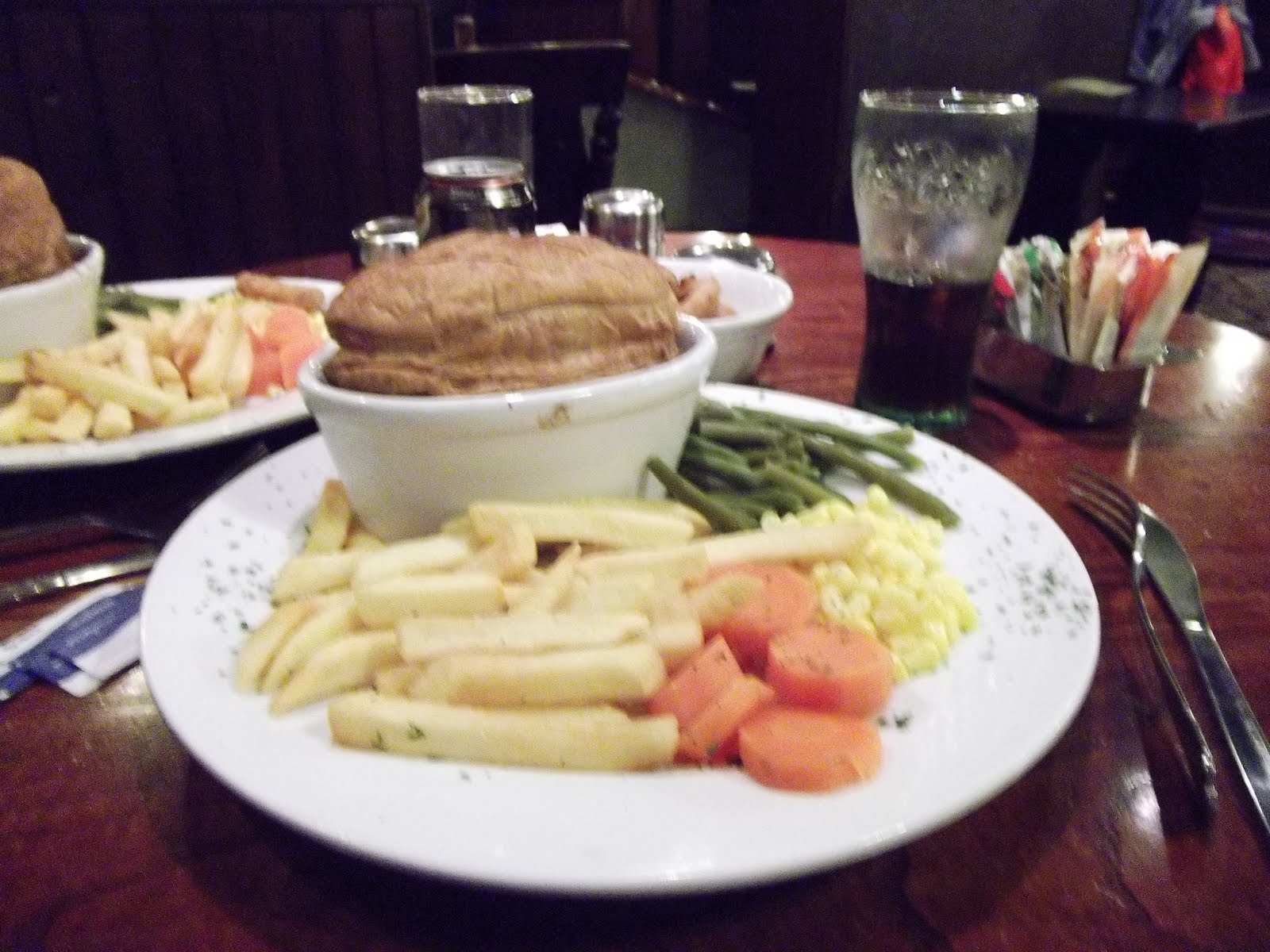 We did this track last September and I hated it! We didn't have any snow, just a wee bit ice at the top. It is just so boring! Admitedly the views are pretty amazing but if you stop for a minute you get elbowed out of the way by the hordes of people coming and going!! Especially those on the 'three peak challenge'!!!

Will definitely climb the Ben again, but not by the tourist route!

Well done for staying so upbeat despite everything

Well done, great report and I think you should be very proud of yourselves.

A fine report and a great achievement irrespective of route taken, you can all be proud of achieving this (and I bet you could take a world record for fast pie eating after it too) I know I would have

Great report and those pics really tell your story. Oh and a pie like that demands lashings of gravy!

Thanks to you all for the support! And the pie...oh yes it was superb!