Easter Monday on the Ben

Easter Monday on the Ben

our_route.gpx Open full screen  NB: Walkhighlands is not responsible for the accuracy of gpx files in users posts
Retrospective report- since the weather of late has been dire, just thought I'd remember my last fair-weather walk. Apologies for my verbosity, I tend to waffle, so feel free to miss out the boring bits and just look at the photies

Easter Monday- decided with my (infinitely fitter- more on this later) wee brother to head down to Fort Bill & tackle Ben Nevis, swithering whether to ambitiously try the ledge route, or the more pedestrian(!) CMD arete. Sadly, lack of foresight meant that we neglected to paint up some boiled eggs to fire down the North face, in the tradition of this holiday- I'm sure that the local ecology benefitted from this complete glaikitness on our part. Ho hum.

Having arrived in Fort William at 9am, we wasted no time in hanging about at the car park. Hmm, we thought, looks a tad misty up there. "It'll seen burn aff!" we cry, optimistically, before yoking up & plodding up the path towards what must be the most lusted-after pub in the land.

Ten minutes later, sweat gushing off me, I plead for a more staid pace, citing Naismith's Rule and the excuse that hoofing up the path at the bro's fearsome pace will negate our enjoyment of this beautiful part of the world. "Fit?" quoth he, from the horizon. Eventually the bugger slowed down, with much huffing and puffing and eye-rolling, on my and his part respectively. Despite my evident knackeredness, I'm fair enjoying the views, having spent little time in Lochaber. As usual I rely on my 'phone camera to take a few snaps, providing further respite for my protesting lungs.

The clag appears to be disappearing as we plod up the pony track towards the Red Burn, although I begin to notice the walkers we hared past earlier on the walk begin to smugly overtake my sweating, gasping carcass. Thankfully, we reach Lochan Meall an t-Suidhe and the going flattens out, just as I catch my second wind. We take the left-hand fork in the path to head round to the North face; a small party of trouser-suited Italians appear to be lost at this junction, unable to decide which path to take. As we confidently stride off towards Coire Leis, another party continue up the pony track, fuelling their continental considerations.

Just around the corner, we stop for a bit of head-scratching, as someone has abandoned a dirt bike by the path. Can't see anyone who has obviously lost such a machine, and we fail to fit it into our rucksacks, so it's left as is. Presumably it's long gone by now. 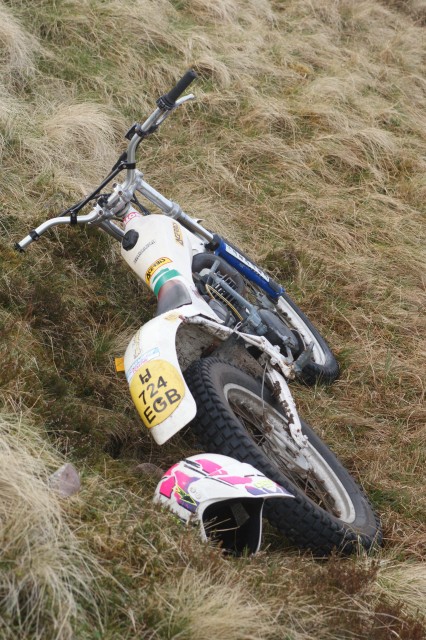 The madding crowd thins out entirely as we descend into the corrie, aiming towards the CIC hut and snapping away at the crags, enshrouded in an ominous grey clag. By now, I've caught my second wind and cheerfully woof into my sarnies whilst discussing our choice of route from here. The CMD arete tempts us, so we make vague commitments to try the ledge route "some other time". Ascending the slopes of Carn Dearg Meadhonach, we spot a couple of the aforementioned Italians eyeballing us suspiciously from below, heatedly debating (we presumed) whether patent-leather was the best choice of footwear in this environment. An uneventful but leg-warming hour or so later, we were welcomed to the ridge proper by a gust of wind which sent us diving into rucksacks in search of cosier apparel. Suitably attired, we marched happily towards the pointier bits of arete which had materialised from the lifting cloud, framed on one side by a remarkable view south over the Mamores, and on t'other by the fortress that is Ben Nevis. 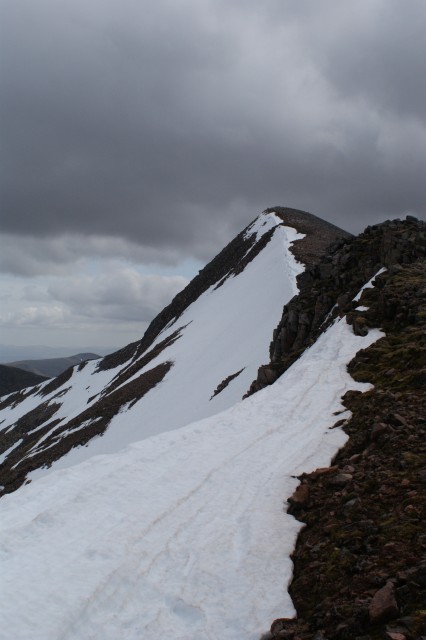 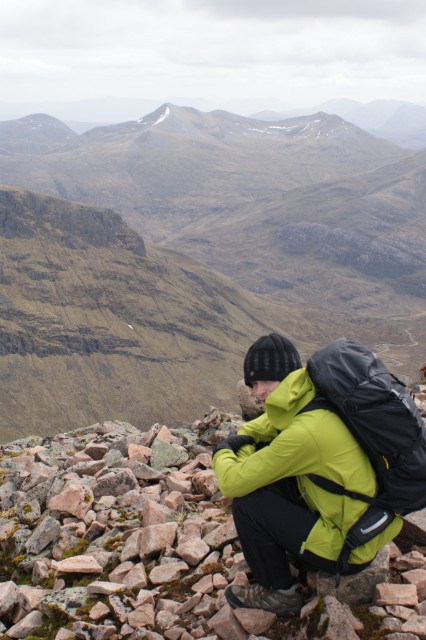 Scrambling over the ridge, for the most part, provided an entertaining approach to our objective. My constitution was momentarily damaged by the suddenly very narrow, exposed, unavoidable gangway of rock towards the southern end of the ridge. Shuffling on one's arse made light work of this 6-foot obstacle, and I chugged merrily on my way, soaking up the spectacular surroundings. By this point the sun was out, the mirk was gone and the faint haze in the distance only served to improve our sense of perspective as we guessed at what familiar hills we could pick out from afar. 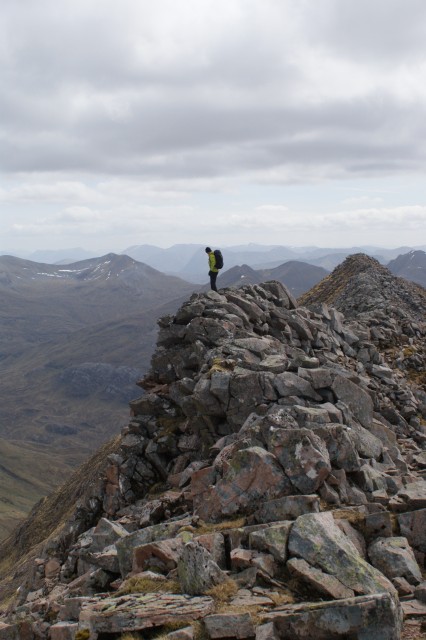 The final 500ft of ascent involves a gentle stroll through a boulder field on the South-West side of the hill; an occasional glance backwards at the expanding vista of hills is well worthwhile. Suddenly we arrive at the summit, still capped in snow and not quite as crowded as I'd expected- there must have been about a dozen folk spread amongst the ruins and cairns. No sign of the Gucci boys & girls, though. We were treated to a buzz by the yella helicopter, low enough overhead to give a bit of a downdraft; my attempts to flag a lift were misinterpreted and a cheery wave from the crew was our only response. They didn't appear to be in any hurry, so we assume they were just on a "runny oot", being a cracker of a day an' a'. 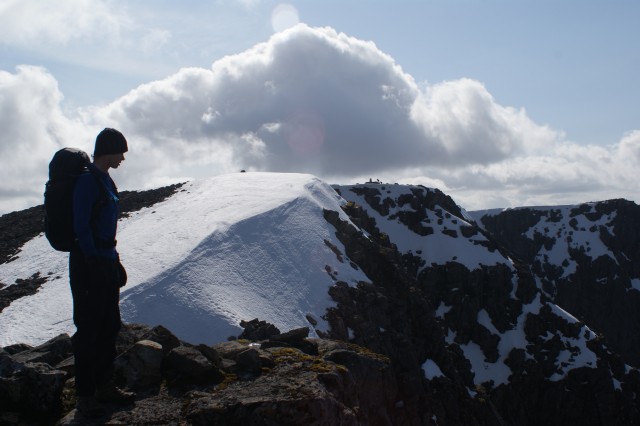 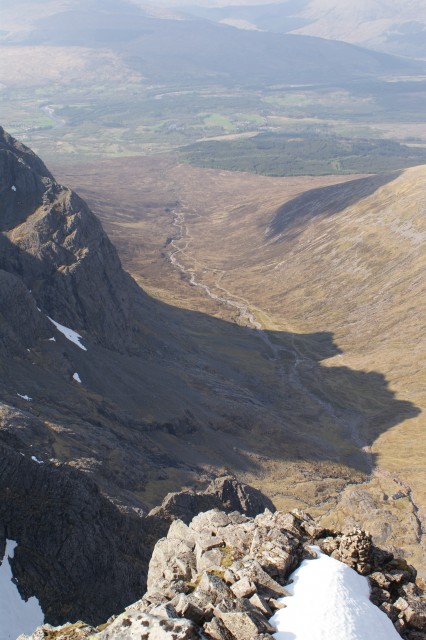 After a wander around the summit and the obligatory climb to the trig point, we began the walk back down the pony track, a fairly unexciting but not unpleasant plod back to sea level, passing those still on ascent and admiring the assortment of baseball boots and trenchcoats wandering by. Back to the car & through to McDonalds for a well-earned lardburger, before the 2-hour drive back to sunny, flat Aberdeenshire; a fine day out and a spectacular introduction to our highest peak.

Nice one !
Sure you didn't use the trail bike to assist the ascent

Brilliant report jalopey81 - really enjoyed the 'waffle' and the pics - some funny stuff in there, well worth the read

Belgian_Hiker wrote:Nice one !
Sure you didn't use the trail bike to assist the ascent

Rats, never thought of that!

Great report jalopey, still plenty of snow around then.
Gotta love those Italians and dirt-bikers.

Note to self: must google how to hot-wire dirt bikes.