This wasn't quite the walkhighlands route as we decided to take the bikes. We parked up at the parking area mentioned on this site, then set off on the bikes down Glen Locky, a fairly easy cycle for anyone wishing to do the same. After about 6km on the bikes we locked them up against a fence just after Betavaime at the point where the main track is left and starts to climb. Rather than climb Sron nan Eun from the top of the this track, we turned left following the upper track for just under 1k. Here we left it to climb the steep slopes of Sron nan Eun, missing the crags to the eastern side. There is no marker cairn indicating where to leave the track and no path either, not until you get onto Sron nan Eun ridge where the path takes you to Creag Mhor summit. We left Creag Mhor in a nne direction to avoid the crags then turning nnw crossing the valley below to climb up Stob an Fhir-Bhogha and onto Beinn Heasgarnich, there is a path once you start to climb Stob an Fhir-Bhogha all the way to Beinn Heasgarnich. From Beinn Heasgarnich we headed back the way we came to the halfway point of Beinn Heasgarnich and Sron nan Eun, leaving the path to drop down to the 909m point and down its ridge, back to the track and the bikes. All that was left to do now was cycle back to the start.Beware of the bull though just before the last fence. When i cycled through it was lying down and i just thought it was a fat cow but by the time the rest of them came through it was on its feet.
The weather was good to us as the Killin forecast was heavy rain showers in the afternoon and all we got was a light 5mins shower, though as we did the walk looking over to the Bridge of Orchy hills, Ben Challun and Breadalbane it was pouring down. Our guardian angel was looking after us today 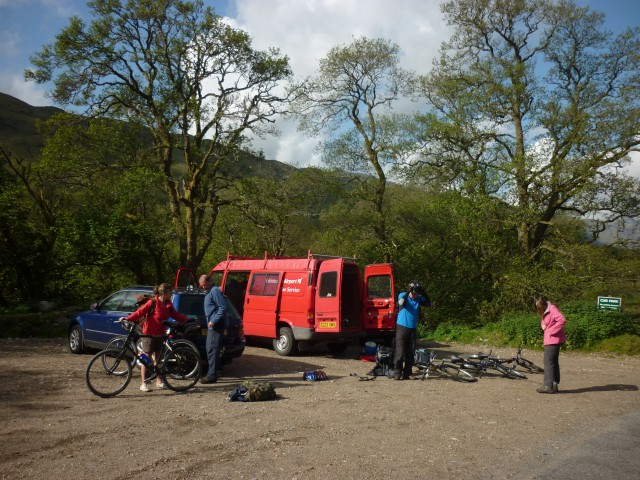 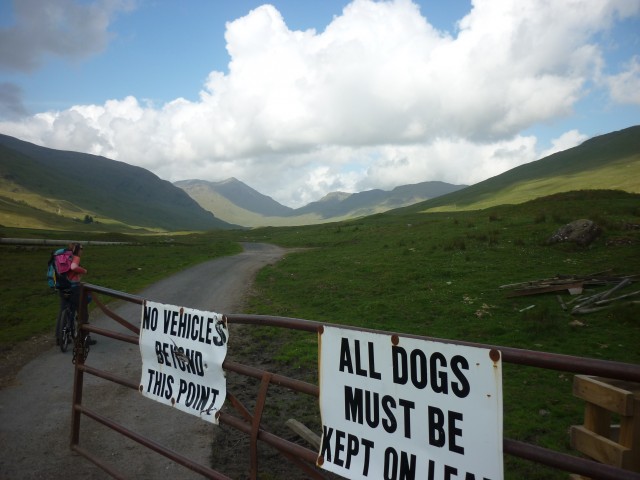 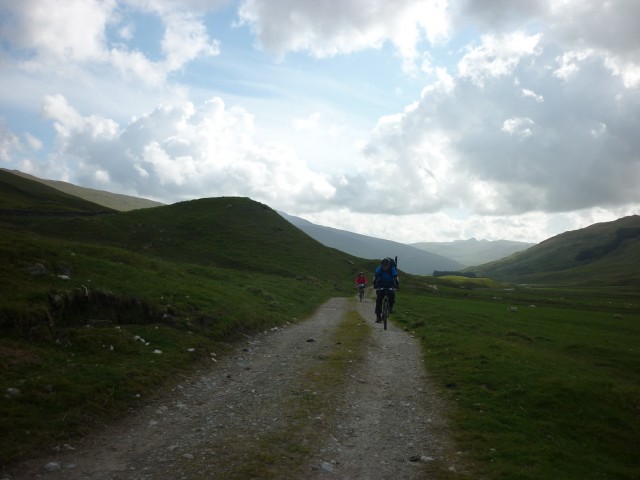 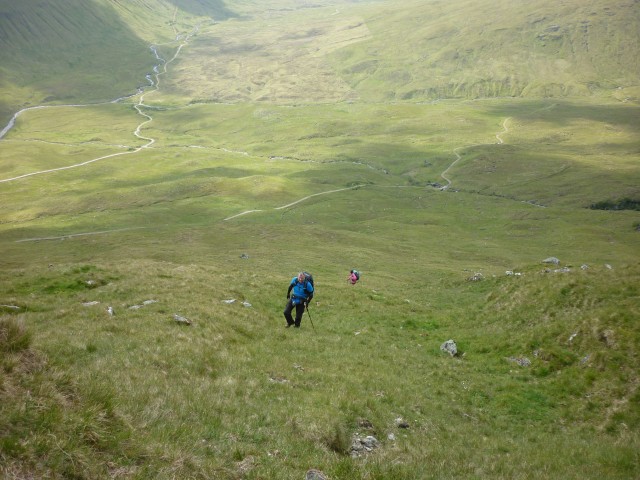 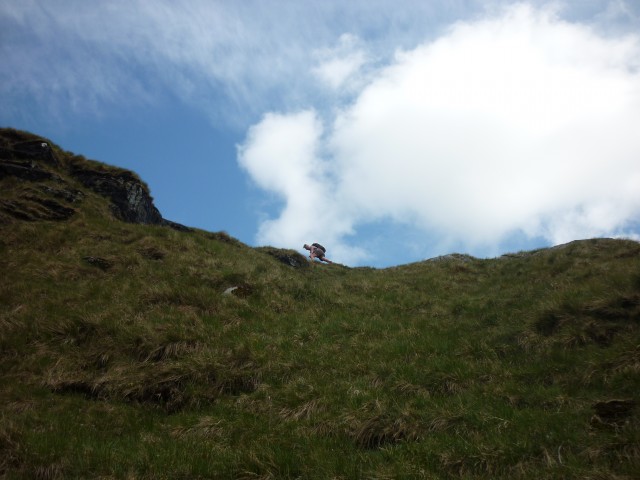 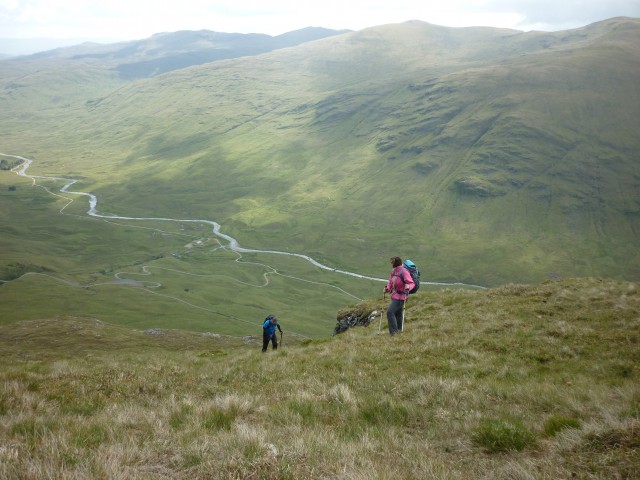 Kim & Alan getting there 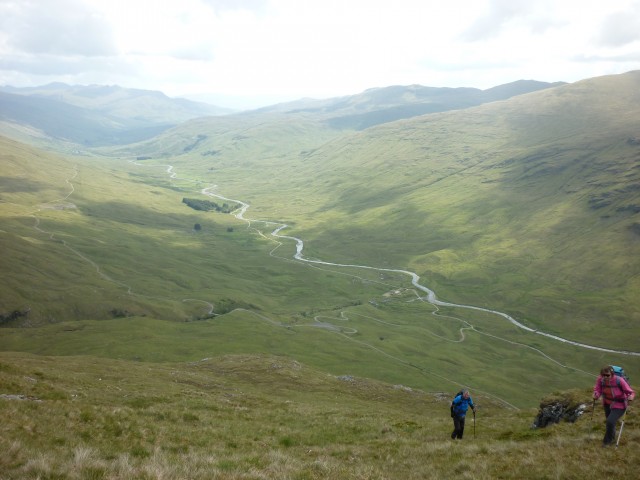 The view down Glen Lochy 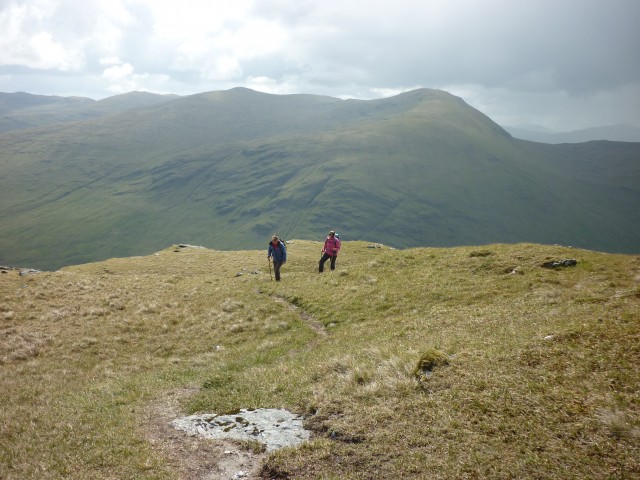 On flat ground at last 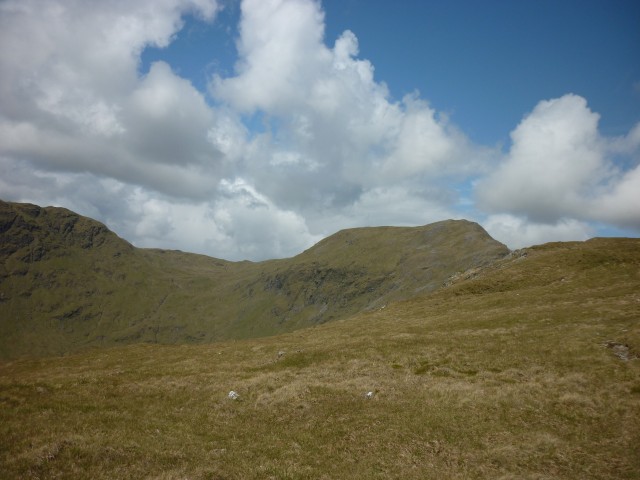 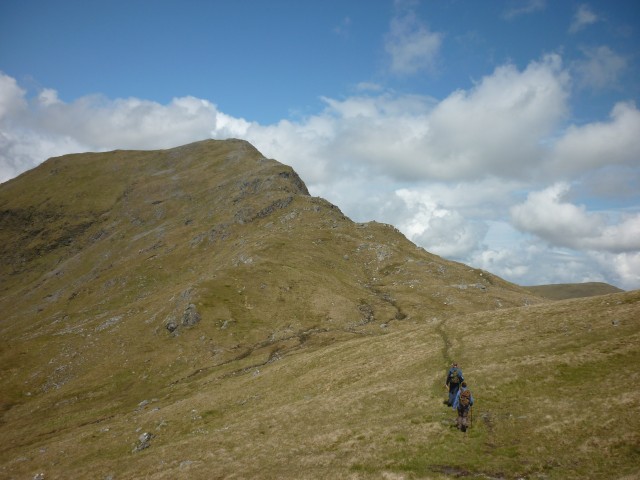 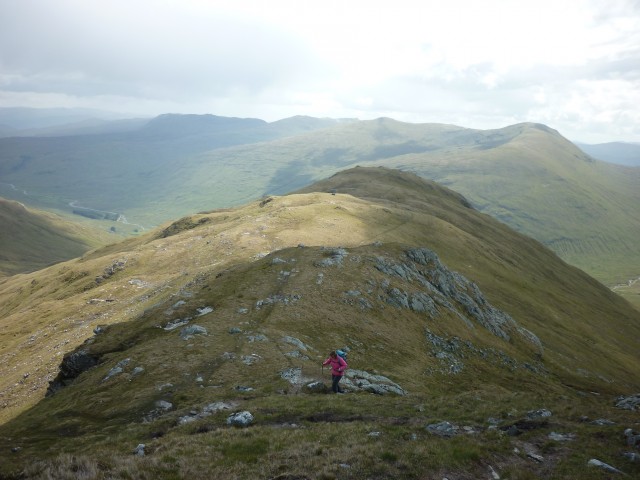 The view down the ridge 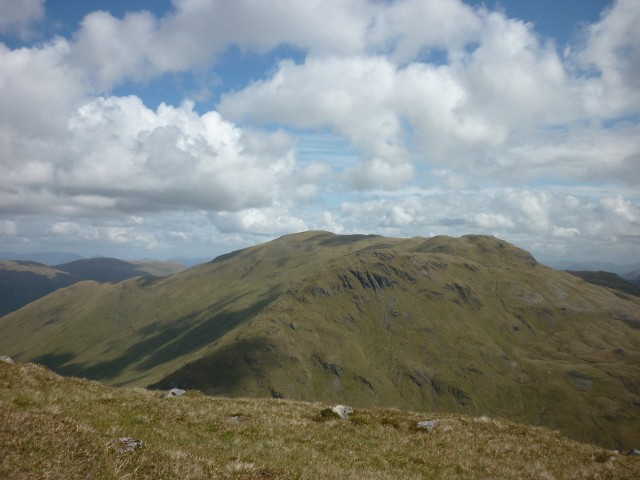 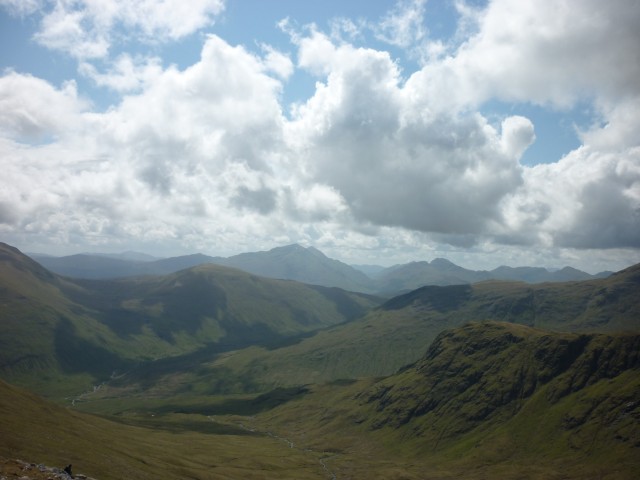 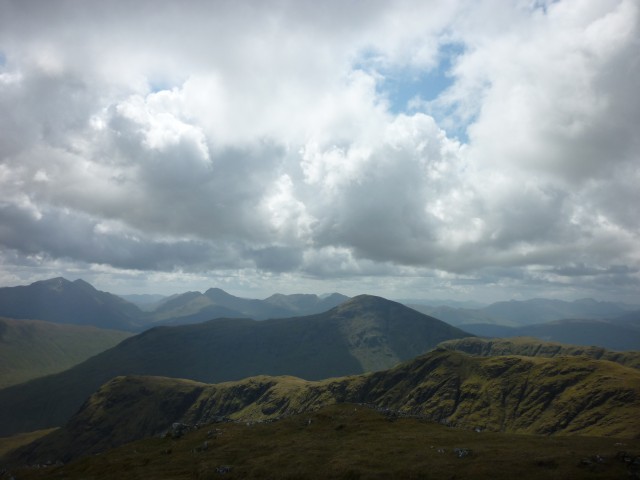 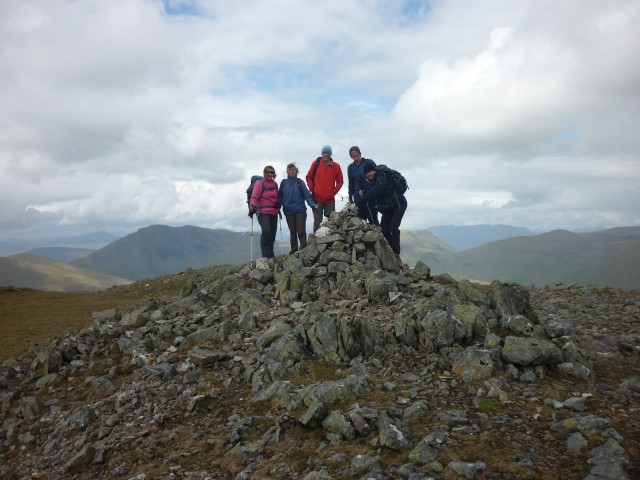 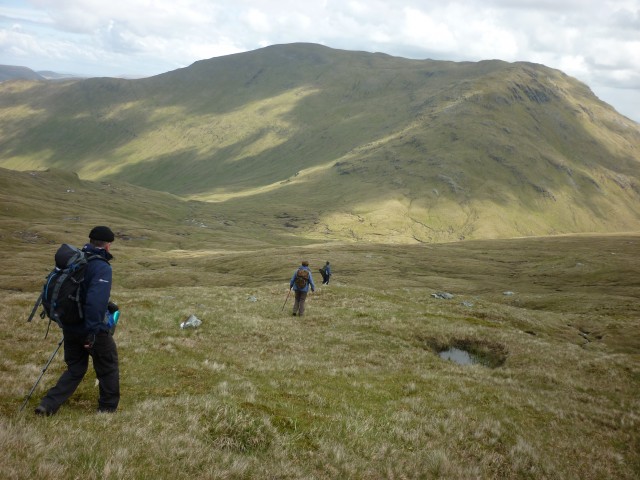 The route from Creag Mhor to Beinn Heasgarnich 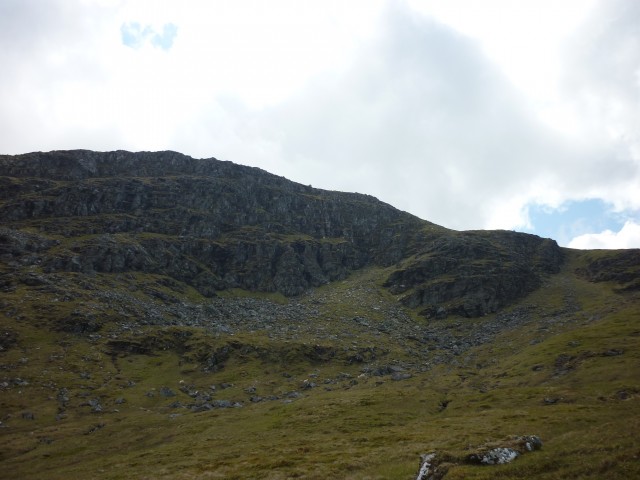 The craggy slopes of Creag Mhor 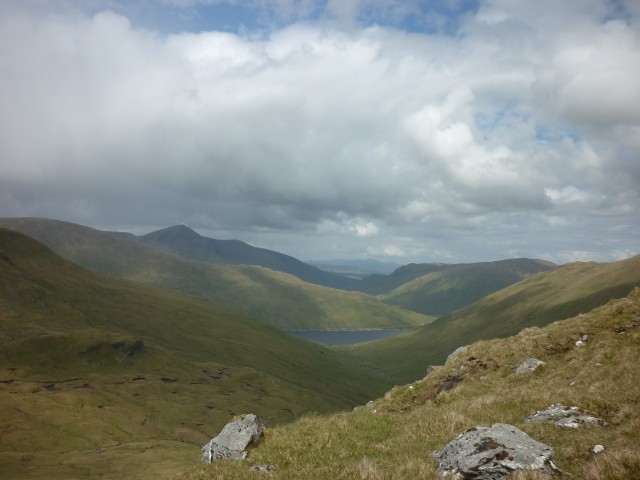 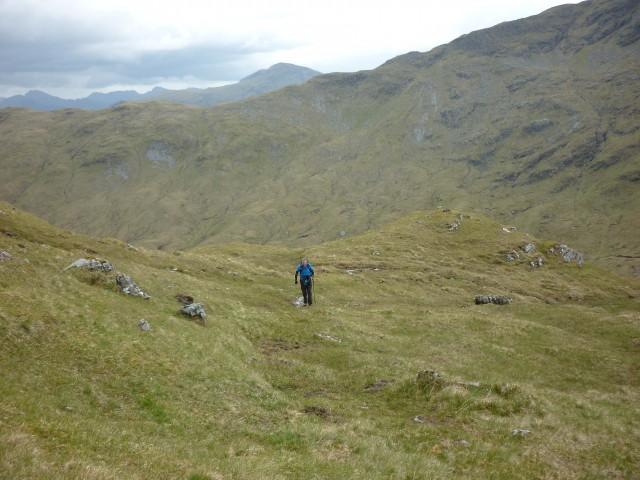 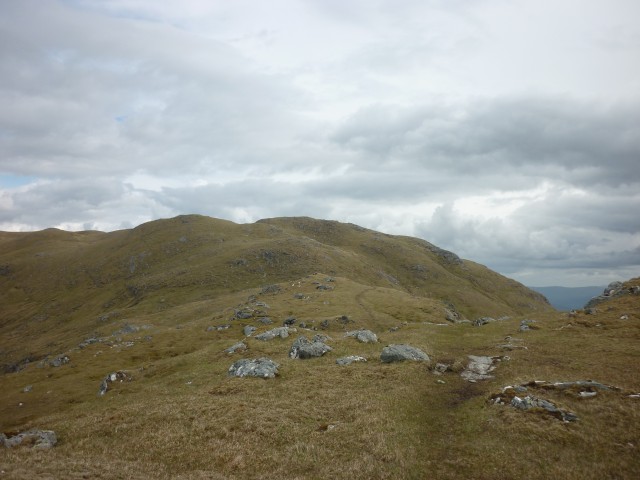 The path to Beinn Heasgarnich 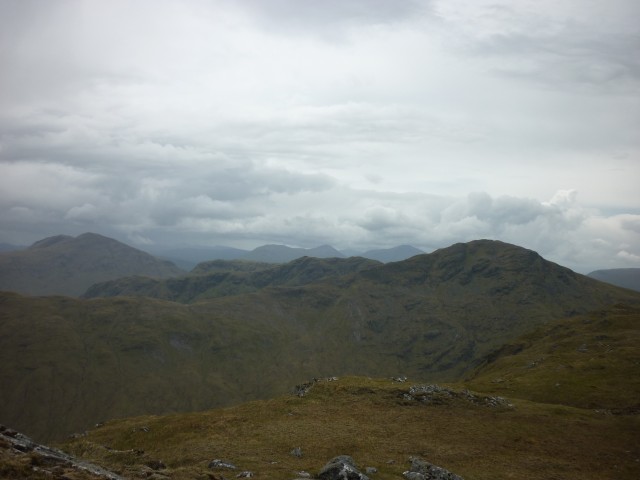 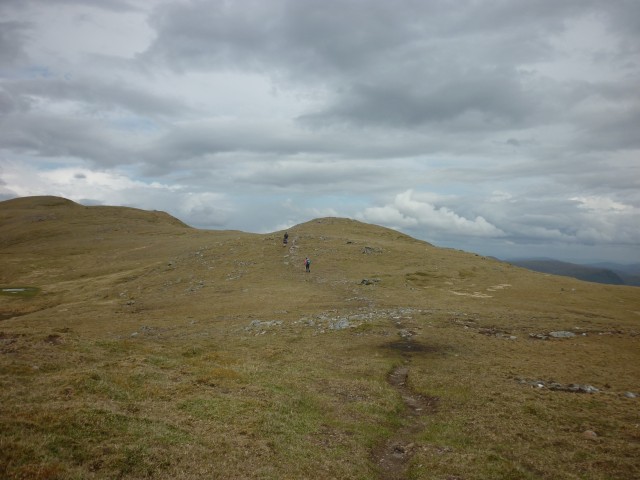 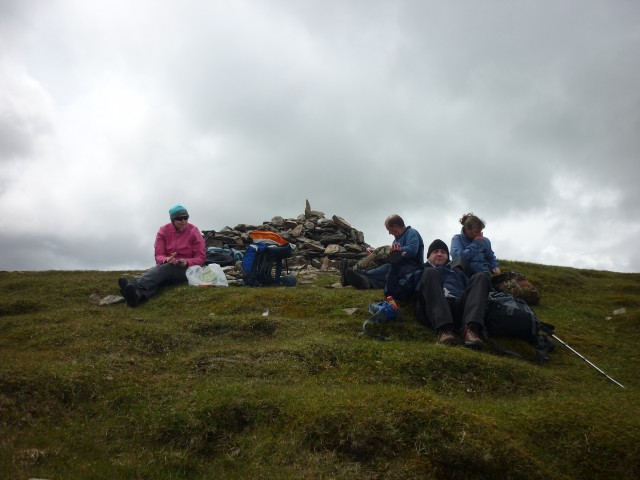 Having a break on the summit The summit photo took by a fellow walkhighlands user

Inreresting route using bikes - I'd thought about it but couldn't really see how it could be done without a bit of doubling back. Weather wasn't great when I was up earlier this year - good to see what I missed

Nice walk Johnny,
Interesting route for these two. I wondered how bikes would help but you seem to have managed it. Done a bigger route last august around here
http://www.walkhighlands.co.uk/Forum/viewtopic.php?f=9&t=6519

Nice report JC - some great pics too, Climbing Sron nan Eun looks a bit steep but wow, those views when you get there

Rockhopper, Thanks the bikes did make big differance and the views are really could. Wouldn't have liked to navigate round these 2 in bad weather.

Monty, your route is for the super human, how you manage it in the times amazes me. If i ever walk with you i think you should carry all the kit

Chris, The climb up Sron nan Eun is steep but worth it for the views. You can allways do the route in reverse and come down Sron nan Eun, personally i prefer to climb than descend steep ones.