On a day of constantly threatening cloud, a long route to one of the most memorable spots in the Brecon Beacons. There’s a classic route to the Carmarthen Fan (from the road-end to the north-west, steeply up and then along the full northern edge of the escarpment) – unfortunately, this wasn’t it...

our_route.gpx Open full screen  NB: Walkhighlands is not responsible for the accuracy of gpx files in users posts
After a steep pull up a decent path from Glyntawe to the ridge, the route up to and along the cliff of Fan Hir is easy enough going but long and quite featureless on the ground, although the views are good to the high central Beacons and the Black Mountains beyond. 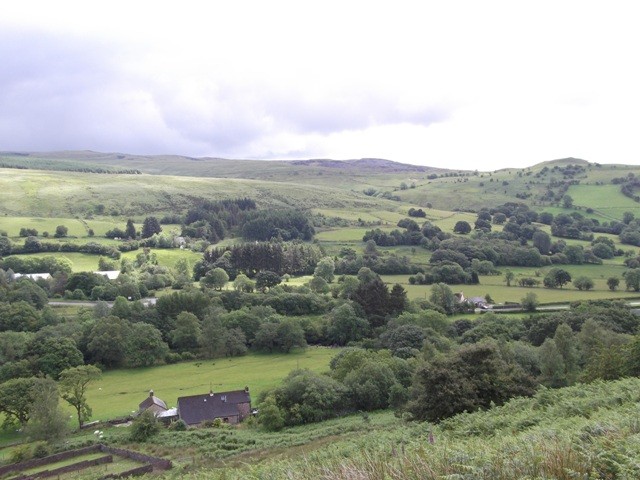 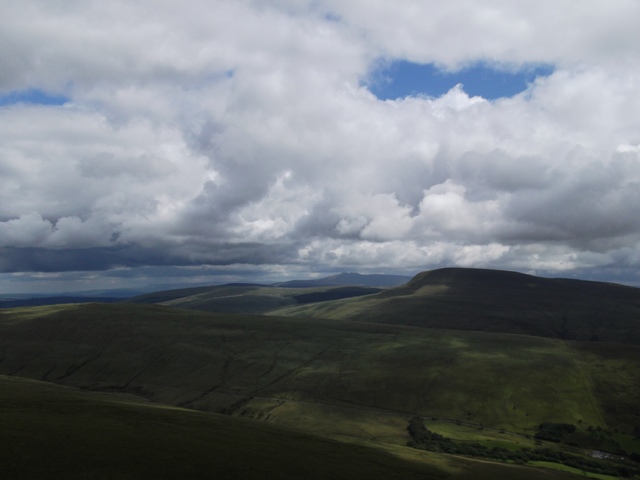 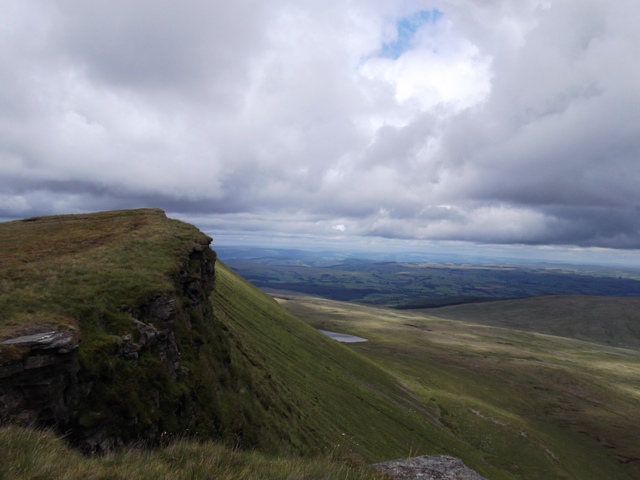 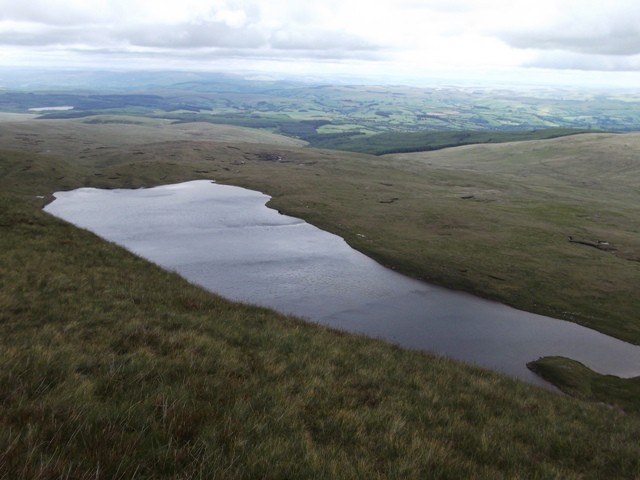 The walking improves after Fan Hir though, down and up again to Fan Brycheiniog above the handsome Llyn y Fan Fawr. It’s worth continuing from there to the second top of this mountain, both for the different views back along the ridge and to find the better going when cutting across to the west of the plateau to descend towards Picws Du. 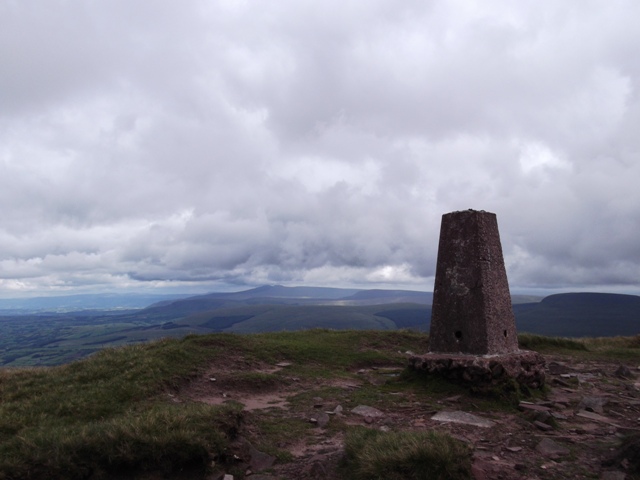 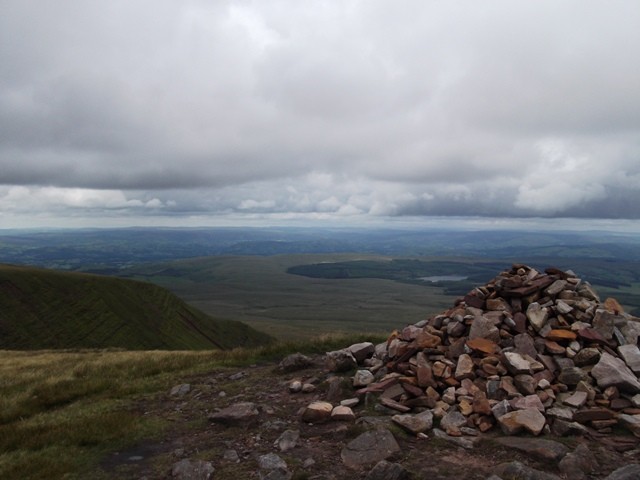 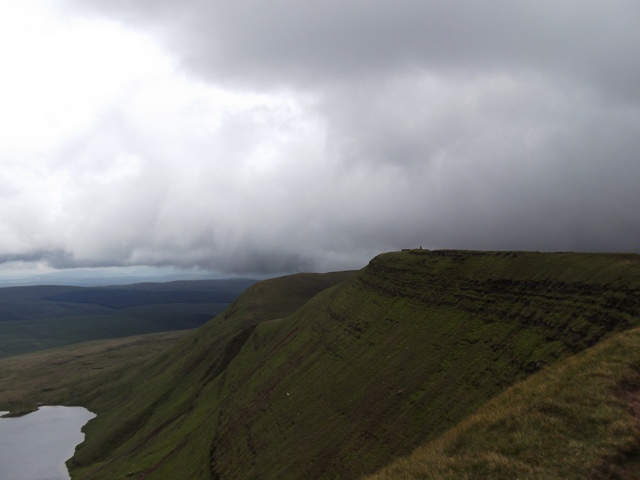 From there, and after a slightly slippery first descent, the undulating stroll over the spectacular green cliffs of the Carmarthen Fan is among the best couple of miles of hill walking around – the view of the hills encircling Llyn y Fan Fach is tremendous. 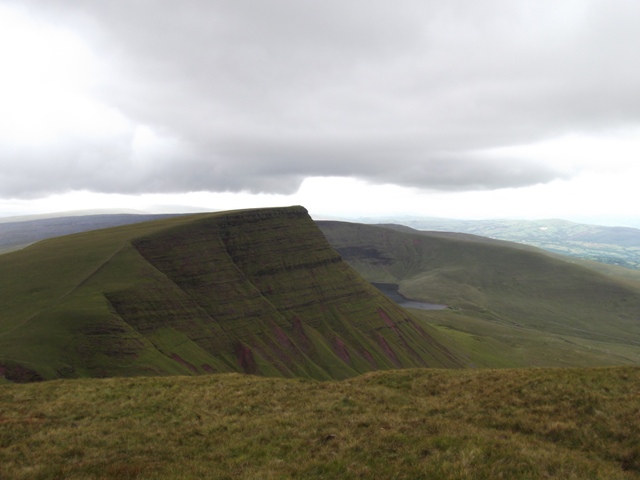 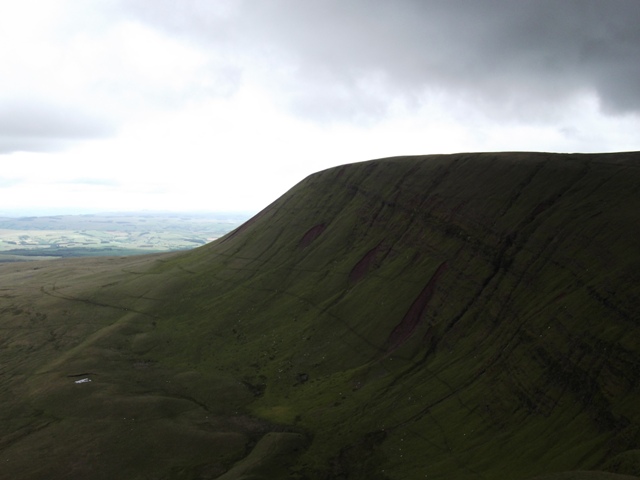 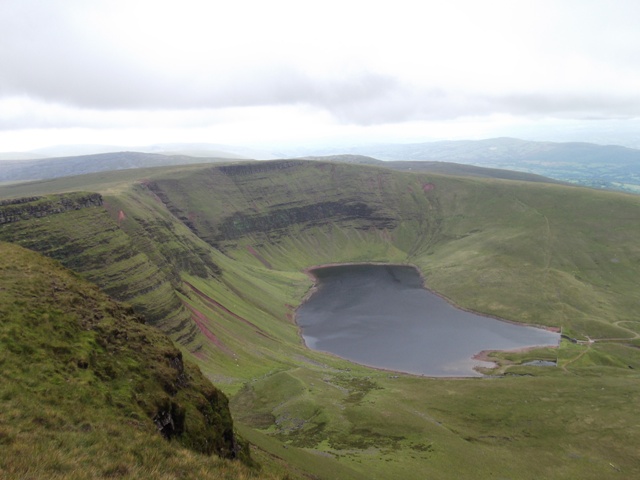 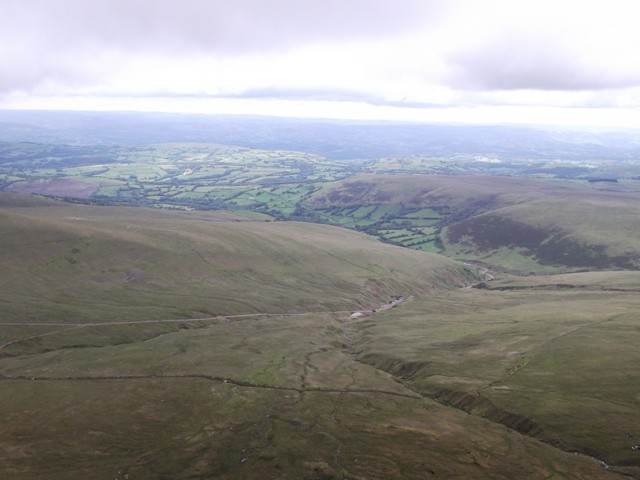 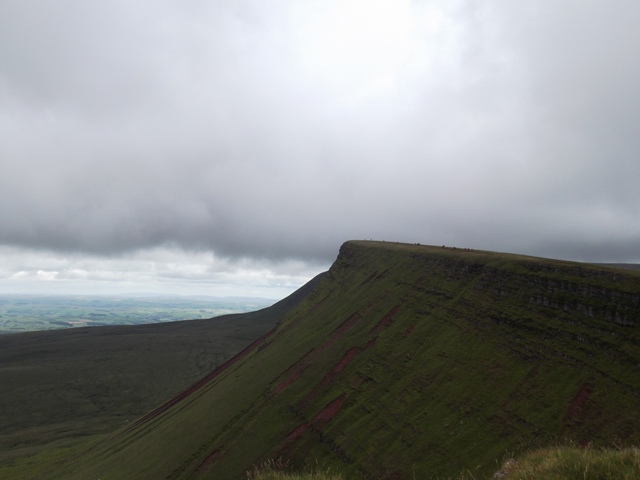 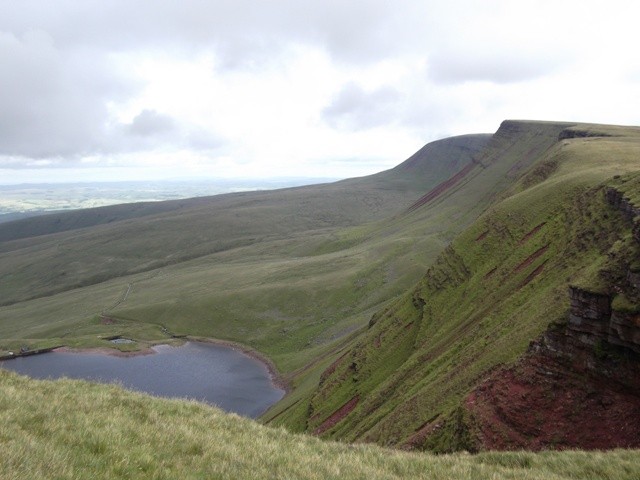 Experience says that the best way to continue is to drop down for the view of the cliffs from the lake shores, but – on a ‘bagging’ day – it was time to leave the escarpment for a slightly marshy tramp over to Garreg Las. Once past the wet col, it’s a pleasant climb up through the ‘blue’ rocks to this quite bouldery peak, but still rather a comedown... 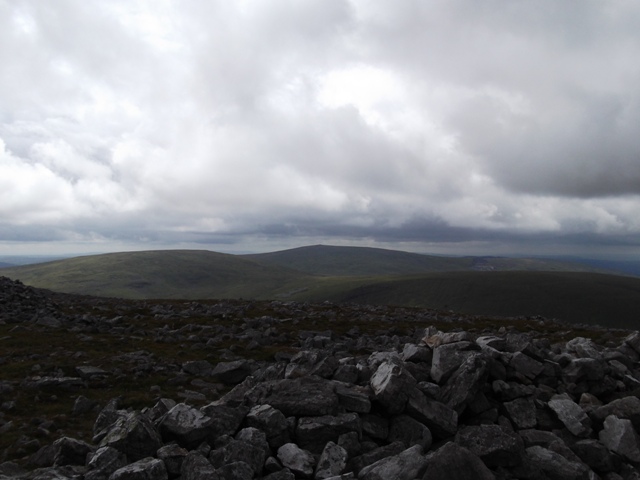 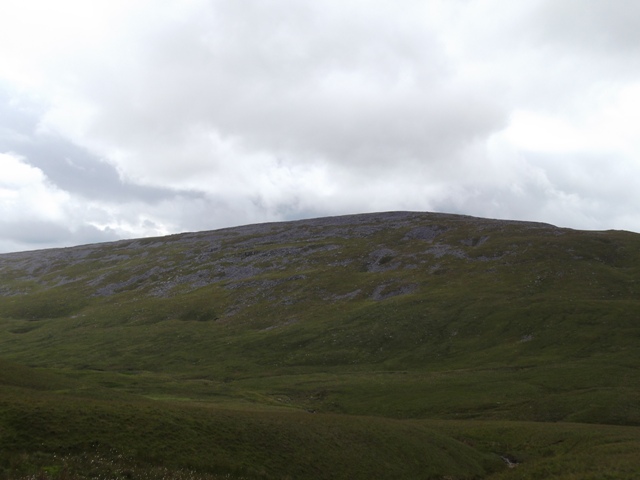 From Garreg Las, looking over a long bleak green moor, the thought of another six miles back to the starting point does rather make the heart sink... It would be nice to say that this was a pleasant surprise, but in truth – and especially for the first half – it’s a grim slog. There are few features about to guide you and what paths there are tend to drift off in the wrong directions (the right direction tends to be through the reedy waters you’d rather avoid...), so you are constantly checking the map and compass. The rivers you have to ford were also – this day at least – fast flowing and lacking in obvious crossing points; it’s either long detours or deep and difficult wading... The route does improve eventually – head just left of the stony grey peak of Disgwylfa to pick up a passable track that heads back to Glyntawe over more pleasant terrain. 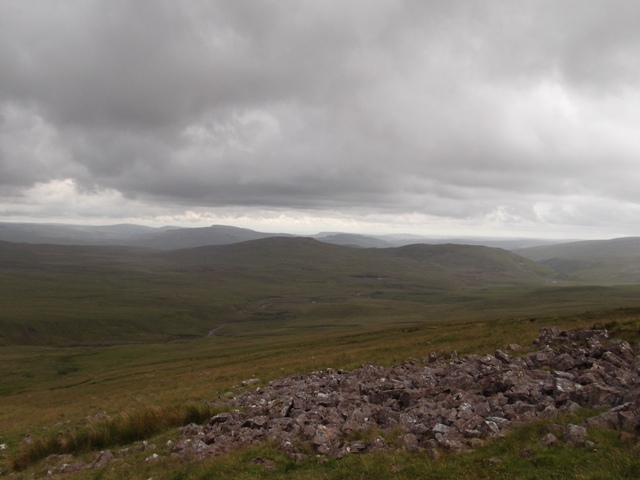 Start of return route from slopes of Garreg Las 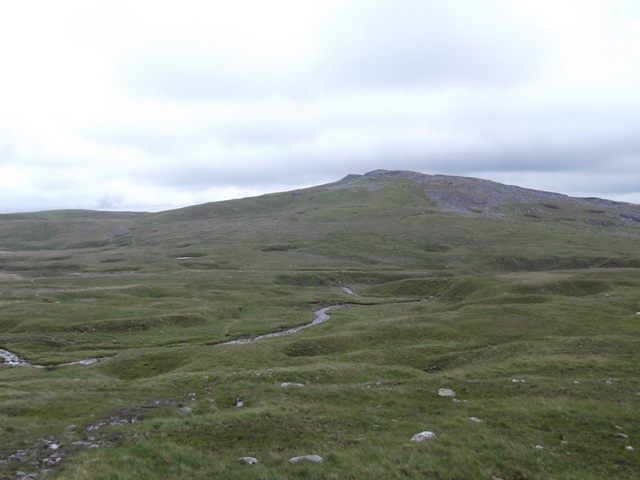 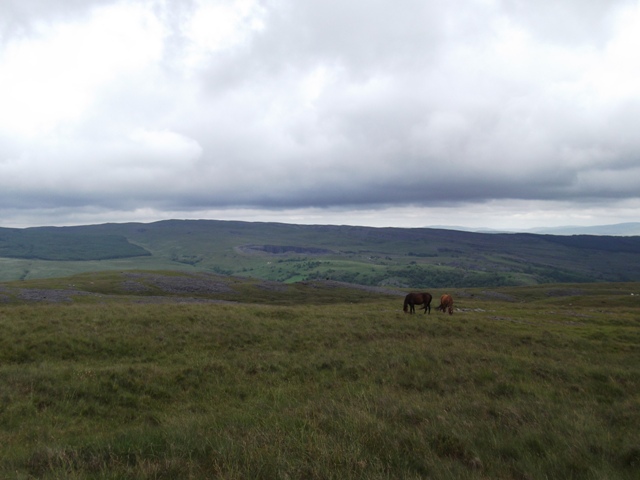 I still wouldn’t hesitate to recommend Picws Du to anyone, just perhaps not this way... Take the short easy route from the north-west and just go there-and-back to any other peaks you want to take in (with Fan Brycheiniog the most worthwhile extension).

Nice report, poppiesrara. The weather looks pretty ominous on some of those photos - like it's about to lash it down any minute! It does look a nice area though - despite the part you described as a 'grim slog'

With sections like that I think it depends what mood you're in. I don't mind them too much if I'm feeling fit and the weather's OK, otherwise it's just a case of head-down and keep going.

P.S. I'm hoping you'll be doing Rhobell Fawr and Dduallt soon so I can find out whether it's possible to get from one summit to the other by cutting through the intervening woodland, thus cutting-out a long walk round the north end or the south end of said woodland - well, there's no harm in finding these things out from someone else

It'll be a long while before I get round to those two, but as you're aiming for the Welsh Hewitts this year anyway, and as your reports are proving very helpful, I thought I'd put my order in

Thanks, Red Peak - it's a really lovely area, but I don't know if this was quite the day (it never did rain properly, but it always looked imminent...) or the route to see it at its very best.

As for Rhobell Fawr & Dduallt, no problem, it'll be on the menu pretty soon! But waiting for a dry week or so first - quite wary of Arenig bogs now, and those two are meant to feature some bad examples... There are enough routes described featuring exactly the same zigzag route through the forest that I think it must be passable, even if only made so by enough people trying it first. Not yet sure whether to take the northern (tricky river ford, pathless, worse bogs...) or southern (there-&-backs, long forest roads, thrash through the forest gap twice...) approach? - I'm hardly selling this one to either of us!! The Beacons first, perhaps?

I'd assumed the approach from the south would be the best bet, but neither sounds overly-tempting. I might try and get down to the Brecon Beacons and see a bit of that part of the world before doing the more boggy peaks in North Wales. Whichever way you decide to do Rhobell Fawr and Dduallt though, good luck - and I look forward to your trip report

That's a good walk you did. I have done Fan Brycheiniog many times but did it from the north for the first time today, following the course of the Usk for a while and then heading accross country to climb it's northern spur.