Having climbed Morusig and Sgurr nan Ceannaichean a couple of years ago and impressed with the Glens below, and seeing a couple of walkers climb up the ridge of this hill I thought that I would pay it a visit.

My mate and I drove down and when we got to Achnasheen it started pouring down and our plan for a cycle in and an over night camp dwindled and by the time we got to Craig. However, several walkers were heading off both on foot and cycling so we thought that we would just leave the bikes and walk in anyway and see if the weather improved. As we headed up towards Glenuig lodge several walkers were returning as conditions worsened. By the time we got to the lodge we sheltered in a small shelter which says "walkers welcome", we had a brew and I convinced my mate that we should go for it as the cloud base was pretty much staying just on the tops. So after lunch and plenty of tea we decided to travel light, leave the rucksacks with tents etc in the shelter and hoped that they would still be there when we returned.

So, just a few hundred yards down the track from the lodge we headed over the boggy moorland and soon enough we had a river crossing, and then another, before ascending up the steep slopes of Carn nam Fiaclan. This is a fair ols slog but I knew once this was dealt with it was pretty much level round to the summit of Maoile Lunndaidh. It was 5pm when we reached the top of Carn nam Fiaclan and took shelter out of the wind. The drizzle had stopped and the clouds were just above most Munros so it was an easy stroll round to the summit. Here the mist came and went every few minutes..which made the views all the more dramatic. Descending down through Fuar-tholl Mor and back towards the river crossing where the waterfall is( as in picture). Earlier in the day we had met a couple of walkers who had came in the day before and said that the rivers were low..and were surprised at just how ferocious they had become in 24hrs. So much so that at Pollan Buidhe, they said that there were a few tents and mountainbikes just about being swamped by the overflowing river.

A uneventful walk back to the lodge and my mate and I decided that the shelter with two bunkbeds was a more comfortable option than trying to set up the tents with the midges out for fun!! ( 9pm). So as it was the shelter was warm..light and a heater so with a few beers I was in good fettle! Watching the setting sun in this scenic glen was most memorable and I cant wait til my next overnighter!

In the morning about 7am..a bull decided to scratch himself against the shelter and I tell you at one point I thought he meant business cos he was rocking the shelter back and forth. I opened the window and told him politely to find himself somewhere else to scratch himself, which surrisingly he did. There were people staying in the lodge with children who didn't mind us being there. The walk out in perfect blue skies and eventually we got great views towards Coire Lair..which we didn't see the day before due to the drizzle. 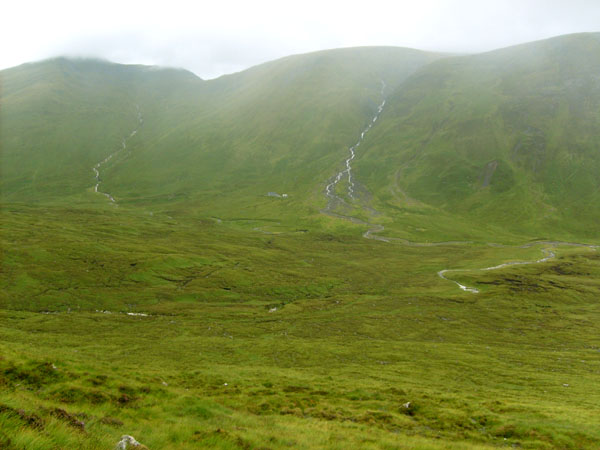 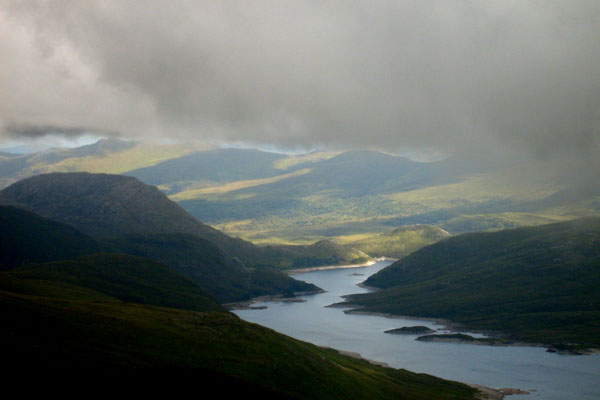 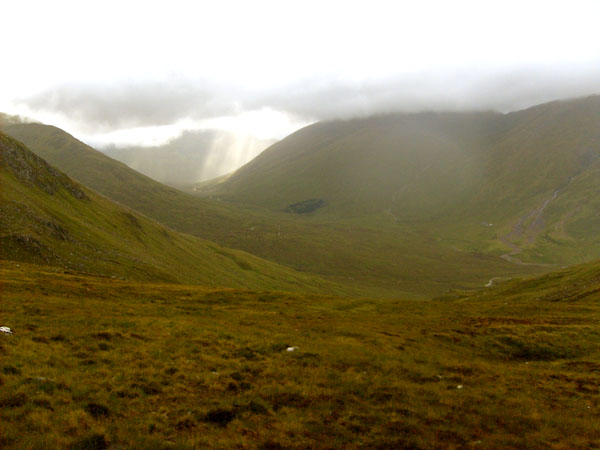 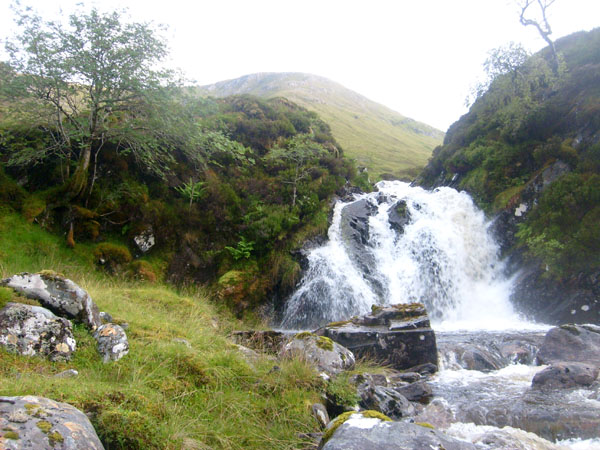 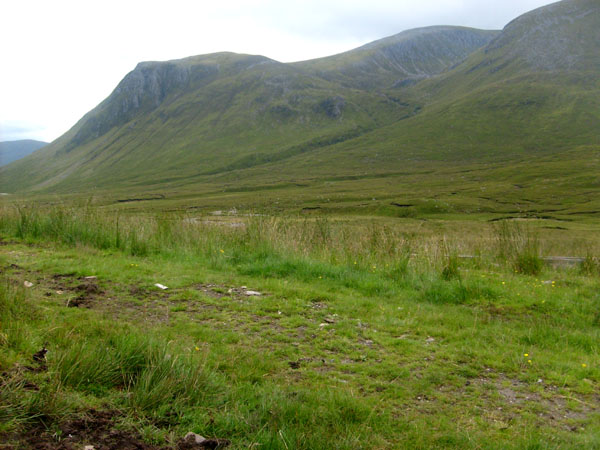 Nice report. The weather has been a bit of a washout lately and has put me off walking at the moment. Ok I know I am a chicken. Well done in continuing on your walk in the conditions. If the weather continues as it is I will need to set of in my wet suit

Monty, ye can just canoe to the top!

HI Kev, I'll sit in the canoe and tie the tow rope to you and you can puill me up hahahaha

My memory of that hill was a steep hard relentless slog up the way onto a huge plateau.

The shelter is a cracker and fortunately there were no cattle when we were there. I also remember that there was an old digger about half way up the track, and if we could have started it, we'd have been going down the glen in that