Not that I have ever ventured much north (perhaps 1 trip to Inverness, 1 to Aviemore and 1 to Netownmore) I have never witnessed the mass bulk of the CG's, amassed with cloud on all occasions, apart from when visible on my other jaunts up the hills.

As part of personal goal to get the Top 10 done by the end of the year I had to venture here sooner or later, and the weather forecast had a mix of what to expect we decided to make the commitment and go for it.

Leaving the house at 6:45 we made the trip up the A9, which made a pleasant surprise as all other hill expeditions have taken us on other routes (it was our 1st time up the A9 this year!

)
We pulled up into the Cairn Gorm ski centre car park at 9-ish, and were promptly suited and booted and on our merry way.

Walking between the cafe and the rail station, we made our way up the path and at the split we continued on the main bulk of the path in a direct attack on the hillside; the sun beating down it made for a tough start. On this path there are brown wooden posts at intervals with various bits of information on them which were quite good, but disregard the numerical value on them, at first I thought this was height but in relation to the GPS it didn't match up and was considerably out; which was right, who knows?

This path drifts away from the rail line and up a short steep section before almost doubling back on yourself which leads to the final push up to the restaurant. A quick sit down outside the restaurant for a wee drink and then it was up the path to the summit. Some might say the path is a good idea, but I found it dictated your walking and broke your stride. However, soon the summit trig point was in sight. 1 hr 50 min, number 6 - Cairn Gorm was summitted! 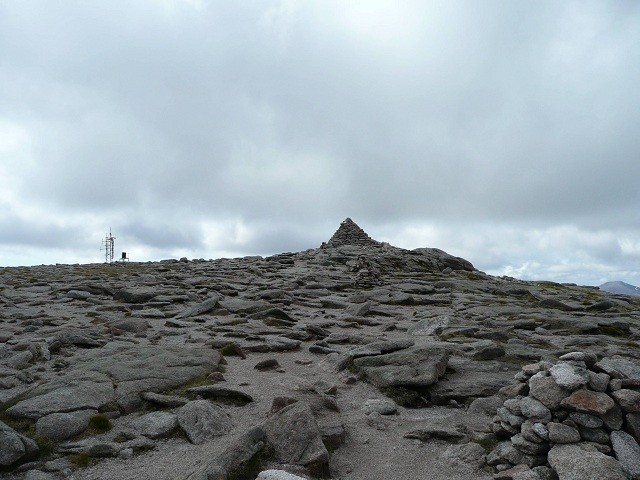 A couple of quick pictures and then we made our way to the south side of the weather station to re-fuel. The views opened up and were almost awe-inspiring. They were certainly stunning, in my opinion.
The views over the Northern Corries, and across to Braeriach with Sgór an Lochain Uaine and Cairn Toul hidden by the mass of Ben Macdui. Following the ill-defined track we walked close to the edge of the Northern Corries, over Stob Coire an t-Sneachda and onto the well defined track which led us south of Cairn Lochan. The track is of good condition and the distance covered was done at speed, thankfully, as from Cairn Gorm, Ben Macdui looked an unachievable distance away. Skirting west of Lochan Buidhe the path became a little undefined again as the terrain turned more rocky, before joining the track heading south from Miadan Creag an Leth-choin, which made for easier walking again. A slight change in incline occurs as the final push to Macdui draws closer. Following a good rest and re-fuel the obligatory photos of the surrounding were taken, although I didn't venture far from our rest stop (wish I'd moved closer to the edge of the western drop).

As we started our return we noticed the darkening of the clouds to our west on which we would keep a keen eye on. Hidden by the bulk of Braeriach were the walls of falling rain which soon flanked the neighbouring summits and were heading towards us. A quick decision to stop and waterproof-up was a good call as within seconds the rain was on us and was quite substantial. This made walking over the rocky outcrop a little precarious but on we went. Visibility wasn't really impaired as we could still see the track south of Cairn Lochan to which we were soon on and the pace increased again. It wasn’t until we neared re-ascending Stob Coire an t-Sneachda that the cloud closed in on us, reducing visibility to 30ft or so, navigating our way round the edge of the corrie. Then there was a sound, which to me, sounded like a car engine - but then i was about 50ft away from the corrie edge and it was muffled to me. A car engine wasnt an unfeasable option, we'd seen the bottom of the corrie earlier and I'm sure you could have got a 4x4 in there. But the sound got louder and as I neared the edge, closer to the father-in-law, I suggested "helicopter?".

The sound was now roaring as it neared; was the pilot aware on how close to the mountain he was? Should we get away from the edge? Was he gonna come close over the corrie edge? Was he gonna smash into the mountain wall?
All these thoughts running through my head but we stuck it out, peering precariously over the edge to which all of a sudden became a break in the cloud, the 'copter must have only been a couple of hundred feet below us and 50ft or so from the corrie wall as he banked sharply. As quick as it had gone the cloud shrouded our view again.
It cleared just enough for us to see the Sea King land in the corrie before shielding it from view again, the rotors died down for maybe 5 mins before they roared up again and the cloud thinned to allow us to see it fly off north. A bit of added excitement to the day! The cloud remained thin as we continued along the track as we checked the map to see what the descent into Coire Cas was like: really didn't fancy going back up Cairn Gorm. Decision made - Coire Cas!

Just as we passed the last cairn the cloud drew in again smothering our view, but gently picking our way down the track you come across a neat staircase made of selected giant stone, drifting off the east side of Fiacaill a' Choire Chais and before long we broke free of the cloud and the remainder of the path to the ski centre was visible: maintain on this track the full distance to rejoin the path we took up. With rain now easing we covered the last part of the trip in no time at all and got back to the car at 16:45, with enough time to use the toilets and the sinks for a quick wash.

dirty things, there was me thinking my 1st would be special!

Great day out even with the weather, and a great way to let the reality of the other 3 sink in!

Good report Driver84,
Some excellent pictures. Its a good walk

Excellent report - looks like you had a pretty good day for the most part.

Stood at the top of Cairn Gorm looking over to Macdui, it seemed a hundred miles away, but the track between them was great and really broke down the journey.

And with regards to the weather, even if it was torential for the last hour and a half, I cant complain really.
Although I've not done a lot of walks, I think I've done well to go nearly 2 years and not be rained on.