The hills in this area north of Ullapool are just amazing and from most of the summits you get wonderful views of the lochan clad moorland that makes up the North West Highlands.

Driving up the night before so that I could get an early morning walk and the sunset over Cul Mor captivated me for well over an hour with the sky just getting redder by the minute casting an intense glow over the area. View to Cul Mor at 7am

Parking up at Knockan Crag, I set off at 7am and was immediatedly rewarded with a Golden Eagle sitting on a rock about 50yards away. On this walk I had decided to carry and old but heavy video camera with me and I immediately began filming but 30 seconds in and low battery light flashing even though I had charged it up for 24hours the day before.HuH! Still managed to get some photographs though and for the first half hour of the walk A pair of Eagles soared over and around me and I must admit this made the walk. The path is easily followed right the way up to the first plataeu where the views open out and Suilven,Canisp and Ben More/Conival make an appearance. 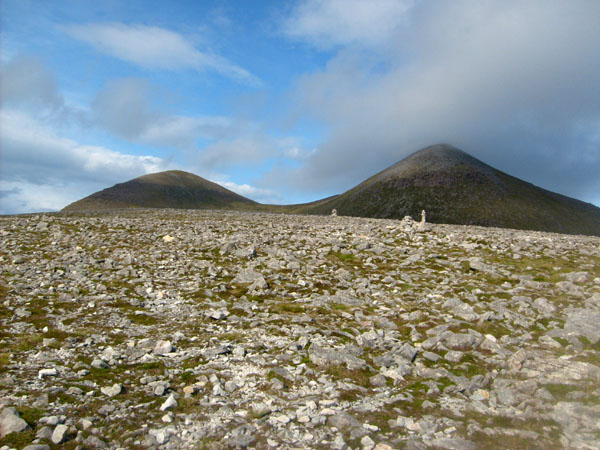 From here the route up to the col between the two peaks basically follows the small burn that runs down the middle. The route to the col following the burn

This is a gradual climb rewarded with great views to the south of Knockan Crag and beyond on the horizon, Seana Bhraigh.
Reaching the col a strong wind picked up and was threatening to blow me off my feet so with a quick ascent up onto the western top ( 9.30am ) and mist was blowing in obscuring the view one minute and clearing the next. Away down back at Knockan Crag the car park was filling up quickly and it looked like it was going to be a busy day on the hills. 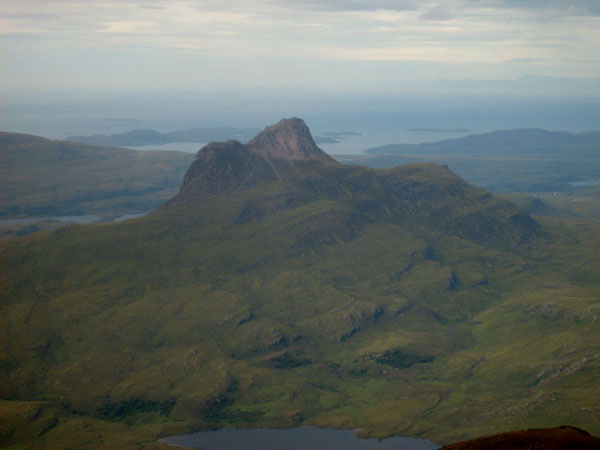 view to Cul Beag and Coigach

Taking in the views to Stac Polly, Cul Beag and Coigach I descended to head over to the trig summit. The wind was still blowing a gale and meeting a walker here we had to shout at each other to have a conversation. From the col it is a short climb up to the summit and views to Suilven, Quinag and Canisp held my attention. I like to spend a while on the summits of hills and today I stayed here for an hour and a half watching the pair of Golden Eagles and chatting with walkers as they came onto the summit every 15minutes or so before continuing their journeys before the weather turned which it was threatening to do. view to Suilven and Canisp Descending slowly down the NE end from the summit down to a small lochan and from here it was a case of heading back to the plateau where there are two small standing stones and then following the path all the way back to Knockan Crag. I think I'll return to climb this hill when it's snow capped as I had done on Stac Polly.

Enjoyed reading your report and seeing the pics. Have been holidaying in Ullapool and Ardmair since the mid 60s and never tire of the views - the Coigach hills are often overlooked in favour of their loftier neighbours - they are great walks. Not the best view of Cul Mor - but from Loch Veyatie a couple of weeks ago. Another with great views: Sgurr an Fhidhleir. A view from the top [of Sgurr an Fhidhleir] towards Stac Pollaidh, Suilven and Quinag - from August 73. A bit faded as taken from an old slide. Hope you enjoy them

Hi NevJB,
Thanks for the pics....I never tire of visiting and walking in this area and as such been up Stac Polly 5 times, Suilven, Canisp, Cul Mor. Planning on doing Coigach shortly and Suilven again. Like you say this whole area is majestic and every hill is worthy of climbing regardless of status.Luckily I can be on these hills within and hour and a half so quite often shoot over for an evening walk/ painting trip on Stac Polly. Had a great winter walk here last year..look out for walk report shortly...and trying to convince my mate who's solely a "munro bagger" that he doesn't know what he's missing!!

Super report showing a grand part of the country.

I was up there must be about 8 years ago, stayed in a cottage on the coast just south of Achiltibuie looking out over the Summer Isles. We could lie in bed and watch the Stornoway Ferry. The kids were a bit young so we only climbed Stac Polly and Ben More Coigach but we drove all around the area in a mild October and it was stunning.

But the main thing that reminded me of our trip was your photos of Cul Mor, I remember driving past and commenting to my wife that it looked like a woman's chest when she's lying down

, your 3rd photo shows this particularly well. So you could say that you breasted Cul Mor!

yokehead wrote: So you could say that you breasted Cul Mor!

Ha!...in that case I'll have to return again just so that I can have the pleasure all over again. I done this for my 40th Birthday ( 16th Aug) last year and my wife said." what do you want to do for your 40th?..go out for dinner? Go to the pictures? Have a party?"...No honey...I'm going walking..that suits me just fine! Easily pleased me!!