20110702-both.gpx Open full screen  NB: Walkhighlands is not responsible for the accuracy of gpx files in users posts

I'd hoped to do a solstice walk but the weather over those few days was dire so delayed till the weather improved. I'd noted from The Photograhers Ephemeris that the Lochnagar corrie gets the morning sun during mid-summer. Although I've done Lochnagar 3 times already I hadn't made it up Meikle Pap yet and have yet to get a good photo of these magnificent cliffs. My plan was to be up Meikle Pap an hour before sunrise - and sunrise was at 4:24!

So with the Loch Muick car park being only an hours drive away I stayed up (apart from an half hour's snooze on the sofa) and left home at half past mid-night. After a cautious drive up (high deer risk time & location) arrived at the car park to find a few cars there. There was even people getting ready activity in one. I was on my way by 1:30. Despite there being no moon I only needed my head torch for the brief stretch through the woods on the other side of the glen.

Got to the top of Meikle Pap at 3:05 and the conditions were near perfect. There was absolutely no wind, a bit of mist down in Deeside, some high cloud to the north and some low cloud on the eastern horizon. Had some hot chocolate and then set up the tripod and started shooting & waiting & drinking in the views. It was lovely to watch the morning develop. Around 4:00 the peace was disturbed for half an hour by the clucking of grouse and the croaking of ptarmigan. Best of all I watched a cloud inversion form before my eyes.

Waiting For The Light 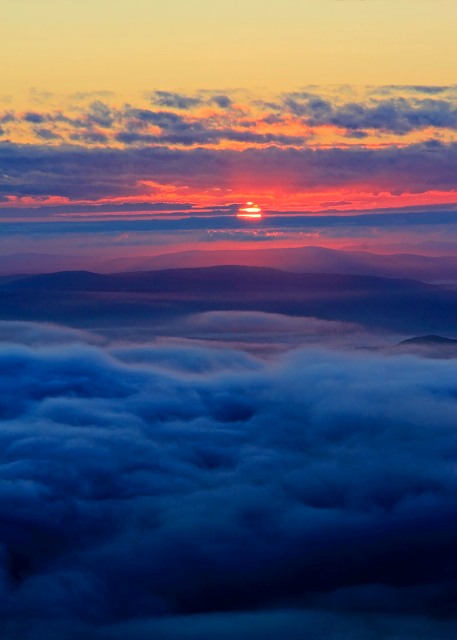 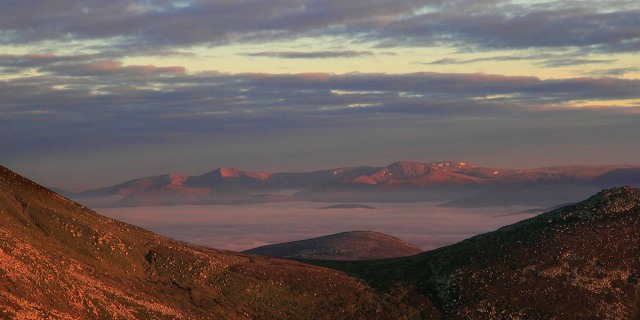 After over 2 hours on the Pap I made by way slowly over to Lochnagar. This was the first time I've been up here when there hasn't been snow about so I stuck to the corrie rim, stopping for frequently for more piccies. Got to the day's highest point at 6:50. Time for the rest of my hot chocolate and my marmalade sandwiches. Spent another 50 minutes doing exactly what I'd done on Meikle Pap - fabulous. Even did a bit of civic tidying (fag ends, dead tissues, sweetie wrappers & one nearly full pouch of rolling baccy!) using my empty breakfast box as a bin. Of the four occasions I've been up here this was the third time I had the place to myself. But this was by far the best as I had so much time to just sit about and watch the clouds. And for the first time from up there I could even see the sun glinting off the sea to the east. 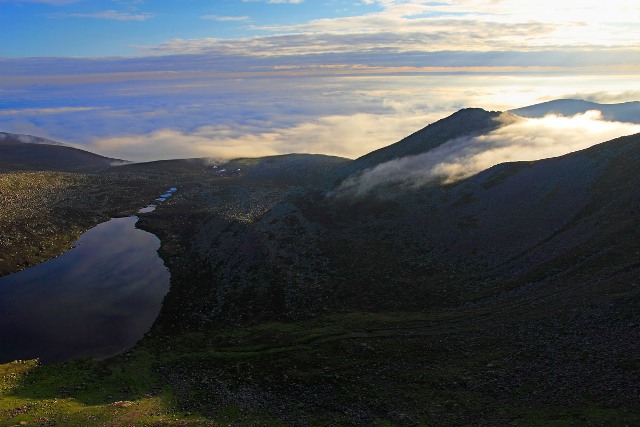 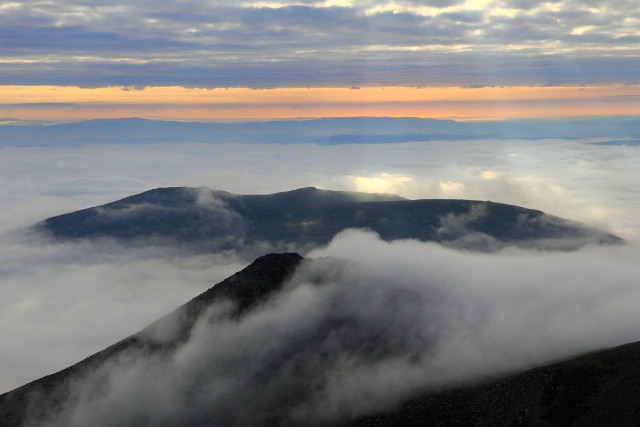 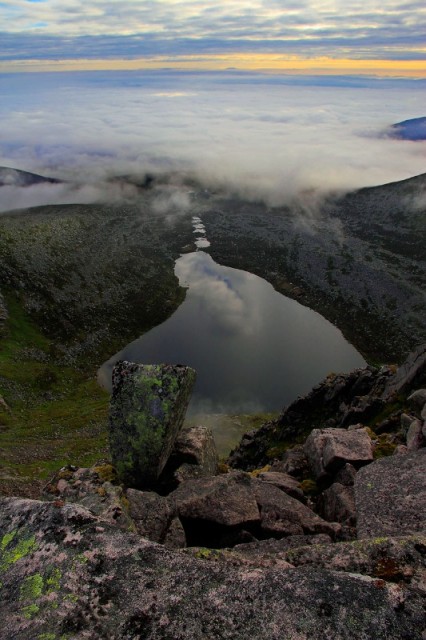 By 7:45 the corrie was nearly entirely filled with cloud so it was time to head back. The timing couldn't have been better as coming off the summit mount I spotted the first other person of the day just making his way past Cac Carn Mor. Pasted a steady stream of walking coming the other way all the way back to the car park, which I got to by 10:05. Back home for elevenses

An hour's snooze in the afternoon, an early night and the effects of my all nighter were gone. I also took a long (3 & half minute) HD video from the summit of Lochnagar but at 1.1 GB I'm having trouble uploading it to YouTube. Tried a couple of times but it just grinds to a snails pace around 40% in (& I'm using their advanced uploader). I suspect its my ISP throttling my connection thinking its file sharing. Can anyone recommend a decent free movie editor? It has to be able to handle HD .MOV files and be able to reduce the resolution. I've tried the Window's Movie Maker but it doesn't handle .MOV files (typical Microsoft!).

Edit: now sorted out the vid. This is a long one (nearly 4 min) taken from the summit of Lochnagar at around 7:30 am. It consists of a slow 360° pan & the 2 minutes of nothing much but very slowing drifting cloud. I suggest you mute the sound, choose a HD resolution, full screen it and listen to Song To The Siren by This Mortal Coil instead

& thanks to Stewart for the free Any Video Converter link.

some cracking photos there Alastair, well done - now I can see what I missed recently !

Stunning set of pics there Alastair

Nothing I can really add to the above comments!

An amazing set of pictures once again Alastair.

OMG!!! what a stunning set of pictures! i could only dream of getting pictures of that quality!

have the first two been 'touched' up in any way? the colours are beautiful!

Thanks all - it was a pretty special morning

iainwatson wrote:have the first two been 'touched' up in any way? the colours are beautiful!

They have all been tarted up to some extent. The first two (& a few others) needed sky/foreground balancing so the fore-ground wasn't too dark & the sky not blown out. I also bumped up the colour saturation (by about 10%) for those first two. Whereas for the Lochnagar Corrie one I only bumped up the sharpness - it really was that red.

I took over 200 exposures that day - a lot of them were the same thing with different exposures to get exposure spot on.
Last edited by Alastair S on Thu Jul 07, 2011 4:38 pm, edited 1 time in total.

FAntastic pictures m8, good on ya

I must write up my report as i did the Lochnagar 5 last year....Long Long walk for a semi fit bloke, but once again my photo's are no where near as good as yours Alastair..

photo's simply stunning whether they have been 'touched' or not... Amazing..

Lovely - what an excellent night and sunrise that looks.

There must be a few NE corries benefiting from the sun rising in the NE - a camp on Druim Fada above Kinloch Hourn springs to mind - the Coire Dhorcaill of Ladhar Bheinn must look spectacular at dawn.

A cracking set of pics there - enjoyed that.