5 months of living 20minutes away from Snowdon and with a lot of the surrounding peaks ticked it was time for me to do Snowdon and it's 10-odd tops but the wife wanted to come along for the first one so once again I poped the baby on my back and we headed up the tourist route for an easy day out.

we headed up the PYG track and made sure not to make a right at the turn off for the Crib goch. The start of the Pyg track The reason why it has taken 5 months to Climb snowdon is I have been waiting for a Clear but cool day.
Apparently April and may weren't dry enough for me so I found a clear and cool day on Thursday so we decided to do it.
The cloud was about and as we climbed and reached the junction for Crib Goch ( I say junction becasue the path is like a motorway) we got our first views of Llyn Llydaw and Y Lliwedd. 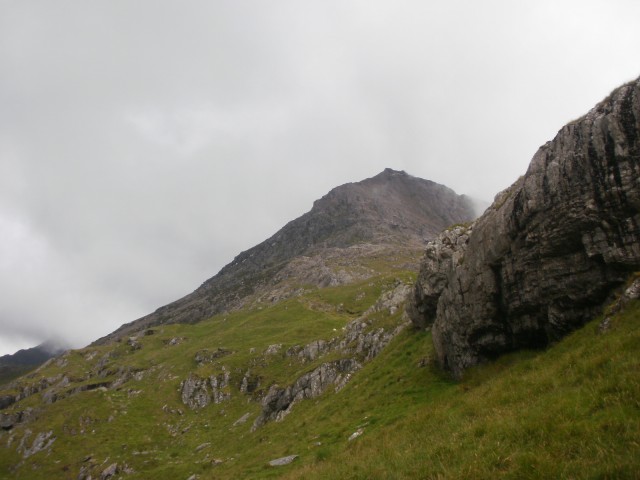 as we got onto the new section of the path it kinda levelled out and nicely contoured around the Crib Goch eventually leading us to the bottom of the saddle.
the walk was nice and the views on this section of Y Lliwedd, the Miners track, and Llyn Llydaw were lovely. 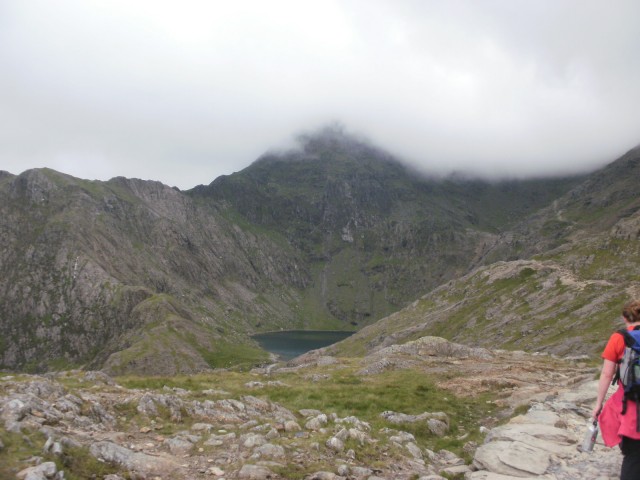 The Pyg track heading to the saddle Crib Goch summit behind us now. The Snowdon Train from Llanberis no more pic were taken until we reached the top and got into the Cafe!!!! a state of the art full blown cafe!!! realy bizarre thing to see so high up.
and the funny thing is half of the Cafe was with high tables for standing and the other half was picnic style tables, al the people that came up on the train used al the picnic style tables and everyone else who walked up had to stand!!! My Daughter and I in the Cafe Beth and Kate at trig point

we spent and hour in the Cafe eating our Packed lunches and snarling at train passengers, bought some souvenirs at the shop and headed down.
once back down to the Saddle (@1000m) the cloud was lifting and the Crib Goch could be seen and Llyn Llydaw came back into view.
The wife suggested that we head back up to take in the views from the summit but I declined and we continued to head down to the Miners track. The original plan was to leave the wife and Daughter on the top and I was gonna got and tick Y Lliwedd and Crib y Drisgol but the cloud and crowds really put me off and I just wanted to get home!!! Cloud lifting off of Crib goch and its ridge 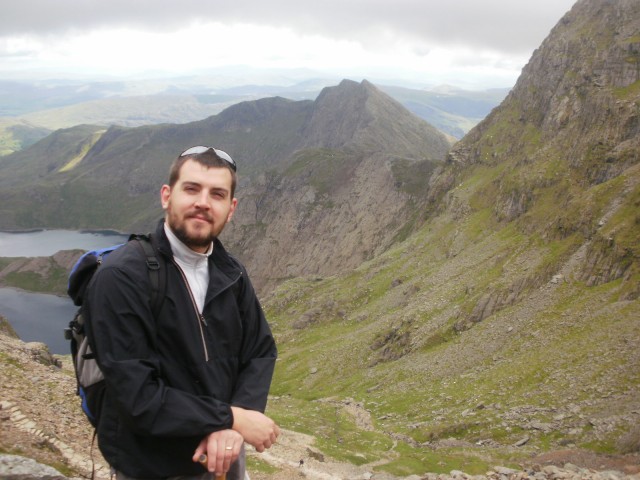 as we got further and further down the Cloud has completely off Snowdon and when we reached Glaglyn we got some lovely views of the whole of the mountain. after reaching Glaslyn we could hear a chopper but it wasn't the normal annoying snowdon tours chopper it was a proper RAF chopper as we watched as it lowered a mountain rescuer down into the Grib goch, then circled and then dropped a stretcher then circled again and collected some rucksacks, the stretcher and the mountain rescuer off of Crib goch. 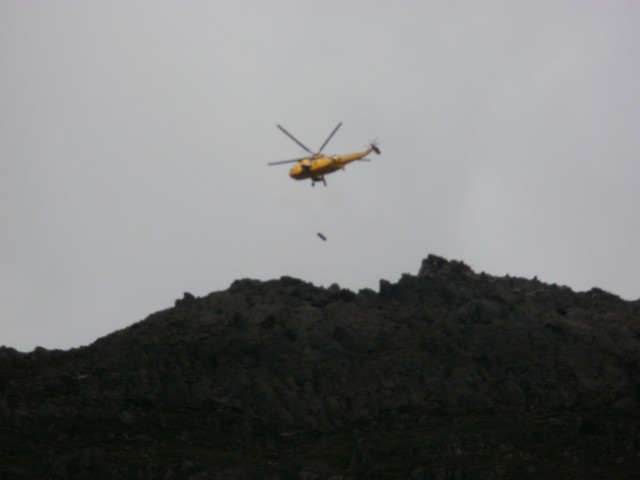 The rest of the walk out was on a lovely road section along Llyn Llydaw looking at Moel Siabod and the Glyders.
it seems we were to early and should have had a long lie to get the views from the summit but it was good re-con for many future walks up the Wonderful mountain. Kate with her new Button!!

Great report on a great hill. That money post must be quite new as I've never seen it. Did you hear any more about the Crib Goch rescue?

Did the Snowdon Horseshoe a couple of years ago.
http://www.walkhighlands.co.uk/Forum/viewtopic.php?f=16&t=1657
I described Snowdon as a G.U.S.O. (Get Up Sod Off) summit. The loos are an advantage though. There's quite a few in the Lakes like it. If I ever do Scafell Pike I only spend a few minutes there before heading for the peace and quiet of Lingmell.

I went up the same route a few weeks ago on a glorious day and your pictures brought back great memories.

Crib Goch is the scariest thing I've seen close up. But something inside me was telling me I have to go there some day

Great report, little one on trig is great pic