One experienced hillwalker, one intermediate, two children (slight 12 and robust 13), and an oldish dog for company... We travelled relatively light given the fantastic forcasts, carrying softshells, hats, buffs and gloves as well as survival kit, lunch and snacks. I carried 20mtr of rope just in case, but would not normally have needed it, and no shelter bivvy or outer waterproofs required... making for a lighter load! We carried 2*2 ltr bladders, and about 3 ltr of assorted drinks - but 7 ltr was NOT SUFFICIENT in the conditions we experienced - we were dry for almost a third of the walk.

We did the same route as that described on this site, but parked at the lower car park rather than the upper - we'd rather escape than walk at the end of the day.

After camping overnight and getting a good breakfast we walked up the road to the top car park, and on through the gorge. It was already showing signs of the glorious day it turned out to be, and fuggies were stowed before we hit the gorge. There were a goodly number of tents at Steall meadows, and we were overtaken here by some twenty somethings with snow boards who were turning north after Steall. The wire bridge crossing was "fun" as our 12yr old daughter is small at 4ft10in - she couldn't reach the wires... I led, balancing slightly to the right so that she could follow holding my pack with one hand and hold the nearer wire with the other. Much "She's going to fall" type comments from the many awe-struck spectators, but I knew her balance is increadible, and it was easy. Wifie at 5 foot 2 inches could *just* reach the wires if I held them in...

The Steall waterfall while not in full spate, was FAR too slippery to cross safely, and after one slip and partial soaking getting half way accross we forded well downstream, then had to work back up to the cliff to avoid the very boggy ground. This I realised too late is the last water of the whole walk... The main ascent path is quite shear initially (all warm gear stowed away) with BIG landslip making for an exposed and nerve wracking move halfway up. The latter zigzags are just "there"... unseen from below, impressive from above, leading onto the shoulder (great views of the ring), then up to our first summit, An Gearanach. There we snacked, took pictures, applied suncreen, and were joined by a party we'd overtaken, and congratulated one of them on her first ever Monro...

The ridge walk on from here to Stob Coire a Chairn is quite committing with kids and an old dog, but never too airy, and lots of handholds - toward the end of the ridge we met a pair of older gentlemen who'd just turned back, feeling that at 76yrs it was too technical, and passed by a "local" going the other way with a puppy who showed our dog how it should be done - with panache!
The haul up to Stob Coire a Chairn is relatively simple, and the views were stunning in the sunshine, although the other three retreated into their softshells for lunch - and suddenly my pack was much lighter...

The continuation along the (much softer) ridge was made following the two older gentlemen who set a stunning pace, and then kindly demonstrated the Am Bodach route for us - straight up... Photos really don't do justice to this - it's a steep scramble up broken lumps of rock. The softshells were back in my pack, but the adults made heavy weather of the ascent, and I was delighted to finally summit with almost no warning. Here was where we ran out of fluids... Bad Planning. By now the dog had had enough - he was thirsty, paw sore (lots of sharp rock) and, pardon the pun, dog tired.

The descent was simple but steep(dog got some water in the bealloch) and we split into two pairs (unintentional) to traverse the Devil's ridge, after my daughter got a mild panic (only came on after I told her what it was called - D'oh), so I roped her up for the ridge which we took to the left rather than over the top.
As we came off the committing part of the traverse, and I was stowing the rope, we were overtaken, by an extraordinarily fit pair from Carlisle (I think) who had climbed up from the south, and would tick Sgorr a'Mhaim as their fifth of the day (3 of his party had bottled out after the second hill!). His walking partner seemed to like our somewhat slower pace and happily chatted to my daughter until halfway up the hill, possibly to catch a rest from his pace (which I would have had trouble mathcing on my own) before they accelerated off again. The final push to summit Sgorr a'Mhaim felt long, but simple, and as we walked out onto the flattish top and cairn, took some photos, and broke out the last snacks (chocolate and cereal bars) the dog collapsed, unmoving, for a rest, while we ate and chatted to the pair who had overtaken us and were finishing their supplies.

We set out together for the descent, and they chatted to us until halfway down (perhaps again taking a rest) when our pace dropped off after the scree, and they galloped ahead. This NNE descent path is not marked on my map, but is clear, simple and steep. Descending over the loose slithery scree was interesting (I'd *hate* to ascend this way), and the final drag down the heathery zigzags very long, and very wearing on the adults knees (Wifie always suffers extreme knee pain on the way down after big walks, and was half an hour behind daughter and I by the bottom). After coming off the slope it's a simple walk back the camper for tea and a shower, and the long drive home.

Dog didn't do *anything* for two days, and turned his nose up at walk offers - sadly his last big day on the hills I feel, although he's since proved that shorter days are possible without too much effort.

A medley of shots showing the meadows (first summit centre), our novel crossing of the wire bridge,
the impassible waterfall, and a view south from Am Bodach of the Glen Coe hills 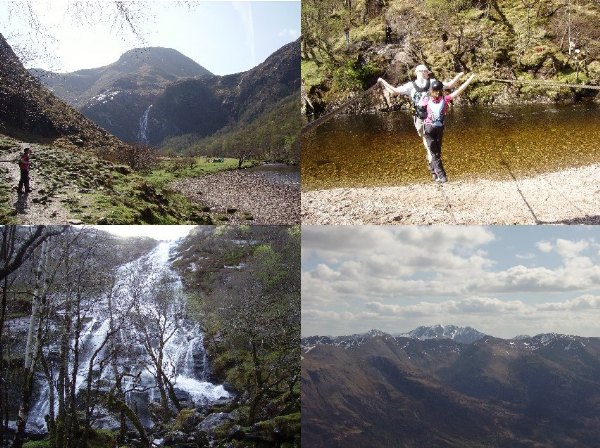 I'm not great with photo editing - but this stitched photo is five shots taken looking around the ring of Steall from the obvious shoulder of the first hill. Stopped JUST short of Ben Nevis... Photo point can be seen directly above the meadows and waterfall - about a third of the way up - in the shots above.

Enjoyed the pics - especially the bridge crossing which always scares me. It just seems a bit too high over the water.

If you want to know how to combine photos really neatly, try downloading
http://get.live.com/photogallery/overview
A good program (even if it is MS!), free, and lets you combine pictures - it matches them up, aligns them, fixes the exposures etc. all on its own and seems to work really well - as long as there's an overlap.

Myth - a very entertaining description of a great walk.

The wire bridge is certainly a challenge. I once arrived at night in February to stay in Steall Hut, and found one of the hand-cables missing. We couldn't work out a way of crossing and had to ford the (very full) stream further up. If the water surface is rippling, I find that it makes me dizzy to look at it - better to look straight ahead. You did well to get your whole entourage across!

I did the circuit anti-clockwise in February 1975, climbing Sgurr a Mhaim from Steall Hut by the NE ridge - a route which I would recommend anyone else to avoid! The winter circuit is terrific in good weather but is quite serious. I have not done the route in summer but it is probably quite serious then too - I think there was an unfortunate accident there earlier this year. I have some photos of another attempt in Feb 2005, but the system is rejecting them, so I'll have to doctor them & post later.

I've finally managed to get some photos sorted - I find this photo processing stuff rather challenging! these are from Feb 2005. It was a very windy day! 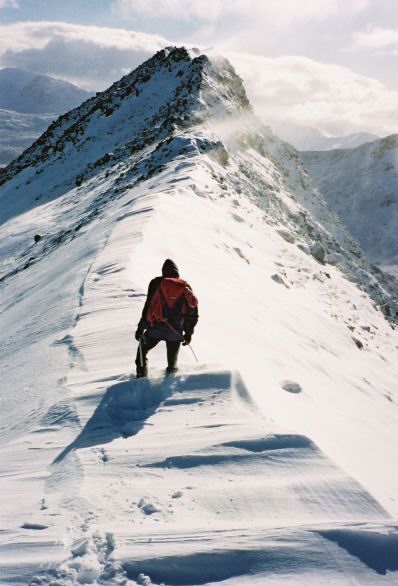 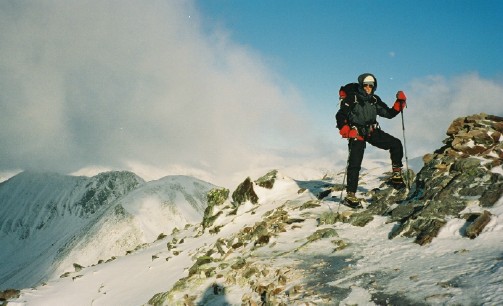 We didn't complete the circuit on this occasion so I guess I'll have to go back again.

Great photos - that route would be much too challenging for me in winter conditions.

Thanks for making the effort with resizing the pics - making them a size that fits on a screen it's a good thing for if you ever are emailing them too.

Great pictures there - particularly looking up An Gearanach.

I'd imagine in winter the route could be very challenging indeed - not one for the kids, yet. The final descent would be horrible with the big landslip there which has taken a bite out of the path...

I heard about the fatality on the Devils Ridge sometime after our trip - very sad, as he sounded experienced and prepared. I do recall there are some *very* committing moves even on the lower path.