I've been meaning to write up a quick report for this munro all summer as it was the first of hopefully many munros for me this year. Near the end of April I had finally finished the large amount of work required for my first year of PhD studies here in St. Andrews and I wanted to get back in the wild and away from this town and the books. I had previously climbed Ben Macdui and Cairn Gorm back in September 08 and was eager to get back to the Cairngorms. I took a small load of my tuition money to Tiso in Dundee and purchased a tent, sleeping bag, and some new clothes fit for the hills. I've camped across the southern states in the US but never in Scotland and with the access rights I thought this would be much funner than a bunkhouse or B&B.

I've been walking up through the Linn of Dee area once before and was fairly positive I could find a decent campsite not far from the car park. My gear is a bit too heavy to drag it to Derry Lodge (nor could I fit my bike in the rental car) so I looked for something along Lui Water near the forest track.

I found this comfy spot just down the stream from where the car park path meets the main track. 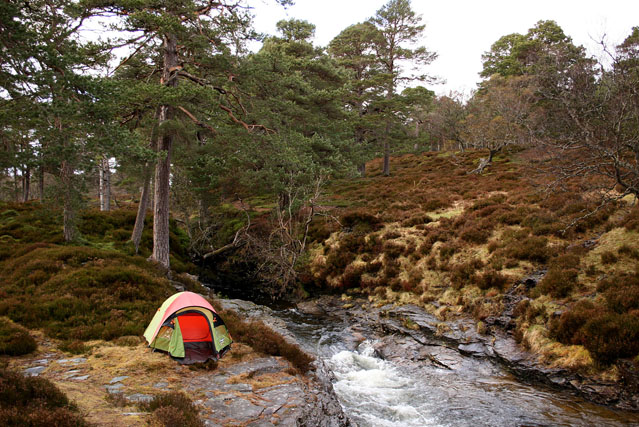 That Friday night the rain finally stopped and I was able to fire up the instant bbq and enjoyed some bratwurst and sauerkraut, not a traditional camping meal but it was tasty. The next morning I was off by 7am for Carn a'Mhaim. It was a cloudy start for the day but I kept my fingers crossed for a rain-free afternoon. 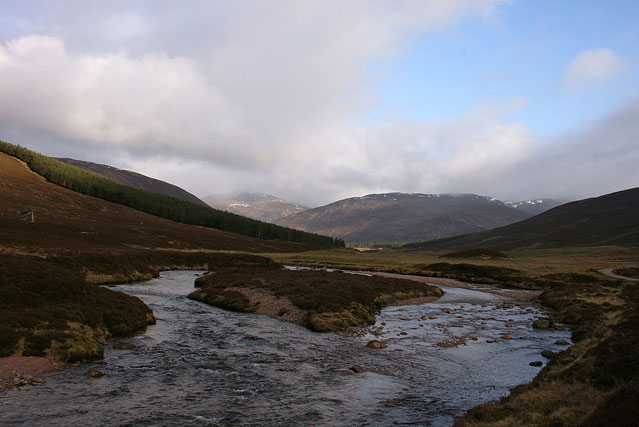 I took my time on this walk as I wanted to enjoy my surroundings and take enough photos to share my little adventure with family and friends back home. The clouds were hovering just below the summits of most of the hills and halfway through the walk I wasn't sure I would have a view from the top. The walk into Derry Lodge was painless and the path follows the Luibeg Burn through countryside that reminded me a bit of Montana. 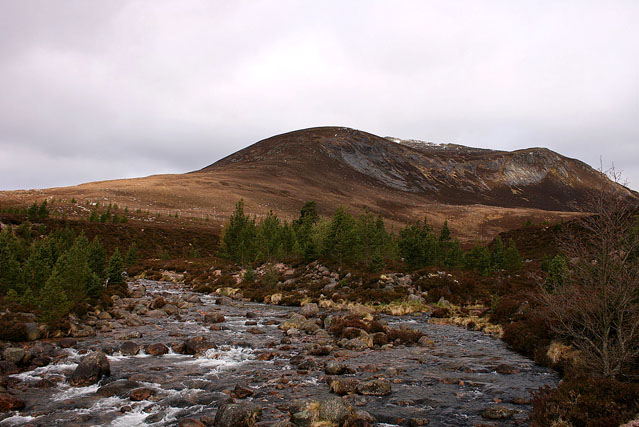 As I approached the base of Carn a'Mhaim the clouds were barely starting to break and I headed up the well-worn path to the summit. As it was my first munro of the year it took me a bit to get my legs and heartbeat adjusted to the uphill climb, but as The Devil's Point came into view off to the left side of the trail my pace quickened as I knew the view would be pretty fantastic from the top. 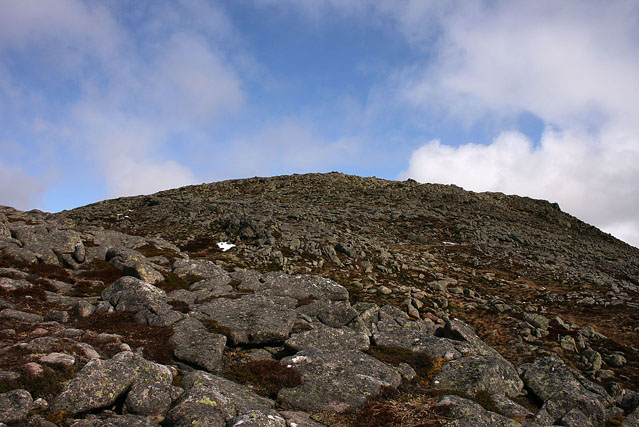 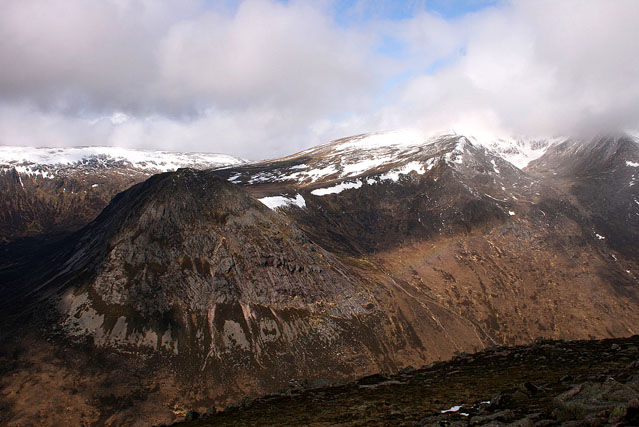 I reached the summit in about 4 1/2 hours and for the next 30 minutes I watched as the weather improved, along with my views of the Cairngorms. 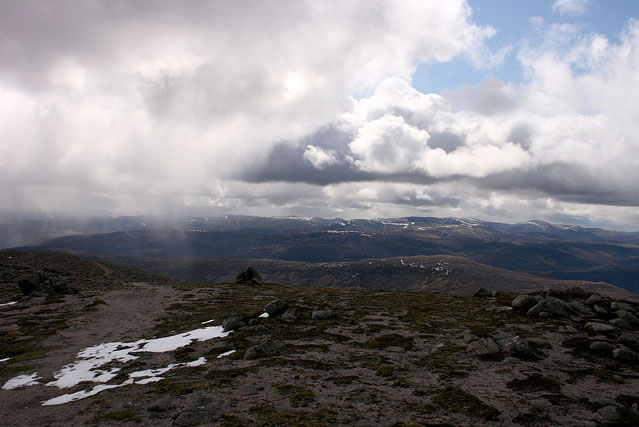 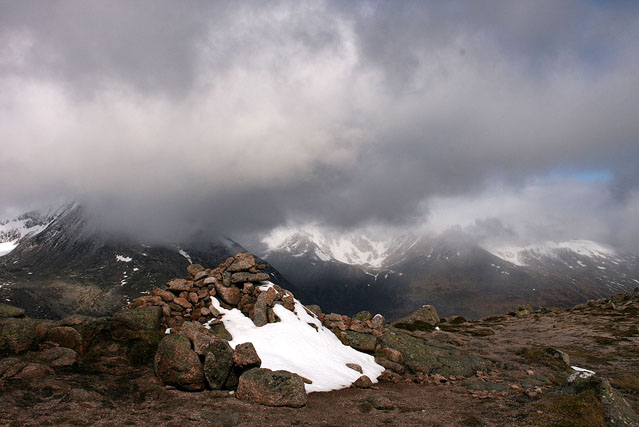 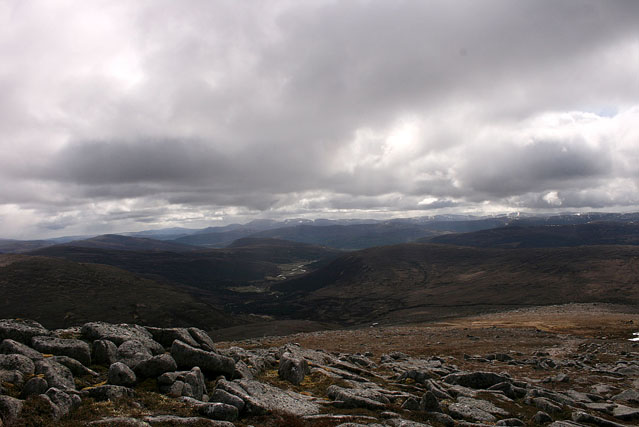 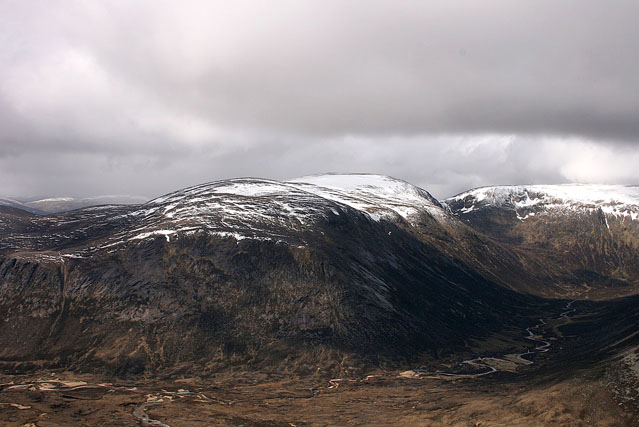 Ben Macdui and Derry Cairngorm were beginning to clear off as well and a group of 3 walkers arrived at the summit for a quick break before setting off for the traverse of both munros. 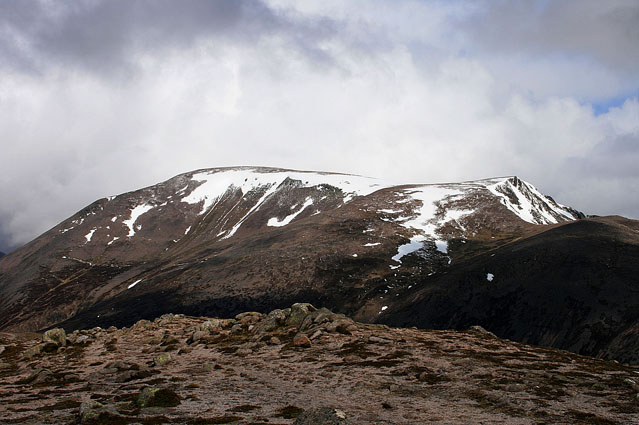 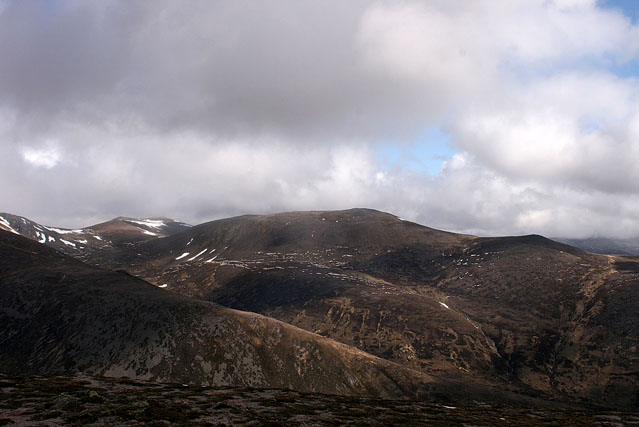 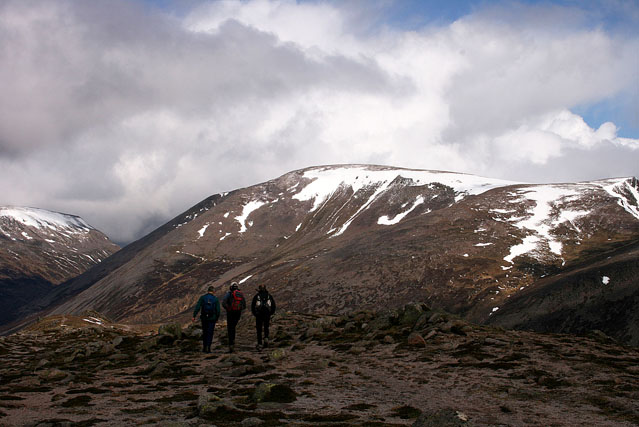 I think I was most impressed by Cairn Toul and The Angel's Peak since I was unable to see them on my previous trip up Ben Macdui in the clouds. 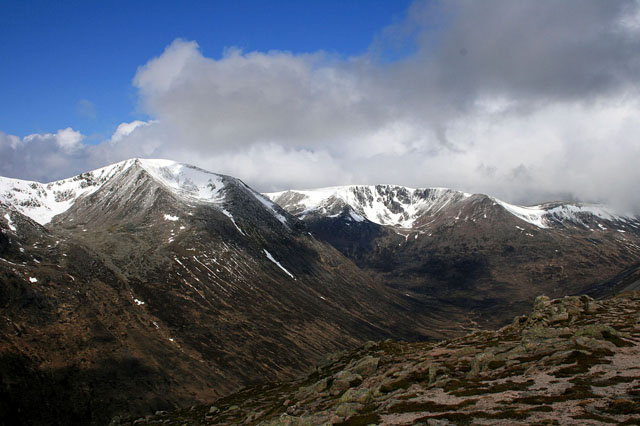 After spending half an hour or so at the top enjoying the views I headed back down with another walker from England who had mistakenly climbed Carn a'Mhaim instead of Carn Crom which he hoped to take to Derry Cairngorm. After a good chat with the off-target walker I was back at my campsite. I drove into Braemar for fish and chips and was rewarded with this view of the Braemar valley on my way back to the car park. 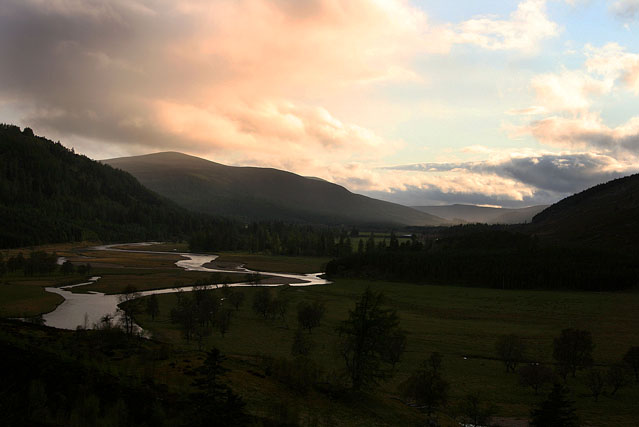 Later I took this shot of the Salmon Ladder on my way back to the tent. 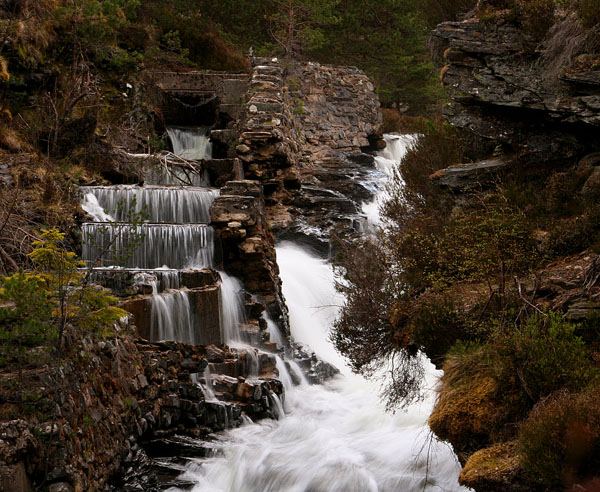 I had hoped to climb Derry Cairngorm the following morning but I was pretty knackered so I took a long stroll up the mostly flat path to the Chest of Dee waterfalls before heading back to St. Andrews. That Sunday there wasn't a cloud in the sky, but I think the clouds on the previous day made for a much more atmospheric scene. My new gear worked out really well and I used it several weeks later in Glencoe as I bagged 4 more munros in what seems to me was THE weekend of Summer here.

I would certainly suggest this munro for anyone who has been out of action for a while or new to hillwalking. The 360 degree views from Cairn a'Mhaim are well worth the long walk into the range from the Linn of Dee car park.

Lovely pictures. Thanks - brings back memories from a few weeks ago when I did Carn a' Mhaim to Macdui but in pretty poor conditions. I think the view of the Devil's Point from the summit of CAM is brillant, whether it is in the weather you got or when I was there and it was grey and claggy with the DP peaking through the greyness.

Yes, fab pics - I too love the one of the Devil's Point. Would you be happy if we used it in the Carn a'Mhaim route description (will credit to you!)

Thanks for the nice comments guys! This munro really peaked my interest in hillwalking.

Paul, feel free to use the pic or any other in my future reports, I owe this site for all the enjoyment I've had at higher altitudes

The 'off-target walker' has identified himself on my photo website

Thanks for the comments David, glad you were able to tick off a solid amount of munros while you were up in Braemar! Let me know when your heading back this way.