Let me introduce myself. My name is Boycie and I'm an 8 year old liver & tan Dobermann. My master (he likes to call himself that... and I like to humour him) and I live in the rather bleak, flat landscape of the Cambridgeshire fens. I've done a fair bit of walking in the past, with trips to Scotland (He who walks on 2 legs is of Scottish blood) and Yorkshire but never anything particularly challenging. Well, after hearing all about my master's adventures in the Cairngorms in February I managed to persuade him to take me away for a couple of days. I just hoped it wouldn't be as cold as it looks in some of his photos from that trip... Carn a' Mhaim & The Devil's Point It was 4am when we left home for the 8 hour drive up to Linn of Dee. 12:15 and we were soon loaded up and heading off the on the good path from the carpark to Derry Lodge. I didn't have any trouble with this nice flat walk but the guvnor seemed to be taking a while getting used to his heavy bag. Maybe something to do with the 3kg of my food and my sleeping bag that I made him carry... Is that Derry Cairngorm in the distance?

I was beginning to think maybe the boss had taken a wrong turning somewhere as the weather was stunning, certainly not what I had expected.

50 minutes later and were at Derry Lodge where we had a brief stop and I tried a little fishing but those pesky wee brown trout where too quick for me. There was only 3 or 4 tents at Derry Lodge and we wouldn't see another human until Loch Etchachan. Derry Lodge... not home for the night apparently We turned right once over the bridge and headed up Glen Derry with the sun still shining brightly on us. Surveying the route ahead, with Stob Coire Etchachan & Beinn Mheadhoin in the distance

The Hutchison Memorial Hut comes into view as we round the corner. I think the boss fancied a night in here (something to do with the 2 bottles of weird 'brown water' in there that he swigged from) but feeling refreshed we cracked on... The well stocked bothy with a wee dram waiting A brief climb soon found us up at Loch Etchachan and in the wind. Until now we had been well sheltered in the Glen. A couple of small patches of snow still remained.

Dropping out of the wind, the sight of Loch Avon was a welcoming one as it was to be our home for the night.

It was quite a misty morning when we woke however it soon cleared presenting beautiful views of Loch Avon and our pitch...

After a good breakfast the tent was soon packed up and we were on our way again. Heading back up to Loch Etchachan and picking up the Beinn Macduibh path, climbing steadily.

The views from the top of Coire Sputan Dearg were simply breathtaking. I had heard that, in Scottish folklore, Beinn Macduibh is believed to be a portal to another dimension and these weird cloud formations were beginning to spook me! Continuing to head upwards the path becomes a little less obvious but we were guided to the sumit via a ruined shelter but greeted at the top by more strange cloud formations...definitely a portal this one! I just hoped it wouldn't suck us off the face of the planet! A portal to another dimension?

The views across the Lairig Ghru were staggering and I could see where the boss had been forced back from reaching the summit of Braeriach back in February by the weather, although I reckon I could have easily made. It really doesn't look too steep....from here!

From the summit, our plan was to descend to Ceann Crionn Carn a' Mhaim, however the route was just too rocky for my paws and I refused to go any further. Of course, I waited until we were half way down before putting the brakes on and had a wee sniggle to myself as I watched the boss struggle back up the steep ascent

Oh he was not happy!

Still, he eventually dragged himself up on to Sron Riach where a much more simple descent would take us down Luibeg Burn and onto Glen Luibeg.

Carn a' Mhaim and The Devil's Point from our failed descent 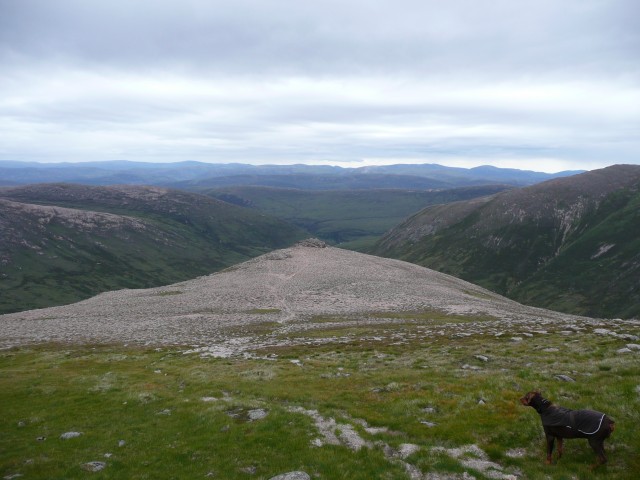 Finally down from Sron Riach

From here we were only an hour and a half's swift march back to the car. The plan had been to descend Carn a' Mhaim and find a nice spot for the tent, leaving us with a very short walk back the Linn of Dee the next morning but, I have to be honest, my paws were beginning to hurt me a bit now and we agreed that we should get back to the car today and cut our trip short. I think the boss was a little dissapointed but the mountains will still be here next time and I'm sure we'll be back... Although next time I don't think he'll let me bring as many treats with me!

Derry Lodge was completely devoid of tents and was such a peaceful place. I really can see why it's such a popular spot. great report. still to head up this way!

Hey Boycie,
We are taking our dog Nell on a similar route to yours next week...nice to have a heads up about the stony bits so we don't get halfway down like your boss!
Aimee

magicdin wrote:Shame on you Boycie - a big dug like you should have it's own rucsac

A couple of panniers & your good to go Boycie,great report by the way.

aimeequicks wrote:Hey Boycie,
We are taking our dog Nell on a similar route to yours next week...nice to have a heads up about the stony bits so we don't get halfway down like your boss!
Aimee

The old boy (Boycie that is!) coped remarkably well and far exceeded my expectations to be honest. I think if we hadn't attempted the descent to Carn a' Mhaim he would have been good for another day but after those rocks his paws were a little pink and swollen. The rest of the route was a doddle for him with the descent to Loch Avon being the only other tricky bit but only because it was steep in places. I wouldn't hesistate to take him again.

He's not exactly built for hill walking, being the best part of 40kg and with long legs! I did consider some panniers for him but it was quite a last minute trip and I couldn't find any suitable in time.