The wrong day of the week on Sgor Gaibhre & co. from Corrour

The wrong day of the week on Sgor Gaibhre & co. from Corrour


This summer holiday has been a bit different for me. As the first since the onset of fatherhood, I have not got out nearly as much as I have done in past summer holidays. Strangely enough, when I had got out, it was very often on a Thursday (my Glen Artney day and my revisiting of Bynack More for example) and here I was on yet another Thursday heading with my good friend Robin (skyepilot2) for the Munros of Carn Dearg and Sgor Gaibhre with the Corbett of Meall na Meoig thrown in as well.

The date had been decided for weeks ahead. I find it often has to be that way for me these days. Don't know why it was this particular day that had been "booked", but it had been decided way back in June before the end of term.

Sgor Gaibhre was a rather unpleasant looking red spot surrounded by blue spots on Robin's Munro map, the neighbouring Carn Dearg having been opportunistically bagged once while he was in the vicinity on a Duke of Edinburgh gig, but he judiciously decided that pushing on to Sgor Gaibhre that day would have been pushing his luck a bit. To be honest, looking at his map, I think it bugged me as much as him - there's the old OCD coming to the surface again.

We arranged a meet up for 7am at our now customary spot in Dunkeld and for once we were both spot on for time. We quickly decanted myself, my gear and Lucy into Robin's car (it's considerably more reliable and less smelly than mine) and headed north up the A9.

I had assumed we would park below the pylons where they cross the B846 road just north of Loch Eigheach, just at the start of the "Road to the Isles" track. However, Robin suggested that we could catch the morning train from Rannoch Station up to Corrour and start from there, shaving a few Ks off the distance. I'd also raised the idea of coming out over the interesting looking Sub2K Sron Smeur if time and stamina allowed, so maybe his idea would make this a more feasible and realistic proposition at the end of the day.

It was an "eventful" journey up. Crossed wires and poor communication at the Ballinluig junction resulted in us coming off the A9 (I'd thought Robin was sleeping and about to miss the exit and shouted at him to come off, assuming we were going via Aberfeldy) then taking the wrong roundabout exit to get back on it and ending up heading back south. A swift but highly dodgy U-turn manoeuver later (well, the road was very quiet) and we were back on track. Robin was then very nearly overcome by a bout of queasiness on the drive along the shore of Loch Rannoch and had to take it easy for a bit. He swears blind he only had the one bottle of cider the night before, but I dunno......

Anyway, despite these setbacks, we made it on time to catch the train up to Corrour, where we jumped off and headed in to the SYHA run place in the old station house for a quick cuppa before making tracks. The weather was looking even less clever now up here than it had done an hour or two ago further south, and one of the staff in the place alluded to what we were both only too aware of - that any other day earlier that week (or indeed the following day, given the forecast for the Friday) would have been a far better day for it than today. Well, like I said, the date had been set and we'd paid our money. We'd been dealt a fairly crappy hand though. I tried to visualise what it would be like to be snowed in in this place in the depth of winter, and I must confess that provided the stocks of beer, coffee, soup and bacon rolls held up, I quite liked the idea!

As we sat on the bar stools and drank our tea, talk turned to the big Lodge at the far end of Loch Ossian, which Robin remembered visiting years back while out on a walk and finding it in the midst of renovation works. I can't be 100% sure, as I was kind of preoccupied with trying to stop Lucy from too closely eyeballing the breakfast of the two couples sitting at nearby tables, but I thought one of the guys said that it cost £30,000 to hire out for a week and that U2 often stayed there. Och well Robin, we might not see too much today, but we might see Bono out on the hills wandering in the clag. No doubt still wearing those bloody sunglasses.

Tea finished, we set off along the track towards Loch Ossian and promptly missed the path turning off to the right just beyond the Youth Hostel. 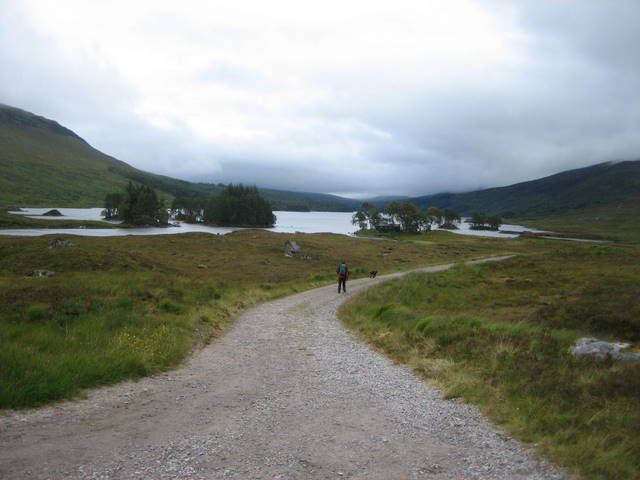 A bit of cross country soon rectified matters and before long we were having a breather at Peter's Rock, which commemorates the life of a guy who I believe lost his life after going out onto the ice on Loch Ossian one night and falling through it, his friends not realising for ages what had happened to him. We followed the path south for 10 minutes or so until we found what looked like the best line of attack up onto Carn Dearg from the west over Gualainn Clachach. Only higher up did a path materialise and the going became a bit easier. Looking down on Loch Ossian and towards the hills at the southern end of Loch Treig, Meall na Lice on the left

The views from Carn Dearg were, how shall I put this, well they were....... just look at the pictures yourselves and complete the sentence with your preferred choice of expletive. Poor Robin - all this for a Munro he'd already done on a day with no views and here was history repeating itself. You pays yer money....... Onwards across the Mam Ban towards Sgor Gaibhre and more views which were simply ........ once again, I'll leave it up to you, Dear Reader, to draw your own conclusions and insert your own adjective of choice...... We popped down into a sheltered spot on the southern slopes for a bite of lunch, at which point we were treated to some fleeting glimpses of Loch Ericht and I could have sworn blind that I spotted someone who looked suspiciously like Gammy Leg Walker!!! Then it was on through the Bealach Leathann and the tricky navigation around the clag-bound lochans up onto the gnarly summit of Meall na Meoig. 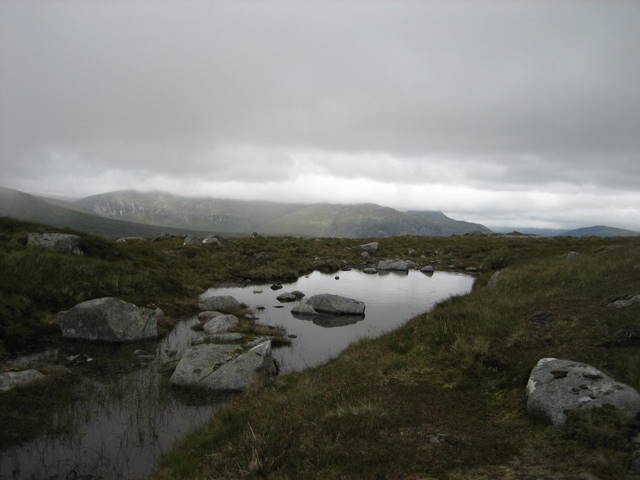 Ben Alder from the south west The smaller of the two lochans below Meall na Meoig Robin takes liquid on board at the Corbett summit

From there we decided to head down through the coire on the western side of the Beinn Pharlagain ridge instead of heading along the ridge and dropping off the kind of steep looking Leacann nan Giomach. Once over the river it was a straightforward yomp back down the path to the bridge. Dropping down into lower Coire Eigheach Southern termination of Beinn Pharlagain ridge from the bridge

At this point Robin decided to give Sron Smeur a miss but I was game, so he went on ahead to collect the car from Rannoch Station and wait for me at the end of the track out. I dumped my pack and poles and half walked, half ran up the heathery slopes onto the summit of Sron Smeur before looping round and dropping down onto the service track for the boathouse on Lochan Sron Smeur and then back to the Road to the Isles.

Sron Smeur is one of those insignificant little hills on paper but boasting fantastic views of more grandiose summits and countryside round about - Loch Ericht, Ben Alder, Beinn Bheoil and Stob an Aonaich Mhor one way; Blackwater Reservoir another; Loch Laidon another way and Loch Rannoch with views over to a distant Schiehallion in the other. Great stuff! 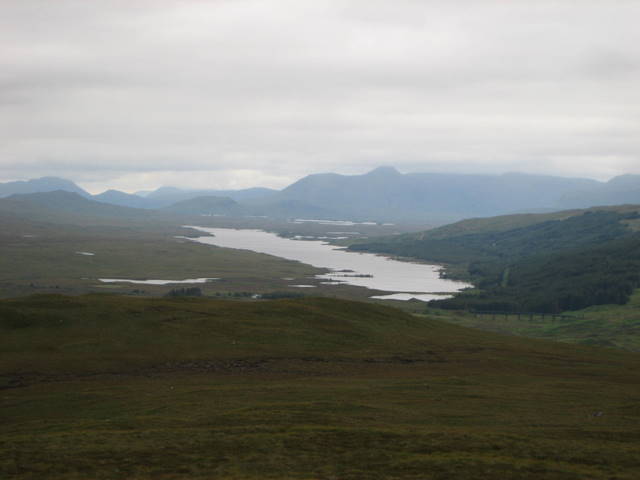 Graeme Dewar wrote:I could have sworn blind that I spotted someone who looked suspiciously like Gammy Leg Walker!!!

Sorry Graeme,cant blame me for this one,like you said you pays your money and takes your chance.

I find walking in the clag character buiding,so does that make me some character

Ive yet to do anything at Corrour but fancy doing them by cycling in/out from loch laggan.

Well done on getting out and leaving the wife with the little one.

Got an eye on exactly this route at some point, although I'll be using the train at the start and end...not quite sure if it's doable between trains!

Unlucky with the weather. I find it always seems to be the way if you plan a long way in advance. Sron Smeur probably seemed like a nice little addition as it was low enough to give some views. I did the two Munros in similarly rubbish weather, with added pelting rain, so I'm definitely hoping for better conditions for a re-visit.

Another interesting report Graeme, i've been eyeing up this round but from the south.Was that the best route to Sron Smeur, rather than go over Beinn Pharlagain?

Wrong day, driech day or any day.... you guys still managed an impressive day out.

Loved your photos too. Especially the one of you trying to stop Lucy from dragging you along the station platform and the one of that MASSIVE cairn!!

Cheers everyone, not a bad day really all told!

Johnny Corbett wrote:Another interesting report Graeme, i've been eyeing up this round but from the south.Was that the best route to Sron Smeur, rather than go over Beinn Pharlagain?

Probably six and half a dozen I'd say. Maybe more mileage but less steep at the end of the day.

Sron Smeur is a cracking wee hill, although I found the burn (Allt Chalder) difficult to cross to get to it.