I had been up Kinder Scout before: last summer, on a terrific route seeing some of the highlights of the plateau – up Grindsbrook Clough, navigating a group across the moor to the Downfall (I felt so proud of that! But rather lost my reputation when somehow going 180deg wrong off a misty Scafell Pike a few weeks later…), past Kinder Low and down Jacob’s Ladder. Great stuff. And I thought I’d ‘climbed the mountain’.

But then I became rather more of a ‘bagger’, I learnt that I hadn’t actually been within 500m of the actual summit, and it started to gnaw away at me… So this was an evening return to my ‘local mountain’ to rectify that… But there’s so much of the Kinder plateau to see that it seems you can walk up and around four or five times and barely tread the same ground again; this way visited the highest point from the southern edges.

our_route.gpx Open full screen  NB: Walkhighlands is not responsible for the accuracy of gpx files in users posts
The first stretch of the Pennine Way west from Edale must be among the most-trodden routes around, but it’s still very pleasant going – gently upwards through the broad valley on an easy flagged path. 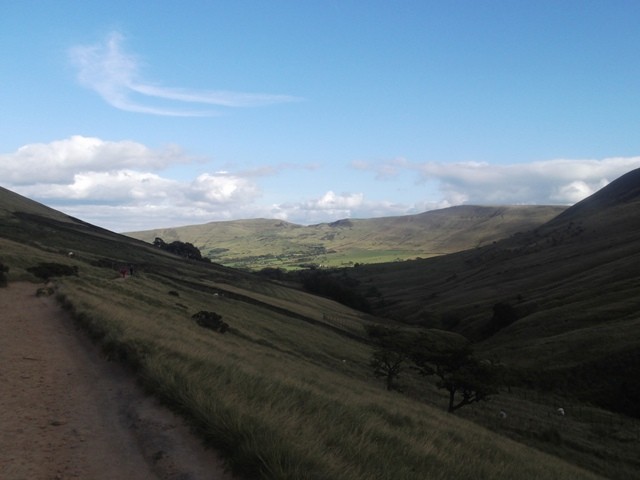 Back down Noe valley towards Mam Tor

From the bridge at the foot of Jacob’s Ladder, there’s a faintly-pathed route steeply upwards through the cloughs to the plateau. It’s attractive – lushly vegetated and enlivened by little rocky falls - and very quiet, but still pretty tough going, especially lower down where you need to clamber up and around the quite vertiginous green banks as the clough narrows. Further up, as the stream gets shallower, you can head up its bed and the upper slopes are a good scramble over huge sandy boulders, much like a rougher, wilder version of the Grindsbrook ascent. 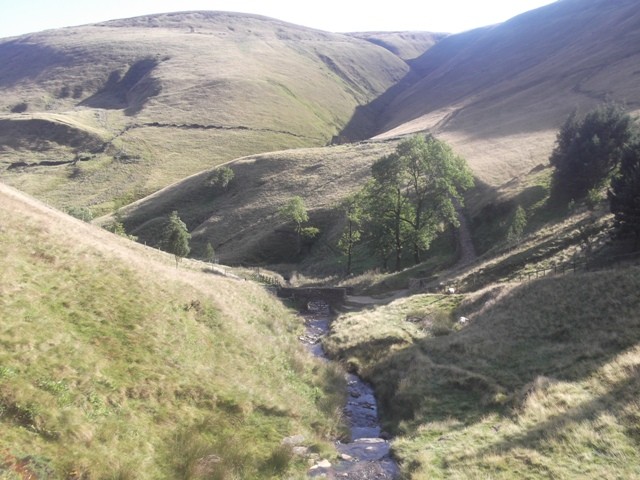 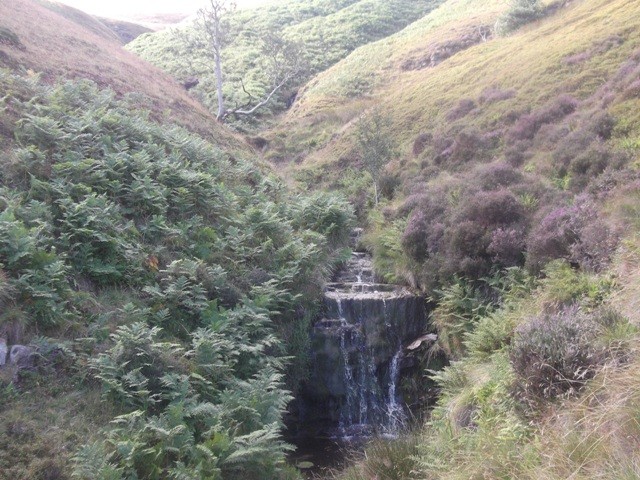 Falls in the narrowing clough Towards Crowden Tower during ascent

You come out of the grough onto the vast peaty Kinder plateau in a position where you can look over a sweep of the landmarks of the southern edge, from Kinder Low across to Crowden Tower and, just faintly in the distance to the north-east, the little pole marking the imperceptible summit rise. Zigzag through the hags and (dryish) peaty hollows and you’re soon there – in the sunshine there’s something beautiful about the broad flat views all around; in other conditions you can imagine why few might reach this point! And perhaps they won’t have to forever – the elevation of the cairn in the peat shows how much the ground around is eroding; I guess it won’t be long before somewhere else becomes the ‘summit’… 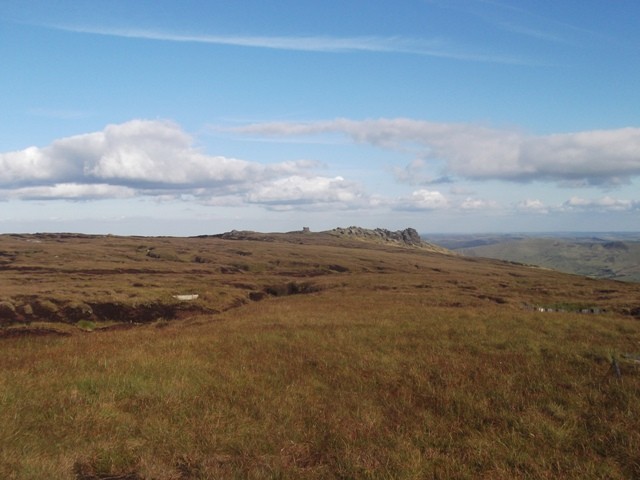 Approaching the summit of Kinder Scout through the peat 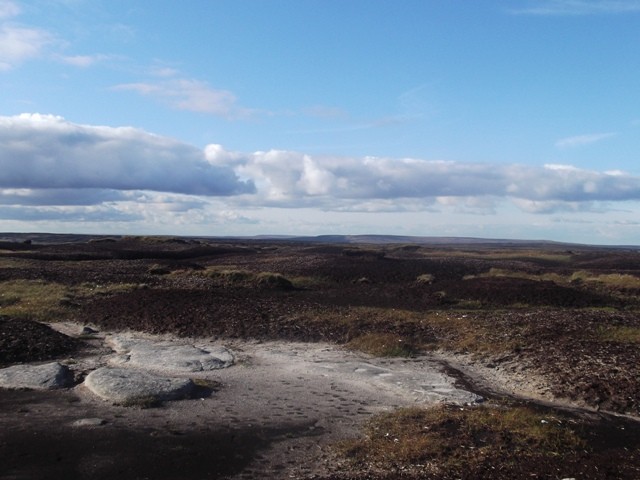 North across the Kinder plateau 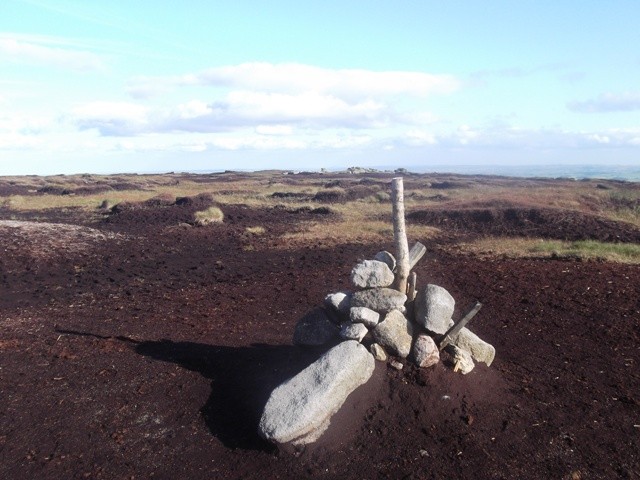 View south from Kinder Scout summit to the Woolpacks

After cutting back south through the sandy groughs, the edge path leads through the head of Crowden Clough and around to the more obvious peak of Grindslow Knoll. This is a nice little hill, with really good views down to the classic ascent up Grindsbrook Clough and the eastern spur of the plateau. 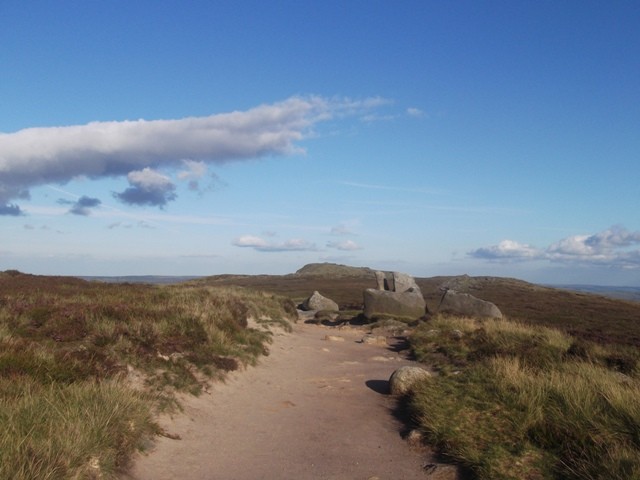 Grindslow Knoll from the edge path 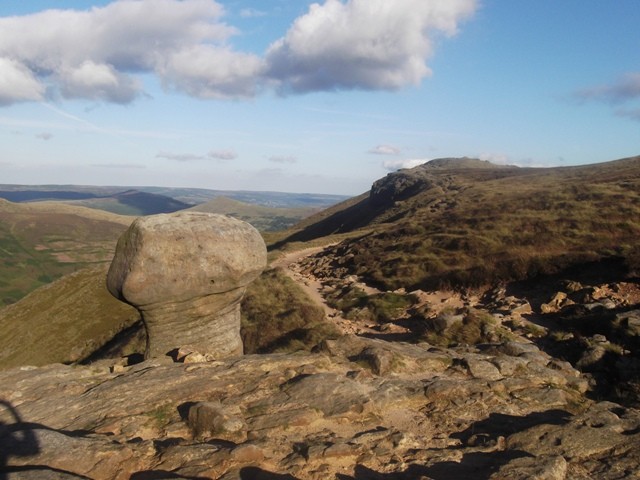 Quite a steep and eroded path descends east back to the start of the Pennine Way and back down through Edale. This was a quieter and shorter route to Kinder; perhaps not the very best, but with enough views and ideas to tempt you back to try something else again. 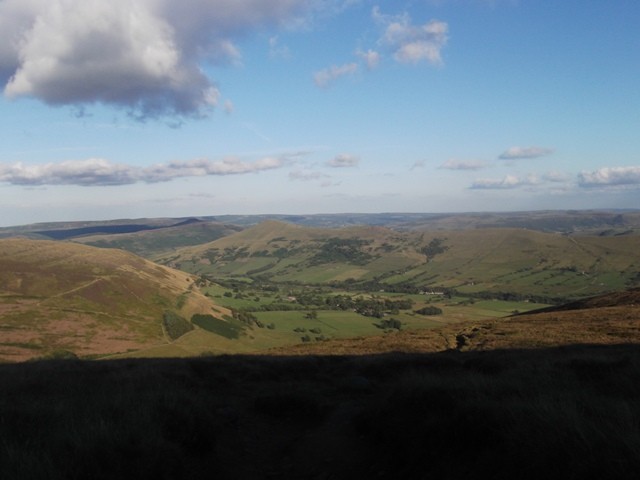 Kinder eastern edges from near Edale

Those pictures bring back memories. When I was eight I went up Kinder Scout with my cousin. Just after we started to come down from the top, I fell off a small ledge and cracked my head open on a rock. My cousin had to carry me down with blood gushing out of my head, and when we got to the bottom there was some kind of mountain rescue / first aid place, and the guy took us to the nearest hospital...and then promptly called the police because he thought my cousin had been beating me up! The police came to the hospital and questioned him, but i think they finally realised he hadn't been beating me up when i kept begging my parents (who had also arrived by that time) and the doctor who had just stitched up my head if I could go back to the campsite with my cousin and carry on with the camping trip