Lochnagar Horseshoe in the Clouds

Lochnagar Horseshoe in the Clouds


With the weather forecast showing showers and rain heading in from the west I decided on a route I had done previously in good weather. As Loch Muick is just over an hours drive away from my hometown a pick up at just after 7am on Saturday morning allowed my walking companion for the day and I to be heading away from the pay and display carpark(£3) at the loch before half past eight. A quick visit to the well maintained toilets (clean at this time of day if midge infested) and we headed off following the broad path towards the south shore of the loch. Ignoring the first of the paths that led at an angle off up the hillside to the south-west we continued on until we crossed the bridge over the Black Burn then left the lochside and headed up the switchbacks to the top of the plateau. As we reached the top we headed into the base of the clouds; at first the visibility was intermittently bad but as we continued along the path it closed in to around 60 yards. This was to be the standard for the next 5 hours as we stayed mainly above the cloudbase, at no point while at height did the visibility ever improve above half a mile and at most times was down into double figures of yards. Given how clear the path is around the whole circuit of the 5 Munros planned for the day this wasn't really an issue but did allow a bit of map and compass work to brush off the micro-nav cobwebs (the last time I had used that particular skill set was during a winter mountain course in a whiteout in a gale to the north of the Lairig Ghru trying to find the very flat summit of Castle Hill). The walk in to the first Munro of the day took about 2 hours with our first indication of company being the weirdly echoing voices that came out of the clouds well before we came across a group of three walkers huddled round a map at the crossroads where the path they had followed up beside Corrie Cash Burn from the loch joined ours. Their interest was in how bad the midges were in the direction we had just come from as apparently the route they had taken had been full of the things. We were able to tell them that the wee beggers were out in force down lower but not too bad until you hit the switch backs down. We left them to be swallowed by the clouds and continued up to the wee rickety looking building with Sandy's Seat at the side before breaking off to the right onto the path up to Broad Cairn, our first summit of the day. We had been seeing mountain hares for the last hour or so lolloping in and out of the clouds and they were out in force on the upper slopes. A quick photo or two at the cairn (my camera died at this stage - learning point for the future: charge it!) and a wee bit of sugary morale and we were off down the bearing for Cairn Bannoch. 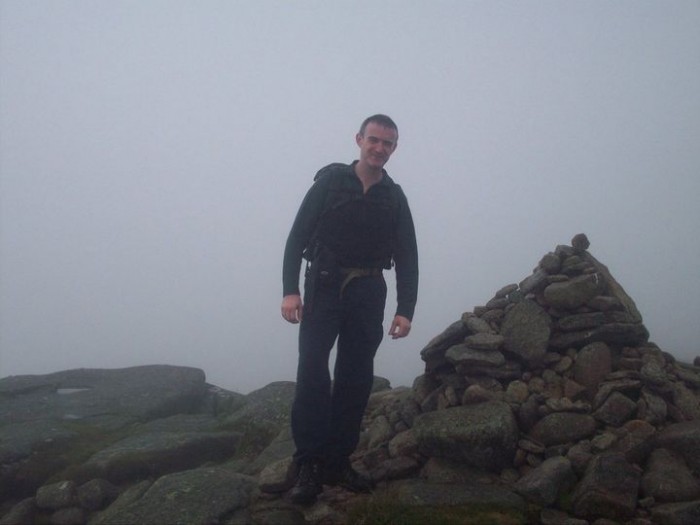 A few hundred yards after leaving the summit and the well defined path made itself known again and it was an easy wander along in the greyness. I had done the same route in late April under blinding blue skies with occasional snow fields dotted about so was able to wax lyrical to my companion about the sights he could have been seeing; for some reason he seemed distinctly unimpressed. With the poor visibility the sharply defined summit reared out of the gloom surprisingly quickly and it was a quick pause for photos (not on my camera) before a wee hop off the back of Cairn Bannoch and the dip down towrds Carn an t-Sagairt Beag.
We dropped below the cloudbase briefly and caught a glimpse of some deer in the distance and some black grouse a lot closer. We also saw the decapitated bulk of the next Munro ahead with the path leading straight up its side. Soon we were back into the monotonous grey interior of the clouds and again it was the voices of the next couple of walkers that reached us well before they materialised out of gloom. They were doing the same circuit as us but in the apparently more usual anti-clockwise direction. The first summit cairn appeared to the left of the path and we decided to crack on and visit the second cairn as well (always pays to make sure!). Carn an t-Sagairt Beag - Third Munro of the Day

We returned to the first cairn then struck out due east rather than drop back down to the path to Lochnagar we had cut across while coming up the hillside. A quick steeper drop and we passed the wreckage of the aircraft on the eastern side of the hill before arriving at the boggy ground where the Allt an Dubh-loch rises. A quick skirt round the worst of that and we rejoined the path leading up towards The Stuic. An easy river crossing and it was the long seeming slog up towards the crags. Our third group of walkers for the day passed us, going in the opposite direction again, half way up the slope. They were a couple out doing the circuit but throwing in some corbett tops as well.
Once the climb levelled out the tiny wee cairn marking the path off to the right to the summit of Carn a Choire Bhaidheach appeared and we headed off for the easiest Munro of the day. It probably only seems that way as it is a little side jaunt off the circuit and you have already climbed the 180m from the burn below anyway on the way to Lochnagar. The easy few minutes and slight incline required to add number four for the day seems to give a disproportionate reward of an extra summit ticked off for very little effort. Returning to the main path we dropped down slightly and paused for lunch at the base of the last steep climb of the day up to our final Munro.
Setting off fortified with sandwiches and chocolate we nipped up the last steep incline and headed off along the motorway of a path to the viewpoint at Cac Carn Beag gaining our fifth summit of the day five hours after setting out from the car park. Again my descriptions of what we could have seen had we been able to see beyond the edge of the cliff in the clouds seemed to fall on deaf ears. Lochnagar - Fifth and final Munro of the day

Lochnagar was living up to its reputation as a busy mountain as we had seen four walkers stopped for lunch near to us and a father and young son pausing for a snack just below the summit. It was during the walk back along the top of the corrie towards the stone staircase that the largest and slightly unsettling group was seen. Spread out in ones and twos across the whole width of the top came ten to twelve shambling figures lurching out of the fog towards us eerily silent in their intentness on their footing. An overactive imagination on the part of my walking buddy for the day had him drawing comparisons to the zombie movies of the past few years. As the nearest of the group tottered their way past (the footing honestly wasn't that bad) a quickly muttered "Guten Tag" sorted out their origins. As the wave of teutonic tourists faded into the clouds we carried on following the line of cairns around the top of the cliffs to the top of the staircase.
The walkers were coming thick and fast now and we passed a further couple of groups of two or three (at least one with a distinctly native doric twang to accompany the trainers and poly bag presumably holding his piecee that were his kit in the 60 yard visibility). A further two groups of four were passed as we completed the descent of the staircase and headed off for the long slog back down to the car park. The majority of this was on the larger track that runs from Balmoral to Loch Muick and is a bit of a nightmare of larger loose stones which aren't particularly forgiving of feet that are an hour into a descent having already been on the go for six. There was one further quick river crossing, staying dry on stepping stones prior to the flat walk out across Glen Muick and back to the car park. One final stop at the by now slightly less clean but still as midge infested toilets and it was back in the car 7 hours and 5 minutes after getting out of it. All in all a decent days walking with very little visibility for most of it but the satisfaction of just having beaten the rain home with no blisters and plenty of time to get to the pub back home.

Re: Lochnagar Horseshoe in the Clouds