Not many rave reviews for these two although A'Bhuidheanach Bheag has the distinction of being munro number 1 in alphabetical order and last in order of popularity in the WH list.

Started at the most depressing spot to start a walk in Scotland. A lay by with a wheelie bin in the fume filled trench of Drumochter - all tarmac, traffic noise, pylons, plantations road signs and construction sites. Still, I must have driven past here a thousand times so it must be time to investigate what is up there. The quarry road doesn't bode well either.

It does however provide a quick route up and from 2000 ft you lose the road noise and are in a silent world of heather, sky, hares and grouse.

The quarries (not clear what was worth quarrying and bringing down from up here) are far from the cliff edges shown on the map - more a few patches of gravel.

The landrover track continues almost to the summit of Carn na Caim - probably the only munro that you could get up and down on a mountain bike without getting off. The track to Carn na Caim

Drumochter was swallowed up in the landscape and a view across to Loch Ericht opened up. The top of Carn na Caim is a pleasant green meadow on a sunny day. It also reveals a view north to Meall Cuaich and Strathspey. It's not clear where the stones for the cairn came from. 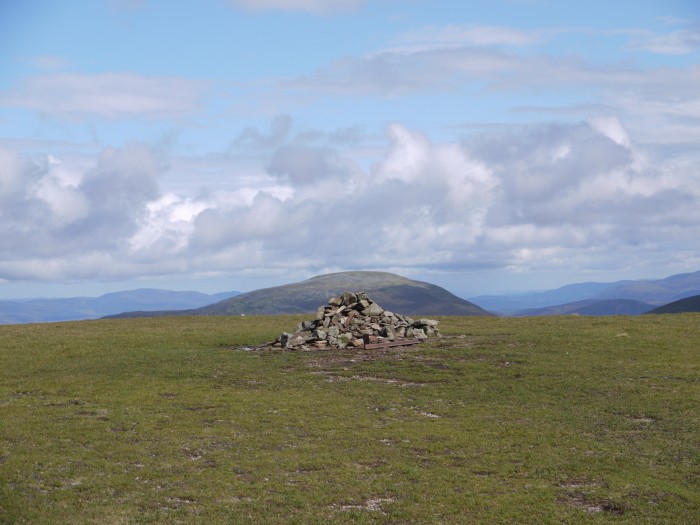 Headed back to the quarry and down another landrover track past a curious white cairn made of quartz. A dip into a valley and a plod up a gentle grass slope and across a bog to reach the top of a Bhuidheanach Bheag which must be one of the least inspiring tops in Scotland. Someone had tried to liven it up by putting a boulder on top of the trig. presumably with the intention of creating an inverted exclamation mark. I'd had enough of landrover tracks by then so I headed off to the east over Meall a Chaoruinn. An unexpected view of Loch Errochty glinting in the sun appeared. Sadly these two are still on mt to-do list

My only solace will be the mantra that there is no such thing as a bad hill walk, although I suspect these two might just push that statement to its limits

I guess we need hills like these though, to really appreciate those that simply take our breath away.

try doing them in winter to add some adventure .

not much to fall off if your crampon technique is rusty

Love the white cairn too!!!

icemandan wrote:Started at the most depressing spot to start a walk in Scotland.

it depressed me just looking at it

What a strange place with all these weird cairns and things, not to mention a landrover track going up it

At least you added two more Munros to your count

I'm thinking about doing these two in winter conditions, just to spice this boring-looking walk up a bit. I was up the neighbouring Munro Meall Chuaich last November - lovely views towards snowed-in Cairngorms

Didn't think I was going to enjoy these too much and was just looking on it a as leg stretch on a drive up to Beauly.

I was pleasantly surprised, once up on the plateau the views across to the Cairgorms and back to across to Loch Ericht are fantastic and I actually enjoyed being able to stride out casually along the easy grassy slopes on what was a sweltering summer day.

If you're a bit strange like me and into that sort of thing you can also visit former munros (glas mheall mor) and should they be munros (a bhuidheanach bheag's twin top).

There's some not-bad views from these - better than I had anyway.

Cheers for the report though - you just inspired me to investigate a route from the other side - cycling to Loch an Dun down Glen Tromie and doing a circuit from there. I'm thinking a crisp autumn or winter's day maybe

I generally subscribe to A Wainwright's view that there is no hill that is not worth climbing. The wide open spaces, big skies and easy striding terrain have their own appeal athough there is plenty of that sort of stuff nearer home in the Pennines and Southern Uplands. I like the way this sort of country turns into polar ice cap in winter.

The eastern approach looks more interesting and could take in Glas Mheall Mor, which looks like the best hill in the group.

Dont think I'll be rushing back though.

You need to make sure these are frozen solid if doing in winter. Some mighty big bogs to venture into!!

Goodness me! Were you in a right grump when your wrote this? The most depressing spot to start a walk in Scotland AND the worst cycle track in the world?? You were out on the hills, what's not to like?