My walking companion Brian and myself did these two Munros as our first outing of the yearin April. I had wanted to to make it a circular route to include Carn Dearg but once Brian saw that it took 8-10 hrs, he reminded me that it was our first outing of the year and that we should break ourselves in gently, so Carn Dearg was put on hold for another time. The weather forcast for the day was looking good with sunshine breaking through in the afternoon.

our_route.gpx Open full screen  NB: Walkhighlands is not responsible for the accuracy of gpx files in users posts
We parked the car in a parking area, just outside Newtonmore, near a small forestry area and set off at 9.30am. 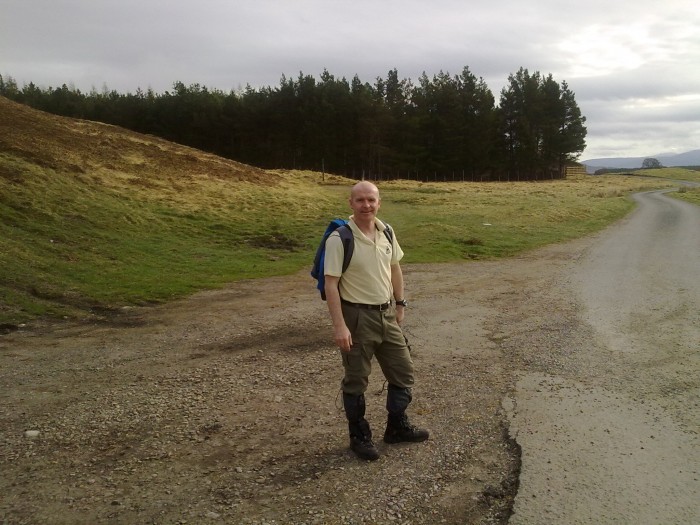 Me at the start.

The track to the left of the trees is well defined and gives a nice warm up for the legs as it gradually gains height. A'Challieach in the distance centre of the photo.

After about 20 minutes the track runs out and becomes a small (at times boggy) path. Looking back along the path we took.

Soon we could see the small bothy up the hill and crossed the river which was quite low and finding stones to cross was easy. There is a very faint landrover track up towards the bothy but we just headed straight up towards it over the heathery ground. If you have the time, have a look inside and read the names people have signed on the roof, some go way back. Also have a laugh at the piece of paper with the bothy rules, it is very funny!! Brian outside the Bothy.

Head off to the right of the bothy and head up the right hand side of the stream. Here the terrain gets a little steeper but nothing too burn the thighs! Looking back down to the bothy, you can just about see it centre right and in the background you can see the ascent track and the starting forestry plantation.

After a while the slope eases off and becomes a flatter heathery and at times marshy walk. At this point the summit was off to our right but the route told us to go to the bealach off to our left. There must be a reason for this as this was a longer route but maybe it gets very boggy, if you take the direct approach. Brian as the slope eases off, with A'Chailleach over his right shoulder but our route took us to the bealach over his left shoulder.

The ground was flat but boggy. Flatter ground, looking back from where we came.

Eventually we reached the bealach. Two hours after starting the summit cairn came into view. I forgot to mention, that this was the first time that I had used Viewranger mapping on my phone and up until the summit it was working a treat but then my phone froze and I could not use it and had to rely on Brian's trusted Garmin e trax (Found out later on the internet that my phone, nokia 5800 sometimes freezes and all you need to do is remove and re insert the memory card. I have since used viewranger on 4 more trips without any problems and am really impressed with it, but always have a paper map back up.) Our route to Carn Sgulian took us down a steep grassy slope and crossed a small stream, the it went steeply up for a couple of hundred feet but once again levelled off and the route to the second summit was straight forward. On the way there was still a few patches of snow that would have been great for sledging. Me with A 'Chailleach behind me as we headed to Carn Sgulian. Where the snow is, there is a steep descent into a gulley. Instead of heading back the way we came up, we headed straight off the summit down into Allt Cuil na Caillich and followed the river back to our crossing point at the bothy. This route I would recommend as it was more interesting and scenic and gave a better view of A'Chailleach. Brian in the gulley. Me watching where to go. Brian with Am Bodach in the background.

Our route back was a long walk following the river down. Our route along the river

There were some nice views of the old lady. As we wound our way along the river the sun was getting hotter. Close to the bothy crossing we came across this monster boulder, time for a posed photo. Looking for the nearest bar!!

Eventually we met up with our inward path and at 2.15pm 4 and three quarter hours after we had started. These two are quite easy to do and following the river back made it a more enjoyable experience and the cold pint in Newtonmore hit the spot.
Last edited by chieftain41 on Wed Sep 07, 2011 3:46 pm, edited 1 time in total.

Really good report. I have Viewranger on my phone too and hasn't failed yet. But like you I always take a map, well done

Don't fancy that bothy too much!