A good day on some 'dull' hills

A good day on some 'dull' hills


Expecting the cloud base to be low I thought I would try these two Munros. They have the advantage of good tracks to follow a good deal of the way according to the various descriptions.
Set off at around 09:00 and was expecting a boring slog up the track having read previous reports. I was having the same opinions crossing the A9 and through the gates and into the roadwork road. I was immediately stopped in my tracks by a large group of small birds, Wheatears and Meadow Pipits, being very active. Quickly realised a Sparrow hawk was causing a lot of commotion. This was followed by a Buzzard lazily crossing in front of me. Now looking forward to what I would see next spurred me on. On the way up it was interesting to see the shooting butts, an interesting sight being a Red Grouse sat on top of one, shortly after followed by a sight of a Mountain Hare. As I got towards the quarry I could not see 20 metres but still had a pair of Golden Plover take flight.
I got my self oriented at the fork in the tracks and was deciding which one to do first when the cloud base lifted and I could see the day before me. 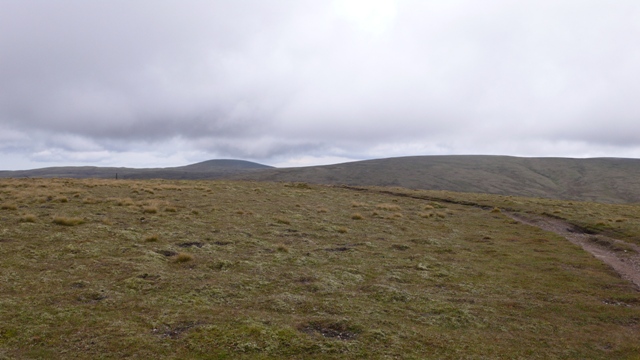 I thought A' Bhuidheanach Bheag first as this looked to be the more challenging route finding if the cloud came down again. I made good time along the track and soon arrived at the summit. The top next door, Glas Mheal Mor, actually looked higher to me, shows how deceptive these things are sometimes. A stop for the obligatory pictures and off to the next objective. Passed a group of 3 people on the way, somewhat surprised as I expected to me alone for some reason. Passed another group before I got back to the 902 height.
On the way over to Carn na Caim I had a good view of a pair of Golden Plover, solitary Ptarmigan followed by a pair fairly close. Arrived at the summit and was feeling cold. On with another layer and settle down to some food. I was missing my usual brew as stupidly I left my Jetboil at home. Set off and made good progress back to the start, another Hare was seen on the way back to the quarry. A few showers came across about halfway back down the track. Not enough to spoil what I was expecting to be a dull day but with the wildlife and views it made for a very good day.
Followed it up by visiting the Insh Marshes where I had my first sighting of a Marsh Harrier. What a good day. Re: A good day on some 'dull' hills

nice report,i think i passed you that day(the date on my report is wrong)......i was the nutter on the bike! lol you certainly seemed to have a much better day than i had,didnt really enjoy these hills,maybe rushed them too much

Re: A good day on some 'dull' hills

Ah!! Ian Watson so you are the crazy guy on the bike. Bet you made good time on the way down though

. I was thinking I was getting off the hill at the right time as the showers started.
I do not have a bike yet but am considering one for christmas, presuming hints are taken!!