The Storr and some old bloke of the same name!

The Storr and some old bloke of the same name!

Grahams included on this walk: The Storr


Having arrived on Skye on Sunday 21st armed with a range of walks and climbs, I made an executive decision that The Storr was a must. Its such an iconic place, we could see it from miles to the south at our campsite at Portree and the temptation of the rocky scenery and photo ops were too good to pass up. We new this would be a half day climb so we combined it with a tour of the northern part of the island
.
Todays weather forecast was set to change from the fabulous few days we had so far, and the campsite attendant advised the rain was due to start around 1pm, so rather than our intended morning tour and afternoon climb, we turned that around and decided to climb first,,,good choice!

We only had 7 miles to travel up the coast to the car park at The Old Man of Storr. Only a few cars around but the public bus had just dropped off too and there were quite a few people heading up into the trees.

The first part of the walk is up through pretty thick forestry with nothing much to see, but it opens fairly quickly to the ground below The Storr, the guide states at this time, its hard to make The Old Man out, against the backdrop of cliff and indeed we couldnt really see what we were looking at,,, until the sun came out! The old man makes an appearance We spent quite a while taking pics, admiring the view and soaking up some sun. Another wonderful day, some dark clouds up and over The Storr itself at times, but no real threat of rain. The photo ops here are fabulous,,hope you like these..... Views over Loch Leathan and the Storr Lochs Needle Rock on the right, Old Man on the left, taken from the North 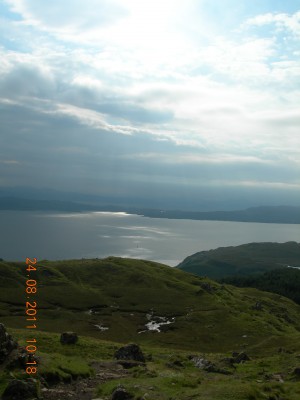 Looking East out over the sea

After passing Needle Rock, you head in to the base of the cliff and have to cross a fence, Dont bother with the pretend stile, its just a broken bit of wood!! we crossed using boulders on the ground but if you have long enough legs,,,its not an issue (sorry Margaret)

As we cleared the gully, we took the left fork which is apparently slightly easier but still meant a steep scramble up the front of the cliff. You then reach a lovely open area and the faint path off to the North can be picked up and followed up to Coire Scamadal. On the map, Scamadal is more or less the end of the rocky stretch and its an obvious point for the easy scramble up to the Coire before you double back on yourself. You get a very clear view of a long clear ascent up the escarpment. The views to the North and the Trotternish Ridge are spectacular. Each curved stretch looking like someone has leant on it and pushed the coastal side up out of the ground, a feature that is echoed from the East, around the North and back down the West. Me, The Trotternish Ridge heading off to the North The walk up the escarpment is fairly non eventful. Big long / broad stretch of land, grassy and littered with rocks and a very pleasant way to spend half an hour. The cloud was building up more now but again, no real threat of rain at this point. You reach the trig point in no time and again, you have to spend time admiring the fantastics views. We could see right across the island, passed McLeods Tables to Neist Point where we had spent some time the previous day. The visibility was great, a little mist out over the sea and the sun filtered through cloud gave everything a wonderful silvery sheen.

As we headed down off the top, we had read that we were promised great views looking back to the Old Man but while we stopped for a spot of lunch, we realised we were a touch too far inland. Warnings about keeping a safe distance from the cliff edge obviously in the fore after our near death experiences on Monday in the Red Cuillin. Heading down from the summit Down off the top and great views to the cliffs below

Checked the map and decided to head over to the cliff edge and follow it down to the burn and our route of descent from the ridge top. As we reached the edge, we indeed got the views we had been looking for. Looking back to say cheerio to Desmond There are about 2 deep rocky gullys which we skirted round. We had read warnings to ensure we selected the gully with the burn to descend by and NOT to use either of the first ones.. To be honest,,not quite sure anyone would possibly see these as a way down, unless you were armed with ropes and a steely nerve.

We could see no sign of a burn and as the land sloped down hill to the west from the clifftops, I was beginning to wonder where the source of this burn was going to be. No fear,,before too long, little rivulets started to appear at various points across our path and made their way down to a hidden dip. At this point, we started to pick up other footprints in the peaty ground and the burn became a lot more obvious.

We followed the ground down to the rocky burn route down. We had been a bit concerned but on getting there, it was a pretty easy scramble down over the rocks and on to a steep path to the moorland. Down through the gully, rocky but nothing out of the ordinary

After being pretty dry all day, on crossing the moorland to the tree line, we had to negotiate a few very wet/boggy areas with running water, but hey,,we were almost back at the road.

As per the forecast,,rain was on its way, but by 13:40 when we hit the road,,still no sign of it. (It started a bit later as we toured the very Northern tip of the island.

The route takes you back out about half a mile from the car park and although there is a sign (on the outside/road facing) side of the fence that there is a gate about 100mtrs back in the opposite direction...we didnt see that until we had crossed the fence. Not particularly helpful, note to planners.

Theres not a lot that can be said about the walk really, it has nothing hidden, great views, and a lovely day out. Such a fantastic location and we got to see it in very good conditions. If your in the area,,its only a half day. Do it! Me, getting the needle