We started off along the quiet road alongside the river in Val Veni, and although there were small sections of woodland along the way, most of the scenery appeared very barren and Mediterranean. As we gently ascended, the landscape opened out and soon we reached Lac de Combal, with white rolling glaciers including Glacier du Miage to our north. Eventually the Refuge Elisabetta Soldini came into view. It appeared quite close, but it was another half an hour of zigzag ascent before we finally reached it. I rewarded myself with a hot chocolate. Our next stop was a small stone-built museum about the Alpine environment, and we had lunch outside, watching and waiting for marmots on the nearby grassy slopes. After a seemingly long wait, we spotted a couple of them, some distance away.

It was then onwards and upwards to the Col de Seigne (2516m) and the French border, where a fellow walker checked my passport before they allowed me across the imaginary line.

A few of us made a later start today, after helping to clear up following breakfast and pack the van. We intended to catch the others up at the Refuge du Col de la Croix du Bonhomme, and managed to do this although it was an uphill struggle (and I had to lie down for a while at the refuge for a while to recover). We left the refuge after coffee and cake, and continued upwards then enjoyed a bimble through a variety of volcanic rocks including grippy gabbro, before reaching Tete Nord des Fours. 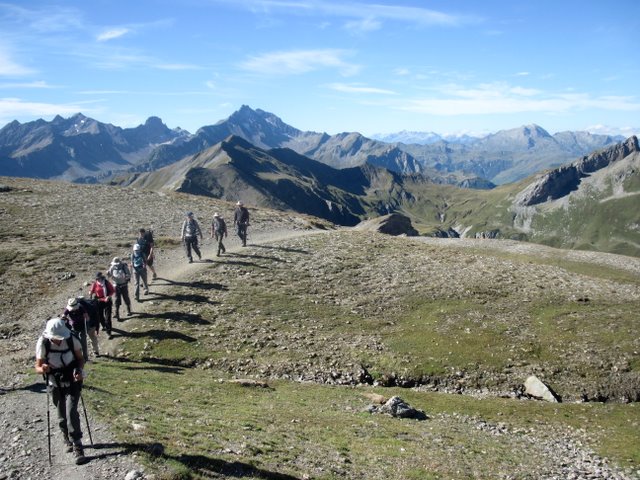 There, we enjoyed brilliant views across to the Mont Blanc massif straight ahead, and down to the Reserve Naturelle des Contamines-Montjoie to the north, and Gran Paradiso (I think) to the east. After posing for photographs, we headed down to the Col du Bonhomme and then down into the green valley, eventually reaching the very pleasant Refuge de Nant Borrant where we drank cider from bowls. It was then a short walk, past La Gorge, to the campsite south of Les Contamines.

We walked through Les Contamines, past some rustic cottages, then up into some woodland before emerging above the trees. We continued climbing until we reached Chalets de Miage where we had a break. It was then an exhausting race (only for the more competitive amongst us) up to the Col de Tricot. After lunch several of us went up Mont Vorassay, to benefit from more extensive views.

We then started the descent, passing close to the snout of the Glacier de Bionnassay, and then across a shaky suspension bridge (very sensibly, one at a time). The last part of the descent from Col de Voza down a zigzagging road seemed to last forever. We eventually reached our target bar though, where we recovered with beers before catching a bus to the camp site.

We zigzagged up a forest track, passing an animal park on the way (where we had our only ibex sighting of the trip) and were soon high above Chamonix. 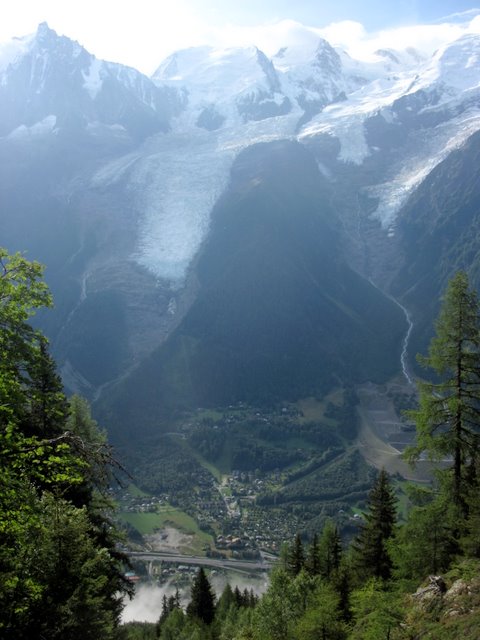 Within an hour we had reached the Refuge de Bel Lachat, which had a terrace overlooking the valley. It was then a rocky ridge that we followed up to Brevent, and then down a steep, wide track, overlooked by tall cliffs. Some of the group then descended on the telepherique, whilst a number of us contoured around on the Grand Balcon Sud to eventually reach La Flegere. Tour du Mont Blanc completed! We celebrated in Le Pub in Chamonix.

The tour was rounded off nicely with a trip up to the Aiguille du Midi on the cable car, where there were amazing views down to the Vallee Blanche and the Geant Glacier.... ... and of course, I had to have a Mont Blanc beer later in the day, to celebrate such a great fortnight of walking around the iconic mountain. 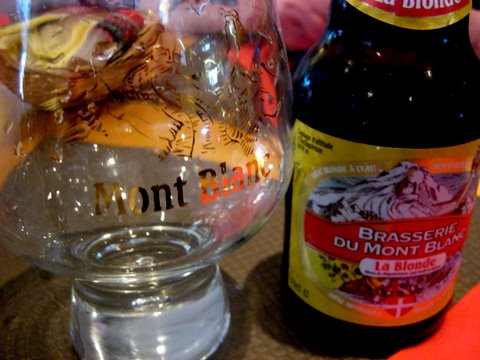 Incredible set of reports Tom, the mountains look stunning in your photos.
It must have been a very memorable fortnight.

Breath taking! This is one of our dream vacations. What an amazing trip...thanks for posting this!!!

Enjoyed that.
You never mentioned how you did it? With a guided tour party/planned it yourself/carried all your gear? Etc.

Thanks all! It was a great trip as you can tell - highly recommended.

Mountainstar - The trip was organised by Exodus (link below) and it was a 'supported camping' tour - we camped each night, and our luggage and tents were taken by van to each campsite whilst we were walking during the day. Much easier than having to lug big rucksacks over the mountains! Dinners were cooked for us at the campsite or taken at local restaurants. The only drawback with camping was the big descents each afternoon, down to the campsites in the valleys. It would have been great to stay overnight in the mountain huts, but for some reason Exodus don't do hut trips. I'd still highly recommend going with Exodus though - was very well organised and well led.

Thanks for the information on the tour provider as I am thinking of organising a trip next year to Mont Blanc (before i get too old!) so will have a look at the website and see what they can do! Great report and pictures! Gary.