An Teallach – a new route up and down

An Teallach – a new route up and down


For years I have simply loved the name – An Teallach. So when my friend Lee asked me if I fancied climbing it, I agreed to it straight away. The drive up to Ullapool was rather exciting, as we nearly managed to run out of petrol, and I had images in my head of camping right next to the road in the middle of nowhere-hilarious! Well who could have guessed that petrol stations are closed by 20:00h up there! Luckily a detour to Dingwell saved us and we managed to arrive in Ullapool around 21:30.

The night was challenging, as strong gusty gale force winds can make a hell of a noise, especially when you are in a tent and the noise kept me awake for most of the night (perfect conditions for hillwalking the next day)

. Getting up the next morning after a few short hours of interrupted sleep was hard going, but porridge, coffee and a hot shower did work wonders. 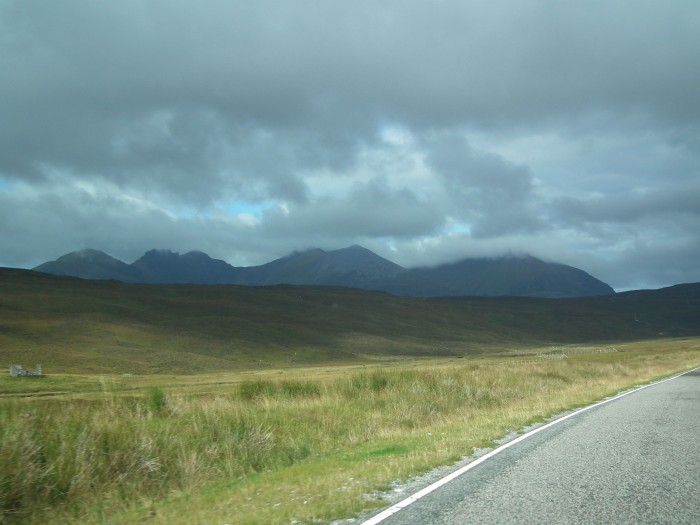 An Teallach from the road...its huge!

Starting point:
We finally arrived at the car park close to Corrie Hallie and set off at 10:30. With 4 guidebooks, and 2 maps between us we were well equipped and set off with one guidebook and 2 maps. The starting point was 400m down the road, through some trees and up to the open moorland along an easy to follow path up the burn Coir’ a’ Ghiubhsachain. It was an obvious path to follow along the burn, so we put the guidebooks away and carried on towards to the mountain. What we didn’t realized at the time was, that we followed the wrong path to the left, which lead us towards Sail Liath (book said to walk up path to the right towards Glas Mheall Liath)
Well I have to admit that I didn’t really pay attention to the book and the path description…after all a clear path towards the mountain you want to climb, does not leave any doubt.

Along the way and up the gully to Sail Liath:
The path along the valley was lovely and a nice hike towards An Teallach. To our left we had a natural wall of rocks leading all the way towards the mountain and the path was great at times. 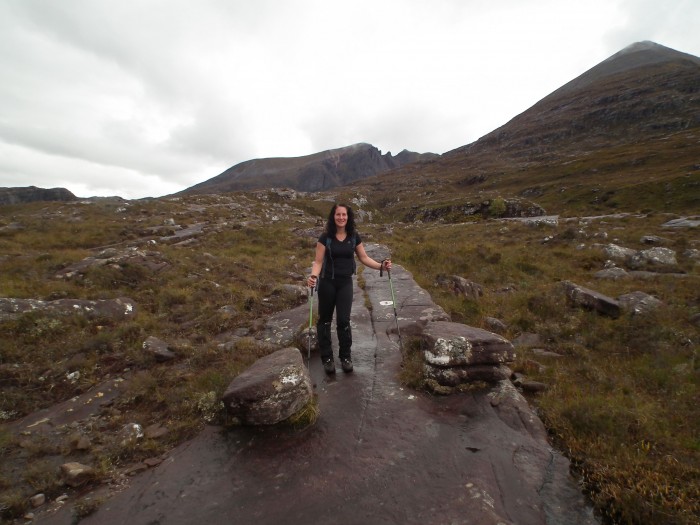 We came to a bit where a river crossing was required, but as the water was shallow so it was pretty easy to cross. We reached the the bottom of Sail Liath about 1.5h after setting off from the car and by that time the path continued towards Loch toil an Lochain.

I think by that time we became rather confused. After all we had to go up and not walk to the loch. By that time we checked the map and realized our mistake. Reading the map and looking up the cliffs, I spotted a very faint path* up a gully, which looked like gullies I have scrambled up before hand. Easy! Convincing Lee to go up the gully was a wee bit harder, but he finally agreed to go up with me.
*The faith path was maybe used by some mad deer in the past, but definitely not by any walkers! 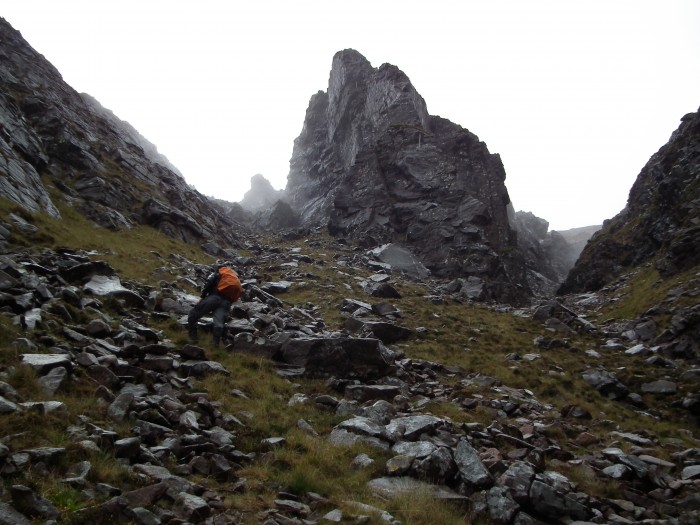 Half way up 'Blueberry Gully' 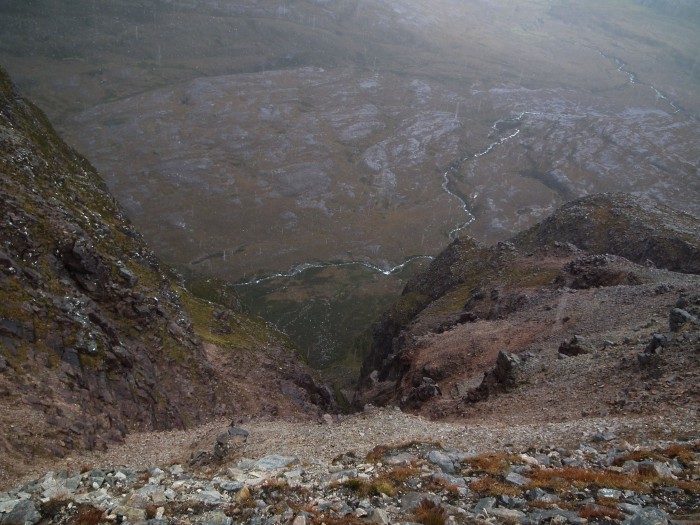 The gully was a really steep climb. The first part was a mix between big boulders, grass, heather and blueberry bushes. Taking my time I walked up and picked blueberries on the way (biggest ones I have found this year)…distraction when doing something hard is the best thing! About half way up the path became even steeper and consisted only of rocks and grass. By that time it started to rain, but I was sweating buckets anyway so it didn’t bother me. The last 1/3 of the gully involved a lot of scrambling over rocks and had some sections of small loose rocks, which all started to move downhill while I tried to walk uphill ( walking steadily and slowly is the way to overcome these) But all in all great fun.

By that time I have chosen a different route from Lee, as his ascent send a few stone flying down my way, so it made sense to keep away. The left route up the gully seemed to be the easier one, while the right side involved more scrambling and loose rocks…I enjoyed that part, but I should really recommend the left hand site up

We reached the top of the gully and from there you have to follow a boulder field up to top of Sail Liath. I didn’t check the time but from the bottom of the valley to the top of Sail Liath, I guess you need to calculate between 1 – 1.5h (with breaks)
When we had lunch and compared our experiences up the gully (Great fun) to (That’s the hardest I have done so far), we looked towards the peaks we still had to climb…incredible!!! 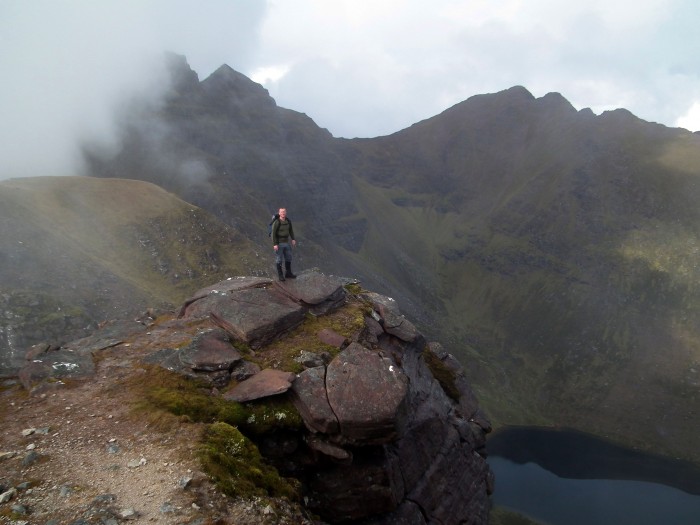 Looking towards whats yet to come 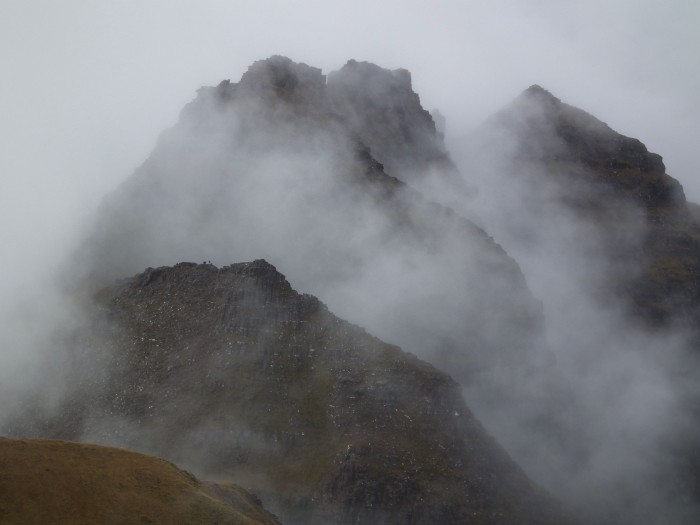 Can you spot the people????

Towards Sgurr Fiona:
As the gully took us longer than expected and left Lee a wee bit shaken, he didn’t wanted to do the scrambling part ahead, so we decided to follow the path around the worst parts. It was a good idea at the time, as it started to rain and left us with no visibility at that part of the way anyway. The path was really easy and we managed to make it in good time.

It was very dramatic with the clouds

The walk down is longer than you can imagine from the top. The first 1/3 of the hill is covered by loose boulders and walking down the boulders which felt like hours was no fun at all. When we reached the end of the boulder field the heavens opened, standing under a shower at home, while being fully dressed, would not have made any different. The visibility was reduced to 15m and within 10 min the mountain slope was transformed to a river…I have never seen anything like it! Because the slope consists of lots of terraces the water just poured down them and walking down at the same time was a challenge. I was really glad at that time that I had my walking poles. Walking down the terraces was sometimes impossible, so you had to slide down most of them…they are not long…but it takes ages (also due to the soggy ground) and it gets frustrating as hell. As Lee pointed out horrible is far to nice…it was f….ing horrible.

By the time we reached the burn at the bottom of the valley, it finally stopped raining, but the crossing of the burn proved a bit more challenging. 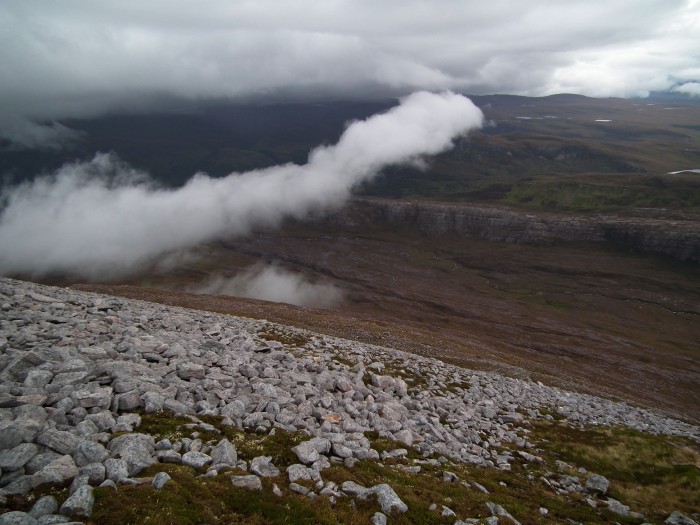 The boulder field with the rain clouds coming in

The nice wee stream turned into a monster and walking along it, is was difficult to find a save bit to cross. The crossing had to be done in knee deep water and yet again I was glad I had my poles, as the current was very strong. After 8.30h we finally came to the path we followed up the hill and were back at the car 9h after setting off. interested to know is your gully the one to left on this photo ? It isnt that one it was even further to the left-before you reached the loch just below Sail Liath...your gully looks like the one below Cadha Gobhlach.

Mountainlove wrote:It isnt that one it was even further to the left-before you reached the loch just below Sail Liath...your gully looks like the one below Cadha Gobhlach.

Cheers - your gully does look a bit narrower in the photos

Sounds like you had a challenging day but that "Can you spot the people?" photo is epic.

Really good photos - ghostly would be the word I would use. I did An Teallach in August 2006 and got a rotten day just like you. It was too risky to do the ridge but I will get back there and do it one day.

Excellent report! Some amazing pictures too. I think id prefer to leave this one for a good day, looks like an epic otherwise!

My mate is off to do this at the end of the month. Jealous is too nice to describe how I feel, f***ing jealous

nice report and pics ml, done an teallach a few weeks ago from shenevall going over the pinnicles with quite a heavy pack ( challenging ) bottled out of sitting on lord berkeleys seat. we met an old guy on bidein a ghlas thuill who swore by your descent route, we declined and went down via coire a ghlas thuill. good luck with your route finding next trip

Cracking report - shame you didn't get the weather for such a wonderful hill. I wandered past the foot of this hill en route to do the Deargs from Shenevall on a glorious day this year and the ridge looked amazing. Unfortunately the only time I did An Teallach I had miserable weather and decided against attempting the full ridge. Don't like the look of that gully - scary !!!

PS - Glenmore Lodge does a good map & compass reading courses - may be worth checking out ?

Nice report Mountainlove. You should change your name to pathfinder or trailblazer

Not sure thats a route I would have chosen but top effort.

If you'd have carried on towards the lochain there's a faint path that leads up to the ridge between Gobhlach and Liath. It's steep but a lot easier than the route you chose. Still, it probably made a nice change

@JOHNGG ...I guess I should -eventually...saying that...I can maybe write a book about alternative routes up
Munros at some point

@mgmt! Cant believe someone actually likes that route!
@ Bonzo: Good to know for the next time!

All: Many thanks for your comment...the Youtube video is also available now (see above)

Another great report mountainlove, and some top class photos in there too.