We did this walk on the 8th of July 2008 (when our legs had rested for two days after having ascended the Saddle). To be true, at that day we climbed Bruach na Frithe for the second time. The reason was not that there had been bad weather at the first time. No, we had just been so overwhelmed then that we were eager to enjoy the views again.

But now for the 8th of July: When we were getting ready for walk-off at the car park a bus load of people from Czech Republic passed by. Despite their lack of sound English knowledge we soon found out that they also wanted to climb Bruach na Frithe. Therefore we were not all alone that day. When they rested a bit before crossing the Allt Dearg Mor we overtook them and tested our route finding skills on the way up to Bealach nan Lice. This test wasn't too hard, whereas the steep scree finish leading to the Bealach na Lice made us sweat quite a lot.

When we reached the bealach after nearly three hours we had company again: A couple with a dog (which was carried for a good part of the scree path) arrived there, and the first czech people started to whizz around us. When we were tackling one of the crags on the way to Bruach na Frithe they literally flooded us. (Before you get a wrong impression of me: I would have written the same, if the people in the bus had been German.)

On the summit we took much time to enjoy the views, have our lunch and wait for peaceful times. In the meantime a Dutch guy had arrived. We chatted with him and when he saw our route description he noticed at once that it was taken from walkhighlands.co.uk. He had downloaded the complete website onto his laptop and used the GPS data now. While we were enjoying the panorama I mentioned that Bla Beinn is also an excellent walk. He asked "How many shoes does he have?" I must have looked rather confused when trying to get what he meant with that question. But then I found out that he meant the grade of the walk which is represented by a number of walking boots. Yes, you're right, sometimes I'm a little slow... 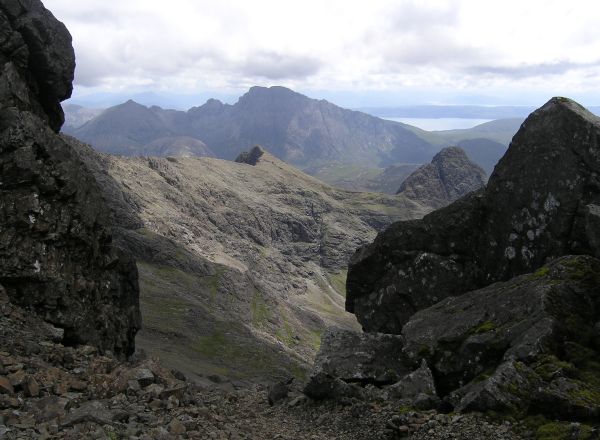 In the meantime the crowd had left the summit and it was time for pictures. Therefore we could have a closer look at that strange triangulation pillar 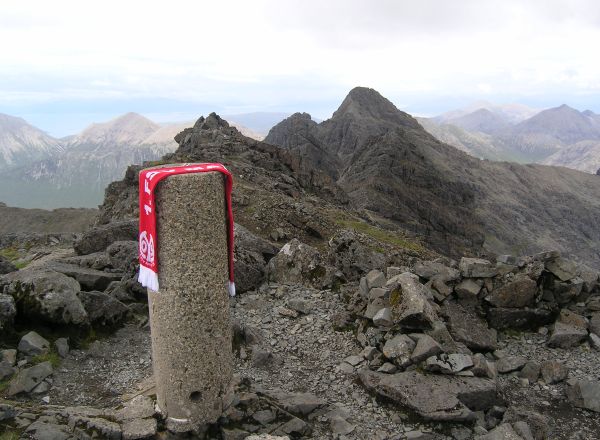 that nice little volcano within the red Cuillin 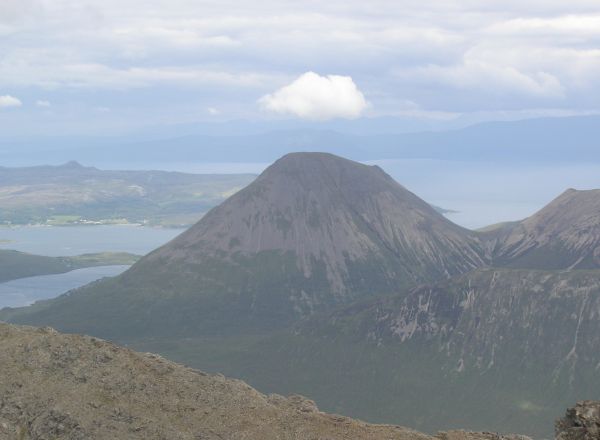 and the classic view of the whole Cuillin ridge. 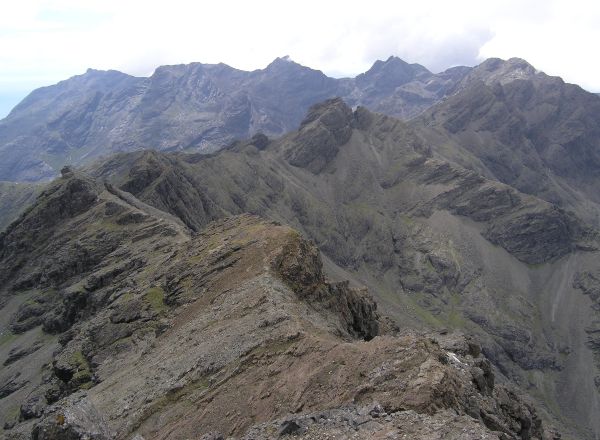 After that we walked down Fionn Choire again, but then took a different route down: We crossed the bealach between Sgurr a Basteir and Meall Odhar and walked down the mostly grassy slopes at the other side. When we reached the path along Allt Dearg Beag I couldn't resist to have a look at the Basteir Gorge. Well, rather impressive... Then it was time to head back to the car park. The last obstacle was the bridge crossing the Allt Derag Mor. Or better: the remains of it. In the news section of walkhighlands someone was of the opinion that the bridge was still usable although it was collapsed. Well, that's surely good fun. Time enough, I think, for a piece of wood: 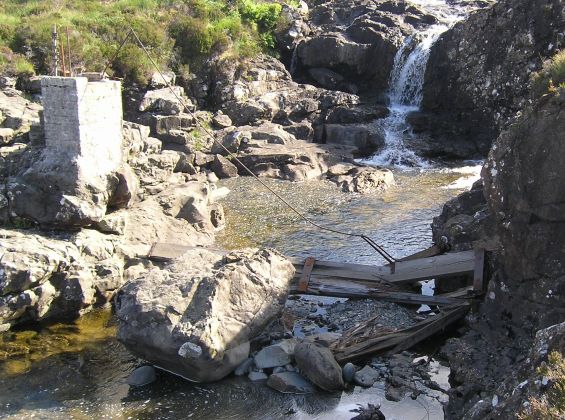 Got two more fisheye pictures from Nadine. Here they are: 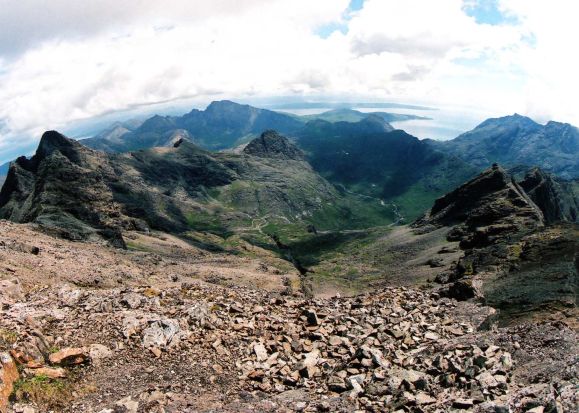 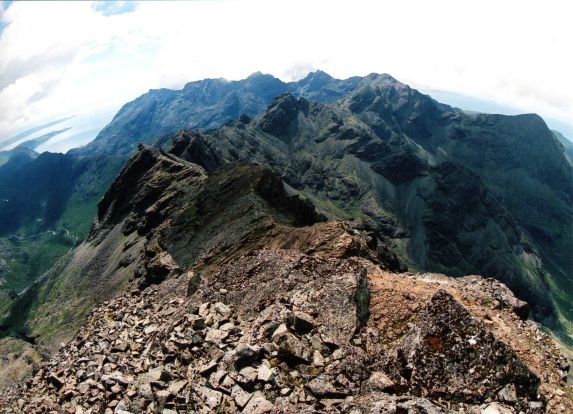 very good and amusing trip report dirk and good photos..like that last one!!
and the starnge triangulation pillar

Love the photos, Dirk, especially the fisheye ones. Gives a whole new perspective, and somehow makes the ridge look a little less daunting!!!

Since rediscovering Skye in 2005, I have been up Bruach na Frithe a couple of times via the route described - it is a good description but people might wish to know about the spring at 820m in the upper reaches of Fionn Choire. As a fairly sensible solo walker, this walk has it all for me - not too difficult to navigate in poor visibility but with good 'diversions' (eg Sgurr a Bhasteir and Sgurr a' Fionn Choire) when conditions are good - and spectacular views wherever one looks. Just a suggestion but as you head up to the head of the corrie where it's mainly rubbish underfoot, try bearing left up the steeper slope (but better underfoot) to the start of the ridge running out to the north to Sgurr a Bhasteir - and it gives you the option of getting the best view of Pinnacle Ridge on Sgurr nan Gillean. A really good day out.