In Feb 08 I went with one of my walking groups (as in groups I walk with – not lead!) to the Glen More Youth Hostel near Aviemore. The day before the trip I’d just come out of hospital with an asthma attack but, being a Yorkshire person, I’d paid so I was going!

Anyway I needed the practice at winter walking and the Cairngorms is my favourite place for that...

I was a bit disturbed that, although we were only doing Beinn MacDuibh (which I class as an easy stroll), we were to set off well before daylight – something like 0800! I thought that was a really bad idea as the extra-cold air at that time of day was likely to cause my chest fresh problems.

About 10 of us set off from the Sugarbowl carpark just as it was thinking of being light but well before the sun hit to warm us up. I placed myself at the back of the group with a lady of around my age as I thought I would be really slow and had to be careful about my chest. We set off up the ski area on the east side of the Fiacaill a Choire Chais ridge towards the snowline which was about half way up. Just short of the snowline I found I was going really well and my chest was being no bother at all so I speeded up.

We had to cross a large snowfield up the steep side of the ridge to get onto the ridge proper. The snow was very hard-frozen and possibly we should have donned crampons but no-one else did so I just had my ice axe at the ready in case I slipped – after all, you’d look pretty stupid skiing on your face back down the slope!

By the time we reached the ridge proper, I was only 3rd in line in the group so had really speeded up. We soon reached the top of the ridge where the group decided to have a good, long break (so we could get really cold! – I never stop for more than a minute or so in winter unless it’s really sunny and warm). 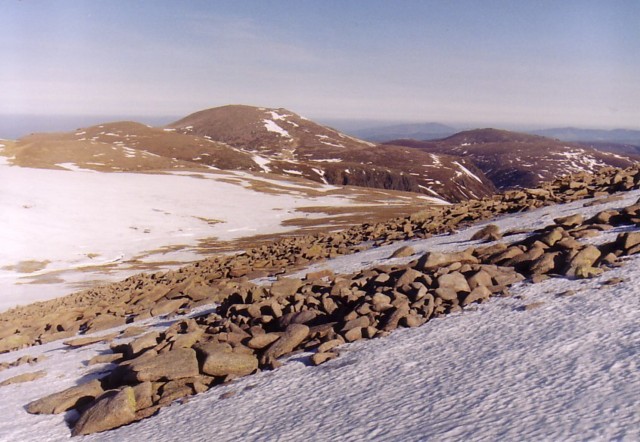 We then strode off along the escarpment, stopping here and there to look at ice climbers coming up the various gullies – there were hundreds of them (ice climbing parties – not gullies!) It was really good going along the plateau edge and we made good time to the col above Coire Domhain. We then had to traverse up the flank of Cairn Lochan to the saddle before the final climb to Beinn MacDuibh. We all cramponed up for this traverse – this was when you found out who had worn crampons before and who were the newbies! One guy laced his completely wrong, which we noticed just as we set off, so we had to stop and show him how it was done. I always thought it was reasonably obvious myself but no harm done anyway. There were several cross country skiers having a whale of a time in the corrie and across our slope – made me feel like giving it a try sometime.

The steady climb up to Beinn MacDuibh started. At this point we realised we’d lost the black lab which had come with one of the guys in the party... we scanned all the horizons and eventually saw him heading off up Cairn Lochan with another party – completely the opposite direction. His owner shouted and whistled to no effect. The whole group shouted and eventually the dog heard and decided ‘ah yeah – that’s my party, not these guys!’ and came back. He didn’t look at all sheepish. There were excellent views of the Braigh Riabhach range from the climb so I took several pictures and one straight into the sun towards MacDuibh. The errant hound who didn't recognise his owner or group! or maybe he just found us boring! It was finally warm and sunny on the summit so even I didn’t mind sitting there for quite a while looking in all directions at the superb views – but mainly towards the Braemar area as that is probably my favourite area of Scotland and could see the many Munros I’d done from there.

We finally left the sunny summit and descended back to the saddle where we all decided to pick off the top of Cairn Lochan. That was a very easy climb and the snow was softer as the slope was south facing so we’d all de-cramponed. There were quite a few very long and icy stretches where standing water on the level part of the ridge had frozen but, as it was flat, we just skidded across them.

While the others had another long break at the summit, I went to look down the Fiacall Ridge which I was thinking of having a go at sometime. There were yet more ice-climbers coming up the gully from Coire an Lochan – quite some crags there! The others decided they were going to hang around quite a while there in the sun and then go back the way they came whereas I felt like quite a bit more walking so set off west round Coire an Lochan to go and do Creag an Leth-Choin (Lurcher’s Crag). There was very little snow left on that side of the mountain (strangely as it’s the north side) so I made fast progress and was soon stood on Lurcher’s marvelling at the Lairig Ghru. I had a short break in the sun and then set off down the north ridge towards the Chalamain Gap. I decided not to descend the very steep but short scree into the gap but headed northeast until I found an easy way down to the track. There was a small party of guys just coming through the gap and clambering about on the icy boulders.

I decided not to go back to the Sugarbowl carpark to get a lift back with the others but just to set off walking back to the hostel. There was a really lovely path by the river through a small glen. Where it crossed the road I decided just to stick to the road (I wasn’t sure whether the track across the road went back to the hostel/Glenmore Lodge etc. or not). Just as I set off down the road, a car stopped for me – it was some of our group – very convenient. A great day and good winter walking practice for us all.

It would be especially useful to anyone doing it in the snow!

Well to be honest, when the attack goes, I'm better and it won't return until at least another year... it's always difficult convincing the hospital to let you out though!

Great pics there MC, nice to see a bit more of what I couldn't see up high in that area last weekend!

I can't wait to do some winter walking....maybe next year! I shall however, find some low(ish)/safe places to get out in the snow this year I think, perhaps admire the high peaks from the safety of a nearby forest or something

Well, as a mountain coward, I find just about the whole of the Cairngorms non-threatening for winter walking (apart from if you get a white-out of course) - the slopes are pretty gentle compared to a lot of Scotland and there are no narrow ridges whatsoever. I also have a theory for the main Cairngorm plateau that all the crags are right at the escarpment edge and not lower down so, if you're a bit lost in mist and you find a normal slope going down (as opposed to steep), you can probably get all the way down there and sort out where you are later. Obviously you'd need a vague idea of what compass direction you need to get back to the area you started out from!

. One of my definite top 5 walks, especially in the winter.