BEEP, BEEP, BEEP, BEEP, - eyes open arms out stretch to smash, throw or just turn off the alarm- big stretch and yawn – down stairs – need coffee now – put boots on, spread toothpaste over face – AWAKE – outside, see stars (good sign?) get in car and smile – another day in the mountains is about to start.

Today’s outing boys and girls is to the obscure and rarely visited heights of Ben Avon a natural wonderland comprising of a wide plateau dotted with tops and peaks of exposed granite blocks, home to numerous birds and grouse, and hordes of hares plus golden eagles and herds of wild deer. Roughly 25 miles of joy starting from that illustrious town of Tomintoul over gravel and tarmac to the Linn of Avon and up, up ,up the smooth slopes to the mysterious and windswept peaks of Ben Avon – GPX file as always is attached.

Even after a few cups of coffee, my brain was still having a hard time of realizing that the eyes were open, it was just about managing the hundreds of signals needed to drive. the narrow bendy road to Tomintoul didn’t help ,much but luckily body and mind arrived at the car park beyond Tomintoul by the queens view in one piece. the only casualty being a wet passenger seat where I split some coffee – and also later finding out I’d forgotten money meaning there would be no bacon roll in the tea rooms after the trip.

Now probably gonna be condemned for this next bit of laziness but I did use a combo of foot and pedal for this trip. Ye I do feel I’ve let the side down in some way but then again after years of slogging endlessly through high wilderness in snow, high winds, through deep heather and over ragging rivers. I feel a short 8 miles (or 16 both ways) road trip is not only necessary to gain access to these hills but also a good way to wake the sluggish brain especially when your cycling against a strong wind up and down low rises!

Lord knows when the road was built, but I reckon that the hundreds of farmers and their families who used to live here (might see some of their ruined crofts on top and in various local glens) would of appreciated it a lot more to transport their live stock and peat. No perhaps not, it would of also meant the law would have had better access to stop all that illicit distillering – and where would we be if these thousands of pre-excise distillers hadn’t had time to practice their art before they had to start paying tax.

For now through riding down a smooth road without the distraction of any fuming coughing vehicles allows one to drift from side to side while daydreaming looking up at the high ridges looking for god knows what, perhaps giants of Scottish lore! Any way the sun was just coming up, the cloud once big and black was changing to softer tones, and fluffier like that candyfloss behind which was a dark blue sky and the merry tones of that song from butch Cassidy and the Sundance kid came to mind. But your be relieved that I didn’t sing it out loud – didn’t want to provoke and providence.

Pass the old bothy at Dalestie you turn into what could be described as the barrel, a 1 to 2 mile straight stretch along which smooth scree and heather slopes glide down one side and up another. It is along this stretch where wife’s and perhaps mistresses used to collect by an outcrop just above the bothy on the other side of the river. Apparently, two seats were carved into this rock and when sat on, a pain free labour and birth was guaranteed – something I think my wife and my jaw would have appreciated.

So after Inchrory you turn towards Linn of Avon, take the track on the left from the main one just before the wooden gate. I managed to take my bike quite a fair distance up here until just under Meall Gaineimh where the track stopped right next to a line of small stone walls ascending up to the out crop – which I could only assume are grouse butts or deer. Whatever, at least they were not being used this day last thing I need is buckshot up my ass!

The path to the big brae is very good taking you through some weird stone formations positioned on all the tops here. Passed this point it is sort of make your own way time but luckily the ground is firm with stone just under the surface and I encountered very little of those boggy bits normally encountered on flats and gentle slopes.
The views, well toward north they were great, hazy but great where as behind me and towards the cairngorms those dark clouds still issued fading into the fluffy sort over the low ground in front. The sun shone now and again visibly outlining the cloud on these low hills as the strong wind blew them across – it was a fantastic sight really seeing the odd patch of outcrop or hill bright against the darker tones created by the cloud – almost magical really like a chess board moving across the landscape before me.

As for this wildlife, I was on about. Saw loads of hares all the time, some only coming out of hiding when I was a mere few feet from them, this was the same for the grouse as well and one very huge golden eagle. All I heard was a loud thump as it spread its wings on a block of granite beside and above me raised up and after a quick look at me was away down into the corries – quite a fantastic sight up close like seeing the under carriage of a tornado up close (happened once in torridon). But that wasn’t the only great sighting today, more like a great hearing really when I heard the strange strangled almost coarse sound of red deer rutting – no and again I would hear it but unfortunately my only glimpse of them was from afar.
There might not be any great ridges and all that other stuff which attracts all the hikers to other areas, but due to its rare visits by us humans, I do think it feels wilder. Not just because of the increased wildlife sightings but the lack of paths helps. I only saw one other set of footprints, there was no little holes made by walking sticks, nor scrapes on the rocks from crampons – it was a place I felt you could camp for ages and not see a soul. Hundreds of people pass by it in the glens below to the cairngorms or towards Breamar but few probably get to see these mountains true worth.

Surprising really considering it only took me four hours to get to the top from Tomintoul, and with the wind with me on the way back, only 2 ½. Just a shame I forgot the money and couldn’t end a great day with a mouth-watering bacon roll. Such is life! 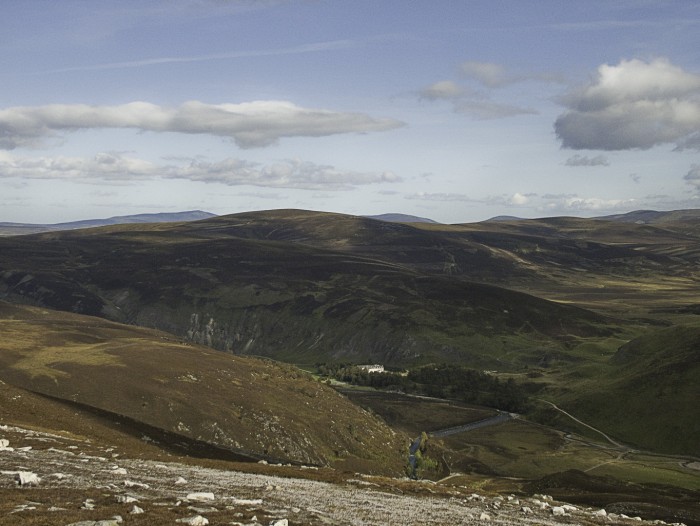 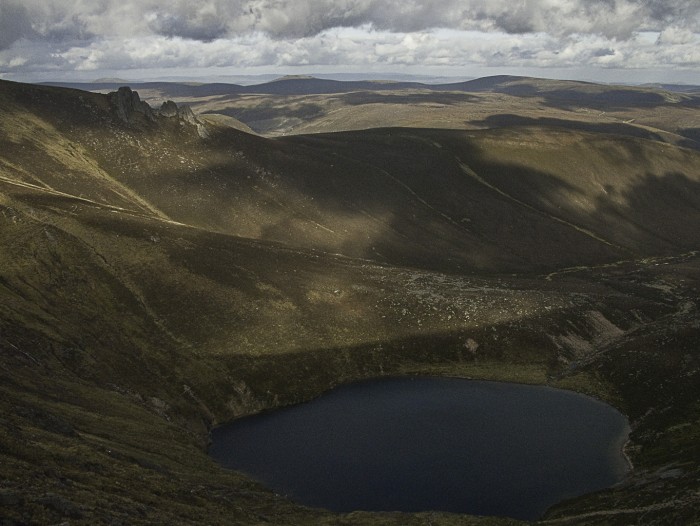 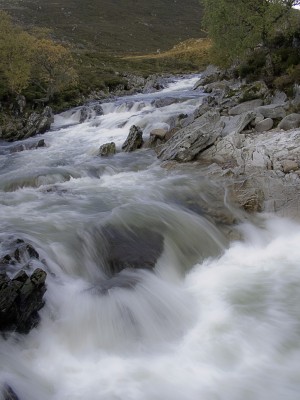 Waterfall in the linn of avon

Panoramic towards Elgin from the ben


Ben Avon.gpx Open full screen  NB: Walkhighlands is not responsible for the accuracy of gpx files in users posts

Went for an explore of Glen Avon on my MTB the other month and hardly meet a soul - and also saw my first adder. Quite fancy tackling Ben Avon this way seeing as this is one of the few Cairngorms where I got clagged in. If you went on to the Ponymen's Hut further up the glen you could also include Beinn a' Bhuird (though it would be a long day).

Certainly a great way to explore Ben Avon - those tors and the plateau could keep me occupied for days.

I really fancy that approach to get up Beinn a Bhuird from the N.

I was quite surprised how little this place seemed visited by us humans - hardly any foot prints and as stated the most wildlife I've seen in one day - as for mtb, I did try for ben macdui from tomintoul on my bike but wimped out at the ford (see photo in ben macdui report) but once on top of this plateau, the firm ground would make for good cycling.

dunno why I did not go all the way to Beinn a' Bhuird, but it did have a really dark cloud over it - bad excuse or what!! 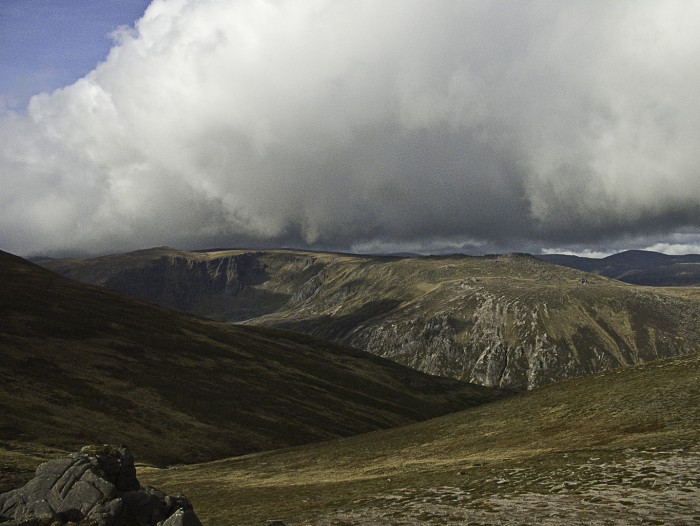 I have always heard Ben Avon was a relativly difficult mountain to climb my Dad made it sound like Scotlands Everest.

Would you say it was realitivly difficult?

Hi Taylor - can't really vouch for the approach from breamar, which is shorter and probably the more common route. For the tomintoul approach is does involve along day - i.e over 24 miles, 16 of it is rellatively flat to linn of avon, the remainder is up, not what I'd call a steep slope, quite leasurly like upto cairngorms or tourist route to ben nevis - it does involve stages of steep and not so steep so you do kind of get rest bits and as you come into the plateau it is a fairly easy ascent to tops - there are few or no paths on top so you can make it as easy or differcult as you want.

Thanks for the clear up. Might head over to Ben Avon sometime soon.

Great report and pics Paul and a good long trek/ride