Bitten by the bug - Lochnagar

Bitten by the bug - Lochnagar


Hello again everyone! I was really looking forward to getting out again after Mayar and Dreish on Tuesday and was happy to find the weather looked good again for today (Thursday) at Lochnagar. On arrival to the Glen Muick car park I was suprised to find that I was the only one there! My original plan was to tackle all five Munros on the White Mounth route on the same trip and after setting off at around 8.30am in the mist I was still feeling quite optimistic. The ascent was pretty uneventful apart from the cold the low cloud and the occasional sound of rutting Deer. Meikle Pap through the Cloud

I felt a bit disorientated with the poor visibility the cloud brought, losing the track didn't seem to help! It felt like I had been ascending and contouring round past the cliffs on the ascent forever until I finally found a foot print on track that led me to Cac Carn Mor. Cliffs on the ascent

By this point I had decided against completing the five Munro circuit and stopped for something to eat and to plan a new route down. The shorter route followed Glas Allt down to Loch Muick.
I reached the summit at around 11.30, and with no views to enjoy, didn't stay for long. 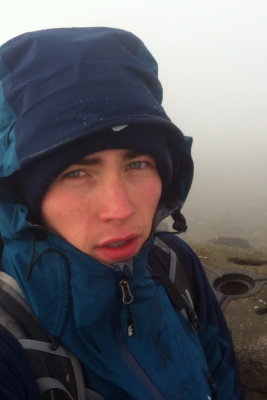 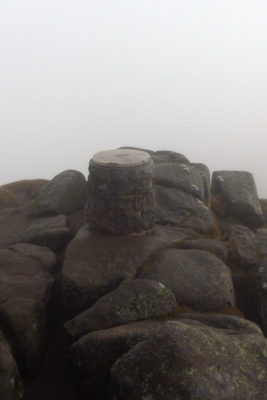 On my way back down I bumped into two other climbers, I wasn't alone! Eric and Max, as I soon found out were descending on the same route, I was happy to be welcomed along with them and for the rest of the descent I had some company.
We stopped at the magnificent Glas Allt waterfall on the way down for a second lunch

and with warmth back in my face and hands we descended down to Loch Muick. 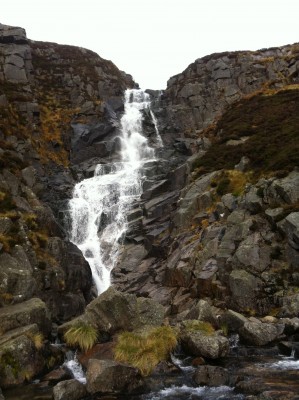 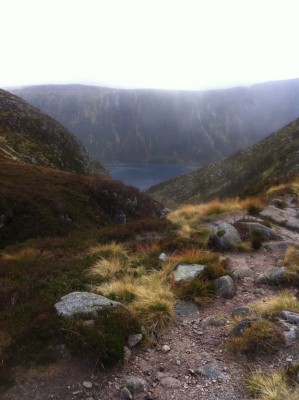 Looking down to Glen Muick We arrived back at the Car park at about 3pm, a bit later than I expected, but after the unexpected turn the day had taken I was relieved to be back. Promised I would mention my new found friends in my report and hoping to get out again with them soon!

I've truly been bitten by the bug!

Good effort Andy, Lochnagar is a beast on its own. I've been threatening to do the 5 for a while now and still haven't

I did Lochnagar and loved it, Broad Cairn too, so now I'm stuck with the 3 in the middle

Well done Andy, that's a great walk and you'll do it again one day and have time to climb Meikle Pap in clear weather and see the magnificent Corrie from there. Well worth it!

Bet you welcomed the company as you descended the mountain.

Just a shame you never got the views. You sound like you are local to the area,if so there should be no problem if you decide on climbing the route again.

Well done Andy, shame about the weather but I'm sure you will be back up there at the first opportunity. It is a group of Munros that I have been wanting to get done as well, so hopefully if we get anything that resembles a decent summer next year I will be heading up there for an overnighter with my bivvy bag, maybe even sooner if we get good spring weather.

Nice report Andy, shame about your weather. I did the five Munro's around Loch Muick earlier this year (like yourself after previous outings to Mount Keen, Mayar and Driesh) and was also 'bitten by the bug' that you seem to have caught. Good luck on your Kilimanjaro adventure.