SPOILER ALERT: didn't do both Munros.

MWIS forecasted snow on hills and I had seen it on Ben Lomond yesterday. Didn't look too bad when I drove past but got thicker on hills further North, Ben More especially. First time in snow so I was a bit cautious about trying it, but it would probably just be a light powder, right? 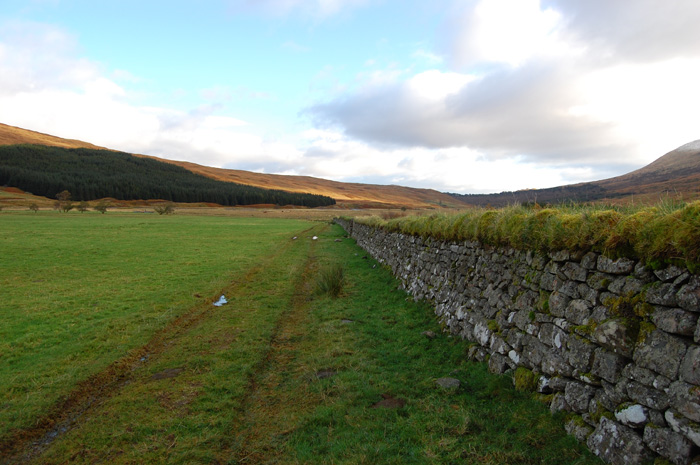 Burn crossing wasn't too bad after 5mins choosing a route. 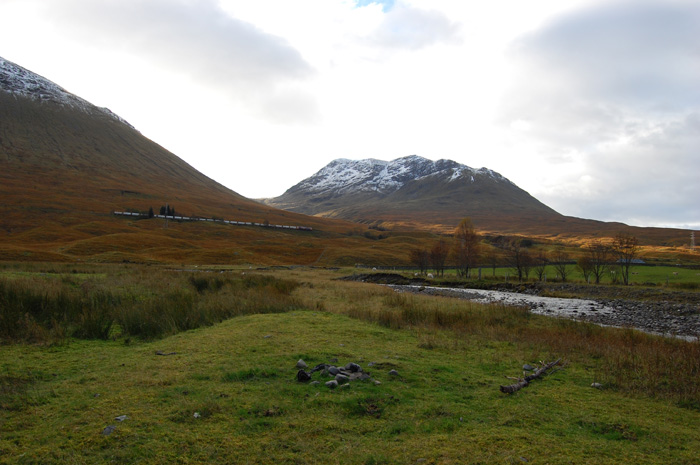 Nice day for a stroll. 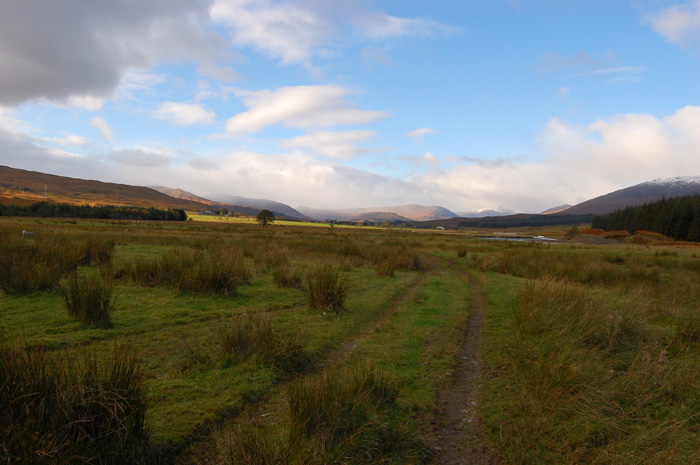 Over bridge at derelict farm. Then over footbridge, I missed this & had to go back. 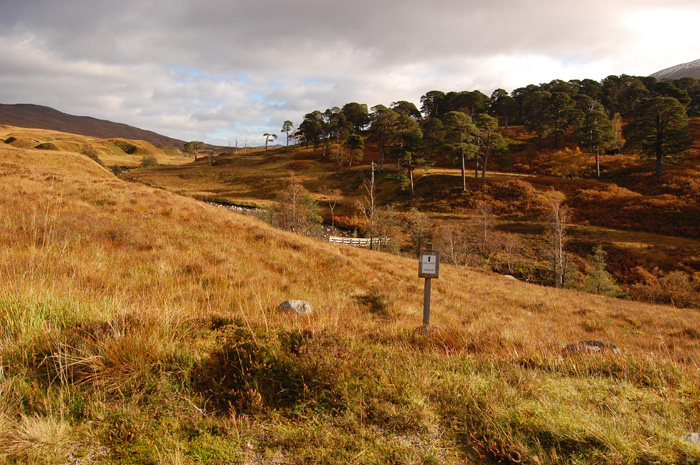 through edge of forest, then head for the left of fenced area, bit muddy. Beinn Achaladair: 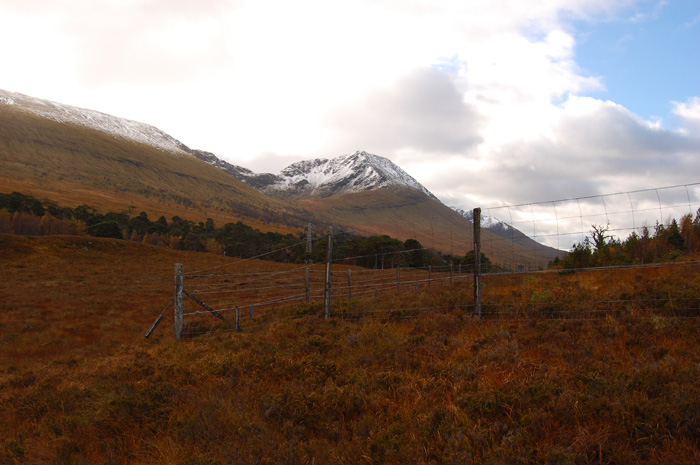 Look out for this pole from edge of fenced wood, leads to railway underpass. 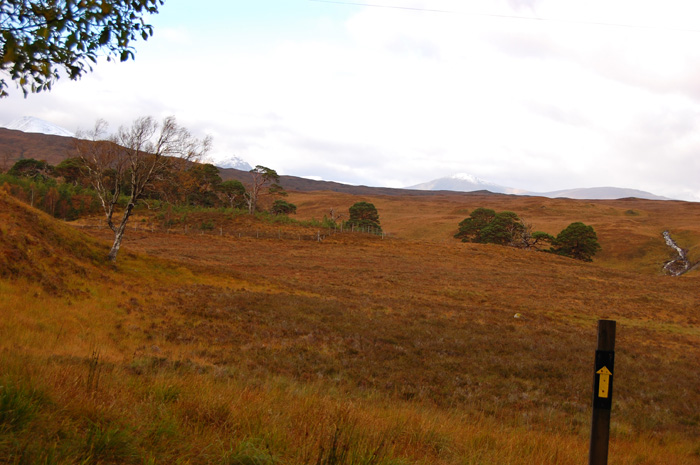 Then it's upwards along side of burn - doesn't look too bad up there, hmm... 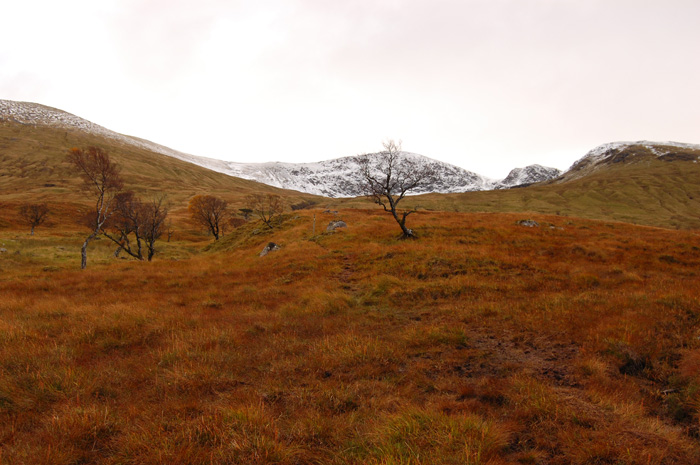 Views on way up: 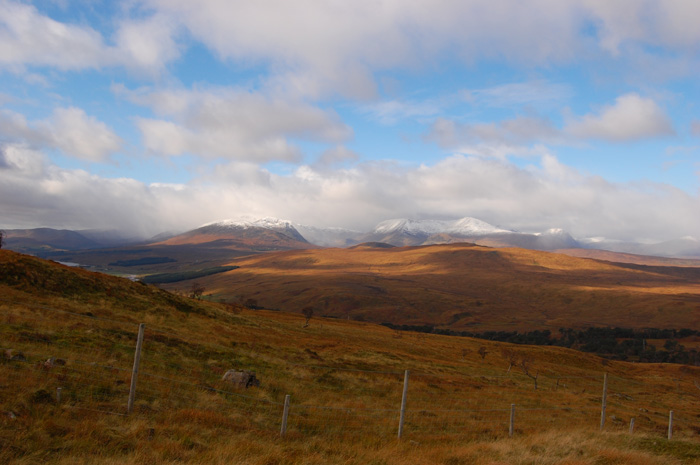 Today's route along the ridge, starting to look a bit daunting but plan was to turn back if things got dodgy. 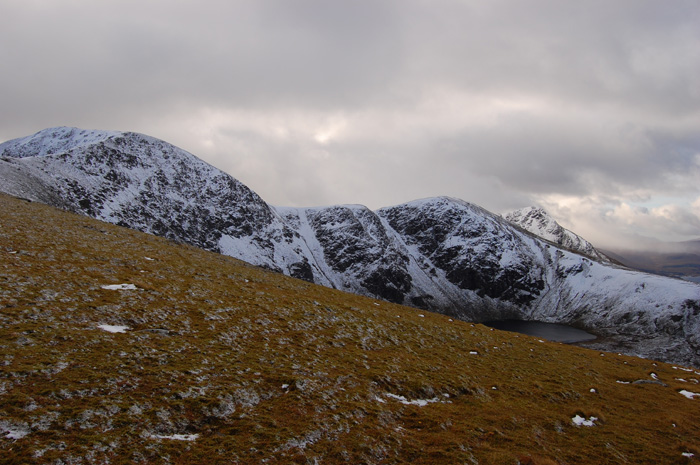 Up to Beinn a'Chreachain, snow has drifted to the left. Looked uniform depth but one step could be an inch, the next knee-deep. Had walking poles to test depth & for grip. 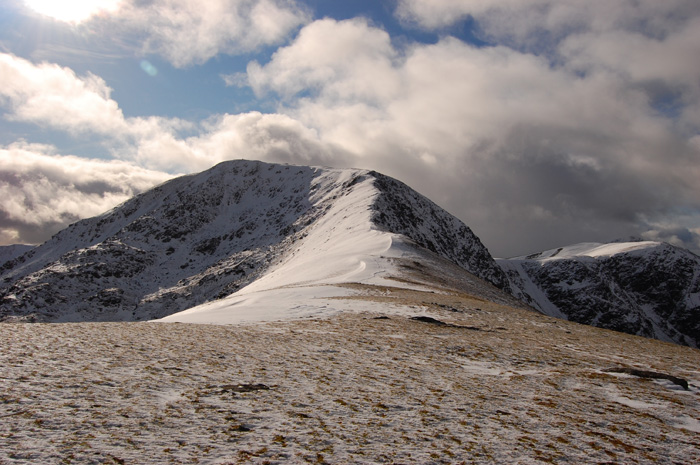 Frosty cairn. Had done first hill in the snow by this point & got nice photies so thought about calling it a day. Snow is harder going & full route would take longer so running out of daylight might be an issue. Descent to ridge was supposed to be steep, but thought I'd see how it went & turn back if needed. 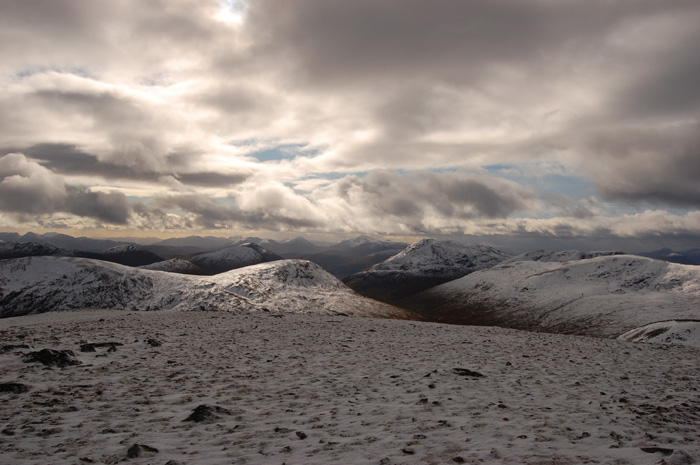 What's this approaching across Rannoch Moor though? Anyway, headed onwards. Found it much slower descending in snow/ice but could make out the path below the ridge, would give some shelter from the wind and, hopefully, would be easy to follow. Then the weather came in - strong winds with snow/hail. Was walking along ridge path by this point and kept going, would probably blow over and I could always retrace footsteps in snow to retreat. Lost the path so headed up to ridge but had reached critical level of dodginess - poor visibility, winds & hail. Followed footsteps back, although they were already getting covered by blown show.
Hail had stopped so got a photo: Then back up & over Beinn a'Chreachain, of course it had cleared by this point so I was considering a second attempt - looks fine over there now: Didn't seem too bad in snow, walking poles & boots OK for grip - one ice axe would be less stable but could stop a tumble hopefully. Didn't have gaiters though, so had wet feet on return. Would budget extra time & make best use of daylight - saw another couple of guys coming over the ridge in the opposite direction, they took ages to get over Beinn a'Chreachain & might have been walking home in dark. Was fun, but legs definitely feeling it today.

Lovely photographs gman and a wise choice retracing your steps ,even after reaching Beinn Achaladair it's still a long ,boggy drag back down the farm .

2 of my favourite mountains for the way the ground falls away in front of them - as per pic number 41- so you can see right up to Nevis and the Grey Corries.
Glad to see the snow is still the soft walkable type.
Lovely report and some top pictures