our_route.gpx Open full screen  NB: Walkhighlands is not responsible for the accuracy of gpx files in users posts
This was my first solo munro. No one was able to join me for a walk so I chose one that looked quite straight forward with no hairy scarey bits, after a wee bit of research, Meall Chuaich fitted the bill. Since my wife was working and Granny was looking after the kids I decided to make the most of the early brightness and set off from my house at 6am and stated my walk at 7.15am. Heading from Inveness towads Dalwhinnie,I thought I would have the roads to myself, no such luck, it was full of lorries, so the journey was slow. I parked at layby 94 just past Chuaich cottage as per WH report and headed back along the side of the A9 to the gate and the track. Looking south to the layby from the start gate/track.

From other reports it's about a 3 mile walk to the base of the hill and others had cycled this part on the hydro track, so I decided to do the same. This took 30 mins and probably saved me an hour on my walk by doing this. At the stat the track heads up hill(gently) until you get to a gate and the hydro track and river. Cycling along, the track was pot holed but passable on my mountain bike. . Soon the track crossed ove the river and took you past the Hydro Station. Just beyond the station the track goes over a bridge and splits, take the left fork. Go left at the fork.

At the next fork go left again. At the bothy I parked the bike and set off on foot along a wooden bridge. Bothy with Stac Meall Chuaich in the background. The track takes a right turn to follow Allt Coire Chuaich and there is a route going up that way but decided to take the well worn path up the side of Stac Meall Chuaich. As the track heads off to the right, you can see the well worn path headig up Stac Meall Chuaich.

The path is easy to follow, a bit muddy in bits, and after 1 3/4 hrs from the start I was at the Summit Cairn. Unfortunatly the Cloud base was right down so I had absolutely no view. Munro No. 10 bagged, thank goodness for the self timer device on the camera.

The summit is flat and featureless,well it was in the mist, so without much further ado, I headed off. I decided to take another route back as I had made good time so I had some time to play with. I retraced my route back for a bit but as the weather was good, I decided to go down the other side of Stac Meall Chuaich, which would take me to the far side of Loch Cuaich and a hydro track back to the Dam. 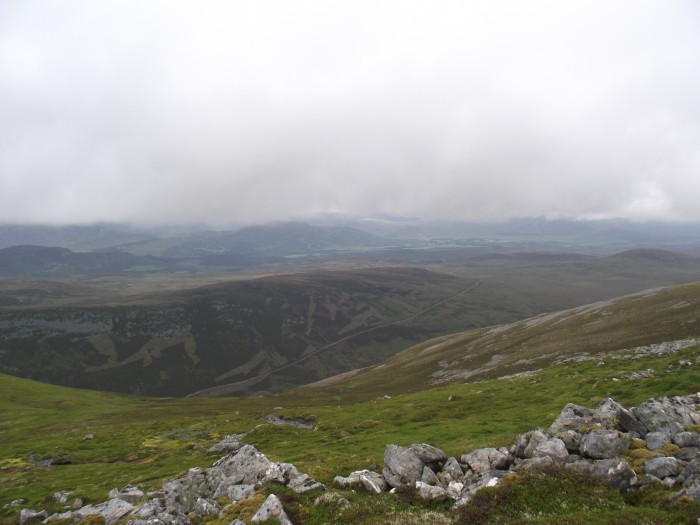 My route back down, to the right of Stac Meall Chuaich The terrain was heathery, with lots of wet moss, quite soft and springy.

Iheaded for a river and decided to follow it down. at this point it got quite steep and at parts I had to hold onto the heather and slither down. 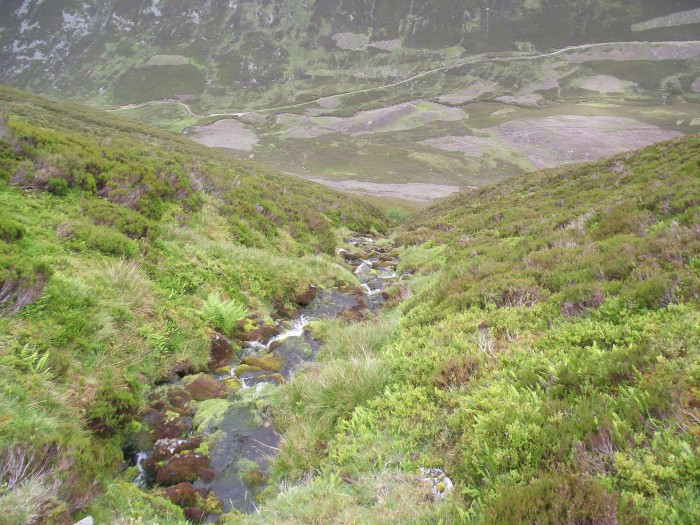 Following the rive down. 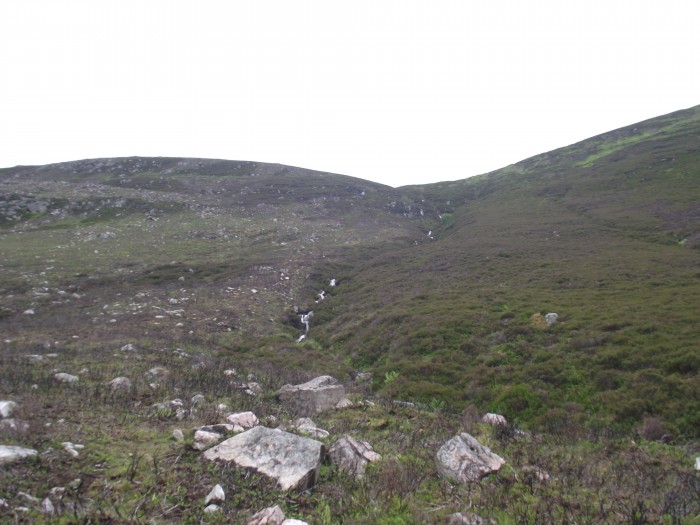 Looking back up the route I took down, by the river. After a scramble over a deer fence, I was back on the track and heading round the Loch. The track round the Loch

Soon I was back at the Dam and onto the bike. 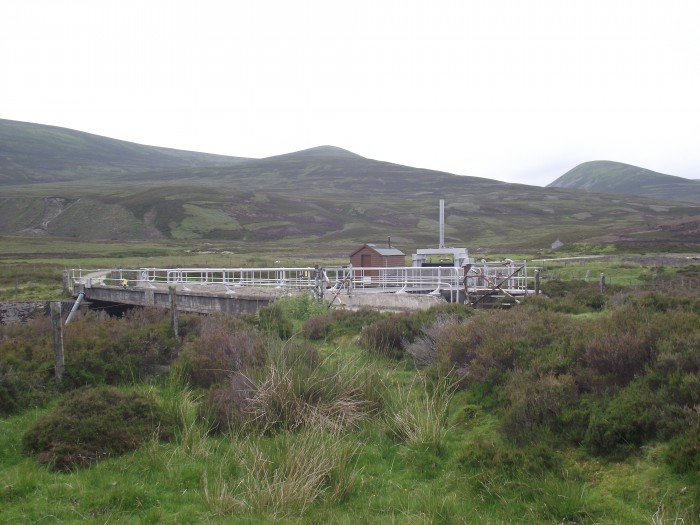 On the route back I encountered this Grouse crossing the Track. At 11.45 am I was back at my car. Not the most spectacular of Munros but a nice introduction to going solo.

Congrats on your first solo walk and nice report with good photos. It looked a fair walk in and I'm sure thats why you took the bike. Thank god for Timers on cameras....

Thanks Jockstar. I did Slioch last year and it had an hours walk in and in hindsight I wish I had a bike for that so this time since the track was good I took the bike. Luckily on the way back it is mostly down hill so it was great fo the tired feet.

learn something new every day, never thought of taking bikes to do the walk ins!
Great report

Hi - well done on your first solo munro! Did my own a few weeks back and it's a great feeling knowing you can do it (and peaceful ha ha).

fazerneil wrote:learn something new every day, never thought of taking bikes to do the walk ins!
Great report

As long as I start my walking at the bottom of the hill, then I don't feel I'm cheating (Cairngorm the exception as you start at the Car Park almost half way up) Slioch took me 8 hrs and knowing I still had an hours walk left to get to my car was mental torture. A bike is handy fo some of the walk ins and outs.

littlemrs29 wrote:Hi - well done on your first solo munro! Did my own a few weeks back and it's a great feeling knowing you can do it (and peaceful ha ha).

Cheers, It's quite good going at your own pace and stopping when you want but I do miss the banter of walking with othes. I like to put photos up that detail where to go as when I'm planning a route I like to check that there are not too many scary bits, so if I can do the same for others great.

Well done to you, its liberating knowing that you can just throw a sack in the car and head off on your own whenever time permits.
You had me thinking there as to what and when my own first solo munro was...Braeriach Sep 2006 at the 2nd attempt (the first attempt was with company but we never made it all the way..thankfully as it turns out). I never looked back after that and I think almost half (at least) of my 141 have been done solo.

Thanks pollyh33, you're right it is good to choose or alter your route and set off when you want to. I've a few more reports to do from the summer, one from the Cuillins on a cracking day, I'd have them up sooner if it didn't take so long to do, almost as long as the walks themselves. Lol

Your description of the route is first rate, and was an invaluable guide to me when I did this hill solo on the last day of Nov 2012.

I really appreciate the route descriptions that give the fine detail of a route: "take the left fork, ignore the first stalkers path you come to, be careful of the boggy stretch of path at such and such a point" - that sort of thing.

I find advice like that really invaluable, especially as I do most of my hill-walking solo.

I don't know if it’s just me, but I often find the most difficult part of any walk the VERY START – i.e., actually finding the path to start with!

Once I’m on the path I’m fine, but the starting point is often quite tricky.

Thanks again for a great, detailed and very practical route description.