A lack of work led to some enforced annual leave being taken, so I thought I would get out on the hills again. Numerous possibilities passed through my mind, but in the end, I went with dropping my wife off at work in Aviemore and doing something nearby.

Cnap Chaochan Aitinn had only come to my attention a couple of years ago when climbing Geal Carn nearby. Initially, an ascent by bike looked to be the best option, and a full circuit is possible, returning by Inchrory higher up Glen Avon. However, I thought I'd explore the less obvious parts of the hill. Last year, Cuillin explored an aircraft wreck to the south of the summit, and I had a notion to have a look at another feature to the north, the Ailnack Gorge. Hidden away in the moorland between Carn Chaochan Aitinn and Gean Carn, it is a huge glacial meltwater channel. It is barely visible from anywhere (I'd tried having a look into it while on Geal Carn), so I decided the best way to see it would be to get right into it.


Cnap Chaochan Aitinn.gpx Open full screen  NB: Walkhighlands is not responsible for the accuracy of gpx files in users posts

I parked up at the Queen's view carpark in Glen Avon and set off at about 10:45am. I walked down the road over the Avon, and up the drive past Delnabo. 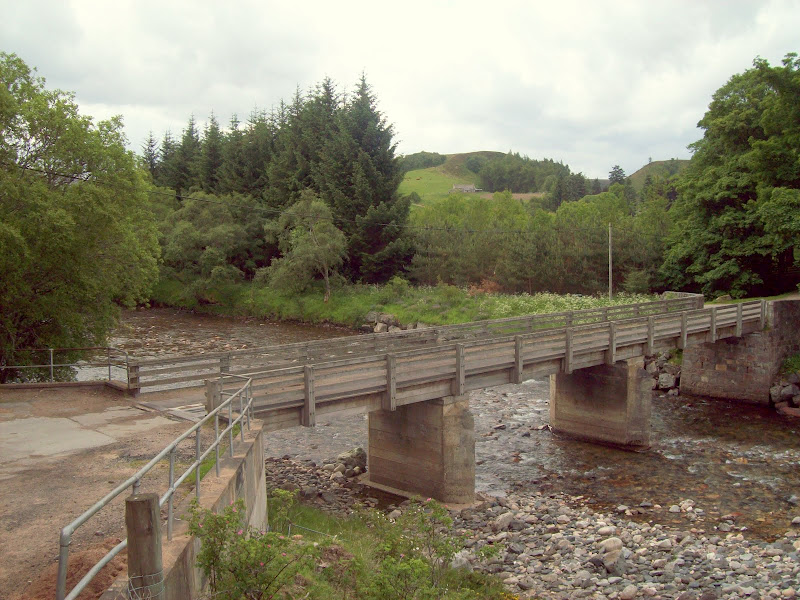 For the lower part of the Ailnack gorge, there was a good vehicle track to follow. While the track stayed away from the edge for the most part, it was easy to take a walk over for a view, which I did from time to time. Lots of sheep up here. 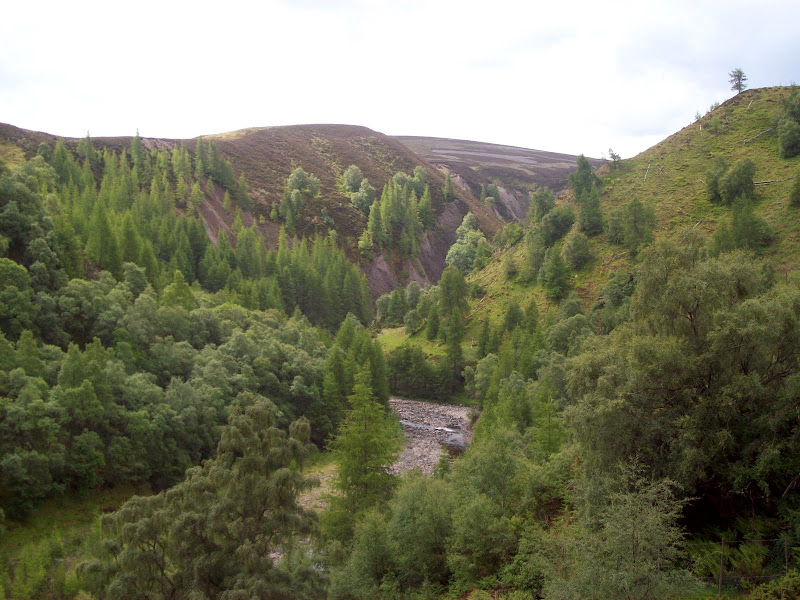 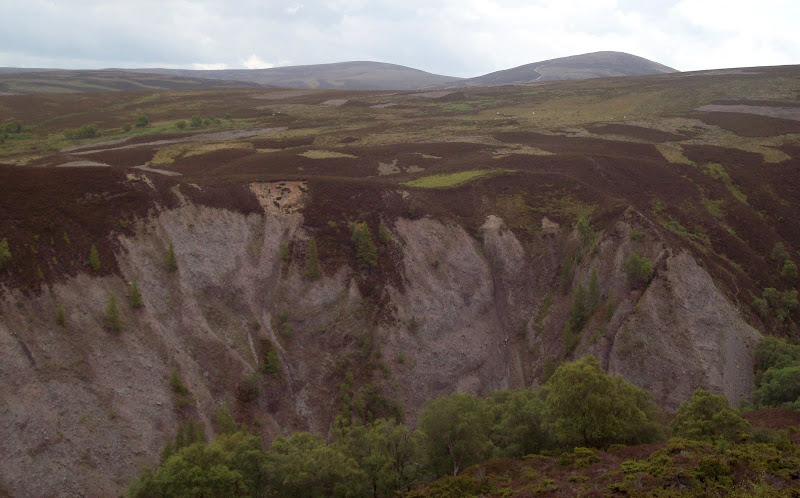 ...and across to the distant Ben Avon plateau: 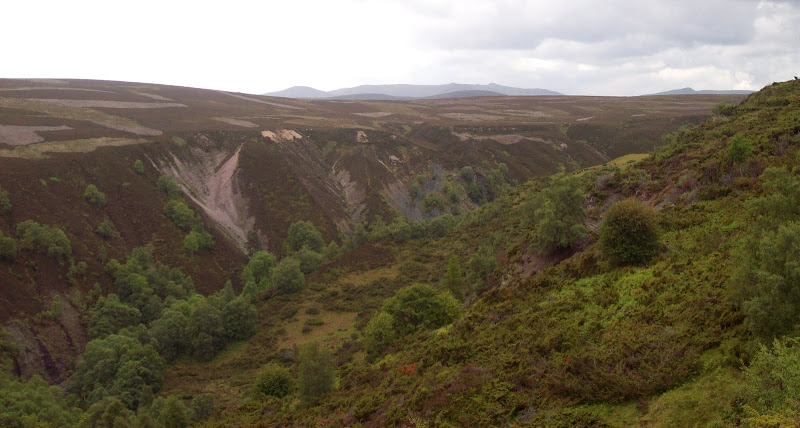 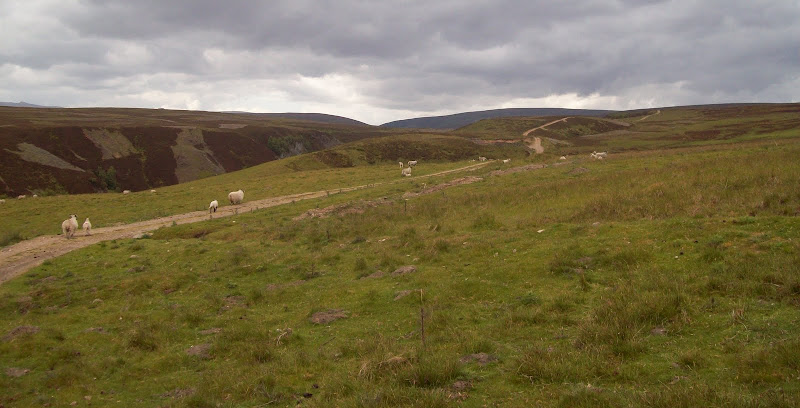 The track ran out near Lochan Uaine, and a faint path continued. Although marked on the map, it was little more than a deer track, contouring along the hill side. Progress slowed down somewhat at this point. There was quite a steep drop down to cross the Allt Dercaige, then back up the other side.

NE down the gorge: 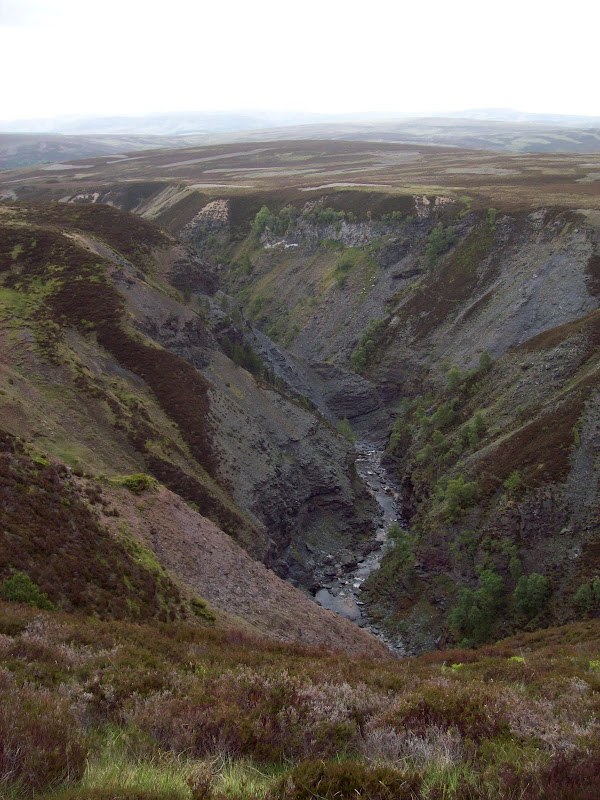 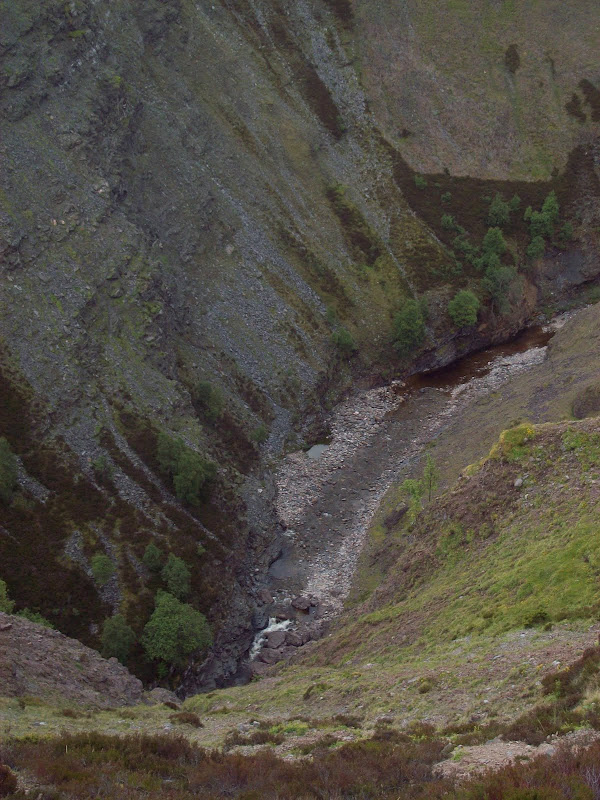 Once adjacent to Carn Ruabraich, the gorge sides eased off, and the easiest going was right down by the river. Down here felt hemmed in, and reminded me a bit of the upper Tilt, but without the path. 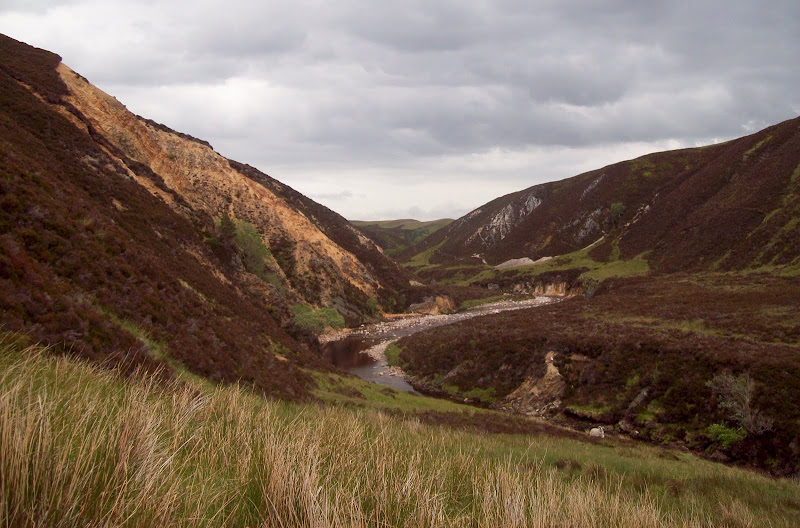 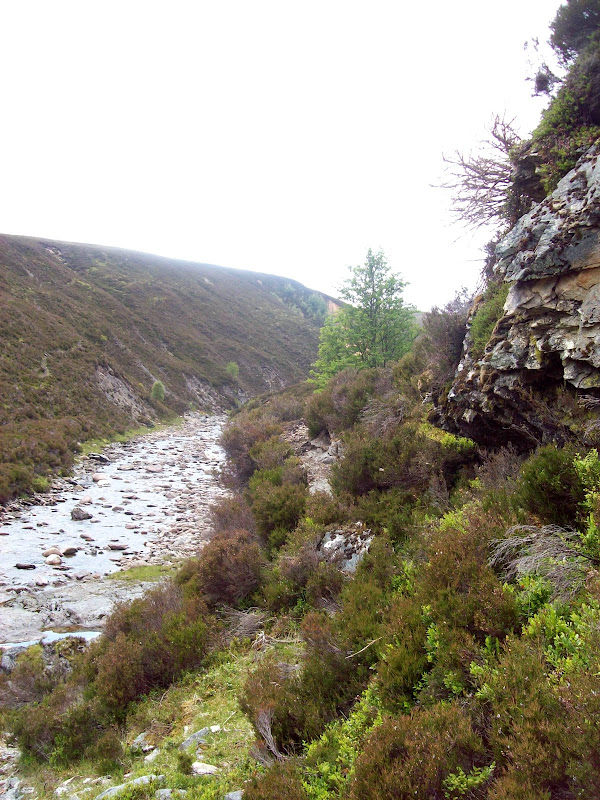 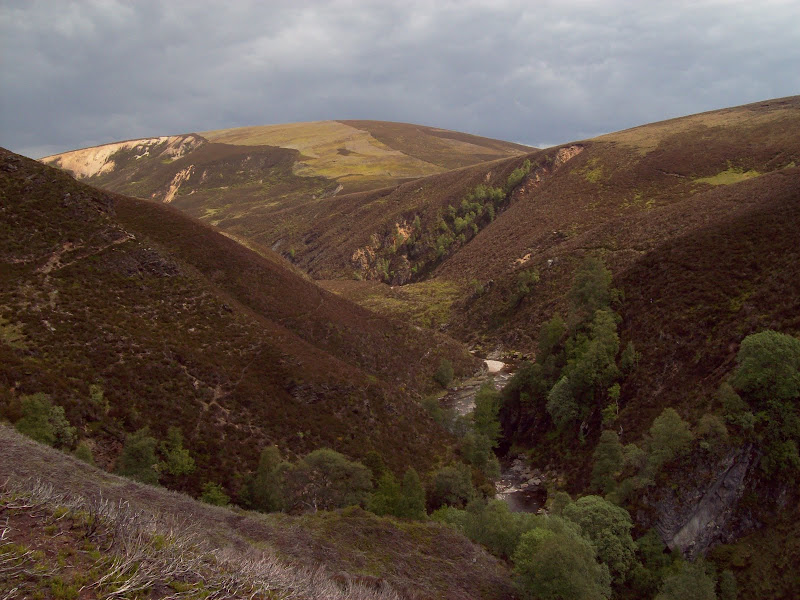 A climb out of the valley again, and I could see I was getting closer to the next rocky section of gorge. I could have made my escape towards the hill from here but I decided to carry on up the gorge. For some reason I chose the west bank, despite it being the wrong side for my hill. Probably because the going was easier and the views were better.

Getting closer to the Castle: 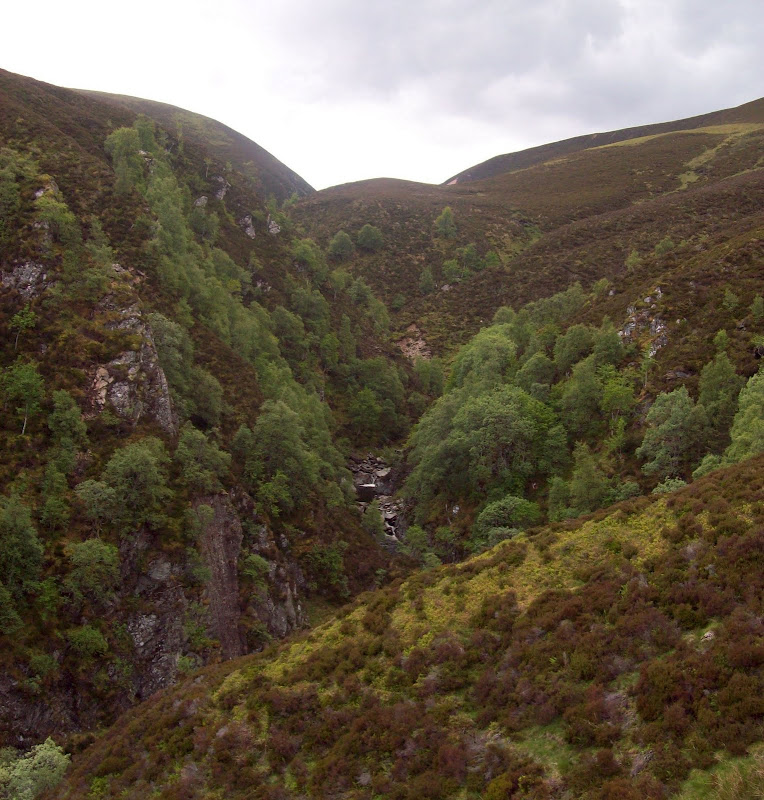 Going on the west side also got more difficult, and I began to worry about places to cross, as time was disappearing fast, and there was no way I was going to get along the whole gorge. I slid down steep heather into the bottom of the gorge, and crossed the river.

Down in the bottom of the gorge: 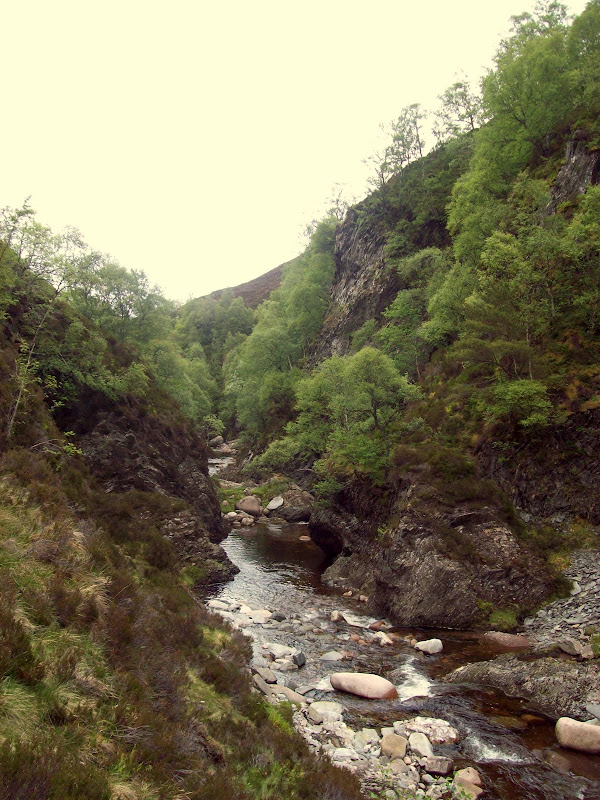 Escape on the other side involved steep scrambling, but up heather rather than rock. It reminded me of Chirs's recent heather scramble out of Glen Doll (but shorter).

Looking back down the heather scramble out: 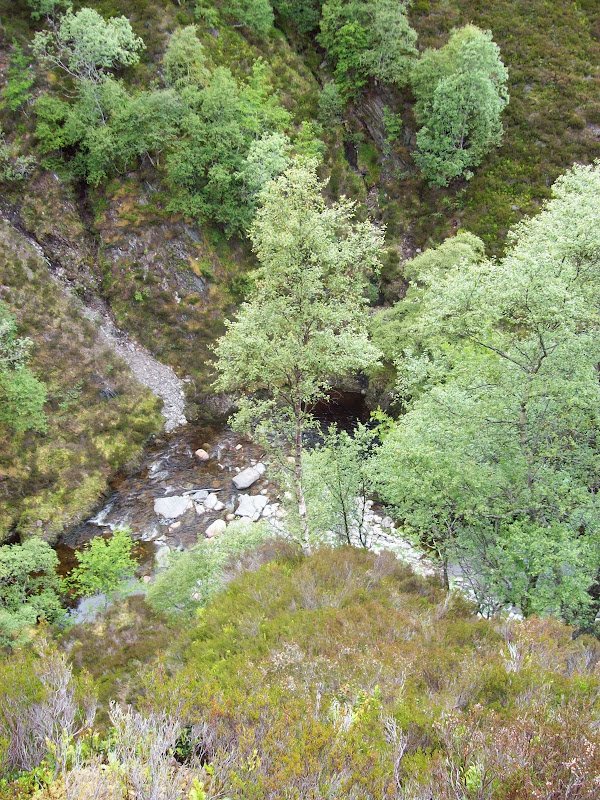 I clawed my way out of the top and started traversing the heather to the north of Carn na Ruabraich (actually a different hill to Carn Rubraich earlier). A last look along the remainder of the gorge before carrying on. 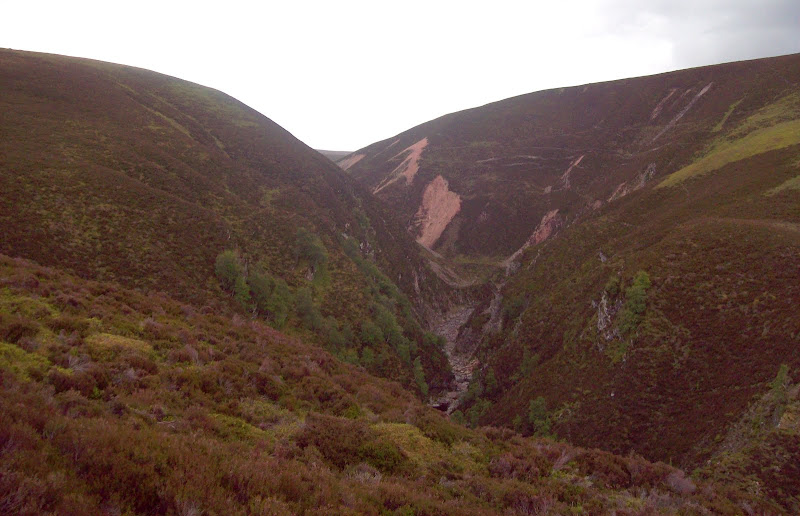 There were a few trial pits on this slope. I've never heard anything about a windfarm in this area, but along with the tracks and monitoring equipment on the summit of the Cnap, I suppose it's quite likely.

Trial pit: windfarm on the way? 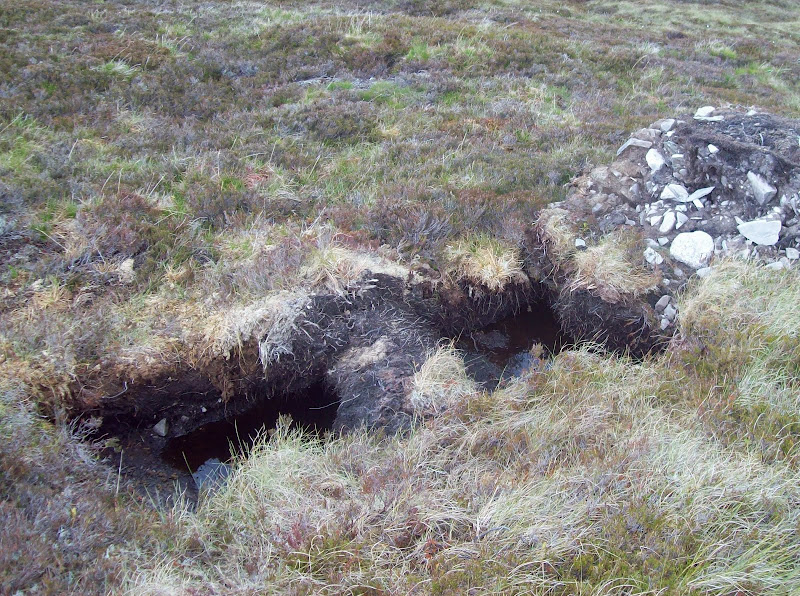 Although I was contouring round Carn na Ruabraich, I actually ended up on the cairn at the eastern end. Finally, Ben Avon and Bheinn an Bhuird finally popped into view. It only took 10 minutes to reach the main summit from here, assisted by a vehicle track for the final section. 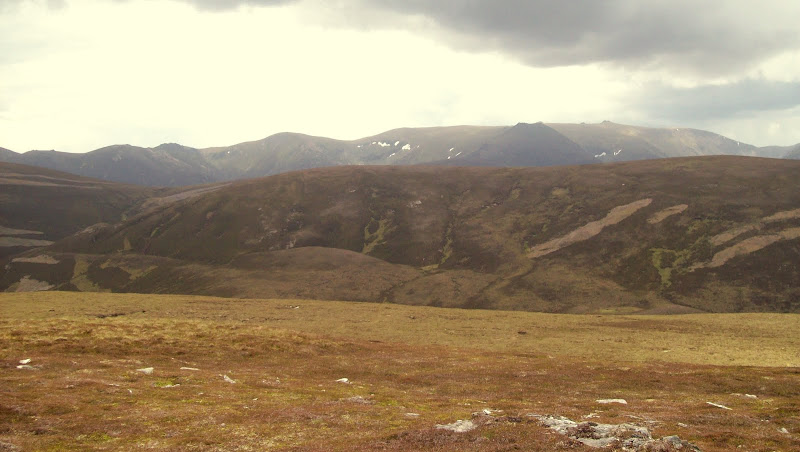 The summit contained the aforementioned monitoring equipment, which would have come as a bit of a surprise if I hadn't seen photos of it previously. Views to the Cairngorms were good, but as ever on this side of the country, I tend to struggle to capture it well on camera. I stopped for lunch here, knowing that the route home was on tracks the whole way. 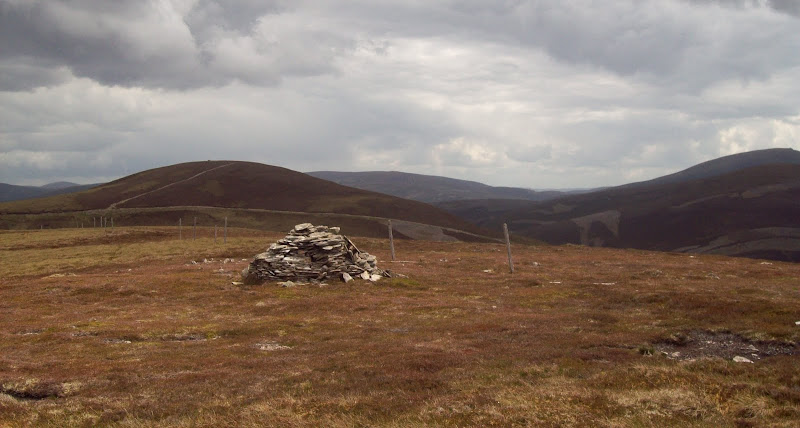 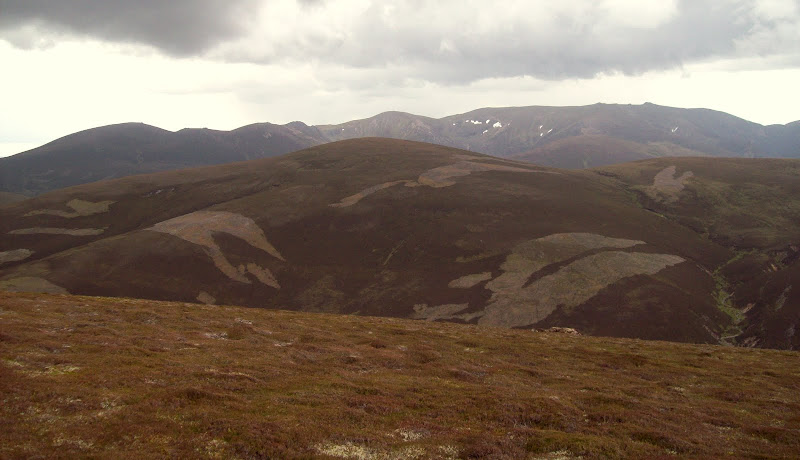 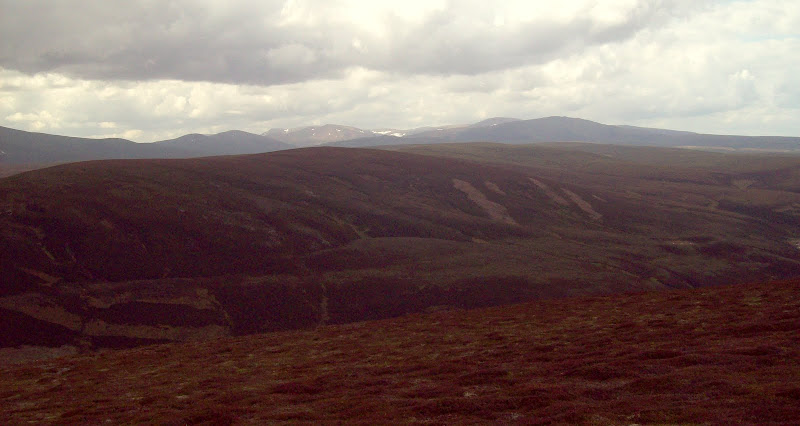 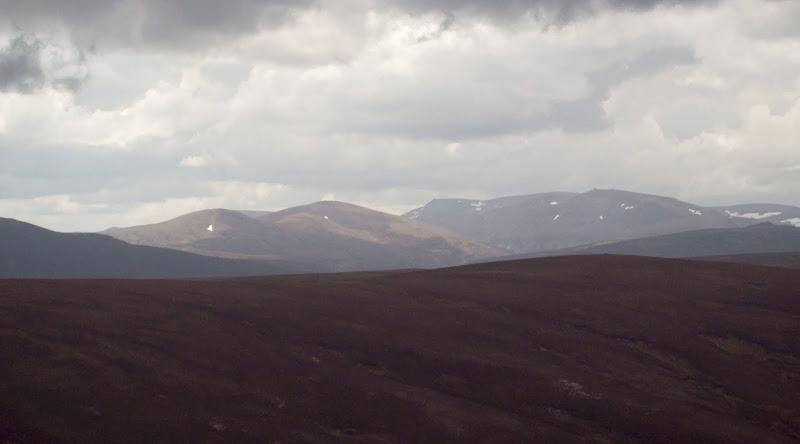 I followed the tracks back down to Glen Avon. Not my favourite kind of walking for any length of time, but pretty quick. I wished I'd picked my trainers rather than boots, as I was now late, and could have done with jogging down. One of the peat hags I passed had really prominent tree roots in. Hard to imagine this area with a full covering of forest! 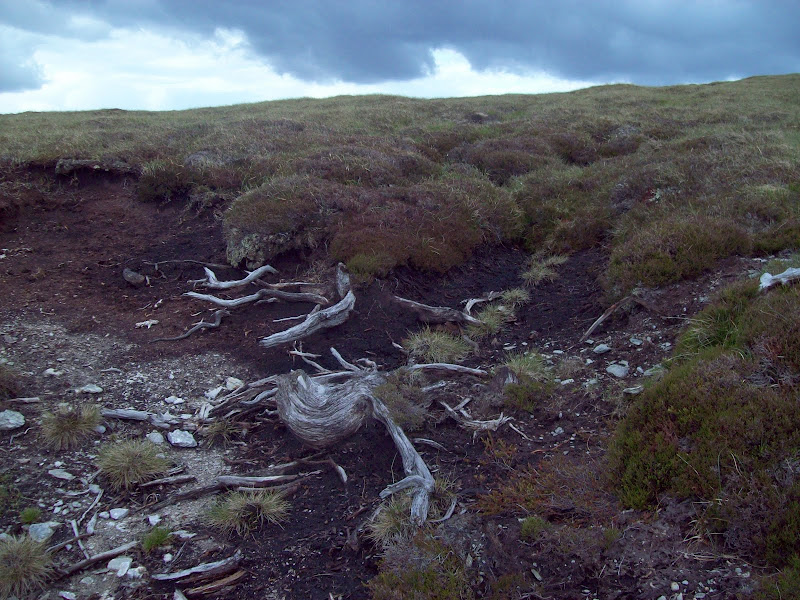 Looking back to the summit on descent: 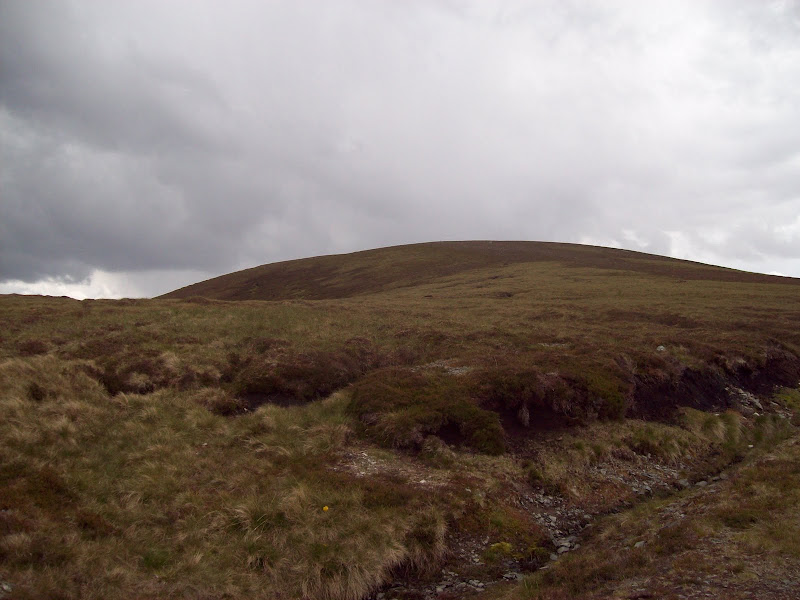 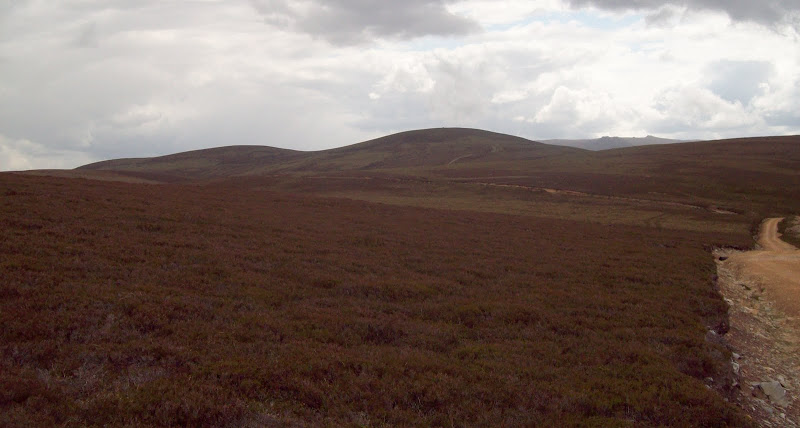 Lower down, I entered an area of real live trees, before passing Wester Gaulrig and dropping down to the bridge over the river Avon. Nice views up Glen Avon from here. 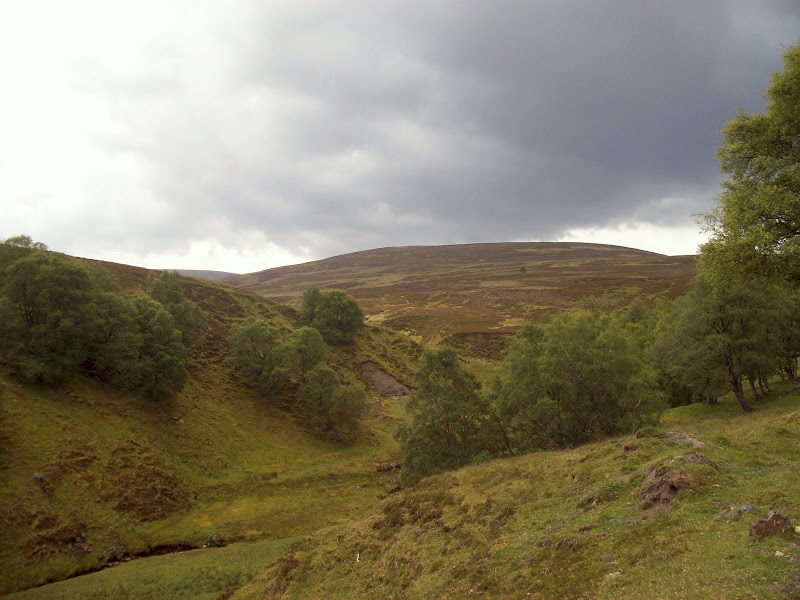 Up Glen Avon from Wester Gaulrig: 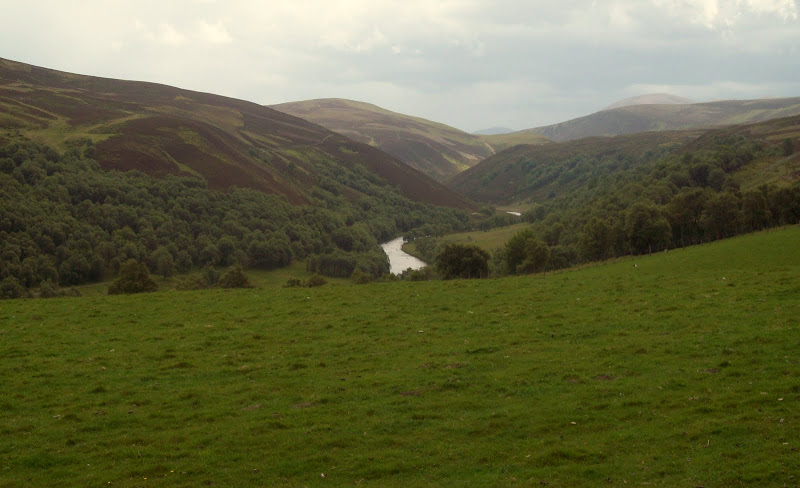 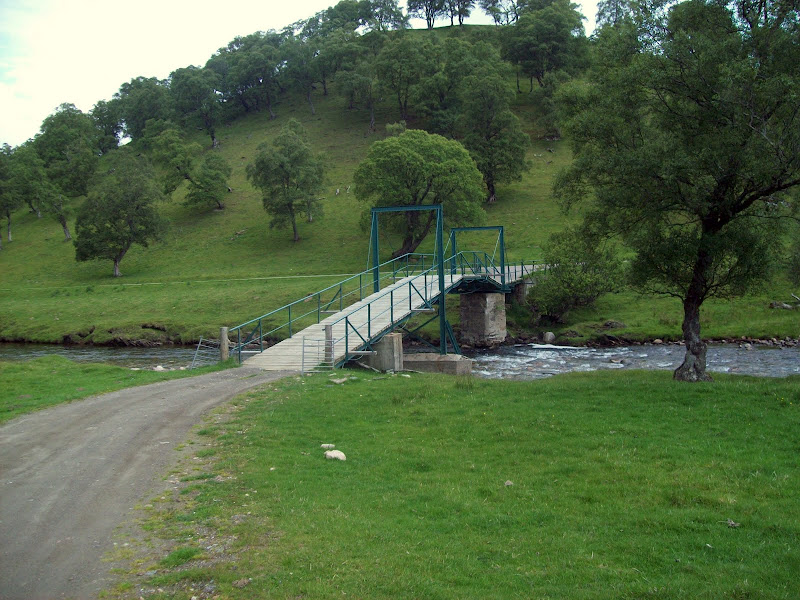 Once on the tarmac road, I passed the only other person of the day, a cyclist heading up the glen. 20 minutes brought the branch off to the Queens View carpark, and also a couple of showers. I decided to have a look at the Queen's View. Nice enough, but not that different to the views elsewhere in the glen!

Glen Avon from the Queen's View: 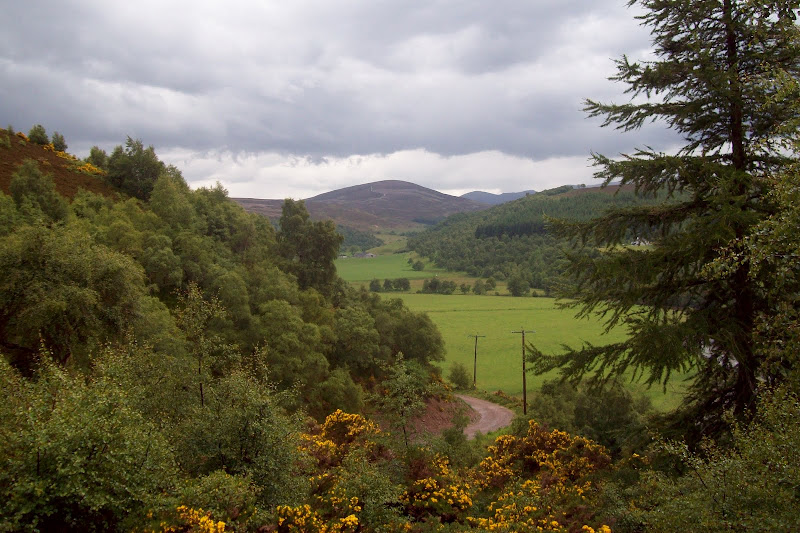 Back at the carpark, a woman was just about to head up Cnap Chaochan Aitinn by bike. Two ascents on a weekday must be pretty rare for this hill!

We set off to do the same walk in mid-May - but got to the Graham summit and got smacked by some horrible squalls - retreated through the glen.

thought we might come in and explore the Ailnack Gorge from Delback Lodge next time.

Jealous - I'd wanted to get in there.

I have an adventure up the gorge pencilled in for a hot summer day sometime. Cheers for the info

Great report malky, nice to see something a bit different - those heather scrambles can be bloody hard work though. Interesting test pits, I reckon we may see a huge rise in windfarms now......really not sure how I feel about that

ChrisW wrote:Great report malky, nice to see something a bit different - those heather scrambles can be bloody hard work though. Interesting test pits, I reckon we may see a huge rise in windfarms now......really not sure how I feel about that

I have slightly mixed feelings when it cones to this particular site, although this has been covered elsewhere so I won't go into it again. The thing which strikes me as odd is that this is within the Cairngorms National Park (had to check that when I got home). Possibly the pits are from a few years back, before the park existed? Can't imagine planning permission even being considered within the CNP boundary?