Brecon Beacons round - in fair weather this time!

Following our walk on the Derbyshire moors in the Stanage Edge area, we'd been talking about arranging another, but hadn't got as far as fixing an area, or a route, or even a date. Then John got in touch to say that he'd be holidaying in Ross-on-Wye during the last week of April, and what about sneaking off for a day for a leg stretch in, say, the Brecon Beacons? After some to-ing and fro-ing around dates and other commitments, and some skillful diplomacy with our respective CEOs, we eventually managed to fix on 27th April.

John's first suggestion was the traditional Beacons Horseshoe, and coincidentally, in terms of its likely duration, this fitted in with the fact that he had another commitment that meant he had to be away by 16.30 - but then he was able to make alternative arrangements, and there was therefore no deadline for being back at the cars. I'm pretty unenthusiastic about walking on tarmac, but I do like rounds (as opposed to out-and-backs). Moreover, the traditional horseshoe misses out Fan-y-Big and Waun Rydd, and it seemed to me that now there would be time to fit these two in in a slightly longer round. And the last time I'd visited all these hills had been in heavy rain and dense clag - reason enough to visit them in fine weather. So I set about trying to minimise the amount of walking on metalled roads while still walking a round. And this is what I eventually came up with: still a fair bit of tarmac, but also a few stretches on paths and tracks.

And it looked, too, as if the weather would play ball - it seemed like this day would see the best weather of the week. 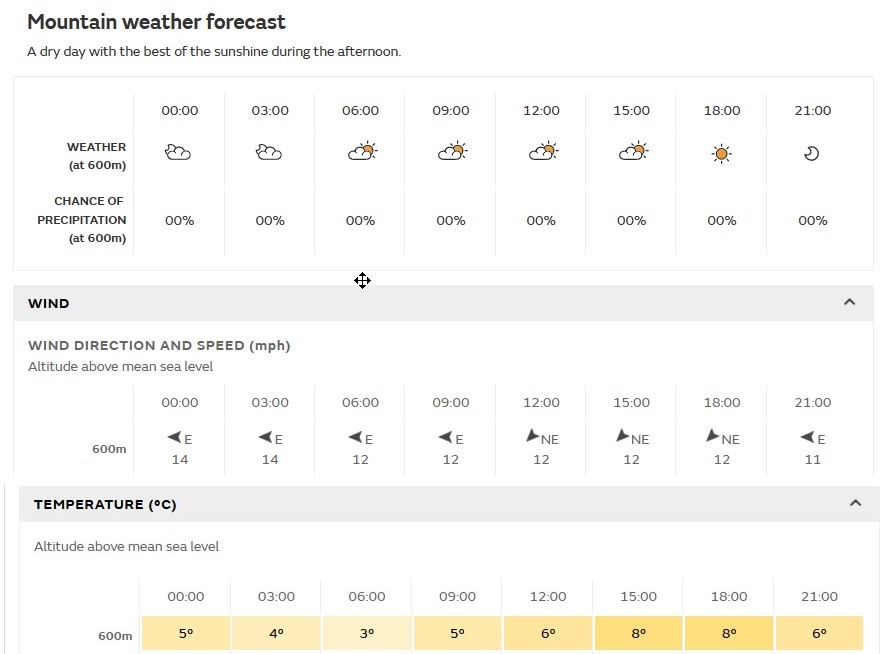 Note, however:
1. The moderate windspeed forecast; and
2. The forecast temperatures above 600m.

More on this later!

As it turned out, this definitely wasn't my finest hour in the article of route-finding. I'd opted for a start place deep in the narrow lanes that snake about below the Beacons, which the sat nav rather struggled to find. John had a similar issue: I was unknowingly a kilometre or so past the place I wanted to be when, just after crossing a tiny bridge, who should I end up bumper to bumper with but John, who told me that road he was now returning down was a dead end. On the positive side, there was space to park the cars just the other side of the bridge, so that's where we decided to start from. Note: not the place I'd originally planned, which, it transpires, is almost hard-wired into my head. And I omit to check on my OS software precisely where we are. Not clever!

After a quick breakfast, and check on the map, we set off. Only for me, a kilometre or so later, to realise that I don't have my map with me - GROAN Returning to the cars, there is the map spread across the roof...

Not the best start... What standing I may have had as an experienced walker is rapidly disappearing into a muddle of mistakes.

Unfortunately I am too busy yakking and miss the left turn off the road on to the path just before Pentwyn that leads to the footbridge across the Nant Manasgin; so once in the courtyard at Pentwyn, rather than backtracking, I head straight down the fields to cross the Nant Menasgin, which in turn leads us into a thick holly jungle on the steep side of the valley with no obvious path through it. By this time I'm sure John has lost all faith that I have any route-finding abilities whatever. But I think I recover a smidgin of trust when I tell him we'll intercept the track we'd originally been aiming for if we just continue 10 metres or so further through the holly jungle up the valleyside - and we do!

The track leads quite straighforwardly up to the end of a metalled road, from where a path passes through a farm courtyard and out into fields. From here we just cut diagonally up the hillside in the rough direction of the first highpoint on the ridge - Bryn - at 562m. 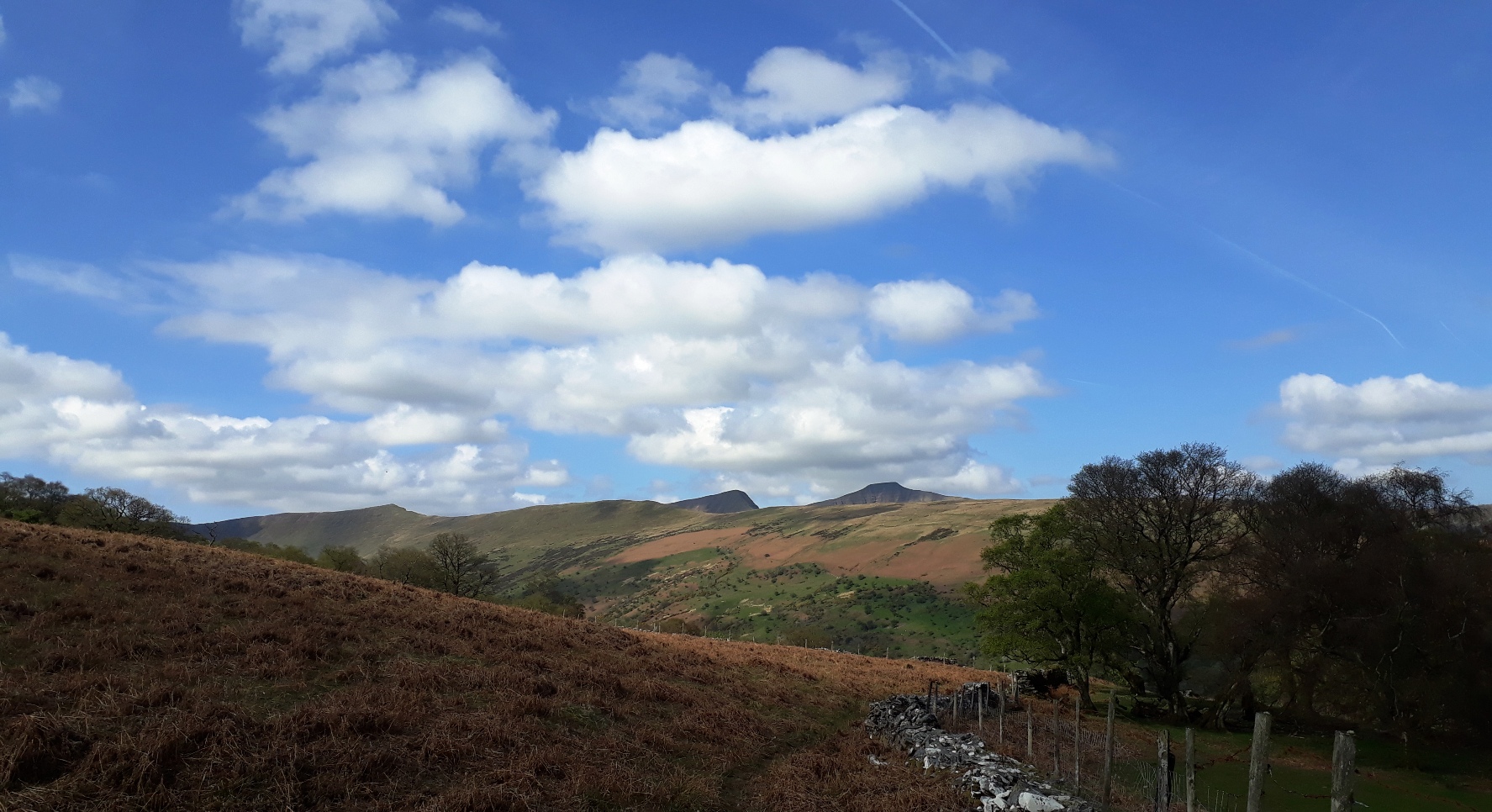 As we - slowly, slowly - get to the ridge, the views are superb.

Waun Rydd summit itself is so unremarkable that I forget to take a pic of it, and it's over an hour before the spirit moves me to get out my camera again. 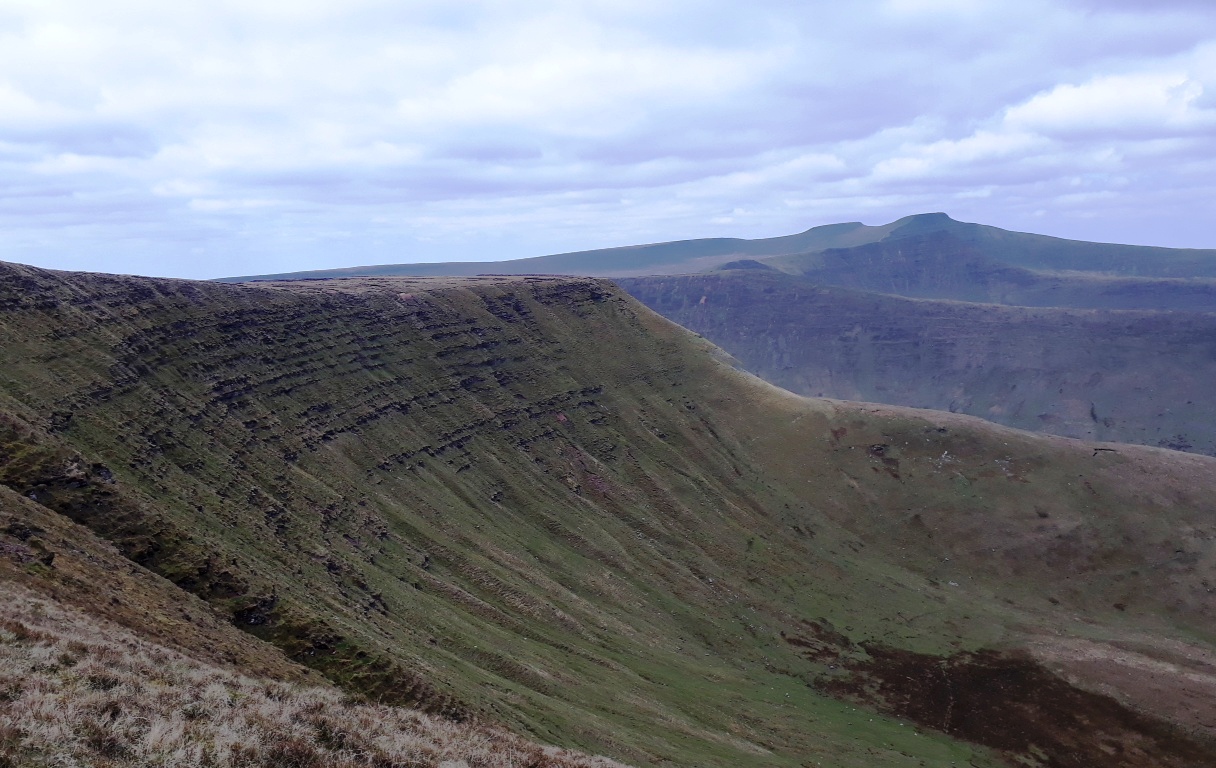 20220427-121327. First close view of the characteristic Beacons scarp slopes, this around Bwlch y Ddwyallt. What we do notice is that it's pretty nippy: not only are the forecast low temperatures being realised, but there's a really brisk breeze - most of the time in excess of 20 knots. We're both now well dressed up for the cold, having earlier stripped off a layer or two after the exertion of climbing to Waun Rydd. 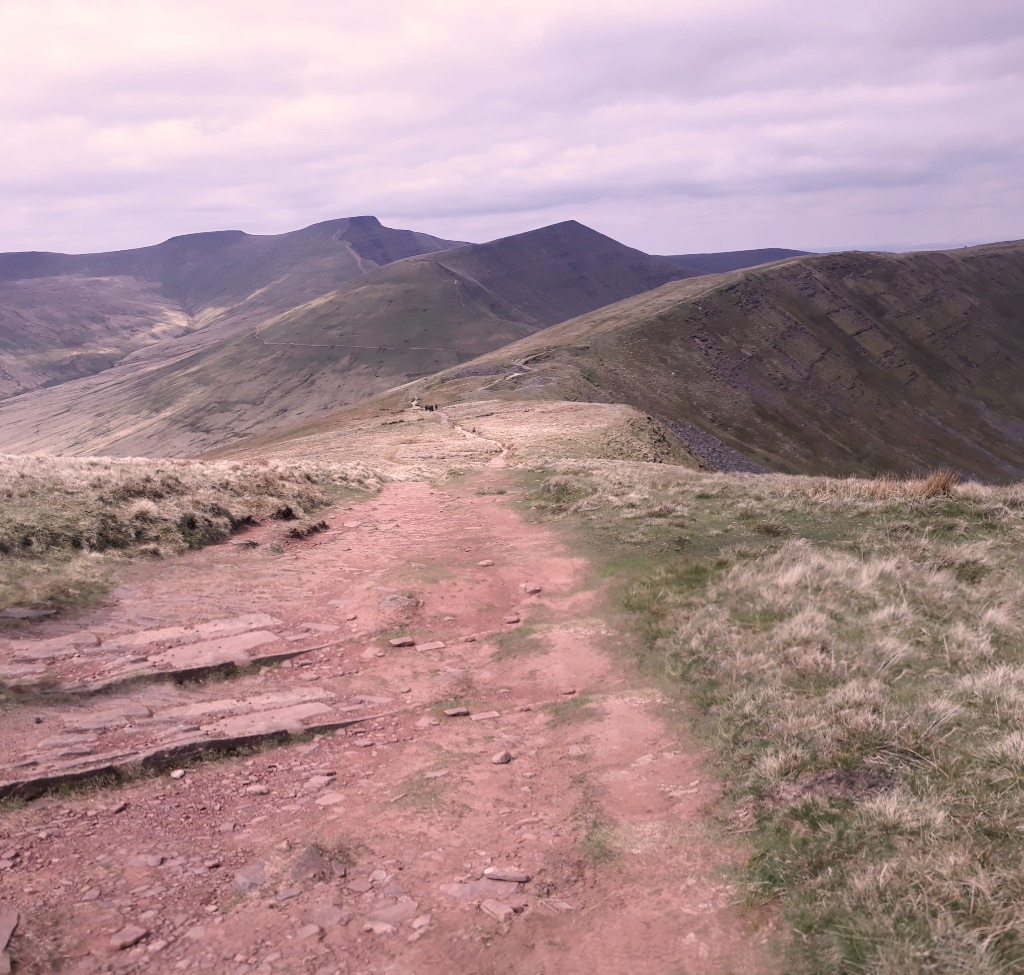 Reaching Fan-y-Big, the little boys have to play... 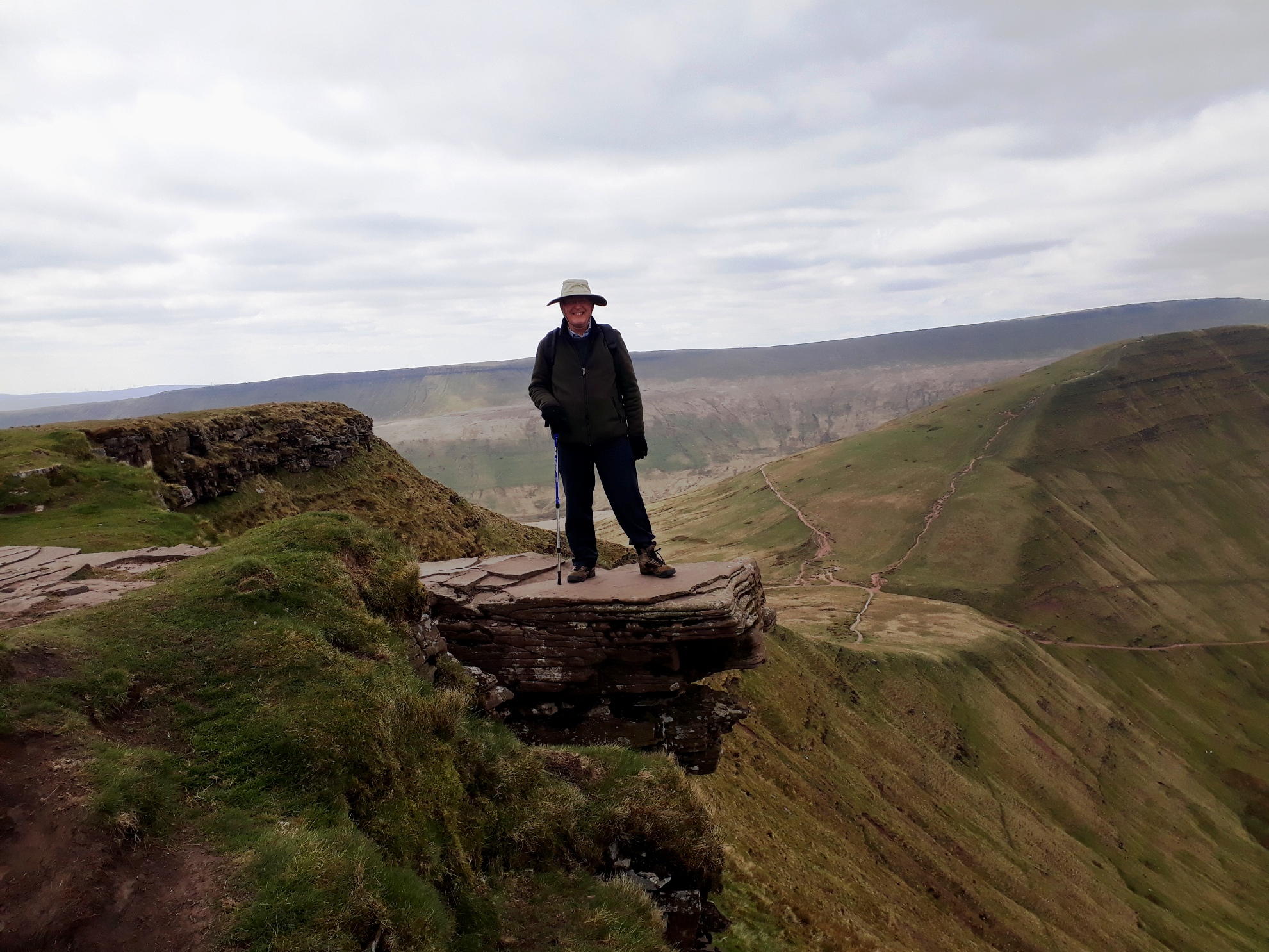 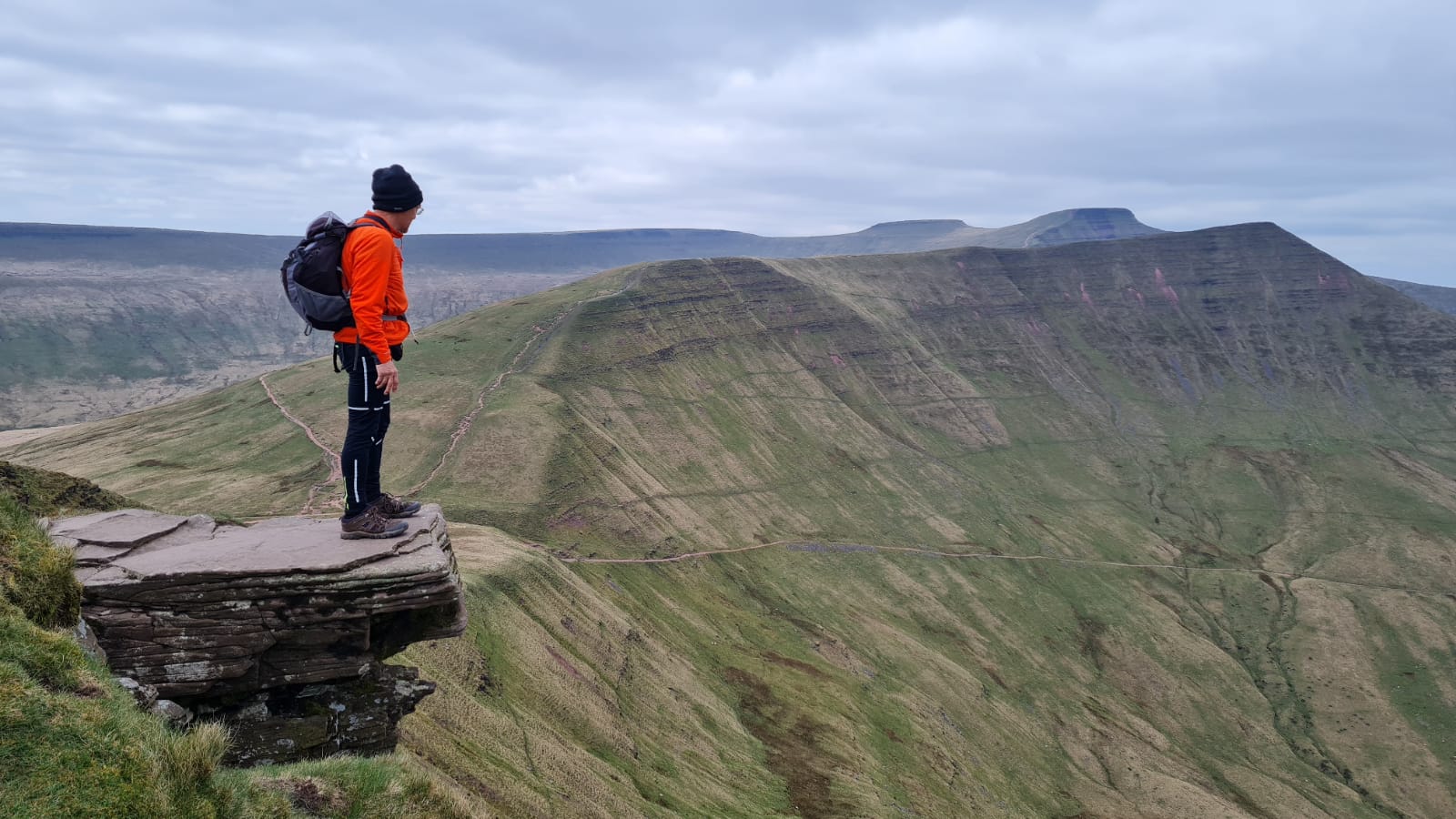 (Looking back to Fan-y-Big later, it's reassuring to see how many other "adults" can't resist doing the same thing.... 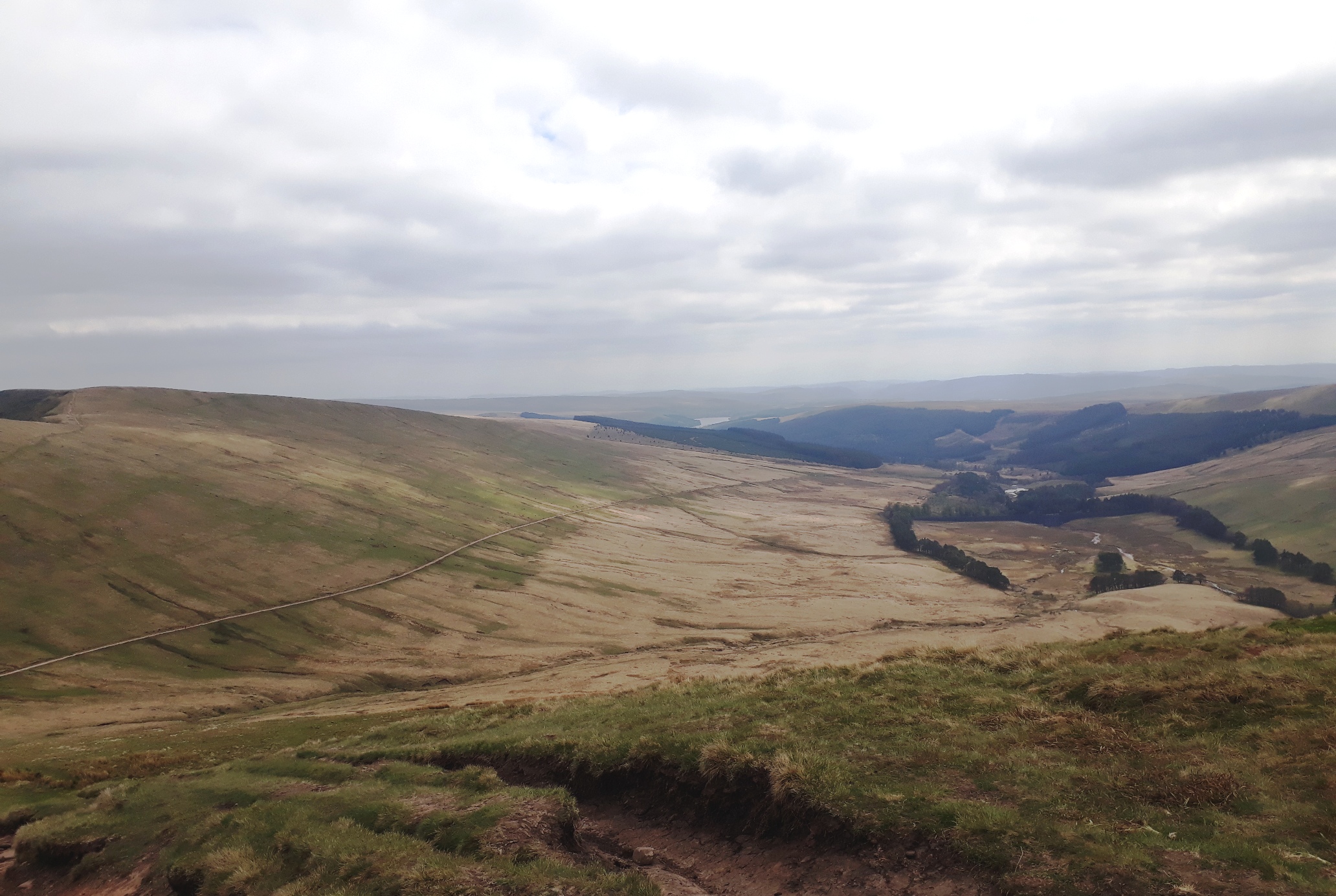 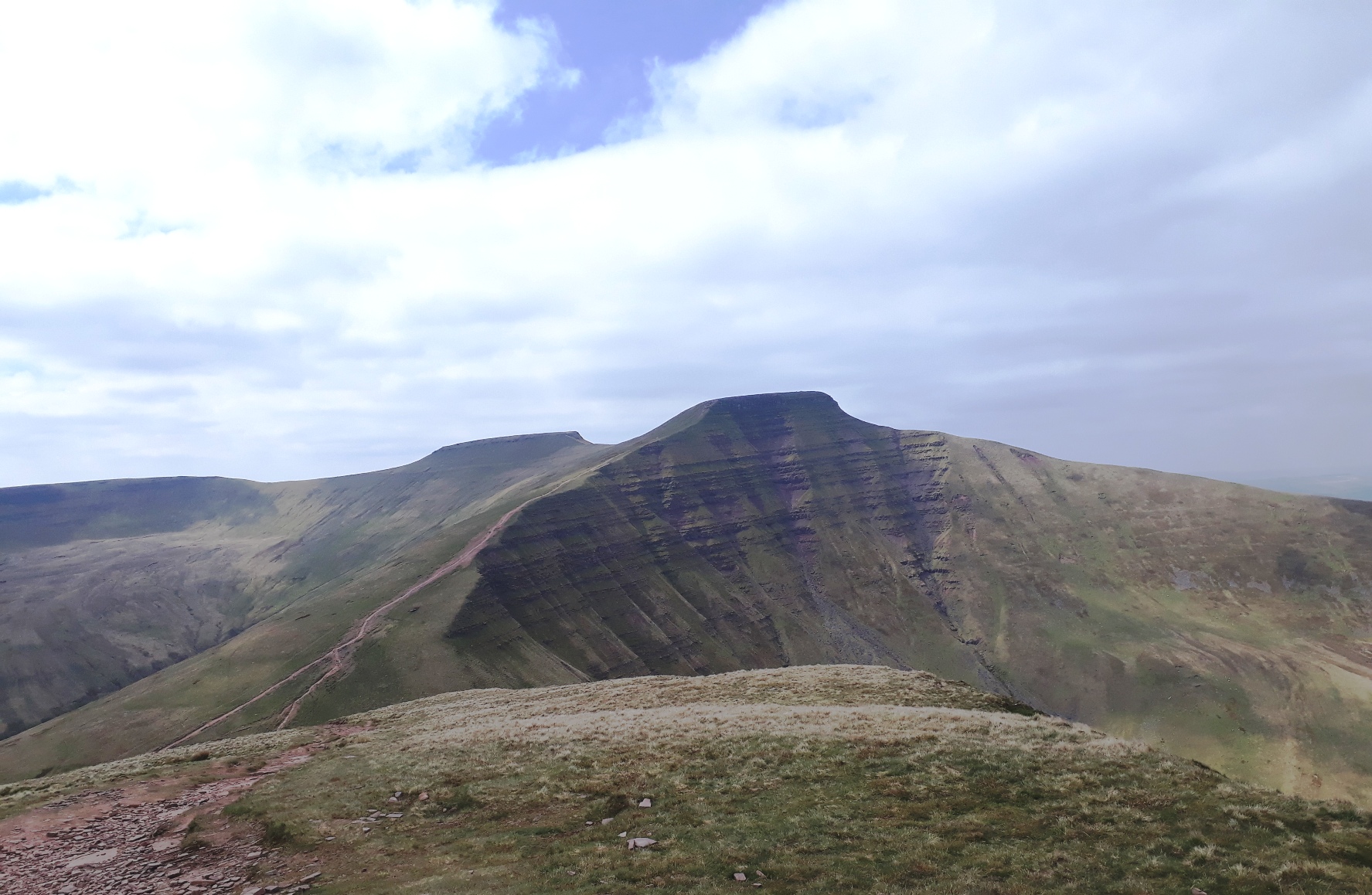 Which is quite a slog at this juncture. But as we approach the summit, we notice that there's very little wind - the path is in the lee of the hill - so we pause for an extended lunch, over which we admire the singular geology and geomorphology of this remarkable area. As John remarks, we could have done with having our geologist friend Phil with us to provide a bit of explanation (quite apart, of course, from the benefit of his excellent company

The wind is fairly howling on the summit, when some kind folk take this pic of us two old fogies. 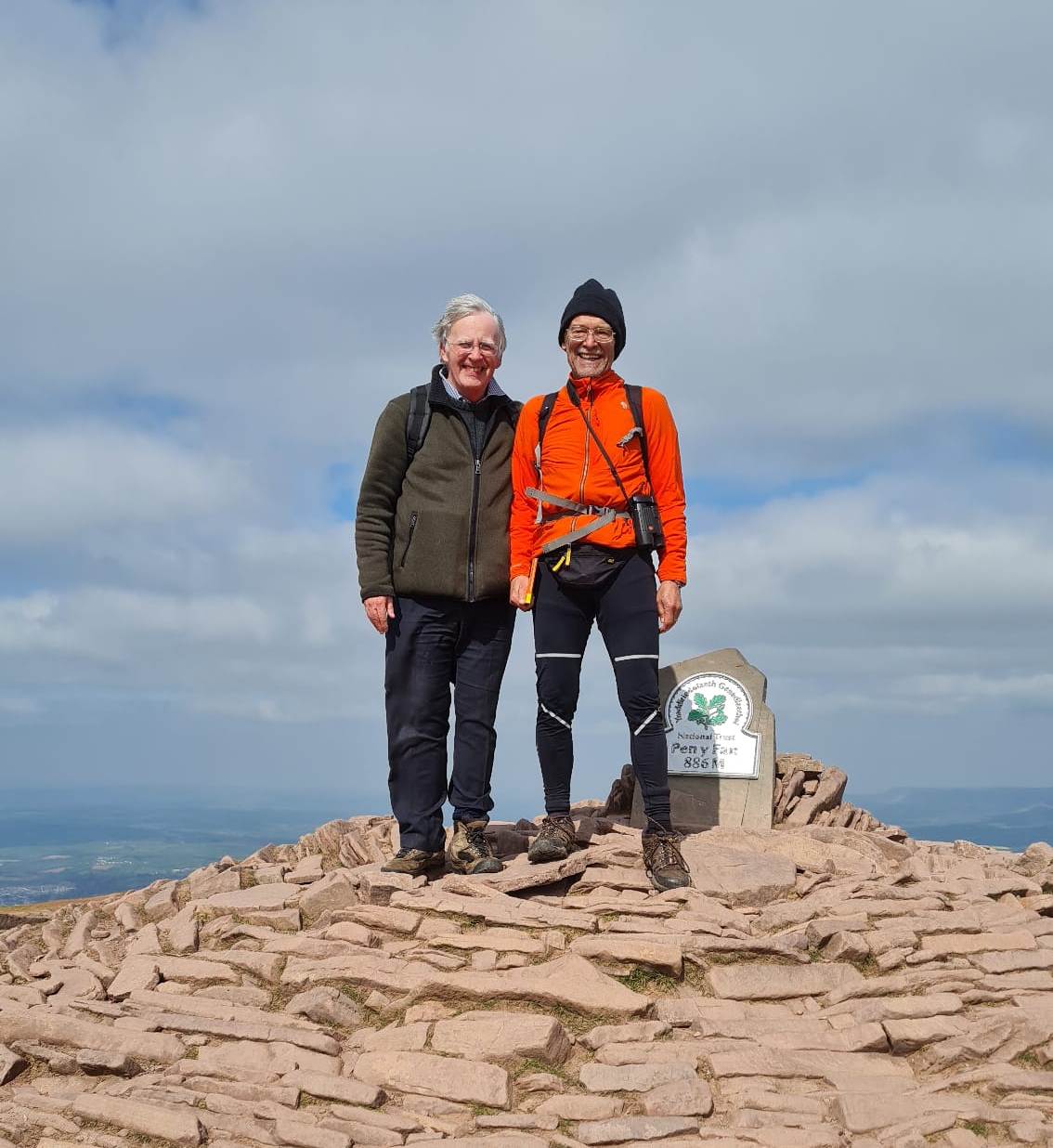 The light is all over the place, as this pic taken facing in the opposite direction illustrates. 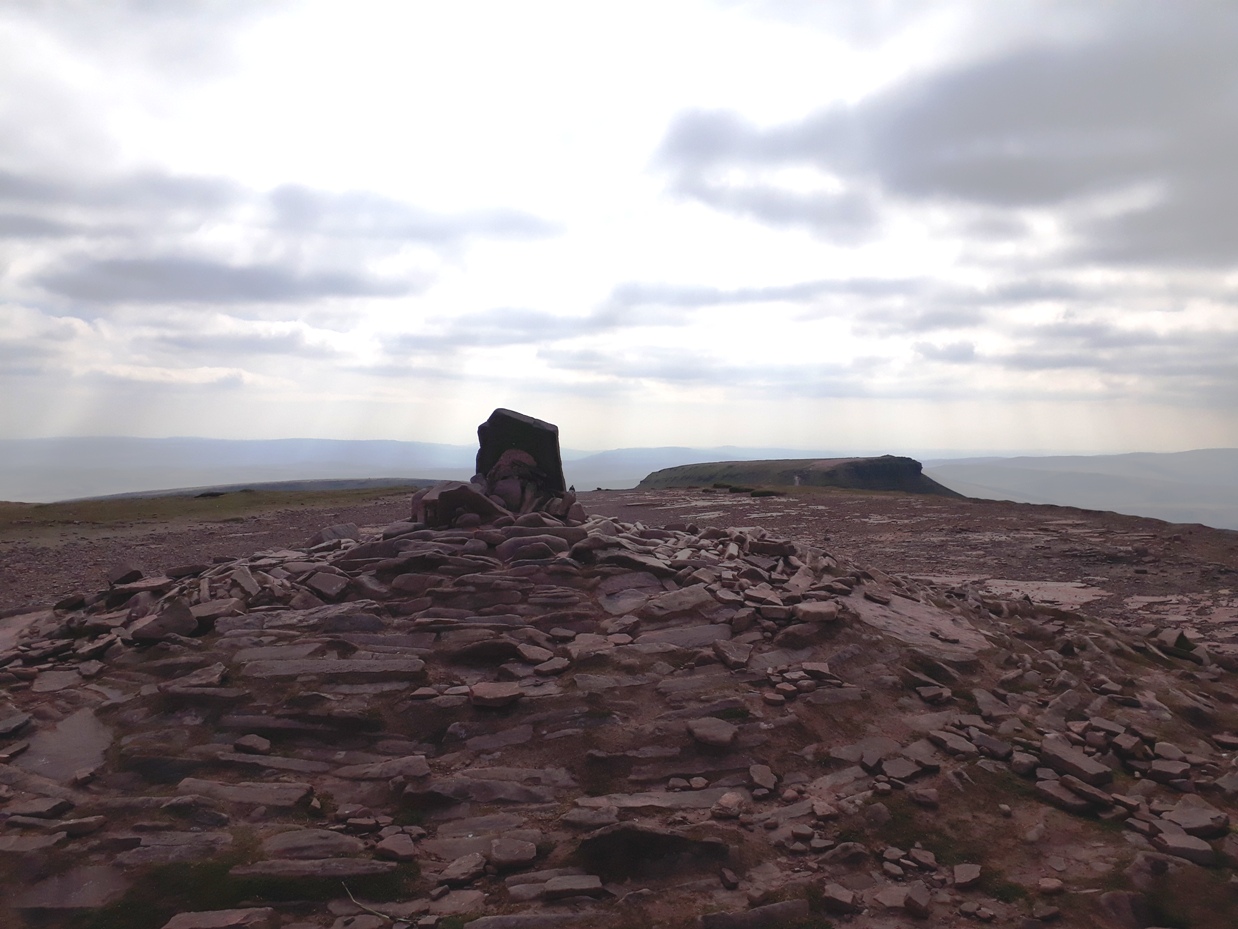 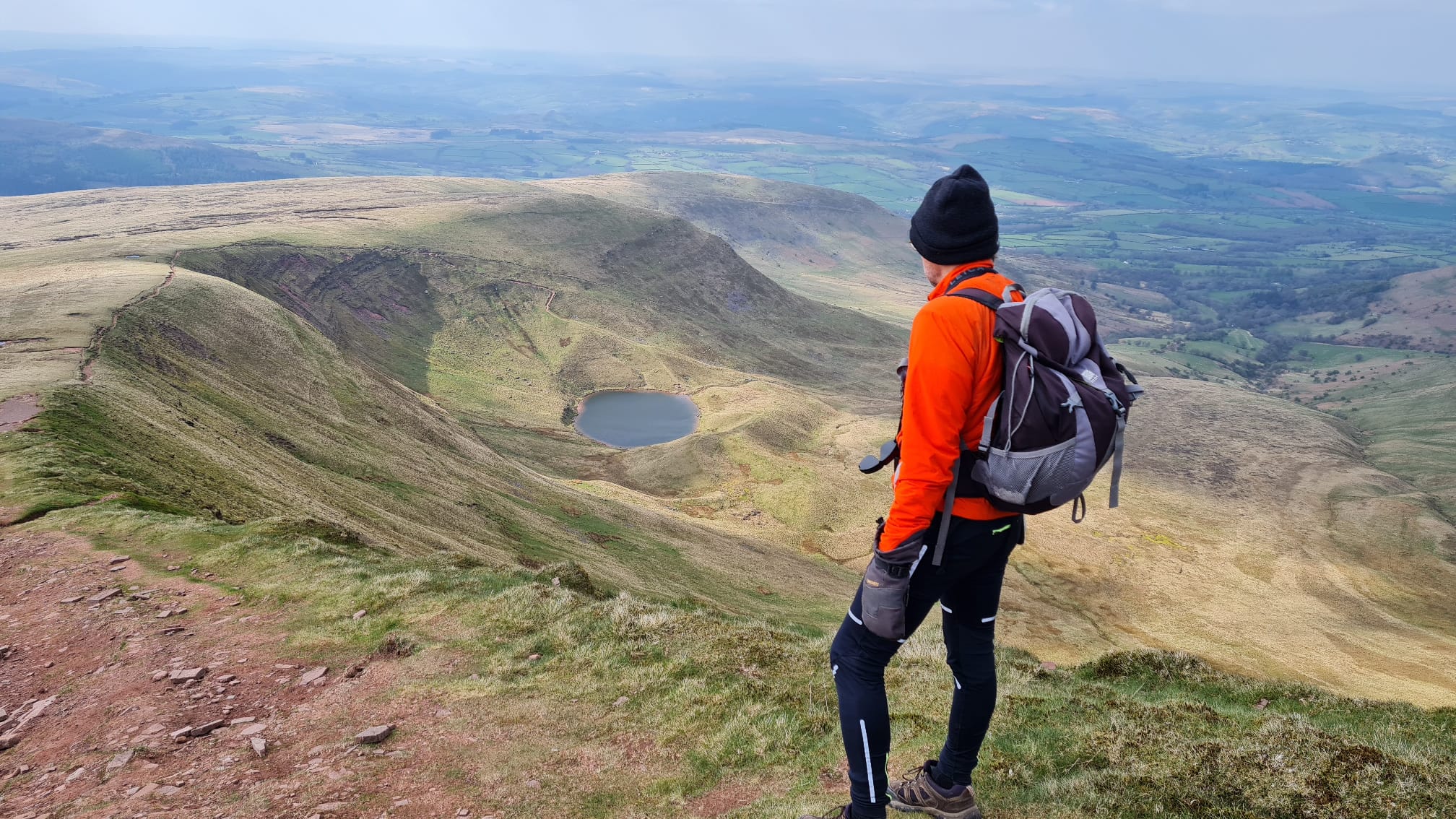 On the way down we pass the Tommy Jones Obelisk, truly a tragic memorial - one just can't imagine what his parents went through. 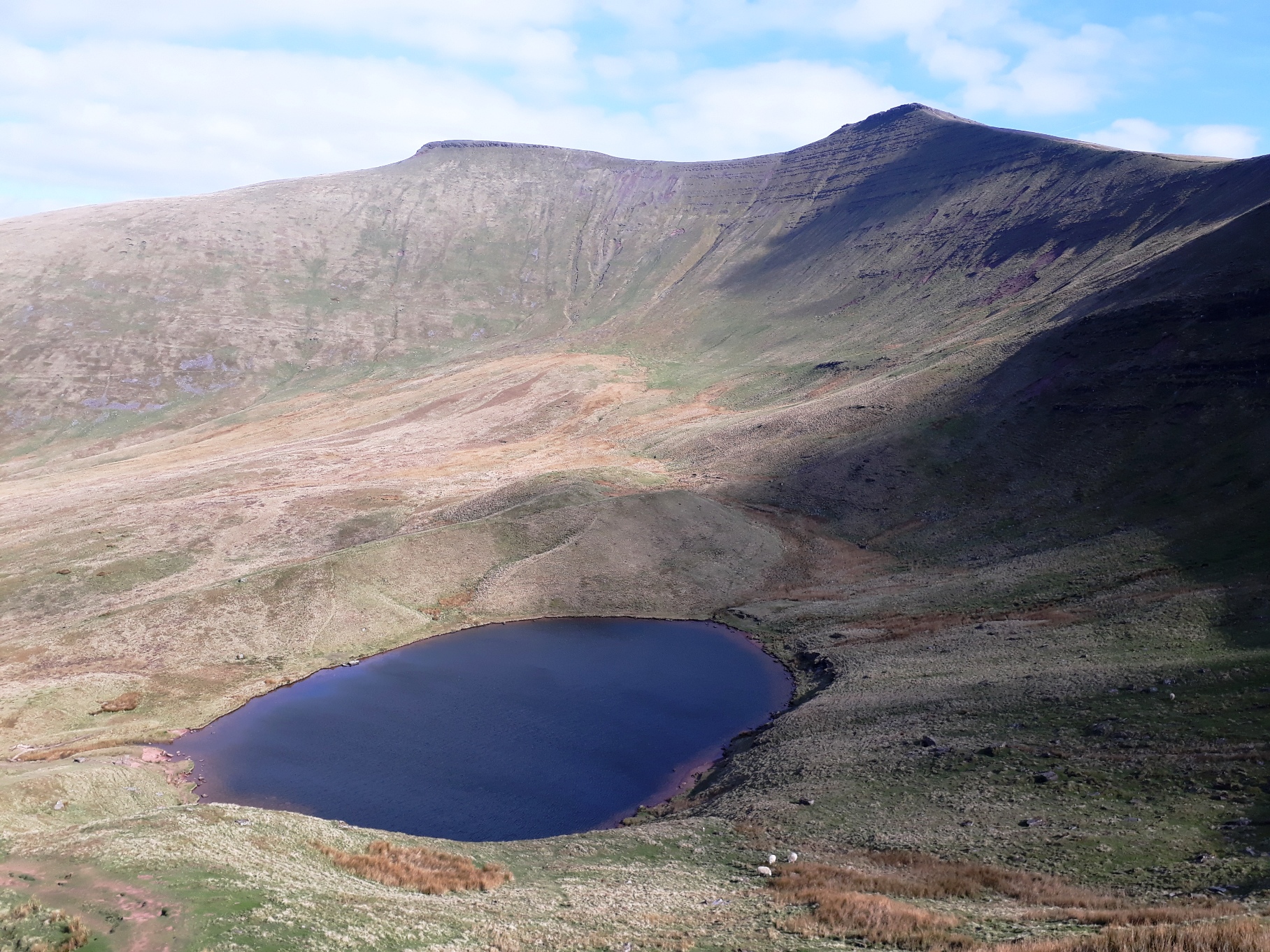 Once down below the Llyn level ... 20220427-170258. ... it's easy downhill walking, first on a path, then, after Cwm-llwch, on a lane which after a kilometre or so joins a single track metalled road. The roads zig zag around as we walk generally east in the direction of our cars, and it's a bit of a maze; but I'm confidently checking the map, and am sure where we are.
Unfortunately, I'm also confident I know where the cars are - and, remember, I think I know where we'd parked them... ...at Pen-twyn bridge. So you can imagine my consternation when we arrive at the bridge, and there are neither cars nor even a parking place. We pore over the map for a while, and eventually realise that the only other wee bridge over a fair sized watercourse in the area is Pont y Caniedydd - about a kilometre back the way we've just come, and which we passed within 50 metres of on our way to the wrong bridge ...

Being the seriously guilty party, I jog back to get the car, and we finally complete our round at 18.45 - a bit late to stop by an establishment of cultural, historical and architectural distinction in order to replenish insensible liquid and mineral loss over the course of the day. But there'll be a next time - if John will ever trust me again


(Squashed round of) Kinder Scout and Bleaklow Hill

An Arans Round of 7 Hewitts

Meet again in Derbyshire after 52 years

Loch Kinord circuit in the snow

Lochnagar in the snow was a few steps too far