This one has been hanging out for a little while. Dr Frank and I had aimed for this - the xxxth Y Garn in Wales - when we walked the other Rhinogs in stunning weather in March 2017; but we had wholly underestimated how strenuous the Rhinogs walk is - right at an outlier position on the bell curve of toughness - and although we aborted our walk for other reasons, I think that in retrospect we would have struggled to get through the very rough ground on the approach to Y Garn in reasonable time. Unfortunately Dr Frank has his priorities all screwed up, and had already committed himself to a week in Lanzarote and so was not available for a head-banging session in Wales...

So it was the usual solo affair.

The original plan had been to go on from Y Garn to Dyffwys, mainly to check whether there really is a cairn there - which we managed not to see in 2017! But it took so long to descend through the overgrown boulder field on the west side of Y Garn that once I got to the decision point - onwards, or cut the planned route a bit short? - I (correctly) judged that there was insufficient daylight time to complete the originally planned route (via Cae Goronwy), and so cut off a chunk of the western end of the route - which turned out to be a good decision, given that I didn't get back to the car park until 15.50, when it was already pretty dark.

This was the eventual route. 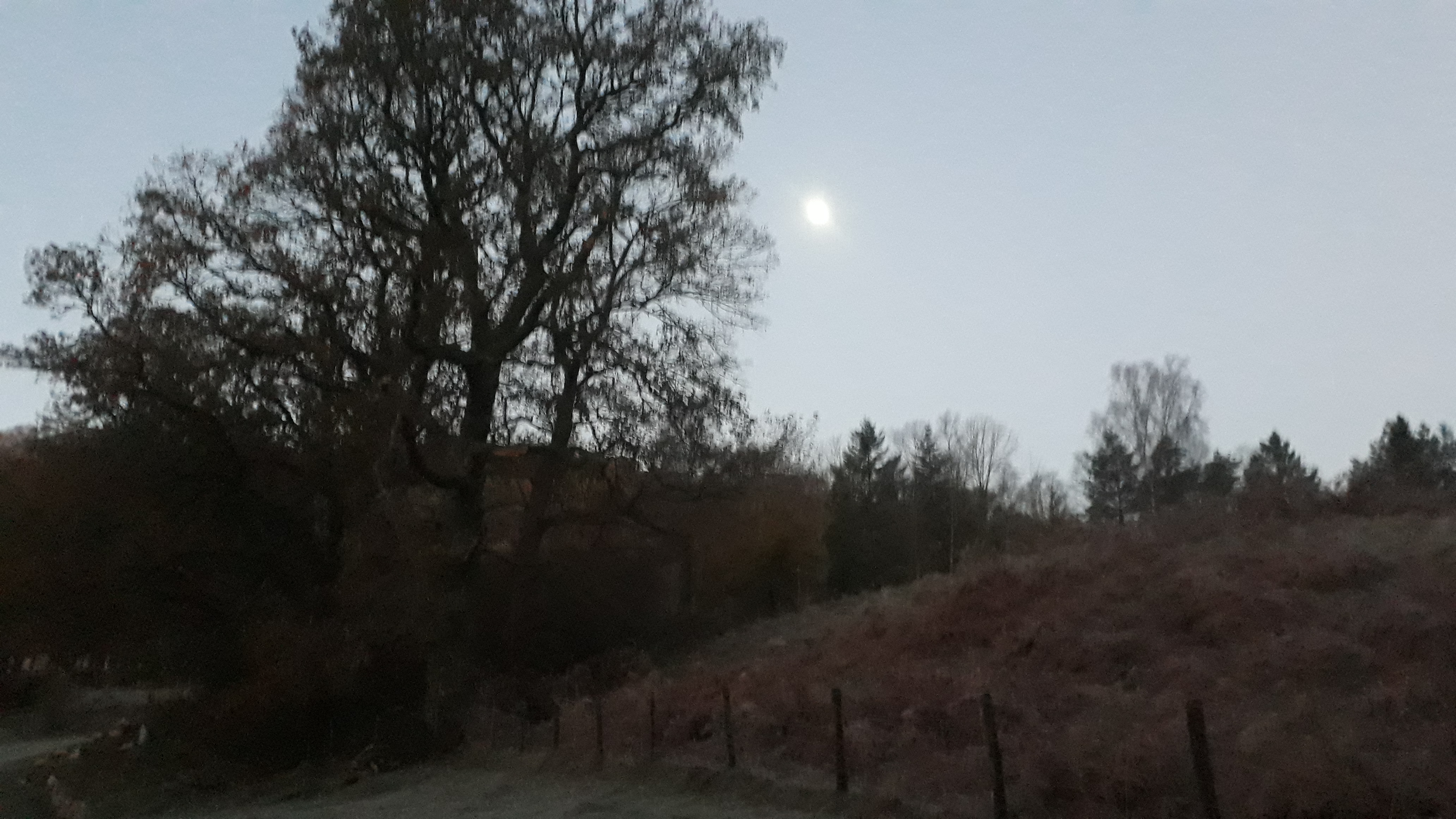 20211122_072125. I am a bit overenthusiastic with my starting time, and so it is still relatively dark when I arrive at the planned start point just south of Ganllwyd. 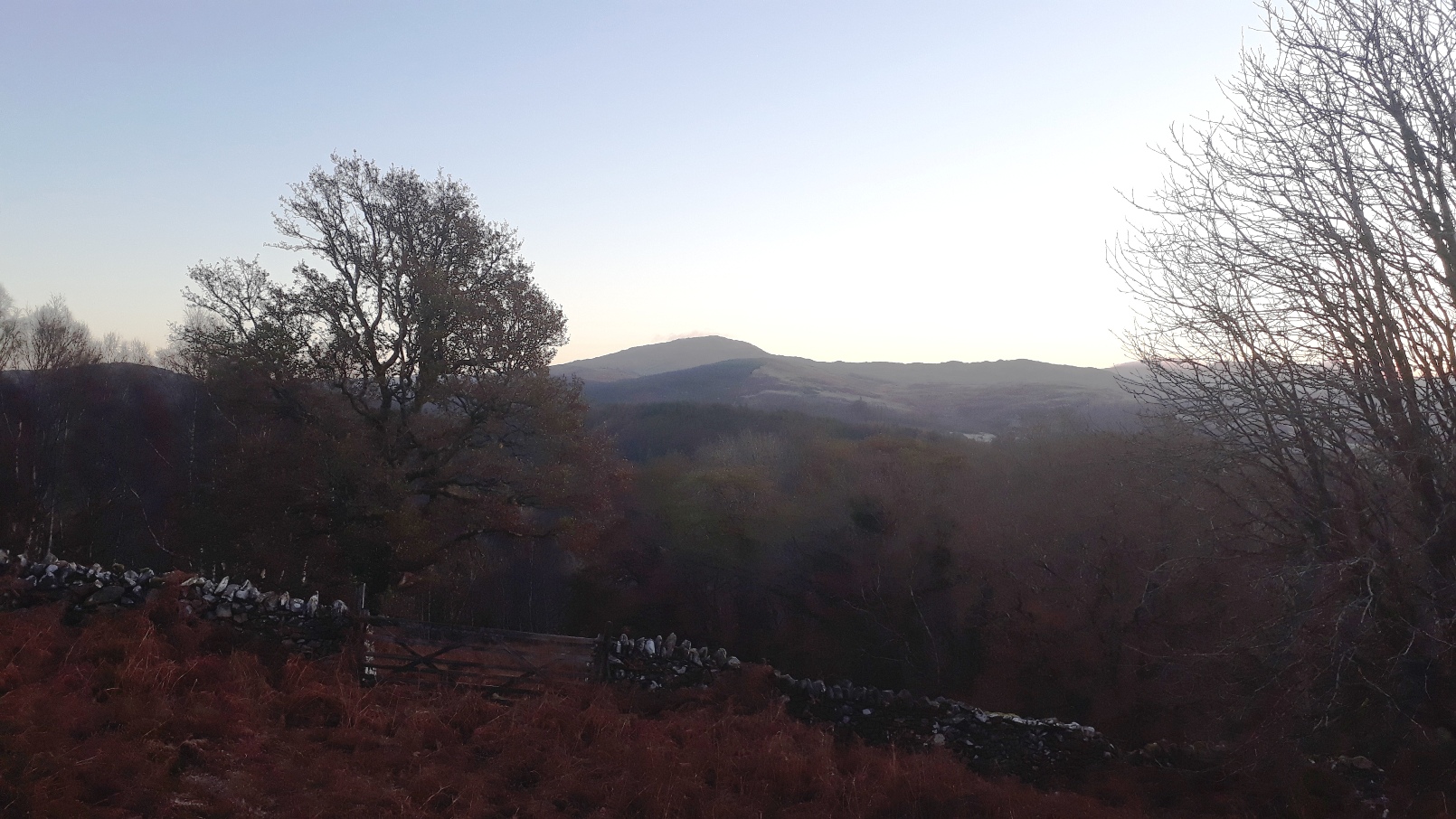 20211122_080011. But by the time I've kitted myself up, munched a bit of breakfast, and get underway, the sun is poking up over the hills. Rhobell Fawr in the background. 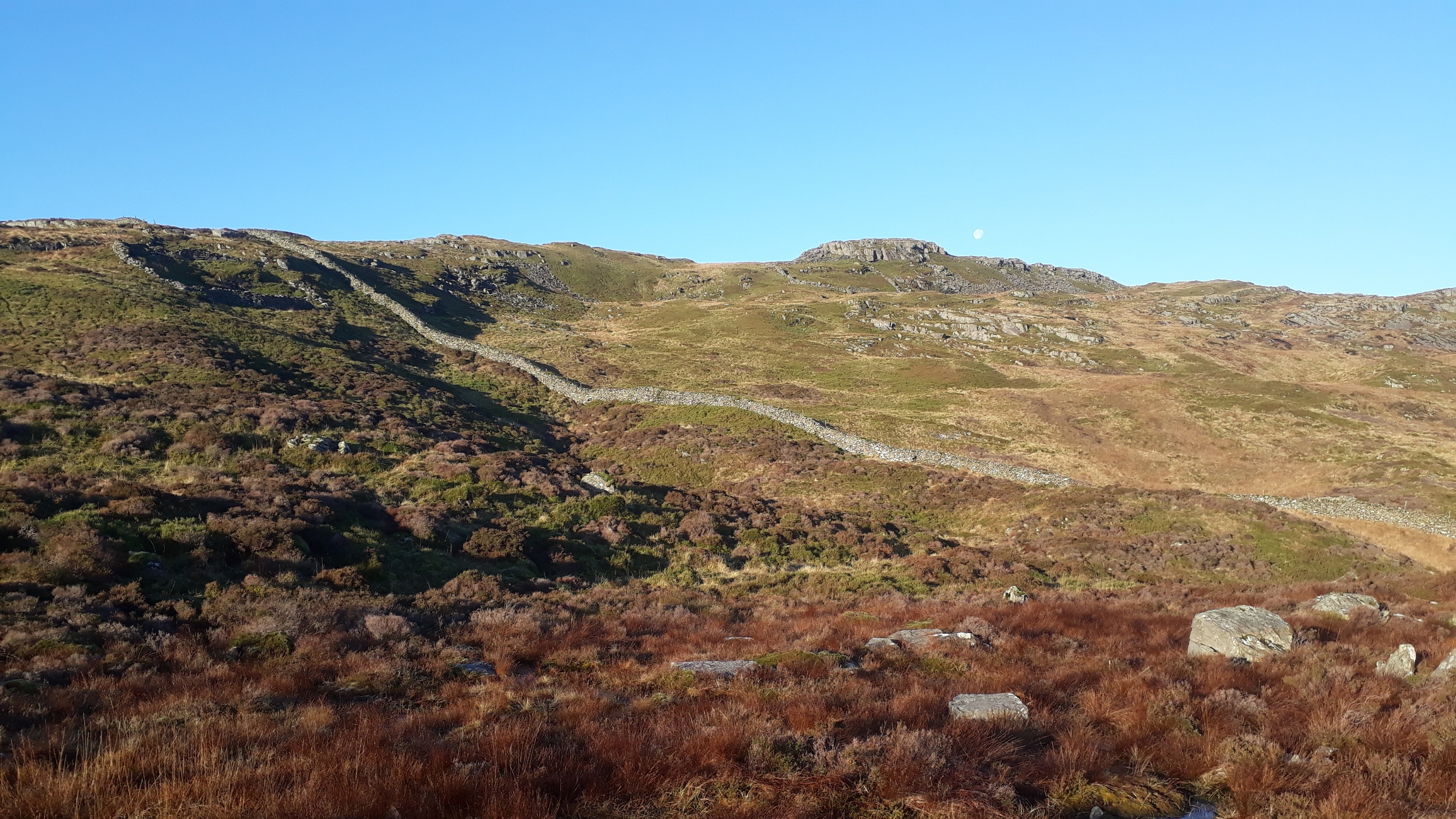 2021112_091313. After a short walk up through the woods there's no direct route in the direction of Y Garn - West; the path continues perpendicular in a southerly direction - so I cut off directly up the hill, taking my line from the wall. It's relatively straightforward going - a few stretches with deepish bracken, and a wall to scale, but OK. Then, just a long, none-too-steep ascent across rough pasture. This pic is looking towards Bryn Bedwog, the cliffs that conceal Y Garn. 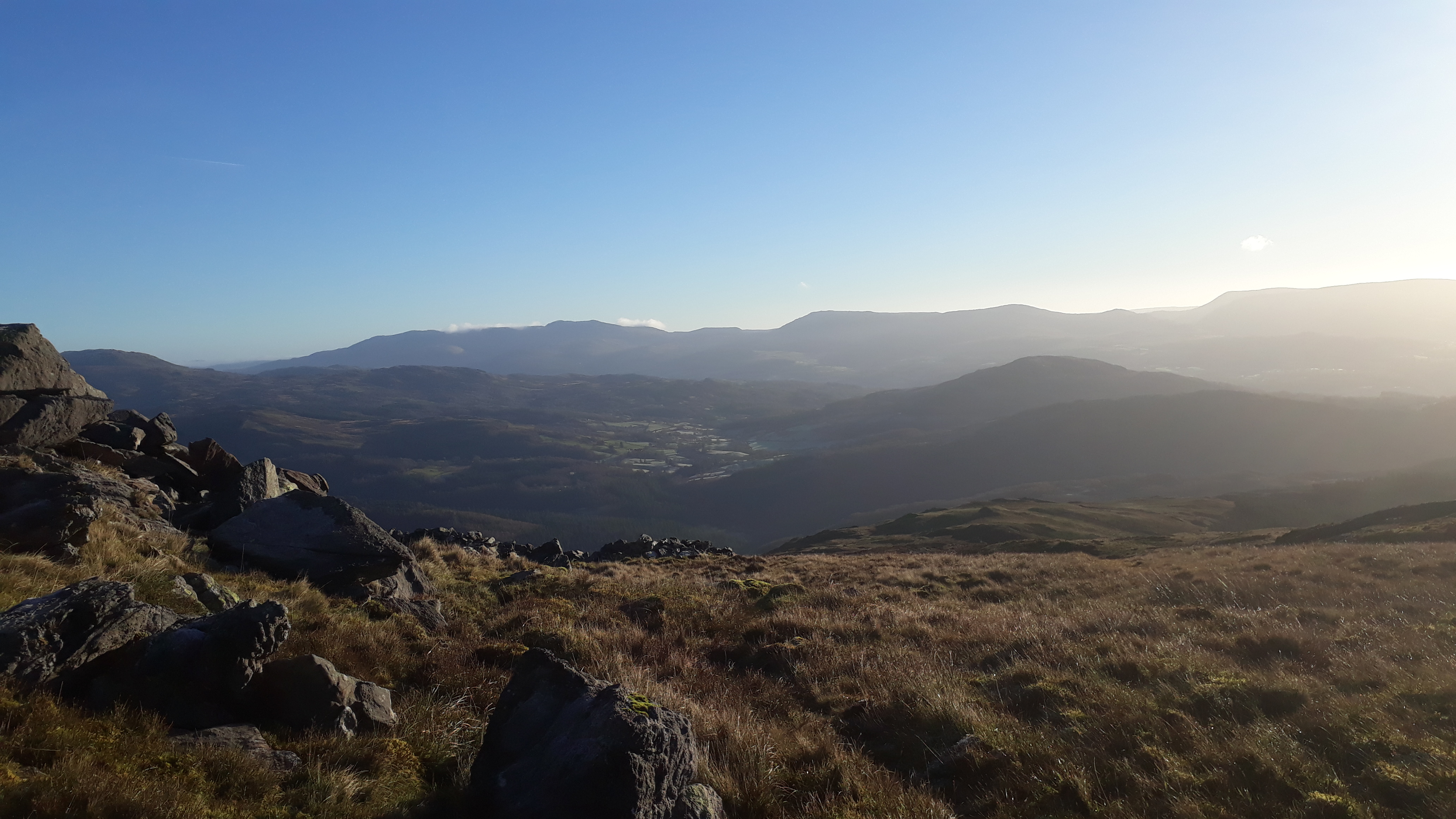 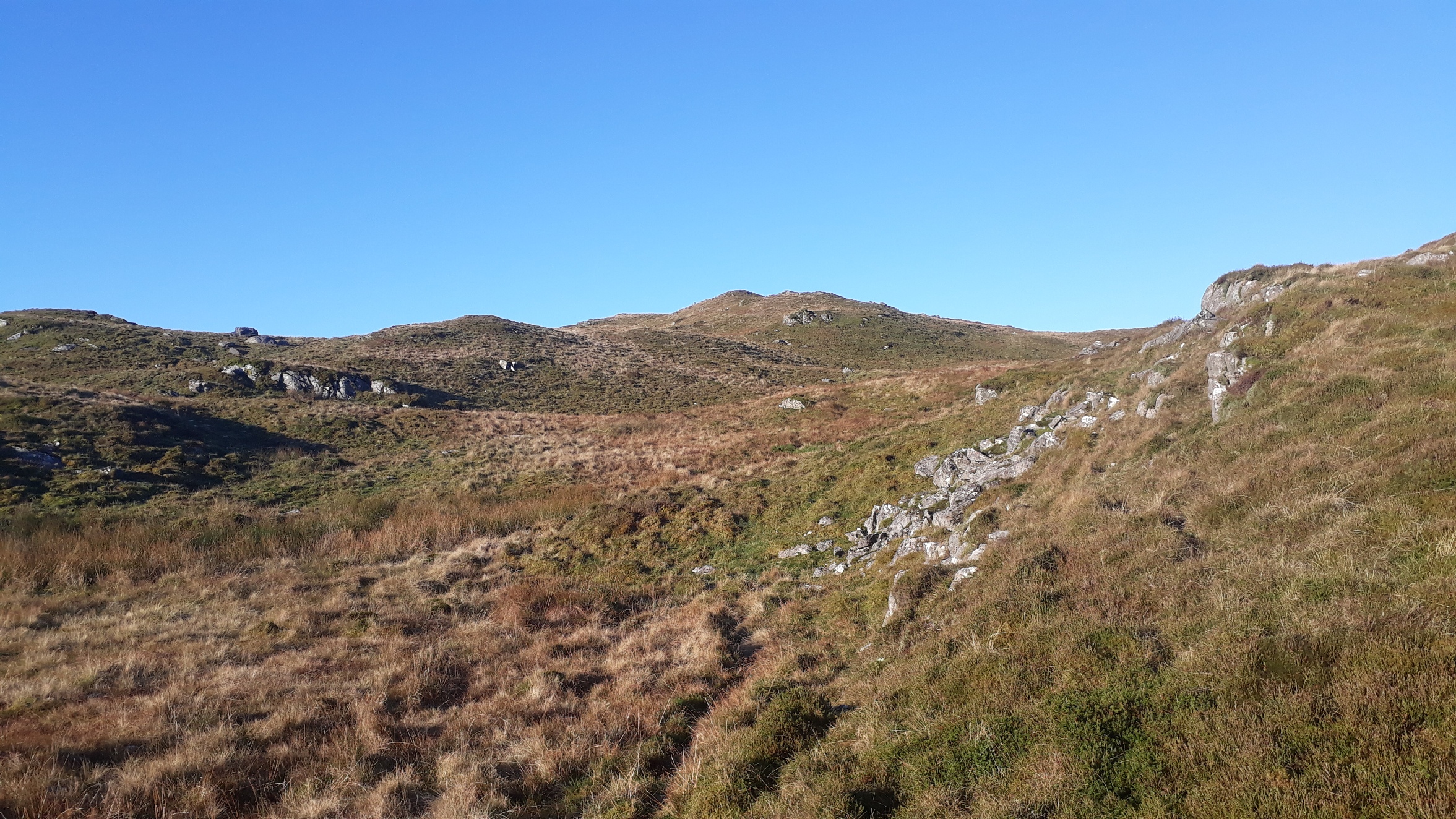 At this point I should probably have studied the map with a little more care. From the convex summit the descent terrain is not visible, so I just head downwards in the desired direction. Which turns out to be something of a mistake, because there's a long stretch of steep descent through overgrown boulders ranging in size from 10s of kilos to many many tons. And which therefore takes an absolute AGE to get down safely. 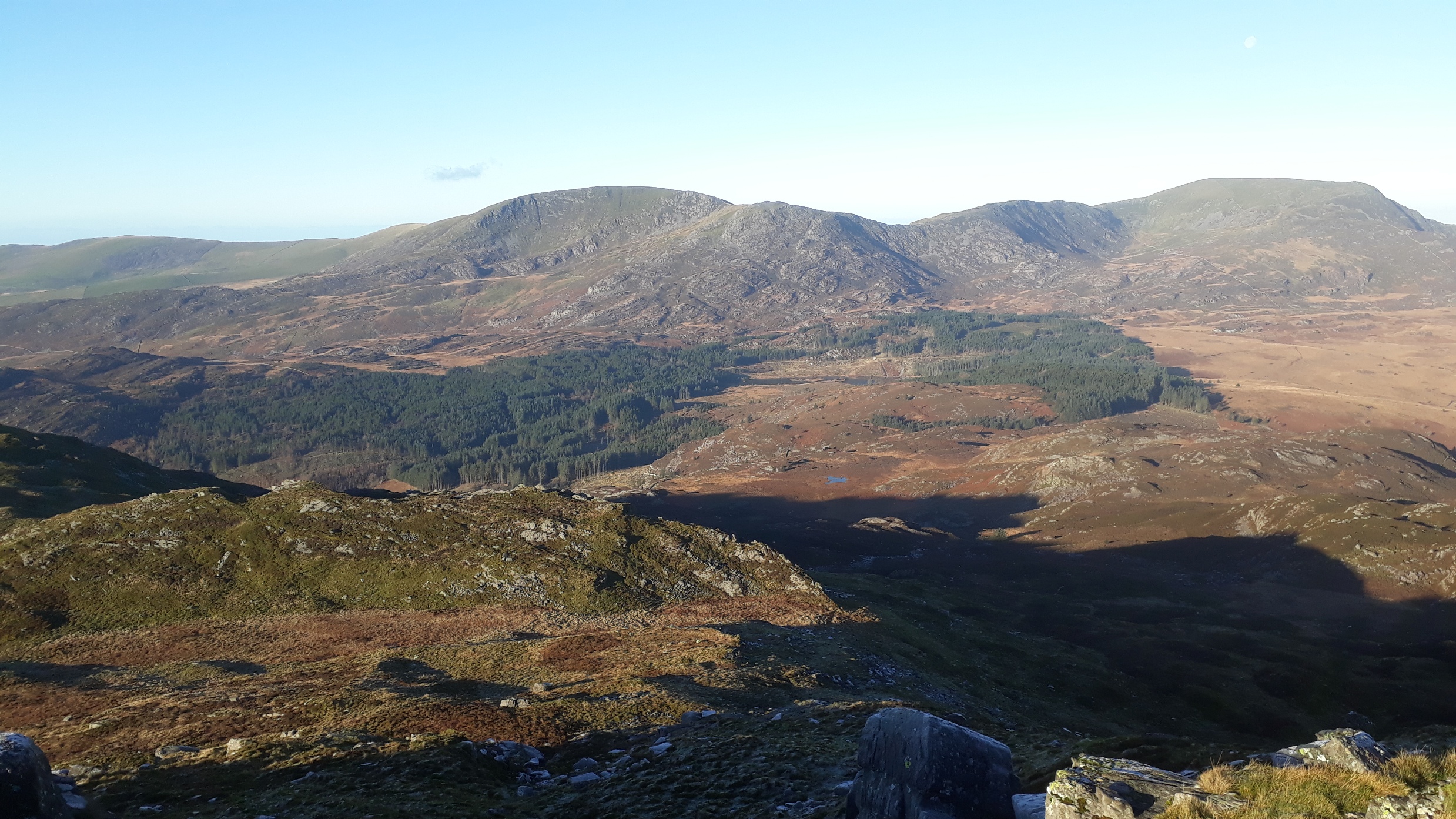 . This is looking back once I reach the bottom. And it's clear that if I'd taken a bit of a diversion to the North before heading west (LHS of the picture), I'd have been able to get down in 10 or 15 minutes rather than the hour it actually takes 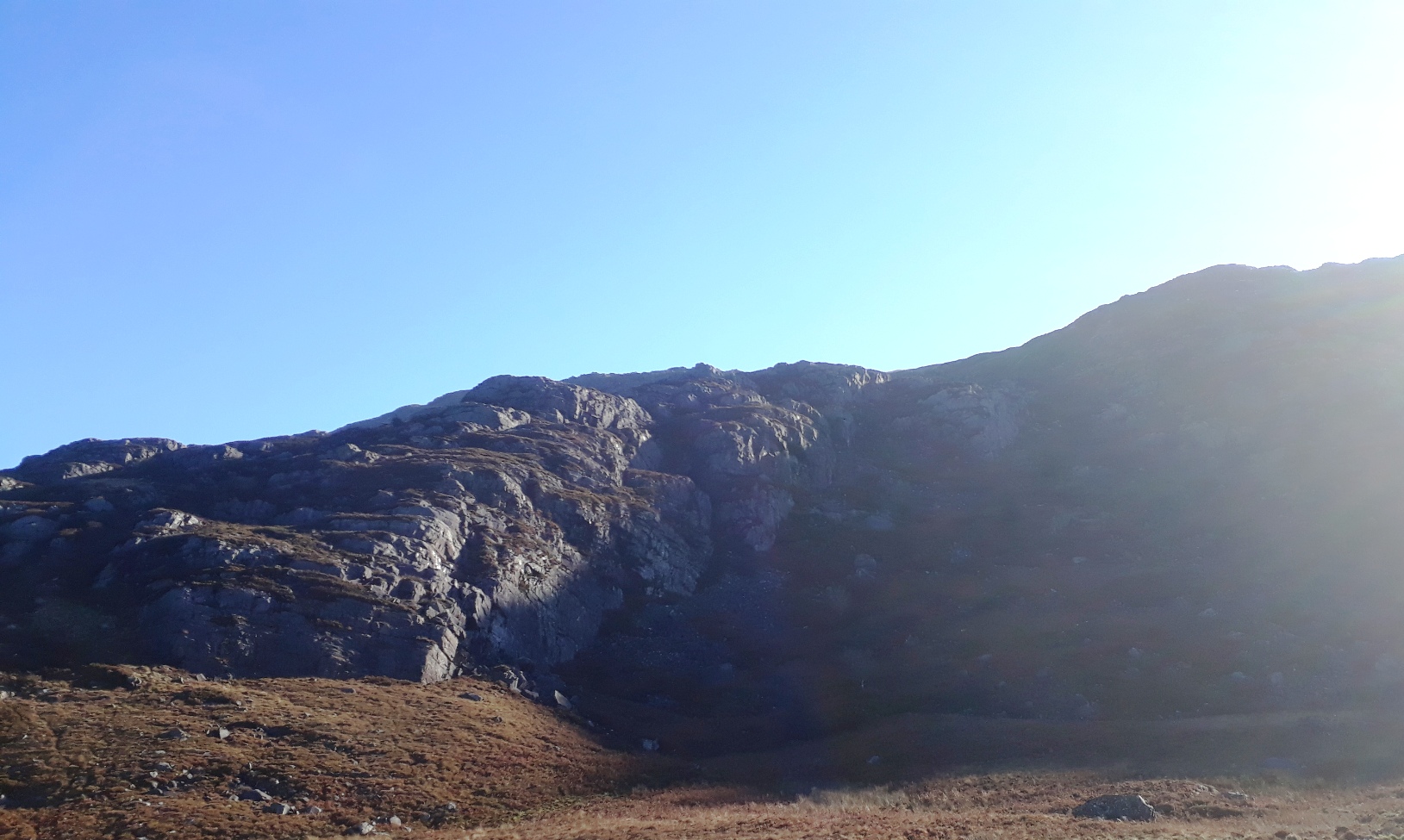 Once down at the plantation, I take a rather circuitous route following various paths and tracks that zig zag through the trees, aiming in a generally westerly direction, but which I'm quite sure is a lot quicker than trying to yomp through the trees (forestry and I have never got on...). 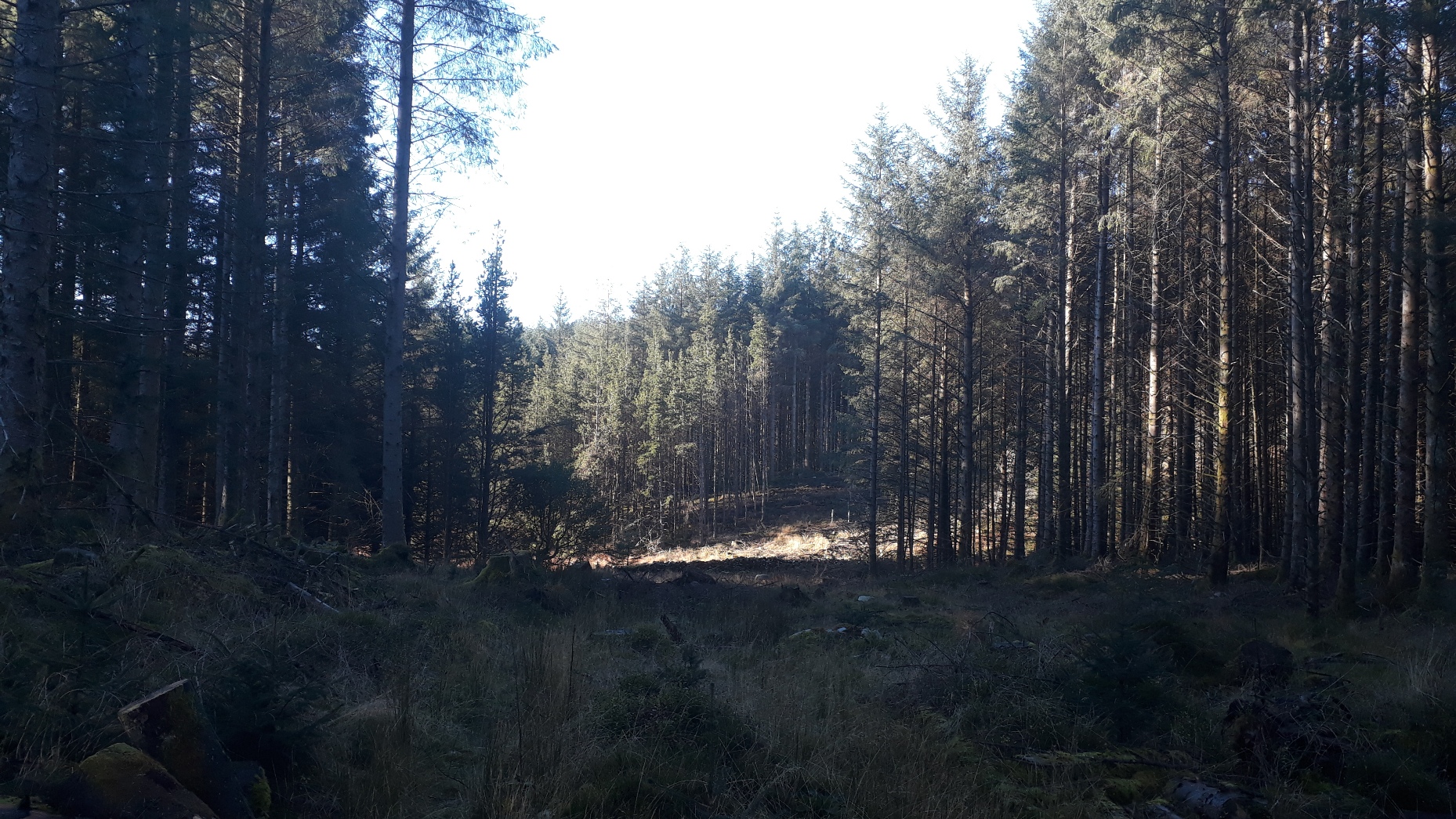 Once I hit the forestry track to the west of Blaen-cwm-mynach, I stop for a bit of lunch 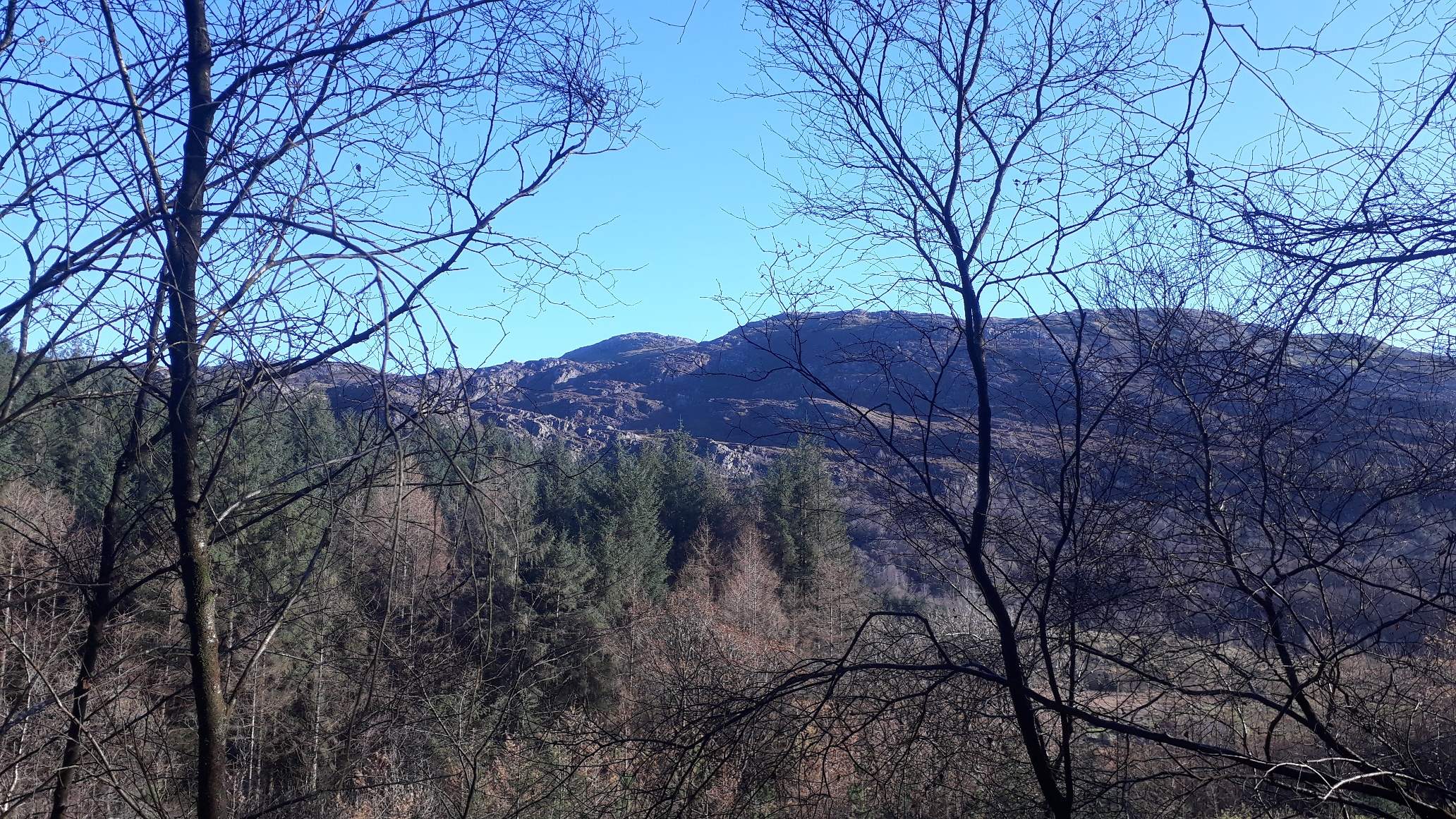 Munching on my sarny, I weigh up whether there's time to take in Dyffwys; and quickly conclude there isn't - at least not in combination with getting back to the car before nightfall.

So I head south down the main forestry working track with the aim of turning east a few kilometres down, where the forestry ends.

So why on earth does it take an hour to walk the two and a half kilometres to the direction change?? Because in order to limit walking on the foresters track, I spend an age looking for a path shown on the map that I eventually realise IS NO LONGER THERE. 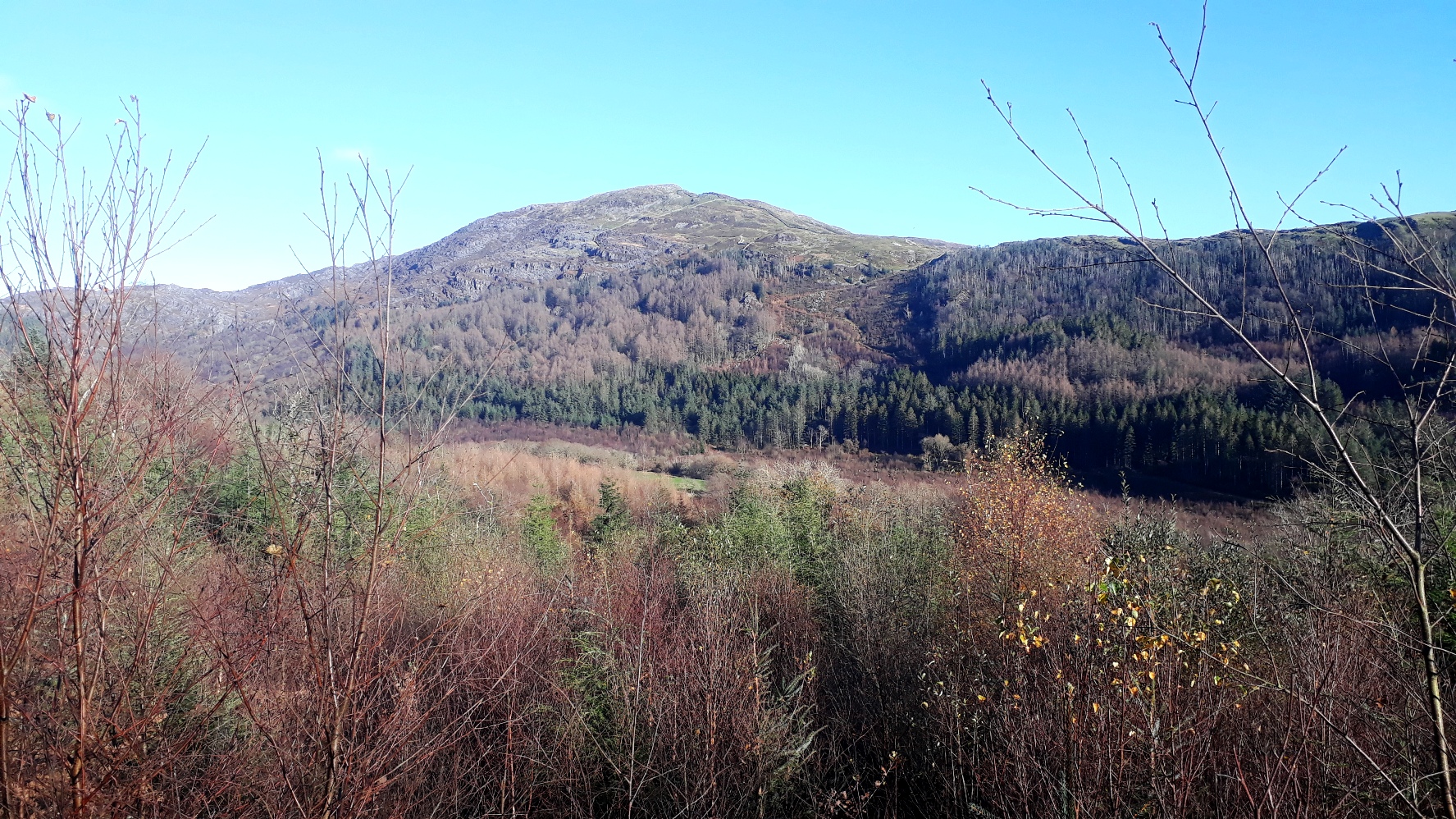 2021112_123815. But eventually I do get to the point lower down the valley where the forestry ends, at which point I turn east to follow whatever paths there are heading in a broadly easterly direction - which means a rather meandering but quite interesting route. 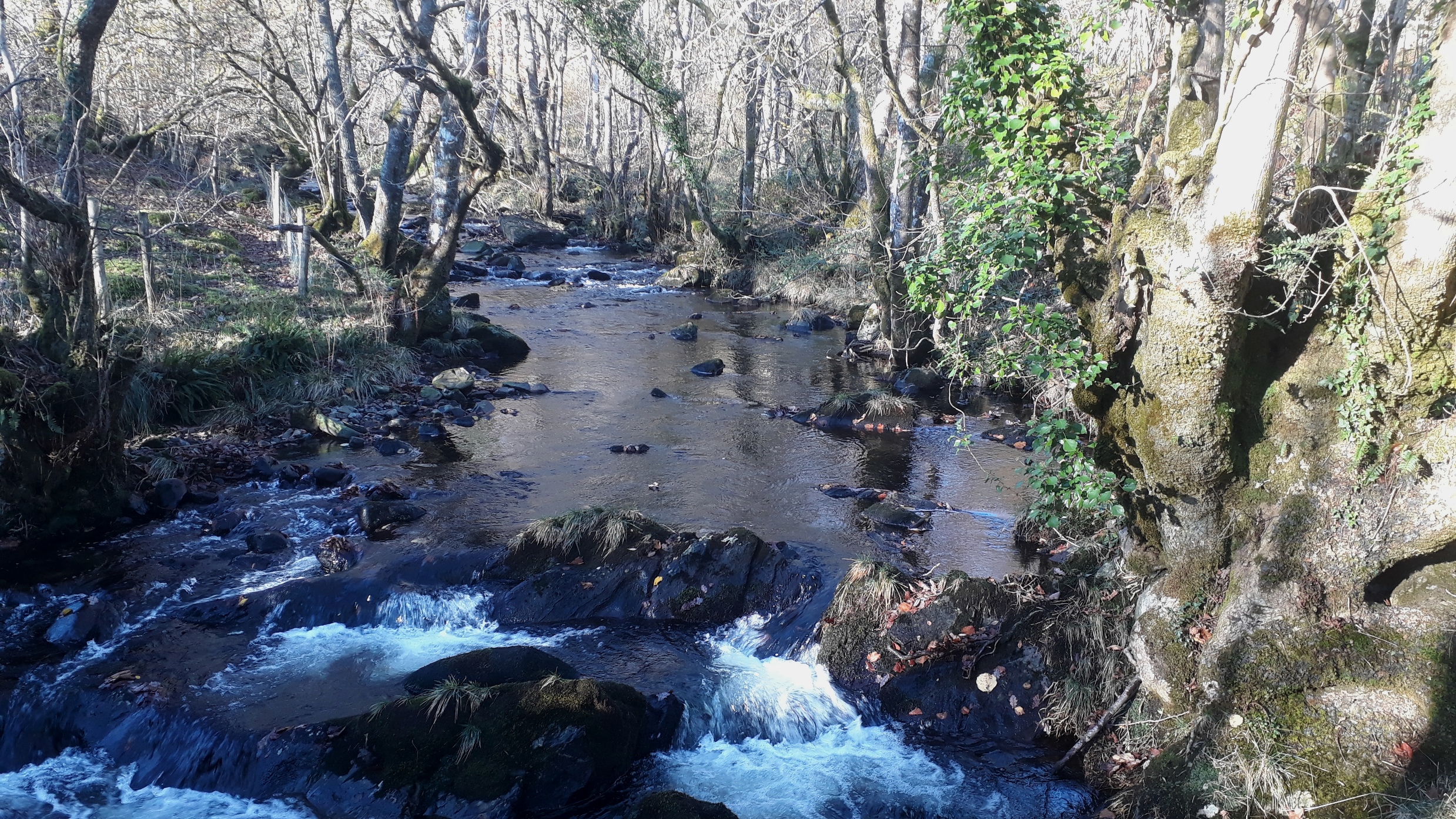 2021112_130414. For example this attractive stream viewed from the little bridge near Pont garth-gell. 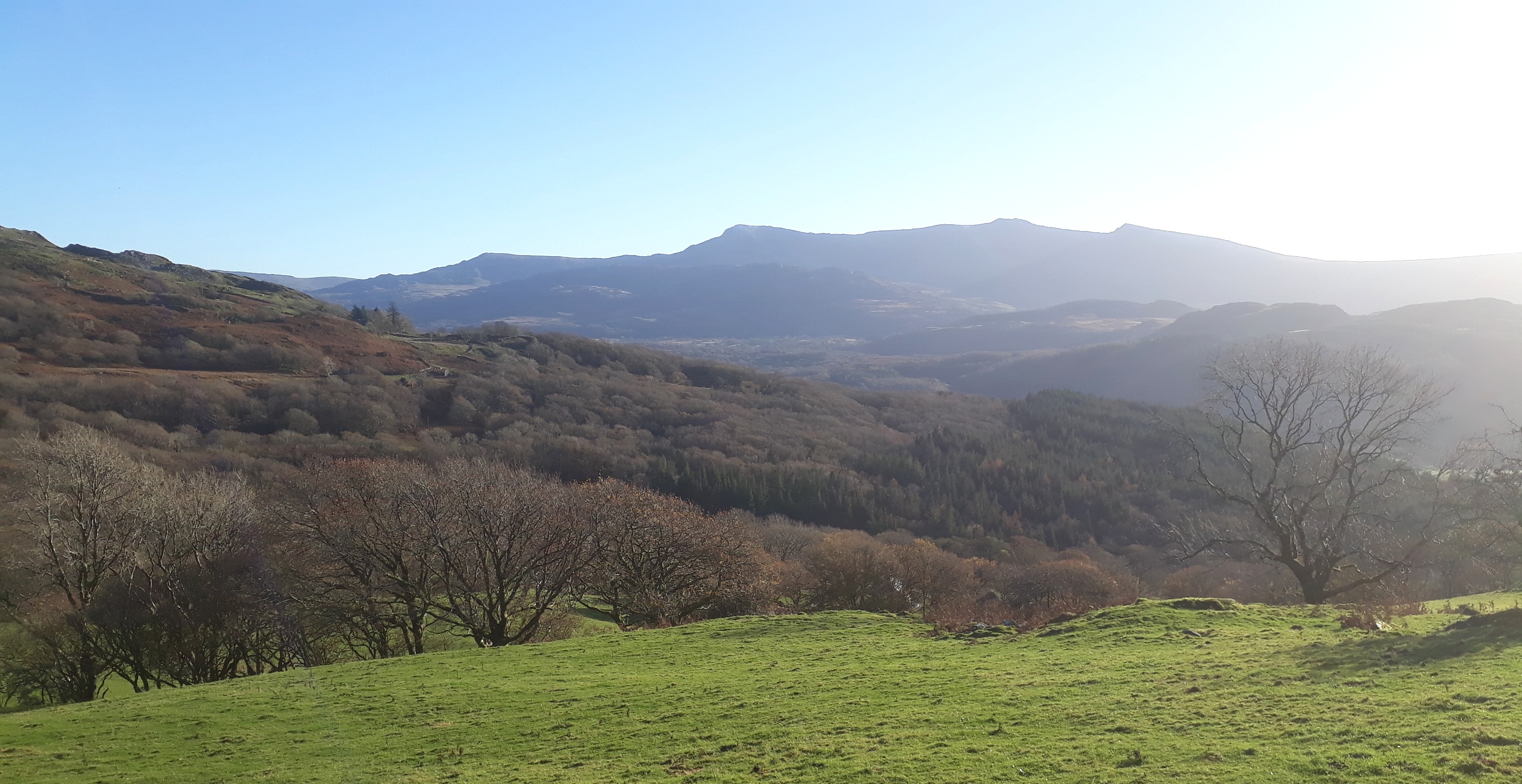 2021112_133024. This looking somewhat south of east near Cesailgwm Mawr towards the Cadair Idris group.

I get back to the car shortly before 4 o'clock, when it's already pretty dark down in the valley, and I'm glad that I didn't include a visit to Dyffwys in the itinerary.

A somewhat unusual route for me, in that it only encompassed one top, but very enjoyable in the superb winter weather, and affording great views of the Rhinogs. 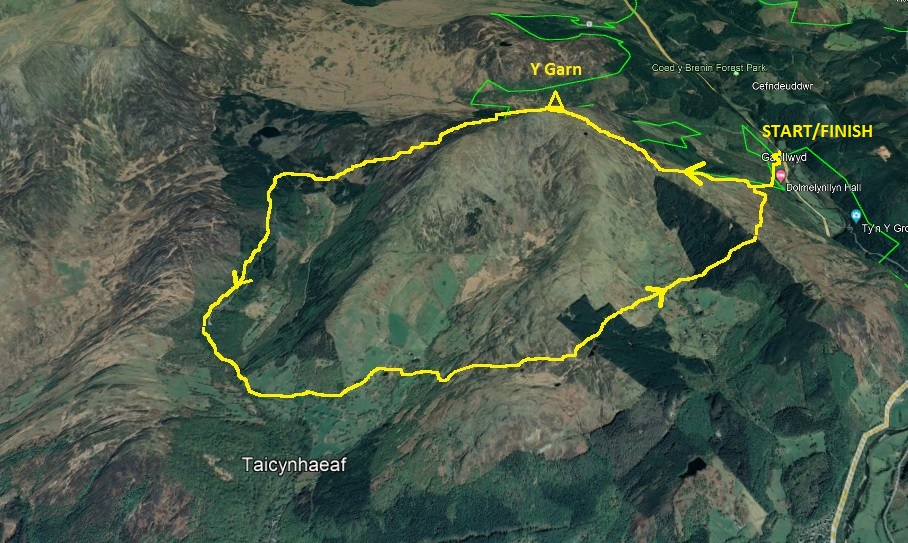 3D view of route
Click to mark this as a great report. Register or Login free to be able to rate and comment on reports (as well as access 1:25000 mapping).

A Talybont round - the long way to Cefyn yr Ystrad