After the Farrago on the Hill,Dr Duncan and I part ways, and I head for Beinn a'Ghlo, the starting point for which is only 10 miles or so away. My plan is to camp next to the parking spot shown on the map towards the end of the "road" to Monzie; but when I get there however it seems that the farmer has just delivered a whole herd of cattle into the adjacent field, and not only are they making a tremendous racket, but only a cattle grid separates the parking area from half a dozen young and very curious little bullocks. No matter, I think; no doubt they'll calm down after a little while. So I locate a reasonable flat spot, and drop my tent there. I turn around to unpack some other stuff, and - lo and behold, a calf is on MY side of the cattle grid! How the heck did it manage that????!!! After a few minutes consideration I decide it isn't worth risking a visitation from who knows how many bullocks some time in the night.... 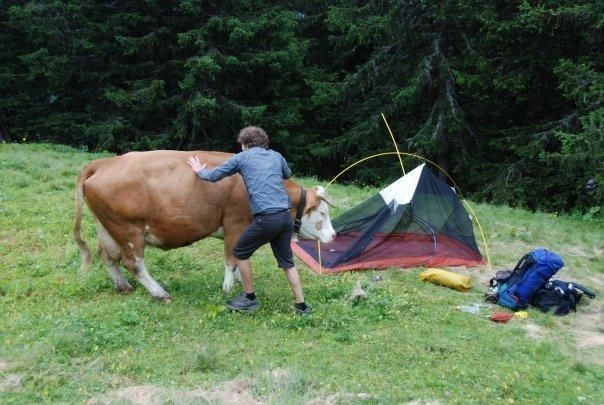 ...so I put my stuff back in the car, and turn it round with the intention of finding another camping spot back along the road. Of course the calf stands right where I want to drive, next to the cattle grid. What to do??? I drive very very slowly forward, and as I approach the calf it turns towards the cattle grid, examines it for a few seconds, and then, very carefully, very deliberately, one foot at a time, walks back across the cattle grid!!! I have to say, I've never seen that before!

About 1 km back along the road there's another small layby just beyond another cattle grid (grid ref. 898669), adjacent to which is a slightly elevated lump with a flat spot on its top which turns out to be an ideal pitch, not least because there's a stream just 100 or so metres away. Once the tent's pitched, and my gear stowed, I warm myself a dehydrated chicken tikka rice, swallow the contents of a can of Nanny State, and then crash to the sound of a pair of tawny owls exchanging calls in the adjacent wood. And it's not even 8 pm!!

I'm awakened nearly 11 hours later by the distinctly unmusical alarm call of "morning flower" on my mobile. It's still dark, and though I'm as warm as toast (lovely Exped winter mattress

,) it feels as if it's pretty cold outside. And it is: the tent is wholly covered in frost. I don't seem to be able to move quickly, and there's an age of faffing before I've , got some lunch made and packed, downed some breakfast, struck camp and am on my way back to the car park.

I've no reception, but the forecast from last night was for it to be overcast and cloudy, but with good visibility.

Route: For no very good reason I've planned to walk the hills clockwise, with a vague idea of returning by dropping off the east side of Airgiod Bheinn, and picking up the path that runs ENE/WSW down the glen of the Allt Coire Lagain. But on the way I met some folk who said they done this route some year ago, and it had been extremely boggy, but that they had been told by a friend who’d recently walked it that the path running south down from Bealach an Fhiodha had been upgraded, and now was easy walking. So I decided to take this route, but easy walking was not not quite what I discovered

After a short section of reasonable path, there's a long stretch – probably one and a half km - of peaty bogs kept soggy by streams running down the hillside every 50m or so and crossing the path.

But I didn't know that at the time, so this is the route I took. I have to say, too, that it looked like quite a decent ridge route on the OS when I was planning it, as indeed it turns out to be.

It's a serious faff morning: somehow I don't get going until after 9, and then discover, a km or so up the track that I've left my phone (= camera) on the car roof...

Eventually, though, I am moving in the right direction. 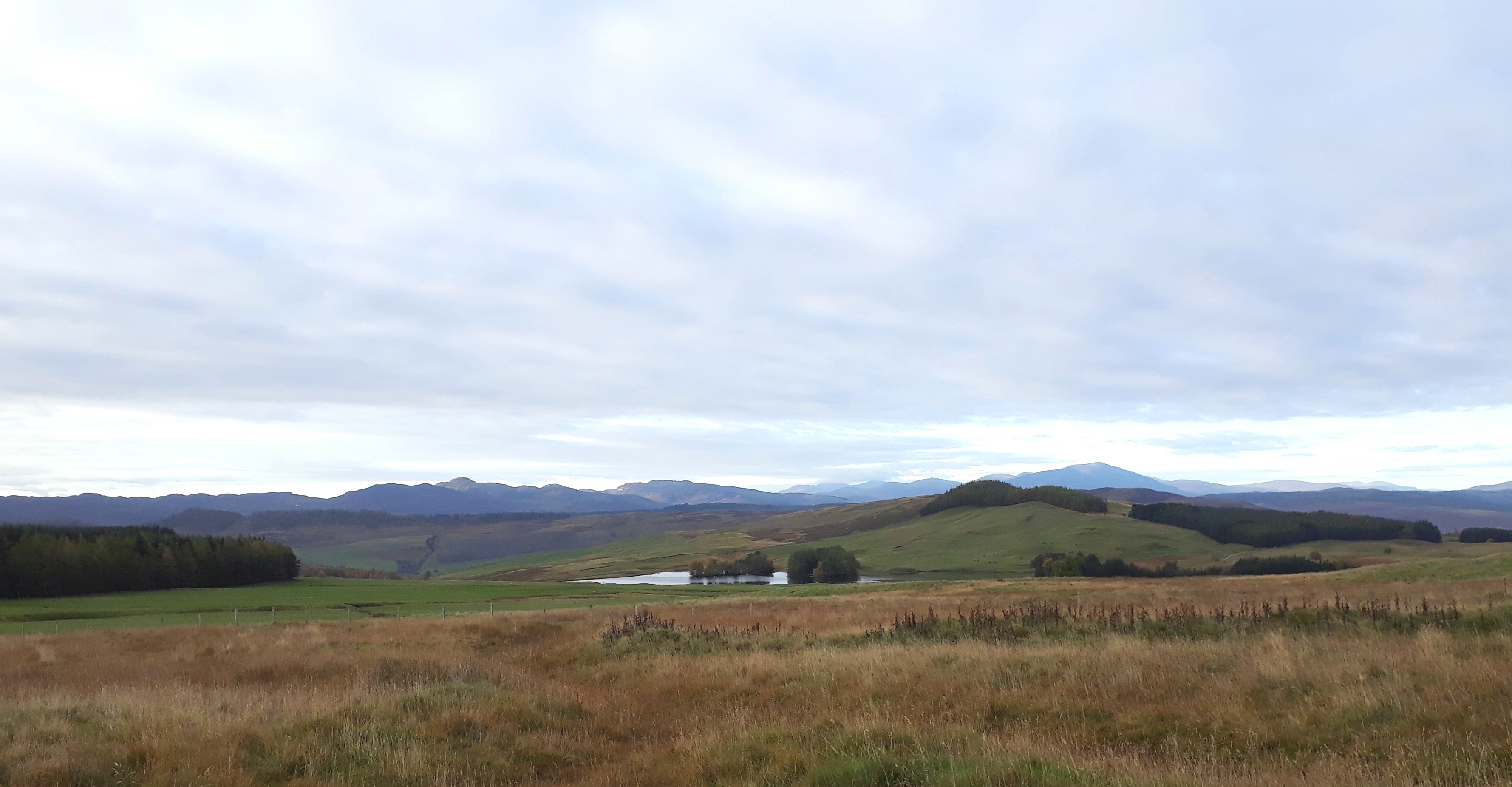 20201015-092532. Nice view from the track looking back towards Loch Moraig, with - from left to right on the skyline: Farragon Hill, Meall Tairnaechan and Schiehallion (and, I suppose, in the very far distance, the Lawers hills).

20201015-093703-0. Ahead the M181 up the front of Carn Liath is really quite an eyesore. Oddly, once you get on to it, it doesn't seem visually that bad. I think it stands out so starkly because either side of the path a lot of white stones have been exposed. 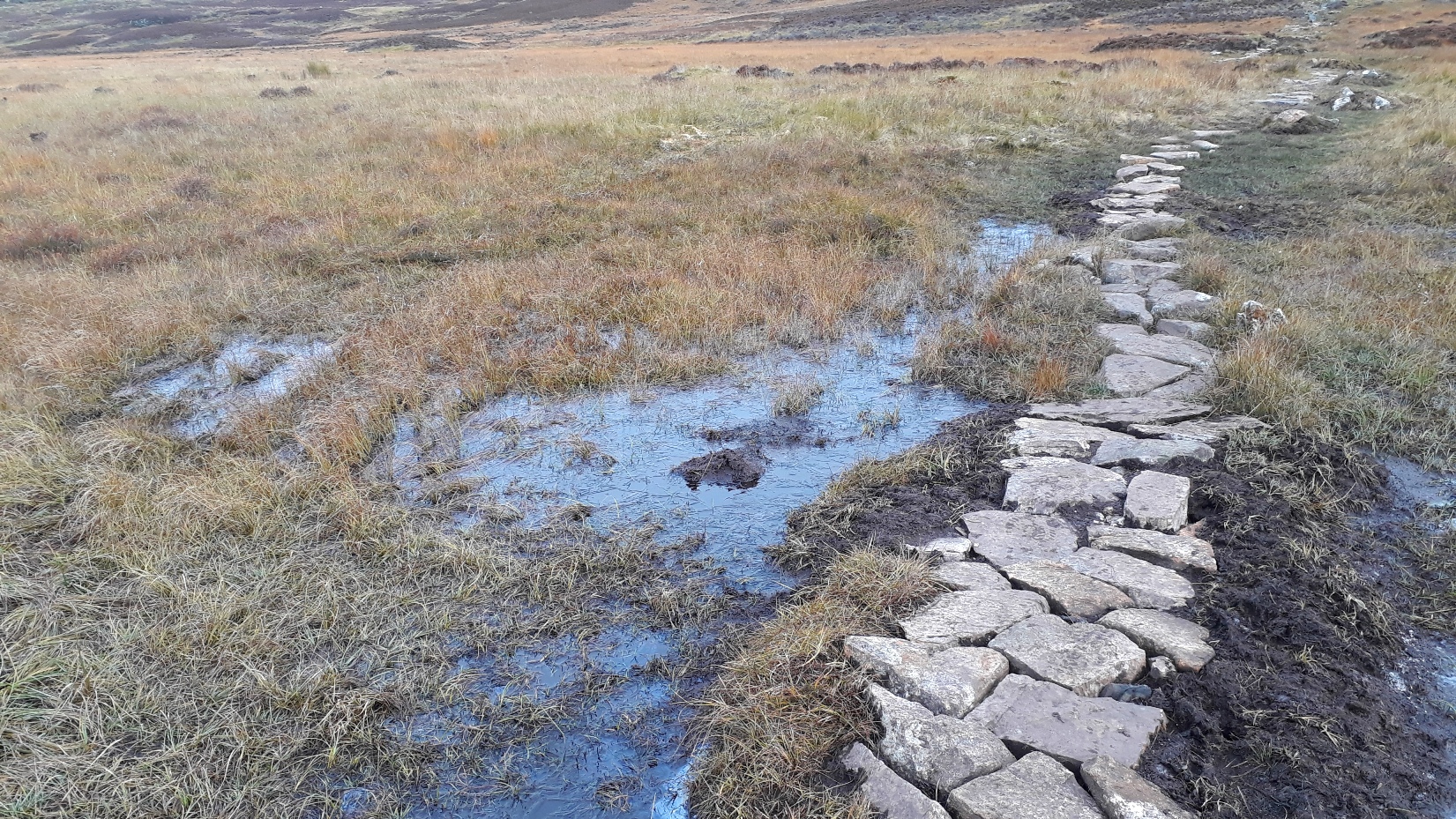 20201015-093807. Nice that one doesn't have to start the walk with wet feet. Temperatures in the night clearly dropped below zero here also.

I do go on over much about the effort of getting up hills these days. My excuse is that it’s hugely frustrating having been reasonably fit for my advanced years suddenly to find that I need to take a breather every couple of hundred paces or so. (The next day, I am passed by a 6-year-old on the ascent of Meall nan Tarmachan!)
Still, I keep telling myself that most folk with my condition literally cannot walk above 15 paces on the flat without stopping for a breather, so I really must stop whining...

And in fact, most of the time it doesn’t really disturb me. Once I’ve accommodated to the fact that I need to scale back on routes I planned more than a couple of years ago, I can in practice just relax (almost!) into the pleasure of just being in the hills. 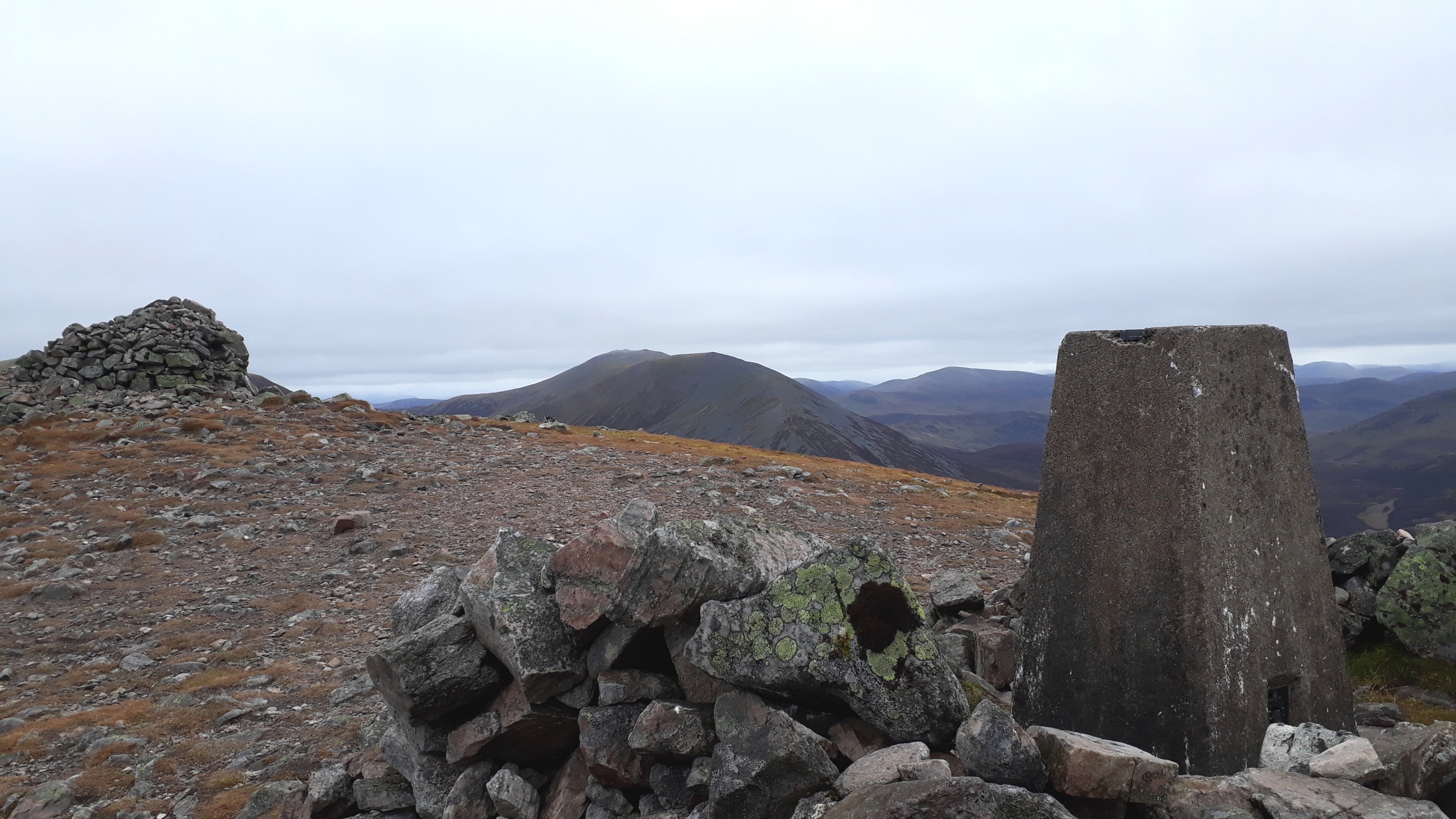 20201015-112522. I have a wander around the summit area for a quarter of an hour or so. Notwithstanding the rather grey day, the views are pretty fine. These two pics are looking along the ridge to Braigh Coire Chruinn-bhalgain. 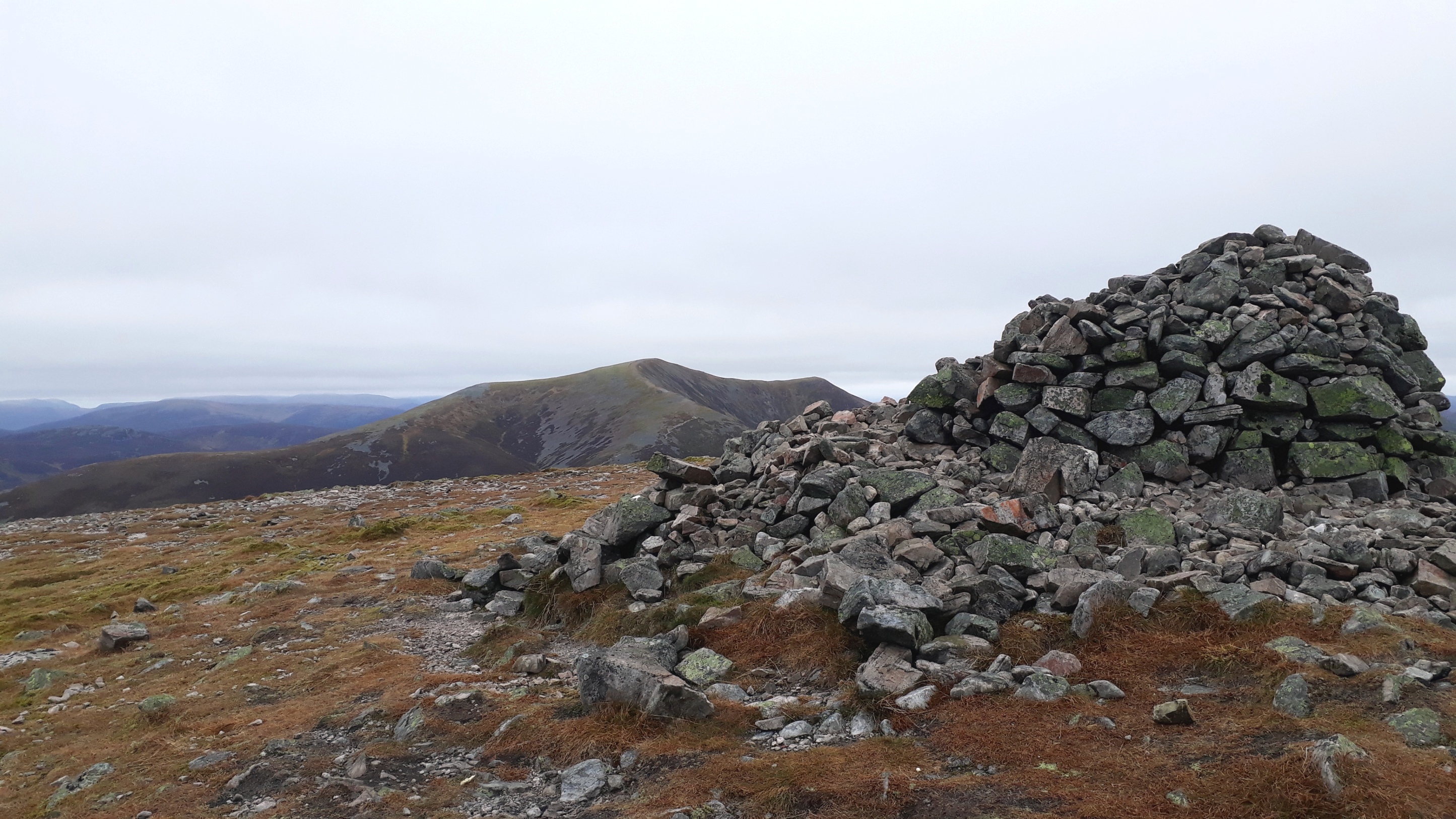 20201015-114358. Onwards - and the view of the ridge really does open up. Lovely easy walking initially - which belies the fact that there's still a drop to Coire Chruim followed by over 450m of ascent to Braigh Coire Chruinn-bhalgain. 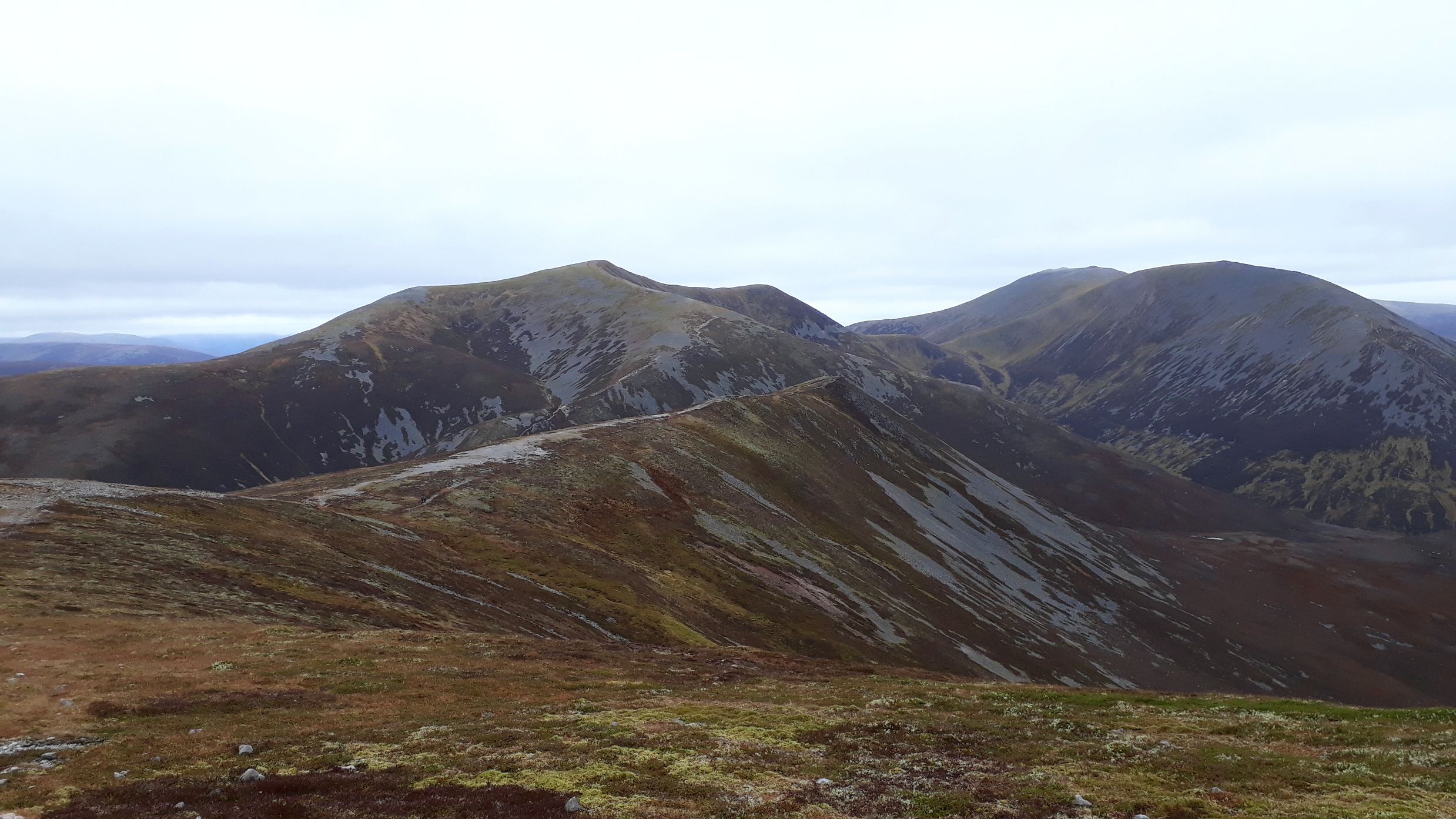 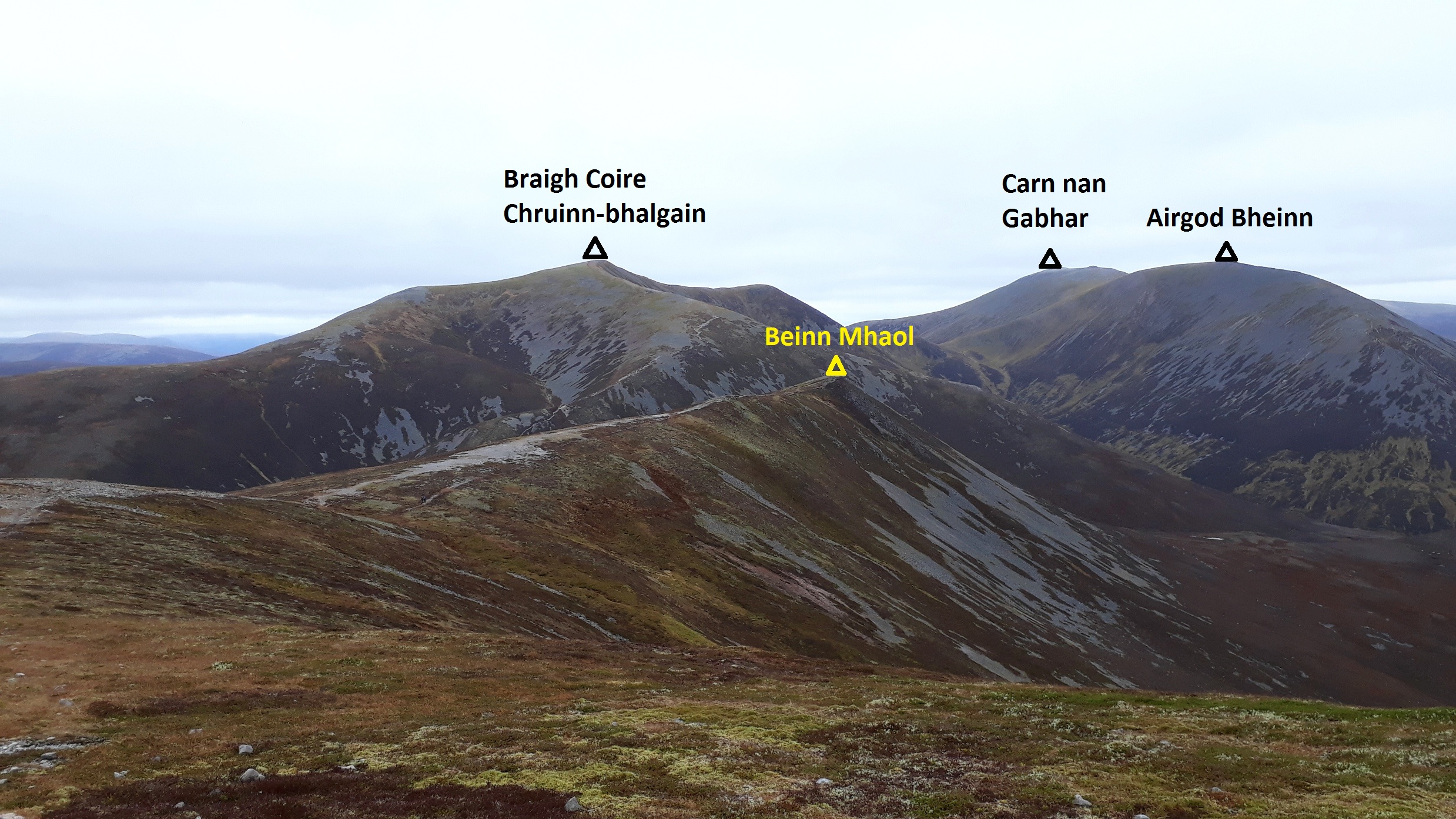 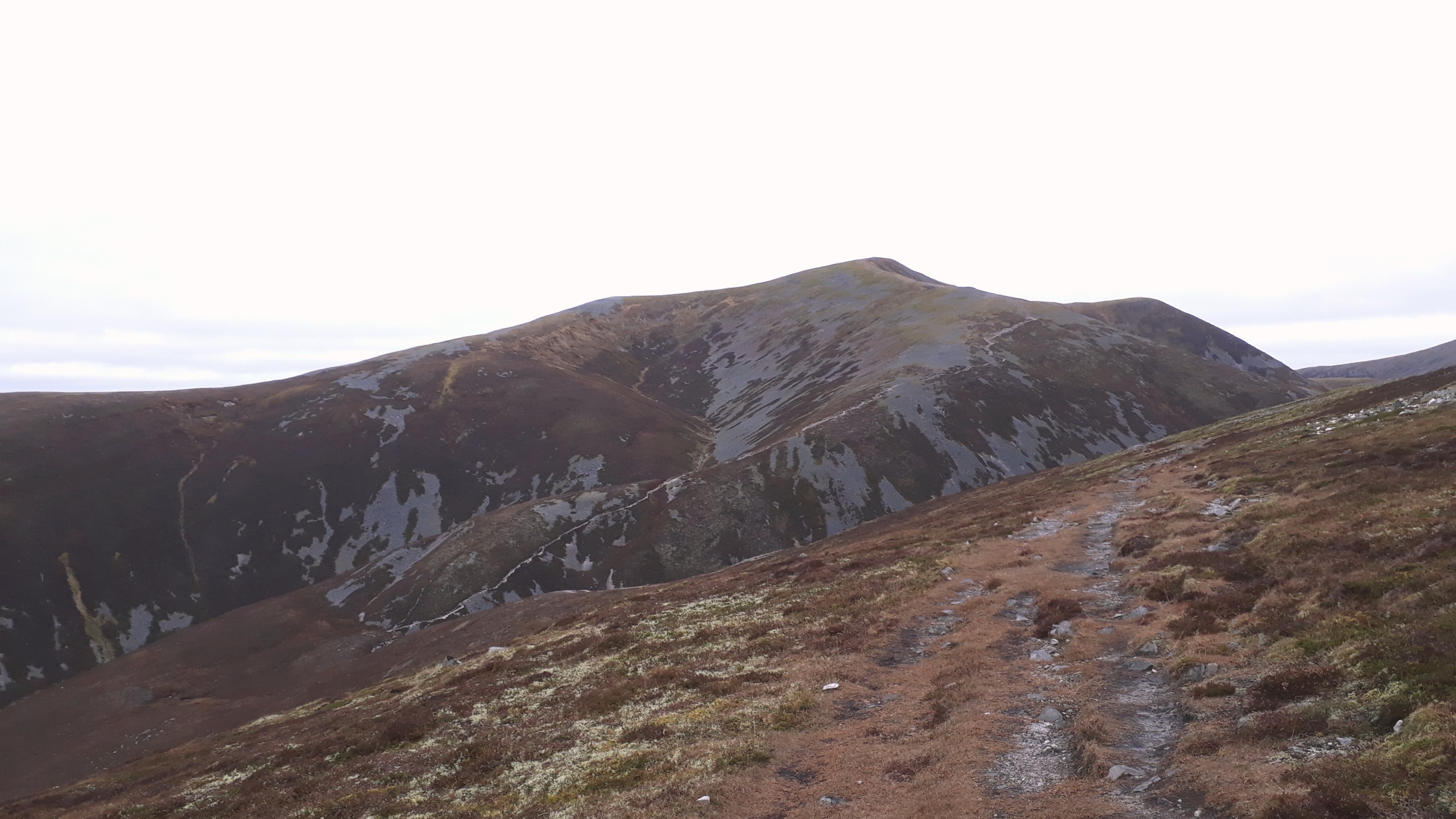 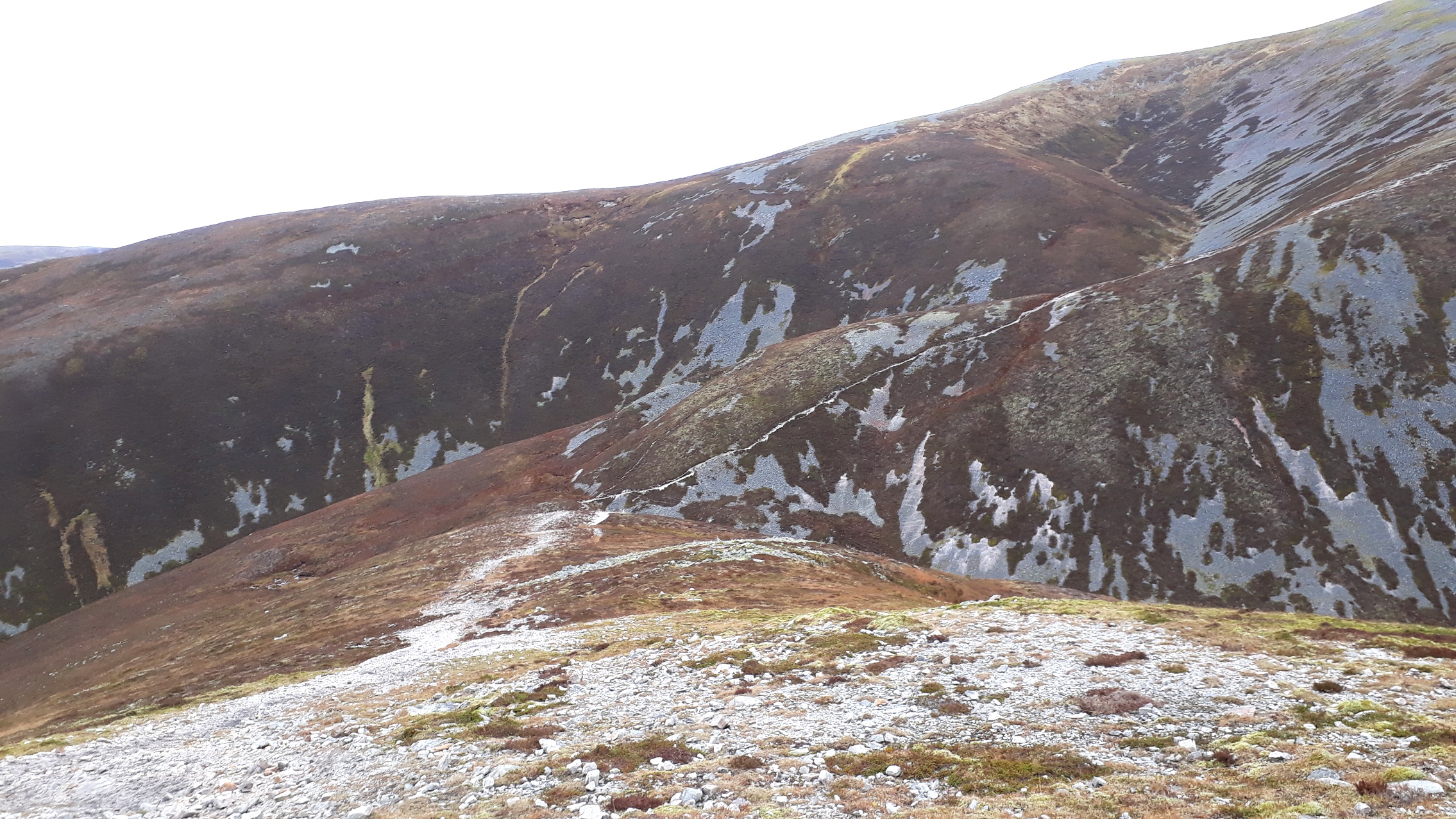 ...followed by another flog up to the summit. 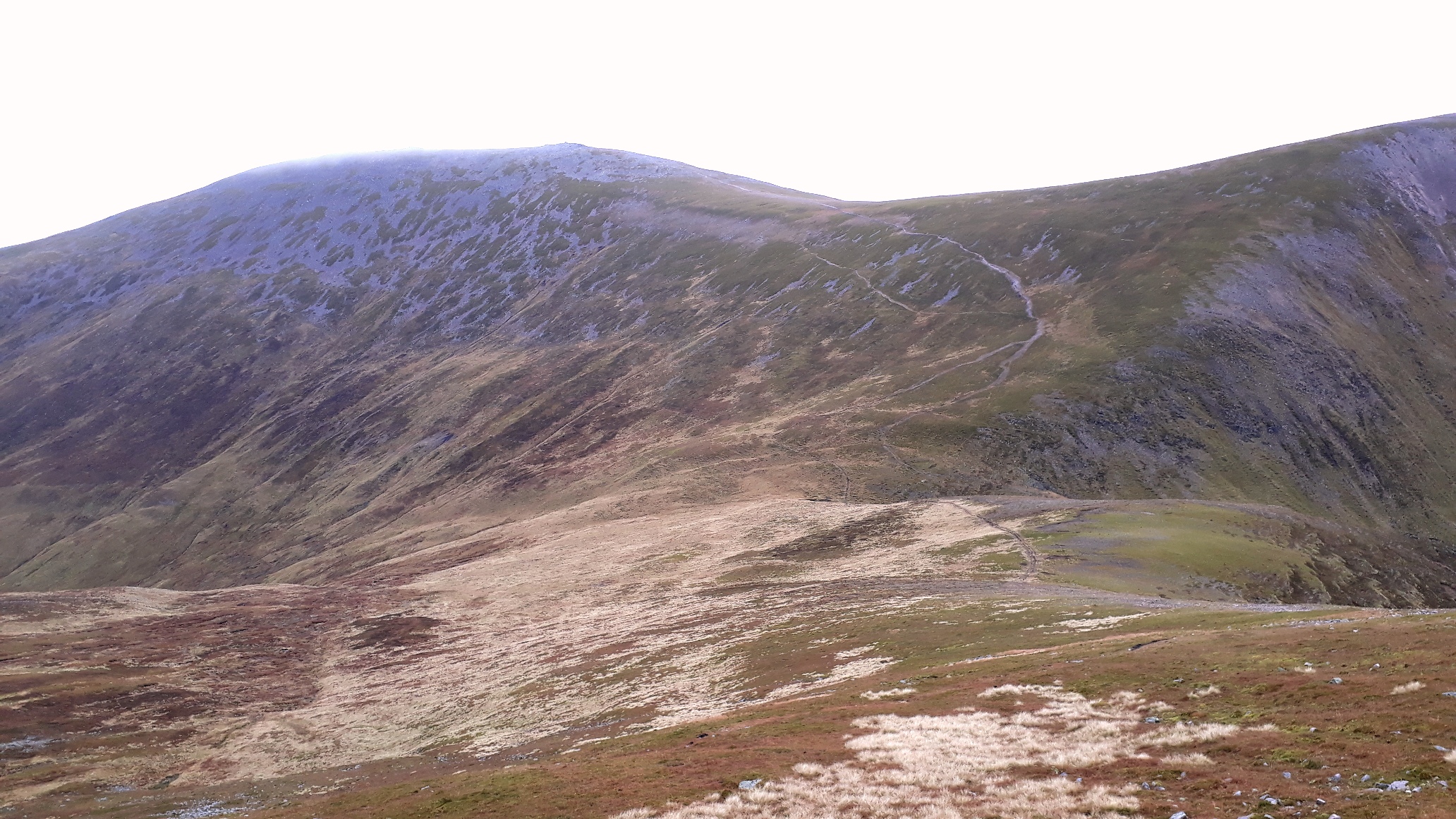 20201015-133941. I quickly get going again, and shortly the bealach comes into sight. Once again motorway dimensioned paths up the face of the hill dominate the picture.

It's only about 250m of ascent, but once again it seems to take an age to get to the top, and all the while, slowly but unmistakably, the mist is descending... 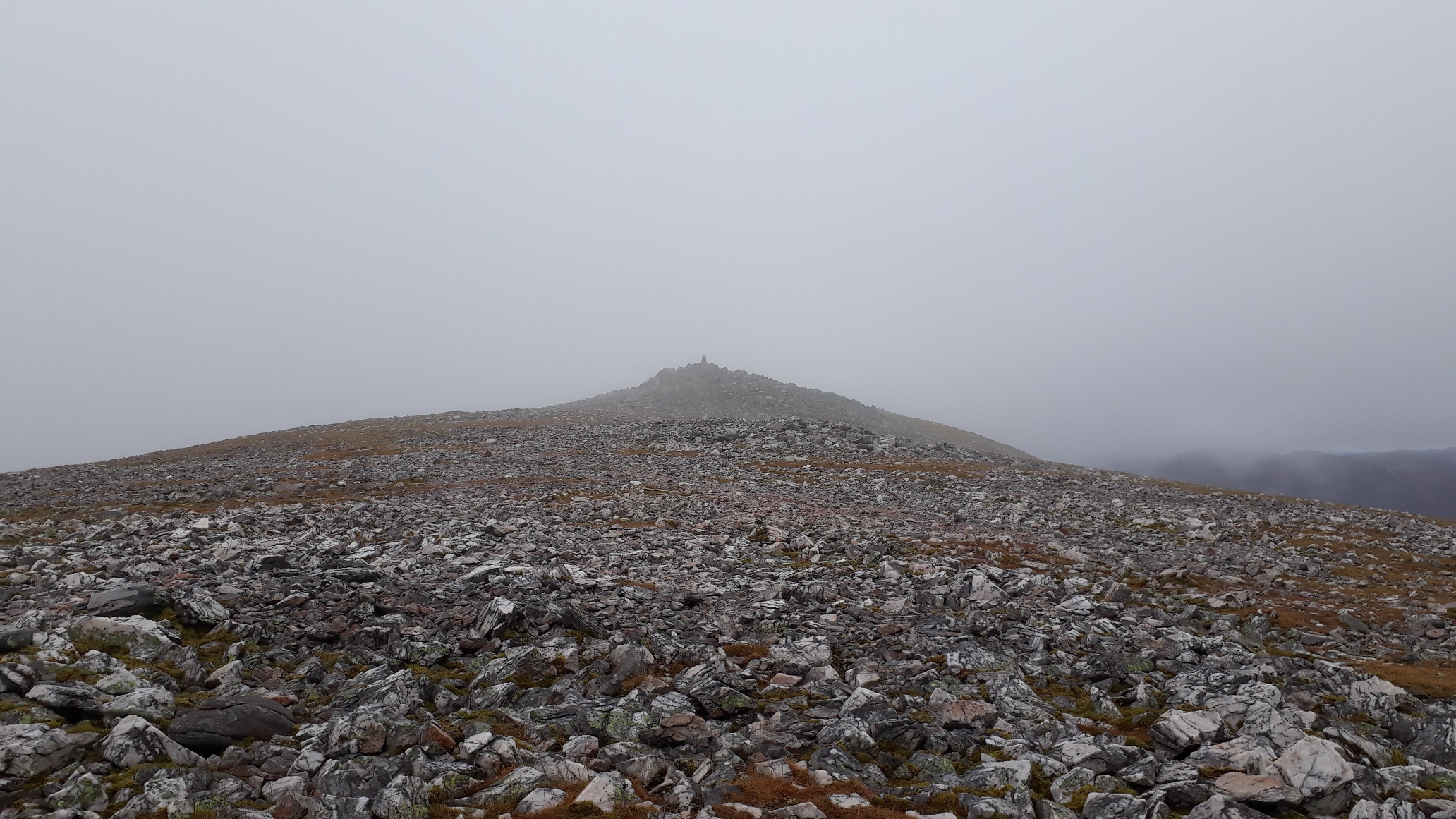 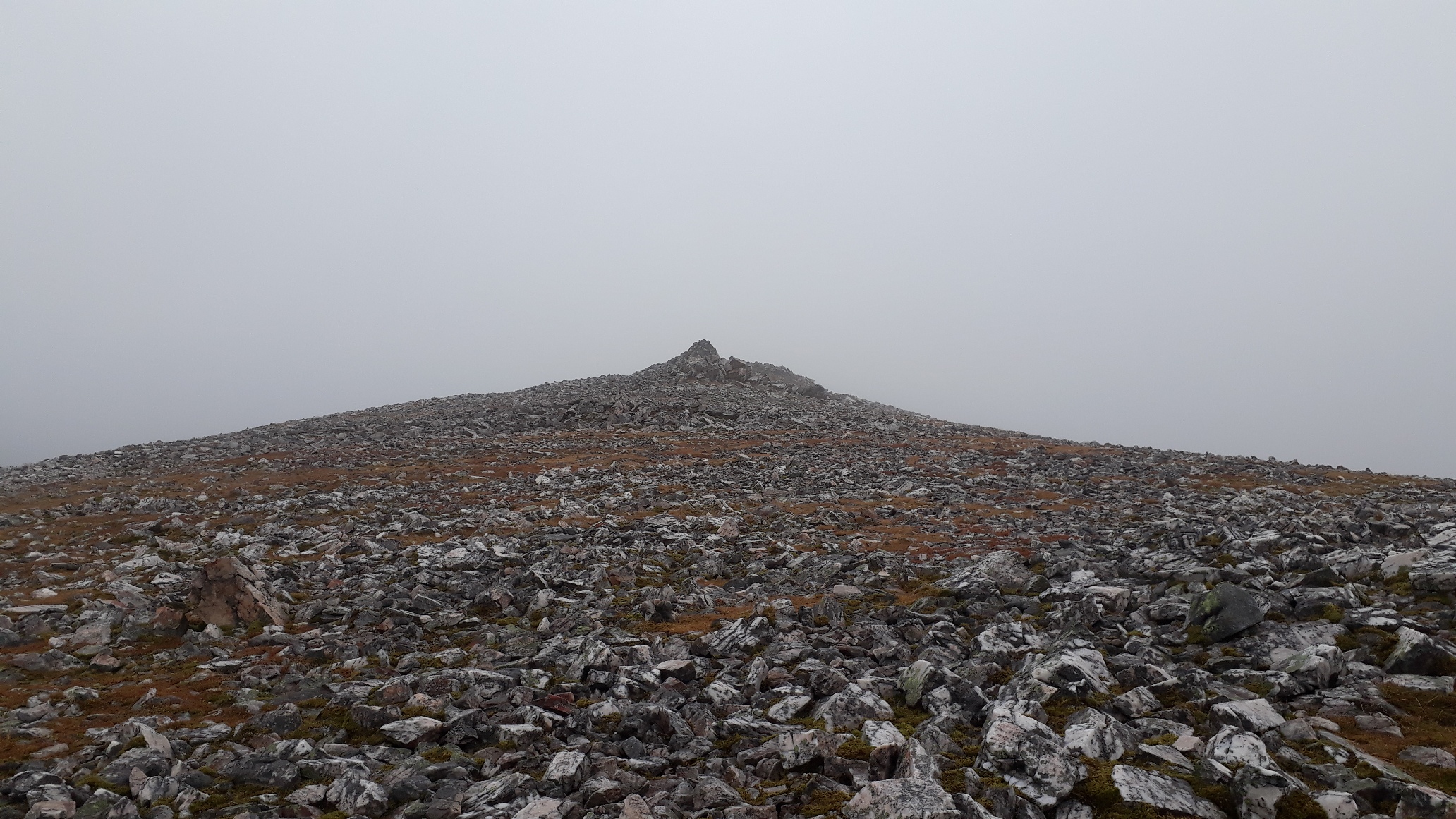 And just as I get to the actual summit, the clag lifts a few metres above head height... 20201015-153003. Pano a bit further on, looking towards Airgiod Bheinn, which is where I'd have headed had I not spoken on my way up to Carn Gabhar to the couple who gave me the information from their friends about the supposed "good" path back via Bealach an Fhiodha. As per my comment at the start, it is actually very wet and muddy for most of the way down the glen - and in trainers I do get wet feet (but that's my own fault, of course); and the going is inevitably slower than might otherwise have been expected.

By way of consolation, my travails are accompanied from top to bottom of the glen by roaring stags. I have my binocs with me, so I get one particularly loud one in view in the hope of seeing a comer to his raucous challenge. But it must be as fearsome to other stags as it sounds to me some 3-400 metres away. In any event, the stag remains alone!

As I get towards the end of the glen, I see what looks like a very well-made track in the distance, which I suppose must have been what the couple's friends had been referring to. 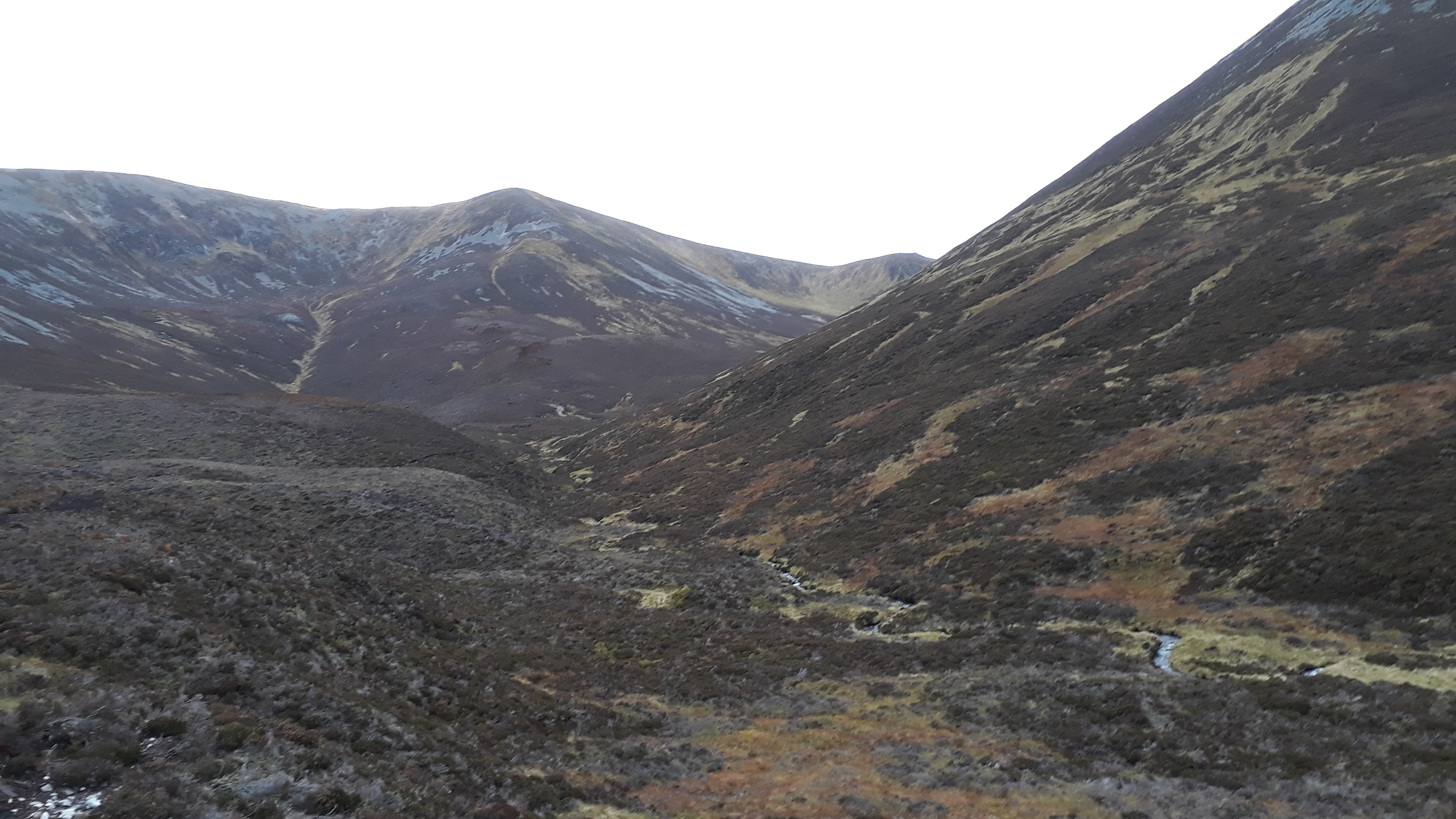 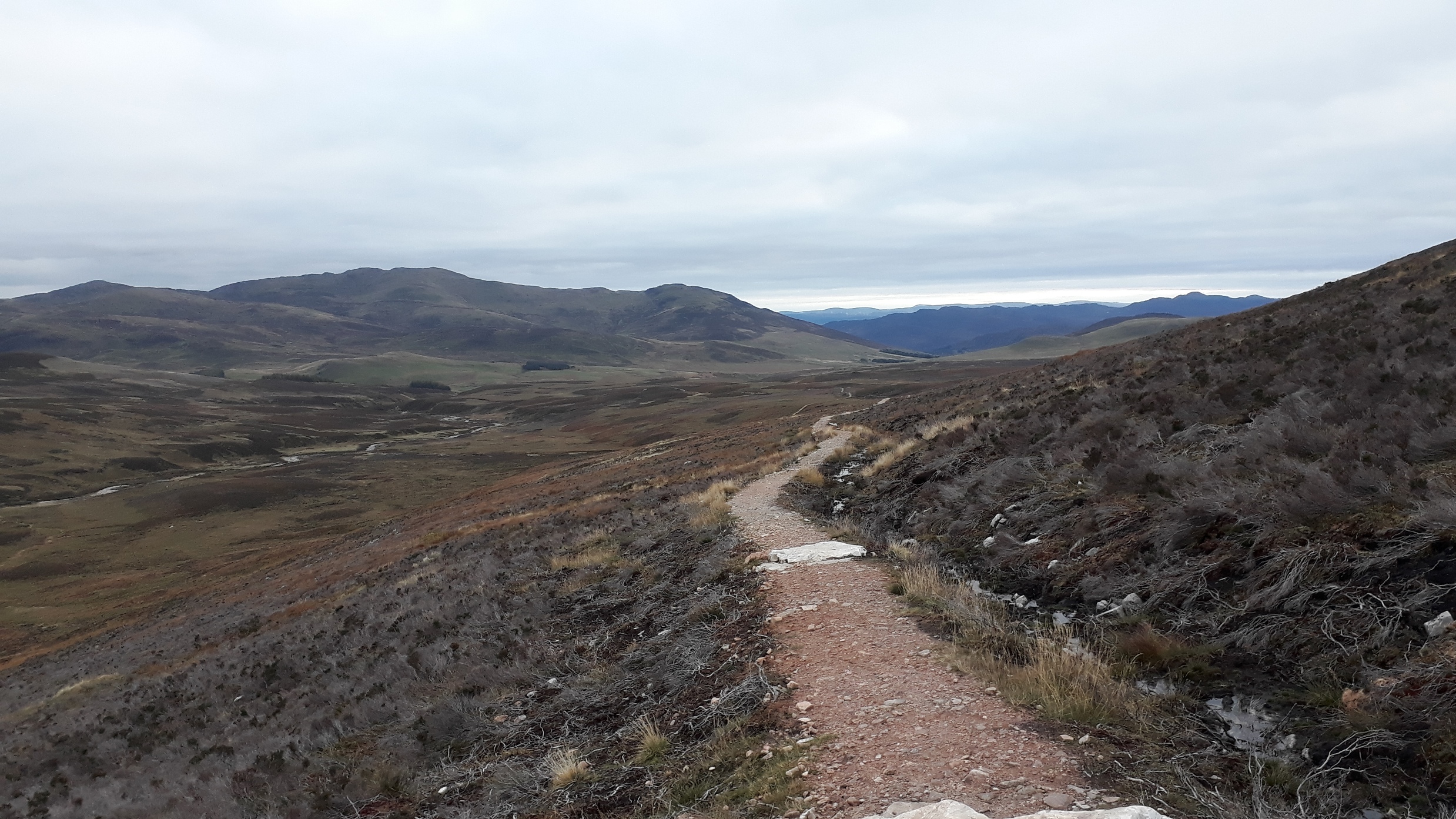 I'd be intrigued to know how one can avoid a long bog fest (apart from doing the walk in winter)...??? 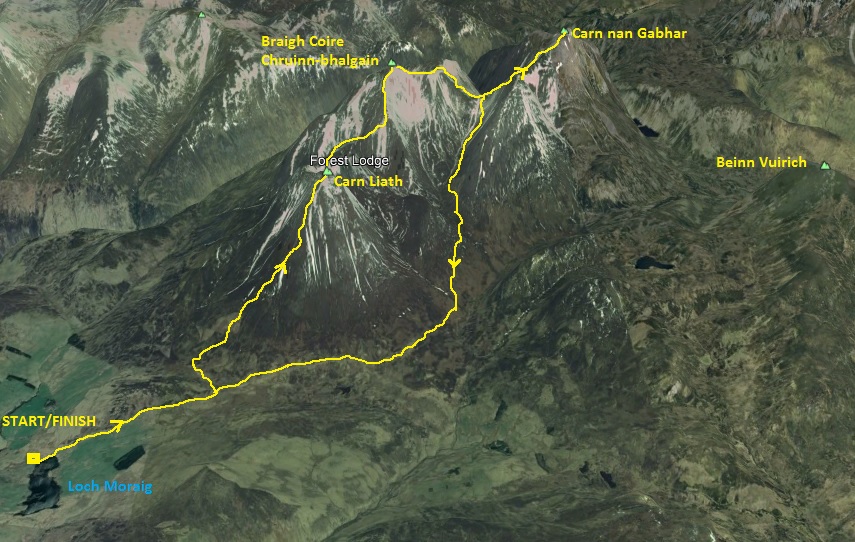 
Farrago on the Hill